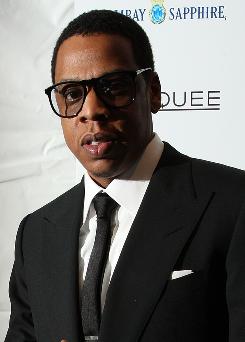 Jay-Z offers some of his own songs for the game and also teams up with Eminem for a track.

By Mike Snider, USA TODAY
The upcoming DJ Hero video game just landed two heavy hitters as MCs: Jay-Z and Eminem.
Both rappers are bringing their music to the newest offshoot of Activision's successful $2 billion Guitar Hero franchise. The game, played with a turntable-shaped controller, is due out this fall for PlayStation 3, PS2, Xbox 360 and Wii (no price or rating yet).

BLOG: Eminem and Jay-Z got game
A special edition comes with the rappers' new greatest-hits CDs, possibly including previously unreleased tracks, plus an advanced version of the controller, a DJ stand and metal traveling case. Jay-Z and Eminem will serve as consultants to Activision and the game's developer, FreeStyleGames.
The complete list of tracks the rappers are providing is still being worked out. Jay-Z plans on including Izzo (H.O.V.A.) and Dirt Off Your Shoulder for sure. Also possible: tracks from his in-the-works Blueprint 3 album. "I have a ton of content, I just need the pipeline," he says. "I love the freedom of (DJ Hero). I could wake up tomorrow morning with the idea for a song and call the guys at Activision and start working on getting it out."
FIND MORE STORIES IN: Yahoo! | Jay-Z | Eminem | Activision | David Bowie | Special | Beastie Boys | Blondie | Izzo | Gorillaz | 50 Cent | KRS-One | Dirt Off Your Shoulder | DJ Shadow
Eminem is more cryptic about his contributions. "I don't want to give away any surprises yet," he says in an e-mail interview. "DJ Hero will include my music, and I'll be providing additional material as downloadable content by the end of the year."
Players use the features on the game's controller — a rotating record platter, sampling buttons, an effects dial and a cross fader — to match streams of song tracks, create effects and add personal touches to score points.
"You actually get lost doing it," says Jay-Z, who has played the game. It creates "a DJ's universe," he says.
In addition to single-DJ action, two players can compete or play cooperatively. Special mixes will let players use the Guitar Hero controller. The game spans hip-hop, electronica, R&B, soul and pop/rock with songs by 50 Cent, Beastie Boys, KRS-One, Blondie, N.E.R.D., Gorillaz and David Bowie. Superstar DJs such as DJ Shadow, DJ Z-Trip and DJ AM will contribute, too.
"You are going to get over 100 songs from 80 artists and 80 brand-new mixes that have never been heard before, including one with Eminem and Jay-Z (together)," says Guitar Hero president and CEO Dan Rosensweig.
"This is a game I can see myself actually playing," Eminem says. "DJ'ing is fundamental to rap music, so it's a great fit."

Source http://www.usatoday.com/life/lifestyle/2009-05-28-dj-hero_N.htm?se=yahoorefer
Click to expand...
I think this game will be very interesting to see when this game sees light cause i know i will purchasing this game for sure!!!!
J

Only the third thread with the exact same quote today.