Synergy; not the sort of word you're most likely to see fronting a preview of a high tempo and well buffed flight combat game, but one that strikes to the core of what Tom Clancy's HAWX is about. The latest addition to the ever expanding universe first spawned with Rainbow Six, its air-bound fire-fights are as far removed from the shadows of Splinter Cell or the war-torn cities of Ghost Recon, but one that still manages to neatly intersect and supplement the universe that Ubisoft's been expanding upon since 1998. 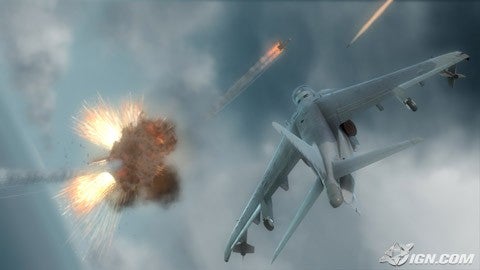 Explosions are done well - a good thing seeing how there's so many of them.


There's nods and winks to its stable-mates throughout the game, be it the familiar high-end near-future technology that powers the interface, or in more explicit links; the opening cinematic has the player coming to the rescue of Captain Scott Mitchell, protagonist of the Ghost Recon games. It shares with End War the voice recognition technology, with shouted commands working just as well in the confines of a jet fighter's cockpit as it does on the expanses of a modern battlefield.

HAWX's story likewise bears a strong family resemblance to the other properties attached to the Tom Clancy brand; a tale that's overwhelmingly thick with political intrigue, its focus is the twisting fortunes of David Crenshaw, a fighter pilot who turns his back on the US military to dip his toes in the murky waters of Private Military Companies. What follows is a quick fire trot around the globe, as the skies of eighteen far flung locations play host to a succession of dogfights and aerial engagement. With the Tom Clancy serie's taste for acronyms and twist upon twist, it's likely to be typically impenetrable fare.

But the similarities go beyond skin deep, as HAWX attempts to take the streamlined tactical gunplay of Ghost Recon and Rainbow Six to the air. Ubisoft Bucharest, previously responsible for the frenetic Blazing Angels titles, has expressed a desire to make a game that plays like a first person shooter in the sky; and after an extended hands-on with the game we can report it seems to have fulfilled its ambition. 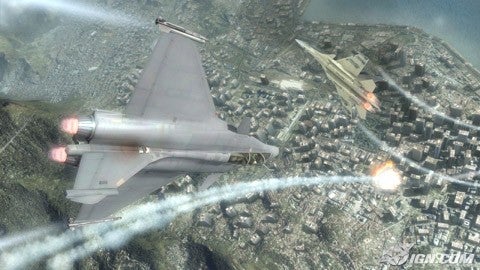 The switch to dynamic third person is thankfully unobtrusive.


Lying somewhere between the more dramatic extremes of Ace Combat and the exacting demands of more serious minded PC titles, HAWX occupies a middle ground that proves to be uniquely satisfying. A number of neat systems help facilitate the faster pace; firstly, the Enhanced Reality System (ERS, acronym lovers)is on hand to highlight a path to intercept nearby foes, overlaying a digital tunnel on the HUD for the pilot to glide through in order to get a clean shot on the rear end of aircraft, or in one instance to allow player. An antidote to the problem sometimes faced by genre newcomers who find themselves performing pirouettes in pursuit of a target, it's an optional feature but one that's more than welcome.

Proving more dynamic is the ability to switch handling assistance off. With a swift double tap of the throttle, complete control is given over of the airplane, the camera switching to a cinematic third person view to accommodate the acrobatic twists the mode allows. It comes into its own when under heavy fire, enabling players to perform deliberate stalls in extreme evasive manoeuvres. 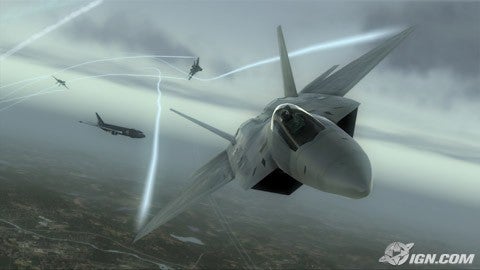 Plane models are crafted with enough detail to satisft aero-nuts.


Basic control itself is a comfortable fit, if a little snug, with every part of the pad utilised to pilot the craft. It's obviously a little busy thankfully never confusing, the option to use voice command obviously lifting some of the burden from the pad, all of which translates into some peppy handling across each of the 50 planes on offer, be it the relatively lumbering A10-A Thunderbolt or more nimble F22 Raptor.

Each dogfight is carried out with lurid visuals, with HAWX handsomely matching the ambition when first revealed. Though the endless blue skies obviously present something of an unchanging backdrop, the surrounding details have been rendered well, be it the thin wisps of cloud cover that greets pilots at high altitude, or the finely featured ground environments, with industry leader GeoEye providing maps which have provided the textures for some 12,000 square kilometres of space to explore. The variety of terrain is equally impressive; our preview build in its small handful of missions took us from the bleached expanse of the Middle East to the urban sprawl of Chicago, with a detour to a Caribbean dusk proving how versatile the game's engine is. 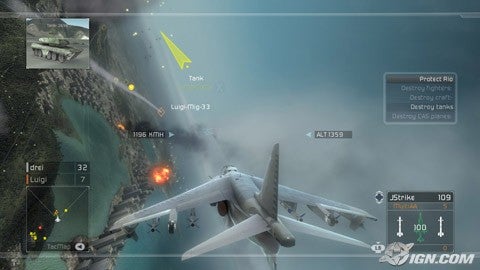 Third person camera is default, but an excellent in-cockpit option is available.


Equally varied is the mission structure, with the objectives we were witness to ranging from protecting an oil refinery, escorting Air Force One and an all out urban assault. However, what's likely to breathe most life into the campaign is the drop-in co-op, available throughout the game. Its integration is seamless, and proved sturdy enough in the four player networked games we were witness to. Indeed, many of the game's objectives tend to reward co-operative play, with management of the battlefield both on the ground and in the air imperative to success. Which is all well and good when there are four players in sync with each other over a headset, but our one concern is that there's not enough incentive to inspire co-operative play beyond tallying up the kills at the end of a mission, as it's all too easy to become oblivious to your allies.

This minor gripe aside, there's every indication that HAWX will be a welcome shot in the arm for a genre that's been grossly under-represented, with enough ideas of its own to ensure its a worthwhile opponent to the previously all-conquering Ace Combat. Refreshingly, it looks as if there's more to this latest addition to the Tom Clancy family than mere brand extension; expect a game that's both polished and adept when it's released at an unspecified date in the first quarter of the year.
Click to expand...
I guess I'll give a chance :|
G

I'll be looking forward to it aswell. Is there a joystick out there for the PS3 we'd be able to use with this game?
D

If there is I don't know about it.
D

No weather effects at all?! :shock: Bit of a shame.

I'm so looking forward to this I tried Endwars demo out and I was seriously impressed with the voice feature it was smooth and didnt get me to repeat more than twice if I went to fast because I remembered the order lol hopefully it will use the same controls as Ace Combat inverted up & down with the left stick and roll/raw with the right stick etc.
T

This is one of my forgotten titles. It seems pretty cool. The 4 player co-op sounds pretty cool, hope it works as seamlessly as they say. Thats the coolest part of Burnout to me the seamless online connection.

Anyone know how many players the competitive supports?
C

[QUOTE="GOA510, post: 0]I'll be looking forward to it aswell. Is there a joystick out there for the PS3 we'd be able to use with this game?[/quote]

There is now suckas!

Glad to see there will be a in cockpit view. Will probably get this.

Home console flight simulator and air combat games just got a bit easier to control. Just in time for upcoming titles like Tom Clancy's HAWX, Saitek is introducing the Aviator, a flight stick fully tested to work Xbox 360 and PlayStation 3 games. That said, Saitek claims the Aviator will also perform well with the Blazing Angels series of games released earlier on.
Available for both platforms, each Aviator will also have the ability to work with PC games as well, doubling the compatibility. The Xbox 360 version (pictured) not only has the familiar silver Xbox guide button, it also has room for a headset connection in order to chat with other players during aerial dogfights. The PlayStation 3 Aviator features a Home button for access to the cross-media-bar while playing.
Both Aviator flight sticks are scheduled to ship this month for $50.
Click to expand...
Source
You must log in or register to reply here.
Share: Facebook Twitter Google+ Reddit Pinterest Tumblr WhatsApp Email Link
Reply