Have to move but sadly the only place I found is slightly outside town which means no Broadband/Cable. Which I don't understand since I'm only like 30 ft from the road.. but whatever lol


Anyways, how does LTE Internet compare to Cable? I've always had Cable internet but where I'm going it's "no internet" or LTE, apparently. Like to know what to expect, thankfully I got some fixing up to do to keep me busy for awhile.. I guess.

I tether my phone with unlimited data to my computer and get about 25-30 Mb down and 10-15 Mb up. My cable internet should be faster but my ISP is a giant piece of shit and I usually get 2 Mb of the 75 Mb I'm paying for.

You ever notice any problems when you tether?

No idea. LTE reliability is different everywhere. I don't usually have any issues, though. I guess you'll find out. >_>
P

Only in certain areas. All the big cities have gigabit fiber internet for like 70-80 a month. Can't wait to move to one of those cities.
B

Yeah I guess I forget how big the country is. I'm paying about £40 a month and I get unlimited cap with 120Mb download speed. I almost feel as if I want more speed again :lol:
P

Yeah I live way out in the sticks. No internet worth a damn here.

Hopefully this LTE won't be lame as shit, won't find out till the next few days/next week (yay for middle of the week holidays)

You know what pisses me off though? For $115 at my current cable ISP I could get a 250 connection with NO CAP. Damn cable companies not going 30 ft or so outside of town. (Can see the road from my window ffs lol) >.>
P

[QUOTE="Fenix, post: 6458524]Hopefully this LTE won't be lame as shit, won't find out till the next few days/next week (yay for middle of the week holidays)

You know what pisses me off though? For $115 at my current cable ISP I could get a 250 connection with NO CAP. Damn cable companies not going 30 ft or so outside of town. (Can see the road from my window ffs lol) >.>[/QUOTE]

Well you could get pissed knowing that less than 2 miles down the road they offer decent a no cap dsl for less than what I pay for a 5gb cap. Mobile broadband usage allowance is terrible here in the US.

I use LTE as my main Internet, no problems here, but this is Sydney Australia.
I use a full dedicated router the company gave me. Can be quite fast at times.
Those little hand held 4G things are not as good.

I have been on cable connection since the start of 2011. We were limited to DOCSIS 2, and could only get 15Mb/s down 1.5 up. That is a LOT better coming from a 3g cellular connection we used before moving to where we are now.
They recently upgraded the system here to DOCSIS 3, and we are able to get 120Mb/s down and 10Mb/s up.

My LTE (Verizon), was used for large file downloads and uploads while on the limited cable speed we had. The average speed was 30-Mb/s down and 10-20Mb/s up. Depends on signal, cell site congestion mainly. I used an iPhone 5, 5s, and 6, for the connection. Either via wifi tether, bluetooth tether, or USB tether. It was very reliable. Again, it'll really be up to the signal strength and cell site congestion. All our cellular lines are unlimited. 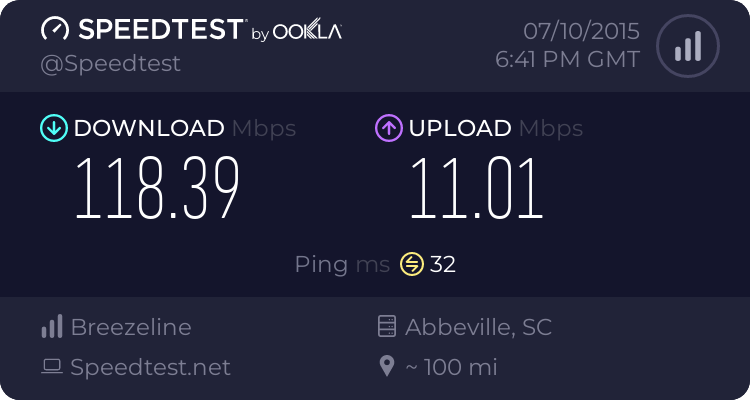 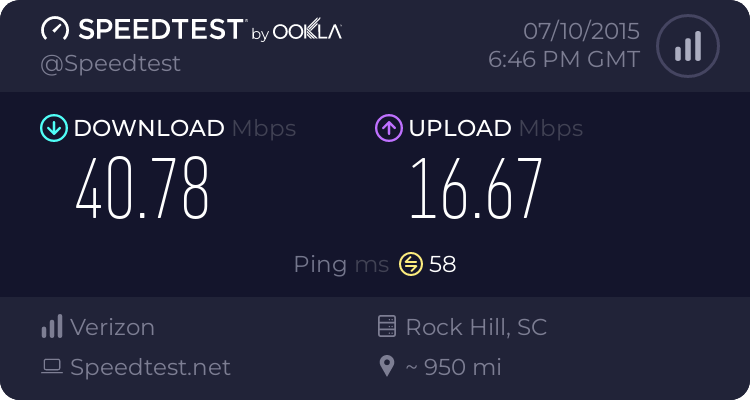 This is at the house, inside...

Again, the signal and congestion is killer at times. I've been able to get close to 80Mb/s down and 30+ up.
E

I am looking forward to Google Fiber being finished in my area. I live in the greater Charlotte area and am currently on a lousy 50mb/s connection for about $100 per month. With Google Fiber, I will get 1gb/s for around the same price or less per month. I will also have a truly unlimited cap and since it's fiber, I won't have to share that bandwidth with other residents. This will be a dedicated line, just for me and whomever I allow on the network. Google is going to shake up this industry... hard. I for one, am looking forward to seeing the likes of Time Warner, Verizon, AT&T and Comcast sweating it out and actually engaging the consumer with pro-consumer business practices. These assholes need to pay up all the taxpayer revenues they've stolen over the years with actual progress we can measure.

If the gigabit fiber was being deployed more, then the industry would definitely have to wake up and catch up... that's just not going to happen any time in the near future. They won't ever have to pay a single penny back because they buy politicians.
J

#18
the most important purpose why it won't be a outstanding concept to go beforehand and ditch your cable or DSL company for 4G mobile from a company like Verizon wireless are the facts caps. Now that Verizon wireless has completed away with unlimited records, there aren't many 4G-capable companies to be able to permit you to banquet on the trough of loose bandwidth.

because you specifically noted the usage of Verizon wireless' 4G LTE network on your number one domestic net connection, you ought to be aware of the agency's new tiered information plans. The beefiest bundle you can join up for is 12GB/month with tethering for $a hundred/month (including 2GB and $20 greater for tethering.) For each 1GB over that 12GB you operate, you may pay a further $10.

I do not understand how in the US and in Canada you can not get the speed's your are promised (on cable services) because I'm assuming the cable goes direct to the house and data is not going over copper lines like on BT infrastructure in the UK? Unless the fibre stops before it reaches somebody's properrty
You must log in or register to reply here.
Share: Facebook Twitter Google+ Reddit Pinterest Tumblr WhatsApp Email Link
Reply