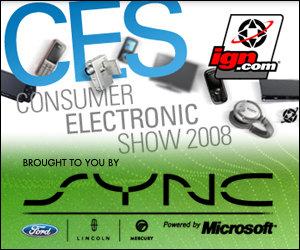 January 7, 2008 - At the 2008 Consumer Electronics Show in Las Vegas, Sony had a special visitor at its booth as Konami was on hand to show off a playable demo of Metal Gear Solid 4. This is the same demo that was on display during the 2007 E for All expo in Los Angeles, so there weren't too many revelations made during our demonstration, however, we were able to get some hands on time with the game and many of our worries were put to rest.

One of the features found in Metal Gear Solid 4 is that the game is fully compliant with the new Dual Shock 3 controller, so we were able to feel every shot that we fired and every bullet that hit us in the game, and this could be a solid indication that Sony is back on track with the force feedback functionality that it's current home console is missing.

Another thing that we noticed is that the game looks absolutely stunning. Everything is rendered in fine detail from the war-torn middle-eastern city that the level took place in, right down to the individual hairs on Snake's 'stache. When we asked whether or not the game will be able to run at 60 fps at 1080p, Konami said that things were still being optimized and they can't promise anything, things were on the right track.
Click to expand...
http://ps3.ign.com/articles/844/844078p1.html
D

ah crap I thought this where coming to the psn store :twisted:

This is one of those days when wish i had follow journalism in college!
C

[QUOTE="DopplerEffect, post: 0]ah crap I thought this where coming to the psn store :twisted:[/QUOTE]

hah, no demo coming from this game. straight from ryan peytons mouth.
1

could it be on track! it might come out earlier than June 17th. if they are. sweet. can't wait for the call from gamestop
T

So many good games coming out this year with this game being one of the highlights I am just excited to get my hands on it!
D

MGS4 rocks!! I actually played that same demo from CES 2008 at the E for All Expo in LA last year it was sooooo cool! The lines though were really long.. wait times were at least up to an 1 hr. 1/2 got to play it twice!! It was cool.. The demo used all the new gameplay mechanics!! It also had DS3 rumble functions built-in..
P

What no demo that sucks but still cant wait for this game definitely one of the highlights of this year.
N

great footage!! This is the same demo i played i remember all the scenery and Solid Snake is once again is a total badass!!

That's awesome footage. When the guy went "Holy sh*t" i couldn't have put it better myself. It looks awesome even with YouTube's ****ty quality.
S

no one needs a demo to know MGS4 is GOTY, unless FFXIII actually makes it out this year.

Im completely on the fence with this game so if they dont release a demo they will lose possible buyers like me.
I know i could rent it but with a game this big i doubt i will ever find it not rented out.
L