Against a ticking time bomb and an enemy willing to die alongside it, you are the last Counter-Terroist alive. Footsteps muted, you tip toe into the bomb site as the steady beeping of the device creeps upon the silence, the microphone chatter of fallen teammates hushing to a panicked whisper. The last terrorist is here, somewhere, waiting for you as he gambles the clock. The bomb ticks faster, your eyes glue to the screen, your entire nervous system ready to react to the slightest hint of movement, every nerve ready to fire. Still, nothing. Where is he? Now -- there’s the bomb, its beeping intensifying, approaching a climax that can only end in defusal or death. Everyone’s watching! Make the decision!

If anyone tells you Counter-Strike is a “fun” game, then they have a very loose definition of the term. No, Counter-Strike is -- at least in its competitive form -- nothing but raw anxiety, and Global Offensive is the first iteration of the franchise to advertise this quality openly to the public. It’s a chance for a big change, a step forward in solidifying CS more as a sport and less as just another deathmatch bananza, emphasizing aspects that have always set the franchise apart from that denomination. Indeed, competitive matchmaking is finally here.

Although undeniably basic, the feature serves its ultimate purpose, allowing you to queue up and be in a pro styled match in just a few minutes. A complete 5 vs 5, 30 round face off on the franchise's most historic maps, that for both newbies and rusty veterans can prove addictive, easily a night's worth of adrenaline. You’ll get an initial ranking which fluctuates based on your win/loss ratio, similar to the common ELO system implemented in chess and other PC games like League of Legends or Starcraft 2. Strong suspension penalties discourage rage quits or otherwise less focused players, CS:GO duly warning you to set aside at least an hour of your time before committing to a scrimmage. Talk about intimidating.

Of course, your introduction to CS:GO needn’t be that intense. You can join more casual servers offered by Valve, or browse through what’s privately hosted by other players, usually a variety of user modified maps and deathmatch modes. Sniper rifles only and gravity turned off? Go for it. Most popular though is the stock game itself, classic bomb defusal or hostage rescue where you only get one life before heading to the bleachers to spectate the rest of the round. These servers often attract larger numbers of players and tend to serve as practice lounges, providing an atmosphere of self betterment where people are more anxious to perform well individually than stress over the completion of team objectives. 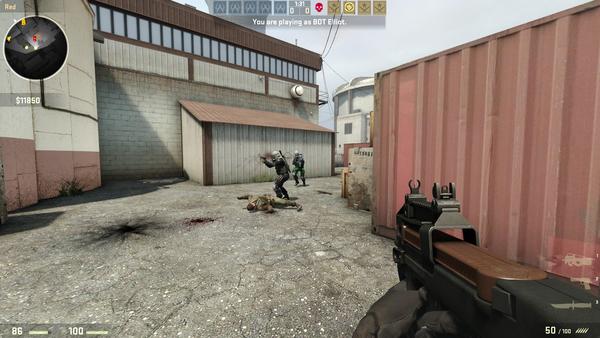 At this level of play CS:GO is essentially gun pornography. You can try your hand at a huge arsenal of nearly 30 different kinds of pistols, shotguns, rifles and smgs, a variety of violently shaking gunmetal each with unique levels of recoil and bullet spread to compensate for. There isn’t a weapon left untouched by the game’s tight feel, where guns like the AK-47 have both the power and sound of cracking ferocity to really ring fear throughout the map. Highly accurate in its first shots, a clean kiss to the head is enough to end it, but missing that initial burst renders your aim unwieldy. And yet in this very situation a better player can regain control of the weapon, reigning in the recoil, dragging and swerving the mouse to get the bullets to behave how he wants them to.

Such complex personality of each gun can be frustrating to get used to, and certain habits from other shooters can interfere in the learning process. Firing while moving will demolish accuracy, for example, and you’ll want to instead adopt a strafe and stop style of play, or crouching and attempting to shoot more controlled sprays. Missing out on seemingly easy kills is all part of the learning process, where every attempt is a miniature game in and of itself, one of self perfection and an endless desire to be faster, more accurate, and more controlled than before. Indeed, CS is really all about gun control, and beyond that it’s fundamentally very basic and easy to pick up. Given the recent dynasty of other shooters with heaps of features, however, it may be worth explaining CS’s straightforwardness.

To start, Counter-Terroists (CT) and Terroists (T) spawn at opposite sides of the map with some starting cash. There you buy gear within your budget and try to escort the bomb carrier to plant at one of two bomb sites, or if you’re CT, prevent that from happening. Everything is available to everyone, there are no perks or experience points, no unlocks or kill streaks -- it’s just you and your rifle, clean and simple, no iron sights or (gasp) health regeneration. So if you get slapped down to low hp you’ll have to adjust your play accordingly, it’s all part of the thrill.

New recoil patterns to master create a new feeling game for everyone, though, grenades also seeing a complete rework. The typical frags having a stricter blast radius that require smarter guesswork from the thrower, and smoke grenades are denser than ever, effectively screening your team’s movement through key positions. A cheap decoy grenade can send opponents into a panic before they realize it’s a fake, while more controversial is the new molotov that bathes an area in flame, thus forcing out enemies from valuable cover. It’s expensive, but good placement of the fire can completely shut down a choke point for some time, utterly halting more aggressive moves from the other team.

Such a moment can occur because of some superb map design, which is what really dictates the pace of this kind of shooter. If the Terrorists plan to raid the ‘B’ bombsite on the Dust2 map, for example, the Counter-Terroists will meet them right as they throw their first first flash bangs. These confrontation timings are near perfect, and the variety of encounters each map offers are fine tuned to suit varying team strategies. Rushing a bombsite is a team choice, after all, and depending on how the defending team reacts to certain strategies, it’s smart to adapt accordingly. Terroists can instead work that ‘B’ site slowly as a distraction while sending the bomb carrier off to the ‘A’ site, for instance. There he may be able to sneak in as the enemy rotates their defenses. 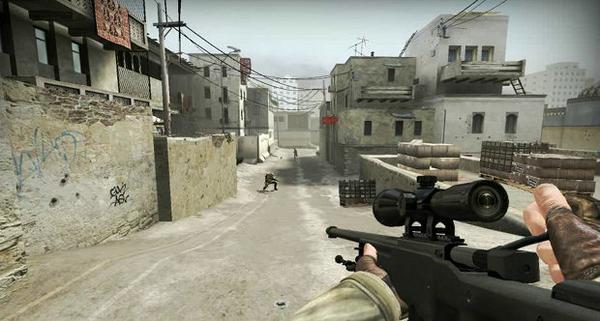 Throw the money system into this competitive habitat, and you get a round to round series of extreme drama. If a team decides to buy expensive weaponry, like the AWP rifle that kills in one shot above the waist, it’s really an all in on their part. Losing the round not only means less income, but giving up a powerful gun to the enemy team who will typically grab it off your corpse and turn the tables. It’s one of the reasons why a gun like the AWP is so iconic to the franchise, it’s rumbling blast thundering across the map, an extreme display of power that speaks to the confidence of your purchase, warning others to keep their heads down. And as you rock the bolt action back after each shot, you’re reminded how important it is that you succeed -- that you don’t miss. And whether it’s a glock, submachine gun, or an M4A1 rifle, an individual always feels this pressure, knowing that one player can single handedly shut down an entire team’s plan, no matter how brilliant. That learning curve is truly endless, and the satisfaction never ending.

Which raises the awkward question as to why CS:GO is even here. Once you find your favorite version there seems to be little reason to relearn a new system, and it’s not like GO’s matchmaking trumps paid subscriptions to seasonal leagues and 3rd party organizers. But what’s important is that for newcomers, casual competitive players, and even retirees, GO is without a doubt the definitive version to jump in with. It may be nothing but opinion tossing, but the series has never looked so modern while still feeling so clean, avoiding the awkward visual stage that was Counter-Strike: Source. Adjustments to weapons and maps have been sensible, and constant patching continues to add to the game. If properly kept, Global Offensive looks to carry the best parts of CS culture into a new decade, an approachable gateway to what is perhaps the greatest team based, twitch based shooter on the market.

upmagic, I couldn't even come close to putting into words how this is exactly how I feel about CS:GO. Very few games make me feel this tense anxiety to do well and perform. To try and better my own aim, learn different equipment/weapons and to call out to my allies when the numbers get low. A game that truly immerses me into the content.

I didn't play much Source, my only other experience with CS, but GO is very fun.

I really enjoy the term "gun pornography". Just thought I should highlight that. And this has been indexed.
Last edited: Feb 27, 2013
K

Just an FYI if you quit a match in "competative mode" before it ends you will suffer a limited time ban before you can re enter a different match.
First offence is short but repeat offenders can be a week or more.

If play in casual then it doesnt matter if you rage quit.

Code:
I do own CS:GO but rarely play it, its just part of the uniform for PC gamers, everybody knows at least 1 person that plays counter strike.

a few years ago In CS:Source the F10 key was binded to quit the game I had Fun times telling noobs to press F10 to launch kill streaks