Framed for the murder of the empress he was to protect, Corvo awaits his execution from the prison cells beneath a corrupt, industrial era empire. The setting is fictional, of course, but huge draw distances lined with puffing smoke stacks on a polluted, yellow watered lakefront work a kind of realistic wonder with Dishonored -- the Unreal Engine 3 always full of surprises, it seems. And you’ll get to see plenty of it, as a resistance movement called the Loyalists have researched your personal history and have found it worth their while in breaking you out of jail, recruiting you, Corvo, as a tool to dismantle and return the throne to its rightful place.

After a lucid dream sequence where a mysterious harbinger grants you the power of the dark arts, the rebels add the finishing touches with an engineered mask, hiding the face of a wanted man. Slipping on the persona of a killer equipped with gadgets and magical spells, from here you’ll carry out the tasks deemed necessary to restore order. Neutralizing military officials, kidnapping, and undertaking cold blooded murders, you’ll serve as the Loyalist’s assassin and ace up their sleeve. Except, wait now, just a reminder -- you’re not supposed to kill people. 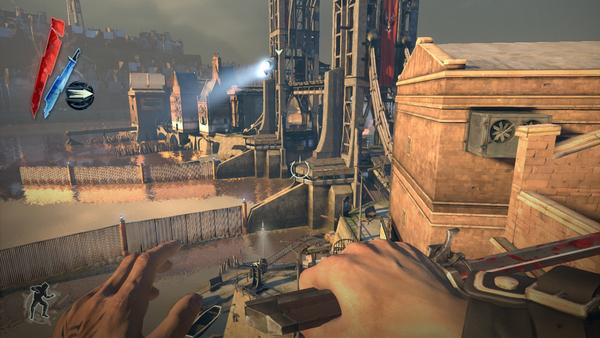 There aren't many missions but each has some very memorable set ups.
​
Dishonored’s moral dilemma feels both forced and unconvincing for a multitude of reasons, and not just because the feature is so whimsically explained in your first mission, briefly informing you that too much bloodshed will create a “darker” ending. A dual wielding, demon mask wearing, black magic conjuring killer from the shadows has been neutered by a pop up window, is what it feels like, because you see little other evidence of your moral bearing at any other point in the game. Corvo hardly interacts with the general populace, and aside from blaring speakers that report the news over the city streets, the only hint you’ll have to go by is a high or low Chaos rating at the end of each mission.

It’s a bit experience breaking, since it’s very easy to get pulled into the magnificently crafted cities and level designs, thus becoming constantly haunted by the question of whether or not you’re still on the path to your desired ending. Will you need to constantly load up save files should you end up panicking and beheading a couple of guards? Will you not be allowed to use the majority of the game’s spells and toys, almost all of which are unquestionably lethal? Well, the good and somewhat embarrassing news is that you can comfortably dispatch entire rooms of guards -- even kill some innocents -- and still be on the righteous path. It certainly only makes the ending public opinion even more fickle sounding, but there you have it.

When it comes down to it, though, both endings are disappointingly low budget and abrupt, which is less and less surprising as you return to the rebel’s home base after each mission and chat it up with your increasingly transparent superiors. They heap on a lot of praise, the usual “you’ve done more in one night than most men do in a life time,” or “you’re the bravest man I’ve ever met” sort of drivel. Most could guess the game’s later twist. The point is, then, that it’s easy to ignore the direction the game is going towards, and since Dishonored is all about making your own approach, it’s important to focus on tailoring the experience to your enjoyment. 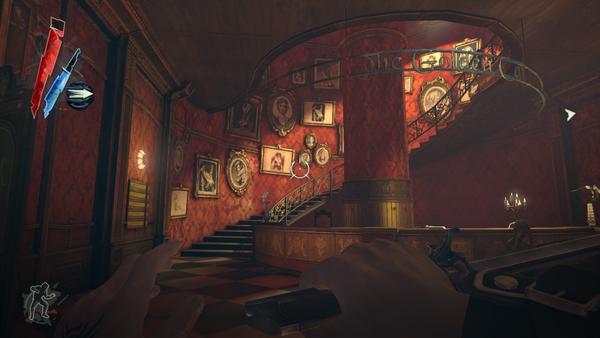 Creeping through places you don't belong can be exhilarating.
​
As a stealth game Dishonored is most impressive, namely for its scale. Interior designs ranging from run down dock houses to huge, upscale brothels are so detailed that the feeling of being a vulnerable, but deadly intruder is overwhelming. Desks are cluttered with personal effects and notes full of information about the game’s history surrounding the dependence on whale oil, advances in electrical technology, and underhanded dealings. Opening a door to hear a conversation between some party goers and a couple of guards then gives a serious sensation of anxiety, each danger you bypass sending you deeper behind enemy defenses and closer to a corrupt chain of command.

But Corvo is, nonetheless, a very capable individual. Beginning with a dash spell that warps you in and out of existence from point A to B will allow you to traverse rooftops, teleport atop chandeliers, or appear right behind unsuspecting officers. Use it to choke out an entire patrol before anyone realizes what’s happening around them, or if you prefer, warp immediately under a guard’s nose and puncture his throat before he can even scream for help. You may have to do that to a maid or service worker to prevent them from spotting you, as well, moments that really exemplify the potential brutality Corvo contains within him.

He’s remarkably badass, always equipped with his rapier and either a spell, ranged weapon, or deadly device in his other hand. Using magic irritates the tattoo on your left hand with light accompanied by a hushed, serpentine whisper from the dark passenger within Corvo, and such subtle effects convincingly convey you as a blinking, death dealing shade. In and out of existence to briefly cut the throats of those that stole your name away from you, then escaping as a phantom. That power, however, ends up pulling the curtains on Dishonored as a very fragile experience, depending how you choose to play it. 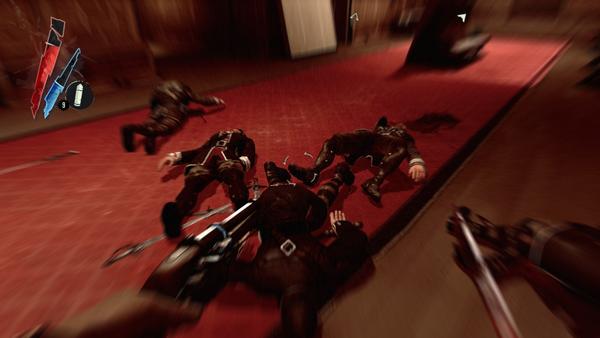 If you're spotted, this will often be the hilarious aftermath.
​
Quite honestly, you’re simply too well equipped and the combat too straightforward to truly warrant being so stealthy, and as mentioned, the moral compass isn’t polished enough to convince you otherwise. Nothing is in fact stopping you from entering some of the most heavily fortified segments of the game, dashing around like a madman, freezing time, and stabbing and shooting everything that moves. Even without the powers and upgrades, you can safely block and counter most attacks with just the sword. As an element of choice it is perhaps appreciated, but the balance is entirely broken, and the feeling of danger subsides when you realize you’re hiding from a very easy game. Even the hardest difficulty fails to mend it, mentioning that it will ration your supplies of health and mana potions but instead drowning you in them.

In other words, Dishonored playthroughs will vary player to player, but so will the quality. As an abusable system it certainly has its guilty pleasures, but staying true to the stealth aspect is where the real value is. To enjoy that it means sticking to a charade, being a good sport and playing your way around some very exploitable game design. Slowly working your way around patrols, choking out key lookouts, poisoning drinks and only snuffing the life from the most necessary of targets is how the game should be played. A fun, if disingenuous experience.

Great stuff!, adding it to the index now. Really cool to see you contributing here.
S

Wow, I really didn't know anything about Dishonored until this. I may be interpreting you wrong, but I feel like you enjoyed the game/play through, but at the same time didn't like it all that much. Unless you play it stealthy, of course. Another good read!
M

Overrated game. It was good but it was far from being the epic masterpiece that it was made out to be. I'd give it an 8.5.
C

Top review mate, excellent work on covering all aspects off the game

[QUOTE="radgamer420, post: 5980762]Overrated game. It was good but it was far from being the epic masterpiece that it was made out to be. I'd give it an 8.5.[/QUOTE] Epic isn't a word to describe it, but it is a great stealth game. The blink power is such a joy to use for traversing the environment.
D

Nice work broski! Rep+ coming your way. You've inspired me to get my reviews done sir! Thanks lol
U

thanks again guys, i think i might post one more from my reserves and then cool it for awhile as i get to some new pieces. how about a Final Fantasy? I have reviews for IV, VIII, and XIII ready to go!

@scud, yeah i'd say i came away from dishonored with a mostly positive reaction. the game is pretty broken but you can find your own way to enjoy it.
D

[QUOTE="upmagic, post: 5981162]thanks again guys, i think i might post one more from my reserves and then cool it for awhile as i get to some new pieces. how about a Final Fantasy? I have reviews for IV, VIII, and XIII ready to go!

@scud, yeah i'd say i came away from dishonored with a mostly positive reaction. the game is pretty broken but you can find your own way to enjoy it.[/QUOTE]

Another great review mate. By all means, keep it up

I have this game sitting at home I'm yet to start it!