League of Legends Review
Riot Games, 2009 - 2013​
People who play League of Legends are an angry bunch, by now you must of heard. Being one of the worst online communities in history is at this point both an understatement and undeniable fact, compelling even Riot Games to take action against its players' uncontainable ego. They've actually added features designed solely to discourage the incessant negativity, recently awarding virtual ribbons to 'friendly' gamers (heads up -- they aren't). Maybe the game isn't fun, you wonder, but then judging a game by its players doesn't seem in good taste. Instead, you could try it out yourself -- it's free, after all -- and see where the hatred comes from. Because it's the game, dammit, and soon you'll be a monster, too.

Oddly enough, a new account will greet you with comrades who are friendly, helpful, and more curious about the game and its colorful roster of champions than they are about properly dominating the fields of justice. The free to play model shines brightest in these early stages, arousing player interest in a number of ways. To start, you can now choose from over 100 unique champions, where every week a different set of 10 is made freely available. As you explore their different play styles you can then purchase favorites with actual money, or by using points (IP) earned by simply finishing matches. Choosing the free route, one can quite enjoyably cruise to the max level of 30 without ever spending money, earning enough IP to collect a number of personalities all while testing out the free picks each week. 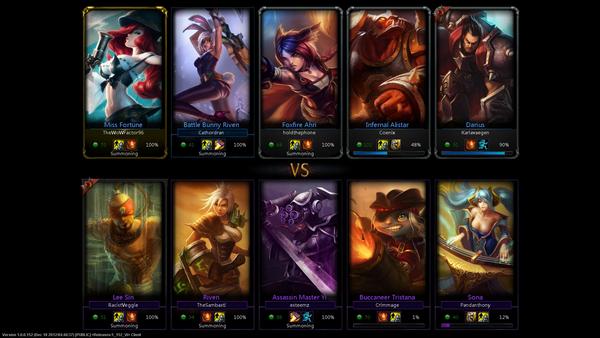 It's during this process of exploration where LoL is most innocent and perhaps -- before your heart turns to cold steel -- even the most enjoyable. Truly, could a game look any less intimidating? A battlefield reminiscent of 100 Acre Woods populated by collectible characters -- many of whom wouldn't be all that out of place alongside Winnie the Pooh himself -- LoL is undeniably adorable and yet somehow molded around fierce competition. Three lanes lead from one end of the map to the other, continuously spawning waves of minions to march down them.The objective is to help your own little dudes push down the turrets that line the road to the enemy's base, and finally destroy the Nexus within.

Where opposing waves meet is where the essence of League of Legends lies, because its the minions that yield not only the experience points that level your character, but also the gold that buys you powerful equipment back at base. Gold isn't shared, it merely goes to the killer, and so with only 3 lanes of minions and 10 champions playing the field, LoL demands that team members prioritize themselves into specific roles so as to farm the most possible gold from the minion waves. When all is said and done, what you generally get is 4 champions sorting the lanes into individual 1v1, 1v2, or 2v2 match ups against the other team. Meanwhile, the 5th player often plays behind the scenes, killing neutral monsters in the game's jungles while staying hidden by the fog of war. He levels at his own pace while looking for opportunities to help his team in the lanes, popping in for occasional ambushes.

Really just an RTS styled computer game with singular unit control, avoiding death in LoL is as simple as spacing yourself properly from perceived dangers. In turn, killing is as simple as catching other champions out of position. It's not technically difficult to understand or mechanically hard to perform, just a bunch of right clicking to move around, dodging spells, and staying out of harms way. But it's this kind of simplicity and common sense that make LoL both infuriating and addictive. Catching an opponent off guard is rewarding in how it makes them look like a complete fool, and you a total mastermind. There is no in between, no graceful way to accept a death, or humble approach to take a life. Someone screws up, and another takes advantage of his stupidity.

Consider how humiliating LoL can be. Maybe you're Gangplank, the pirate with a sword but also a flintlock pistol that can be fired every few seconds or so. The match begins and you head off to your assigned lane as the first waves of minions make their way towards each other, clash, and create a point of contest where you will meet the opposing champ. Maybe it's the little girl, Annie, who wears a pink dress and dangles a teddy bear at her side. Well aware of her deceiving looks, you dance around carefully, managing your mana, harassing the little girl with shots from your pistol, and whacking minions for gold. A couple minutes pass and your confidence is brimming. You've gotten Annie down to half health, scaring her away from the minion groups and thus starving her of any profit. But then she does something strange, and your brain knows it's strange but your ego won't accept the warning signals. She comes after you, within killing distance, and presents her life to you. And the moment you commit to taking it is when her friend from another lane leaps out of some bush, stuns you, and melts your hp.

These moments can destroy a man's soul. For one, dying means you have to sit in limbo for half a minute and watch helplessly as this little girl takes free reign over your lane, knocks down your turret, and farms as many minions as she pleases. It could also give the enemy team a crucial power play, allowing them to safely slay the map's dragon -- a mini objective -- for even more gold. And you can't hide your utter failure from your teammates, not when a very egregious game announcer laments: "An ally has been slain!" over everyone's headset. You can't hide the fact that a powerful Annie is now roaming across the map, terrorizing other lanes, and dismantling your team. Here is a game where what your teammates do is largely out of your control (you have your own lane to worry about) but whose mistakes you'll have to make up for later on when the team finally groups together.

But on the flip side (the victor's side), these moments breed glory and character love, which is LoL's continual selling point. Performing well with a champion renders it a symbol of pride, hence why so many people shell out cash for collectible skins to dress them with. And though each character ultimately wields similar tool sets of stuns, slows, and things like attack speed and lifesteal modifiers, Riot still manages get the hype rolling for new ones, even when they don't necessarily add any new dynamics to the field of play. There's a champion in here for everyone, all voiced with enthusiastic talent, all containing their own charms, easy to grasp controls, and colorful spell effects. Shape shift into a dragon, combo into brutal finishers, or meld into the shadows. Even when it's all the same -- that is, getting the jump on the enemy -- the fun is all in the details. 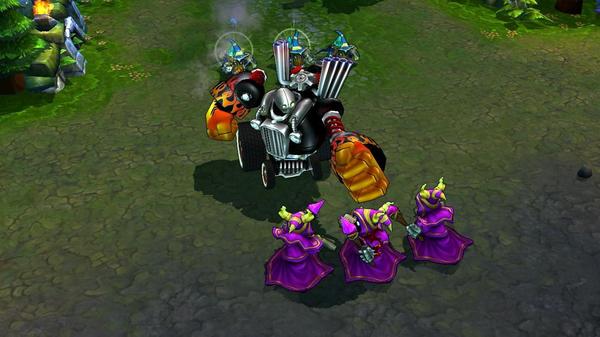 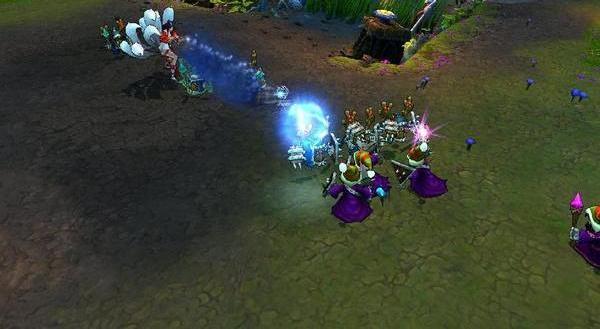 But the conformity of the champion designs also merit a good deal of criticism, since there are so few that can make the game's occasionally long match times (45+ mins) interesting. Iconic champions like Ashe, the frost archer, can fire a giant ice arrow clear across the map, while the killer robot, Blitzcrank, can shoot his arm outwards and yank an unsuspecting enemy into the clutches of his team. Such champions force exciting plays to happen, whereas many others fall into the defensive meta game that LoL is ultimately settling for. The community blames each other for this, as they blame each other for everything, but in reality, long and passive games are a result of fundamental design more than anything. It's a game about capitalizing on mistakes, and as you play with smarter players, less mistakes are made, and a great deal of mulling about, gold farming, and hesitant acts of aggression can create mundane time sinks from time to time.

But plays happen, and they always will. Even at the professional level someone is going to do something horrifically unintelligent and in turn get punished for it, and depending on what end of the abuse you find yourself on, it'll render you as either a raging gremlin or leering jester, succumbing you to nervous breakdowns or basking you in imaginary applause. And whether the match spirals to hell or not really doesn't matter, since it's so easy to be convinced that the next match will hold better luck. That maybe next time you'll be able to pop some enemy champions, bathe in their bounties, and pull a team of dysfunctional clowns through to victory. It's a team oriented but individually driven game, and you must remind yourself that everyone playing it is clueless, that you are their savior, and that if you aren't playing League of Legends angry, then you probably aren't playing it correctly.

I've never played, but heard this and that. Gotta say, from the beginning I thought you were just going to rag on it, lol. Given that I used to have rage issues when playing games, I should probably steer clear :lol:

You touched upon it briefly, but how fast does one really generate IP to purchase different champions or skins, etc. Different style games that I've played, generally the in-game currency took playing a lot of matches to afford the items, versus purchasing with real money.