Side effects may include motion sickness, out of body experiences, and the inability to distinguish your surroundings from gymnastic escape routes. People have reported dumpsters appearing as platforms, the urge to vault over their cars, and the way rooftops suddenly resemble stepping stones. Although no one will probably be seen jumping between office buildings at work, it’s best to stay inside for a day or so after completing DICE’s innovative take on the first person perspective.

In Mirror’s Edge, that perspective’s name is Faith, suitable for a woman who vaults skyscrapers. Her eyes are the camera, pan it down and she’s all there; a tank top that meets a pair of light khakis, tapering above her sporty red footwear so as not to obstruct movement. Her head tilts, her chest breathes, and the wind whistles past her ears. You are in this character’s shoes, and few games could claim that to such a literal degree. That bit about motion sickness wasn’t a joke. 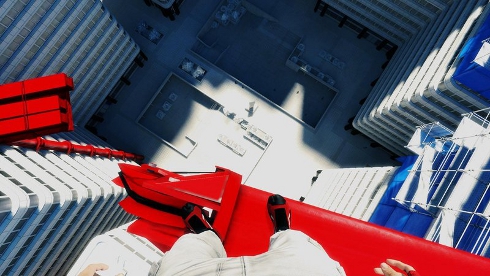 As part of an athletic insurgency called Runners, Faith uses her mastery of parkour and free running – effortless navigation of environment – to deliver information across the rooftops of a dystopian city. It’s a concrete safety net left untouched by the law, a circulatory system attempting to lend oxygen to a society that according to Faith, no longer breathes.

The isolated canopy of concrete provides an opportunity to get comfortable with Faith’s body and its capabilities, a runner’s toolset of vaults, vertical and horizontal wall runs, slides and landings. It’s disorientating at first, watching the world spin with every tucked roll, seeing a pair of arms reach out to grab ledges, or even the subtle head bobbing when rounding corners. And there’s not much time to straighten out those bearings, as Faith is almost immediately thrown into a conspiracy plot involving some very confrontational police.

Suddenly she’ll be sliding down the escalators of bright, bluely painted subways, breaking into office suites where it feels like you’re dashing through an Ikea magazine, and jumping across the backdrop of a city that’s almost entirely white, shimmering beside a beautiful lakefront. It’s all very pretty but in an eerie way, like the city is too perfect, a well thought out presentation of the game’s premise. Unfortunately, it felt a jumbled narrative was necessary to help guide that theme as well.

At most, that’s all it’s there for, to give Faith a good excuse to run. It’s an immature script scribbled upon a very maturely crafted game, one with an incredible atmosphere pumped by a cardiovascular soundtrack of electronic beats. To have its chapters strung together by funny looking cartoons -- and characters equally two dimensional -- is insulting to the talent seen in the game’s other areas. When lines get as melodramatic as Faith reminding her peers that the media “isn’t news, it’s advertising,” it’s almost more nauseating than any of the head whipping stunts she pulls off during the game.

Try to ignore it, because learning a game with a very real learning curve while bullet tracers dance around your every step isn’t easy, and will require unhindered focus. Mirror’s Edge grants you wings but kicks you out the nest much too early in this regard, expecting you to master its tricks under a hail of small arms fire from pursuing law enforcement. And you’ll fall, it’s inevitable. Misjudging distances, jumping too early or too late, making awkward and on the fly decisions – there’s not much time to think when turning around means game over. 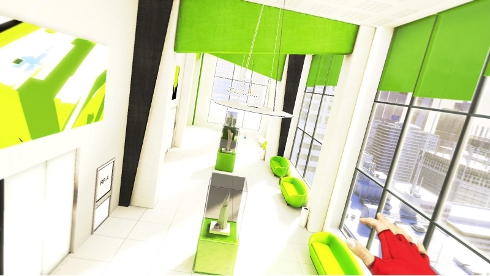 But the harsh truth behind the game is it rewards players who become good at it, and that's sort of why Mirror’s Edge works, eventually. The idea that missing a jump means fifty stories of windows blurring by as you approach the asphalt below is a terrifying reassurance of the game’s realism. Every jump landed after that ordeal is that much more rewarding. Losing the scent of a helicopter through a series of construction scaffoldings isn’t just an obstacle course of another game; it’s a matter of life and death.

That mentality certainly takes some imagination, but the game is designed to foster it. “Runner Vision” is its way of conditioning you to think like Faith would, analyzing her urban surroundings for opportunities to escape. It colors these opportunities red, painting the path of a successful getaway. Maybe that’s a pipe that can be climbed, a ramp pointing towards a big jump, or a box to trampoline momentum from. The red coloring of these objects will guide you, but only just enough. Its real purpose is to rewire your brain so it can scan environments at a moment to moment pace, looking for scalable distances at every glance, red or not.

And it works, though sometimes the cops still get a step ahead of Faith, breaking the game up into a series of fight or flight situations. The fantasy trying to be achieved here is obvious and ambitious, but rarely achieved. At its best moments, the game’s combat means two officers wheeling around the approaching corridor and presenting a great opportunity to transfer the kinetic energy of a sprint into a massive drop kick. Sending the first officer reeling, take the opportunity to grab his dropped weapon and sequentially take out his partner. Toss the gun aside when you’re finished or out of ammunition, and keep on running -- no sense having it weigh Faith down.

That’s every bit as awesome as it sounds, but usually the circumstances aren’t as accessible. Often times it’s a warehouse full of heavily armed SWAT officers that are waiting for you, creating a complete circus of trial and error. The cool looking disarm maneuvers demand an awkward melee confrontation, waiting for the enemy to take a swing at you, and grabbing their gun when it flashes red. That’s a nice one on one approach, but there’s no clean way to run at a group of heavily armed men without feeling completely ridiculous, and trying anything fancy is a great way to get killed. Play your cards right and that feeling of being a super human is there, but many of the game’s set ups simply forbid that from happening.

As an escape artist it’s best to run from these complications when possible, leaving them behind to enjoy a much more well executed platforming experience. The adrenaline of it all doesn’t always necessarily come from being chased, either; it’s more from just how authentic Faith’s body feels at any given moment. Something as simple as jumping a chain linked fence, for example, is one of the game’s greatest pleasures. It rattles as Faith scales it, and you can see her legs whipping over the threshold as she vaults over it – a 6 foot obstacle defeated in an instant as she quickly accelerates to the next. Her body is an animated powerhouse of immersion, it’s never not enjoyable to use. 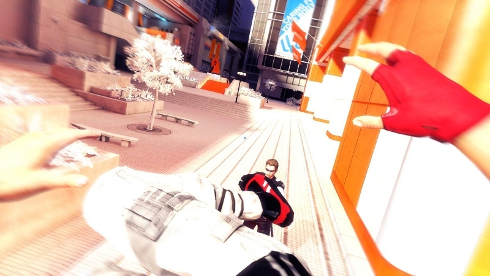 That remains true in even the slower segments, which probably make up the bigger portion of the game. Outsmarting the law means going into sewer systems, elevator shafts, and other places where people aren’t meant to be, but serve as exciting jungle gyms for Faith’s athleticism. In a way that makes Mirror’s Edge more puzzle like than advertised, but even its chase sequences are constructed in ways that allow for multiple solutions.

Whether it’s methodically climbing higher and higher into the rafters of a shopping mall, or sprinting through the fragile interior of office buildings – both can be tackled from different angles, and both have their own way of keeping the feeling of tension firm. Conquering complex environments with Faith’s unreal upper body endurance, or flying past the sound of bullets shattering glass, it’s difficult to say what’s most exhilarating.

And it’s only when that tension abruptly snaps that Mirror’s Edge trips over itself. Missing a ledge by a few inches, running into a frustrating amount of guards, or having an oddly placed elevator kill the climax of a heated pursuit – all are occasional speed bumps in its design. However, it’s the familiarity between the player and Faith that allows it to lift itself above these frustrations, and the best moments are too sweet not to revisit when that familiarity is gained. Whether that’s selecting a favorite chapter and trying to beat your best speeds, or mastering the nuances of the game’s trial courses.

But that first playthrough will always be the most memorable. After all, the game isn’t about memorizing the correct paths; it’s about not knowing where those paths lead. It's about those times when you’re sprinting towards a door, using all of that adrenaline to ram it open, and rushing into the blinding light of the rooftops -- not knowing where to go next. Look in all directions and cherish that sense of panic. You’ll have to make a decision and put some faith behind it, but just make sure that whatever you do decide on, you don’t dare try it at home.

Are you member "holdthephone" and "Panzerfaust"?

On other boards? Yeah, that's my handle. I don't think I've created a past account here, though. Did I? lol

Nope. I was just confirming that those names are you. We need to be sure that the community reviews are not copied from other members, and that you are the original author.

I will add this to the index if it has not yet been added.
U

Understandable. If you ever need further proof just let me know.
D 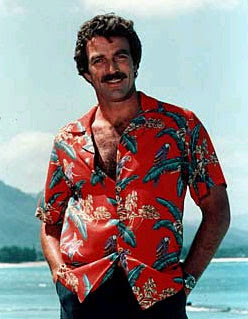 Lethal_PI all up in this bitch!

Nice stuff upmagic! I always liked the visual style of Mirror's Edge, a good way of showing if something can be used or not. And lol at the PI stuff.
T