The following review does contain spoilers. From the bottom of my heart, I don't think they're enough to actually ruin anything, but merely describe the nature of the game and its "twist." I avoid any concrete descriptions of what you'll encounter deep into the game. Nonetheless, a warning to those who are sensitive.

The surreal ruins of a contemporary Dubai is reason to give Spec Ops: The Line at least a shot. An oasis of modernity and cosmopolitan civilization completely ravaged by a violent turn of sandstorms and war, it’s a captivating piece of fiction. Repelling down its glass skyscrapers in glinting sunlight, inching your way up the blue lit aquariums, grand auditoriums and velvet mansions, hugging up against priceless furniture and marble pillars to shield yourself from incoming shrapnel, it’s an engrossing city to be a part of. Just the absolute scale of it! And maybe it speaks ill of the numbing battles, but as you pop and drop behind cars and slabs of concrete, you may find your eyes wandering away from targets and instead towards the gargantuan billboards in the distance. Admittedly, an ad for mascara is often more alluring than the combat.

Storms continue to swirl around the center of this metropolis, rendering it a no-mans-land and thus an isolated fantasy environment for the developers to work their magic within, if being a little awkward on their initial sleight of hand. A 3 man recon team of Americans is tasked with investigating a radio transmission penetrating the storm wall, hoping to find evidence of a surviving company of allied troops. As outlandish as it sounds, it’s not the premise itself that tugs the curtains on the phony wizard, but the ensuing characterization of the squad leader, Captain Walker, that gives Spec Ops the appearance of a child fumbling the routine of an unpracticed card trick. 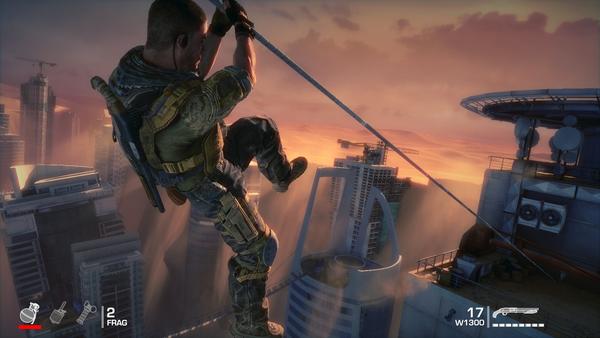 At first, the voice of Nolan North smoothly conveys Walker’s down to earth air of command, ripe with professional finesse and stoic judgement. Today’s mission is to just locate survivors and radio in the cavalry, he explains to his bored brothers in arms, and in just a short few minutes they find the SOS signal in question, a makeshift broadcast tower endlessly looping the same message. Walker’s got a smart itch that this might be a trap, and soon enough a small mob appears, hollering in a foreign tongue at the marines, pointing their AK-47s menacingly in your direction. Civilians? Insurgents? It’s uncertain, but they’re angry and this is quickly devolving into a matter of who loses their cool first. During the shouting match you’re given control of the situation -- an active crosshair. You open up.

Similar moments of interactive ambiguity arise throughout the game and mean to form its backbone, but of them, this first showdown is perhaps the most intense. It is, after all, the last intelligent decision Walker makes in Spec Ops: The Line, and effectively the only relatable dilemma among the many thrust upon the player. Because after dealing with the ambush, Walker does the unthinkable -- he presses forward. It is the tallest of orders, both insane and unnecessary, and only leads his squad into further suicidal confrontations, but indeed, he presses forward, never thinking to radio back. And by the time Walker realizes it may be a good idea to report the existence of a massive, hidden civilian resistance, they are too deep behind the unbreachable storm barrier to call for extraction. Accomplishing what it set out to do, the game now has you in its clutches, in Dubai, and from here it will continue to bend rules and characters where convenient.

And before you can question why, Yager Games is just so eager to spill the beans that they tell you everything there in the opening hour. Wave after wave of insurgents with a clear death wish attempt to halt your advance, and as you take your pot shots and leap over counters, working your way into a blasted out hotel lobby, you hear it. Jimi Hendrix, Deep Purple, a radio blaring tunes from the 60s and 70s, and a loony disc jockey’s voice welcoming you to the city as “tourists”. Spec Ops has gone bananas, and with no subtle use of allusionary reference does it admit that it’s the Apocalypse Now kind of bananas. Dubai’s desert to take the role of the metaphorical jungle, the dunes to be the river that sends a man into the darkest depths of his psyche. Hell, Walker is even chasing a lost American commander named “Konrad,” a tribute to the original author of this tale of madness. 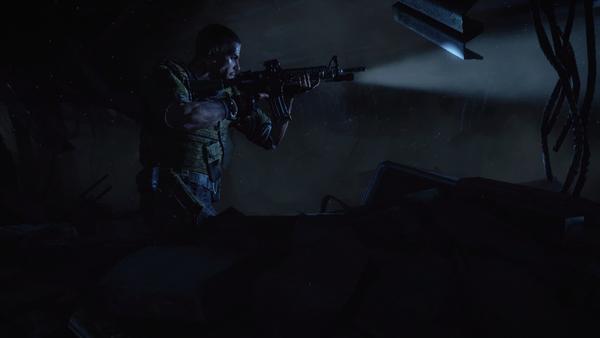 That you’re going to see some heinous shit there in Dubai is then guaranteed, but you’ll also be labeled as an active participant in it. This is an interactive experience built around your actions, examining not only Walker but the player as well. It sets you up as the enabler of unthinkable atrocities, meant to be an impactful introspection of your own motives for playing such a game. But the flaw of this psychology experiment is the already established disconnect between the credibility of Walker and the actual intelligence of the player. It pretentiously assumes that your role in this circus is voluntary, that you've been fooled, all while the game’s choice structure flip flops between meaningless decisions or ones that suddenly decide you don’t exist.

That previously described opening standoff acknowledges your presence, for example. You are the icebreaker to an inevitable firefight, the man who weighs the alternate opinions of his two comrades when situations get messy. All the game’s scenarios would seem to follow these rules, but randomly decide to throw them out the window. Instead, some pressure situations will outright end the game if you choose not to comply with the options given. The pivotal scene of the story is an atrocity you’re forced to commit, and while it’s clearly attempted to be disguised as an accident, it is obvious to anyone not half-asleep that no, you shouldn't be pulling the trigger here. But the game needs you to pull that trigger, it needs you to make that mistake. If you recognize you’re being played the puppet, the entire theme of the game loses all relevance.

In other words, you never have a choice in Spec Ops other than to follow the developers' linear destruction of Walker. And that wouldn't be a problem if the developers didn't go to such pathetic lengths to break the 4th wall, attempting to pin all of Walker’s crimes on you. “This is all your fault” says later loading screens between checkpoints. “That man has a wife and children!” cries the DJ as you rip into lifeless, strictly scripted enemies. Enemies that long overstay their welcome. Hours of marines shouting the same variation of battle confirmations. Endless turret sequences, exploding barrels, and a melee execution so janky in its animation that’s it’s not even enjoyable or worth your time to use on those poor, suddenly helpless civilians. This is perfect mediocrity, so much so that perhaps it was purposely made this way so you would be half-asleep when an important plot scenario came up. 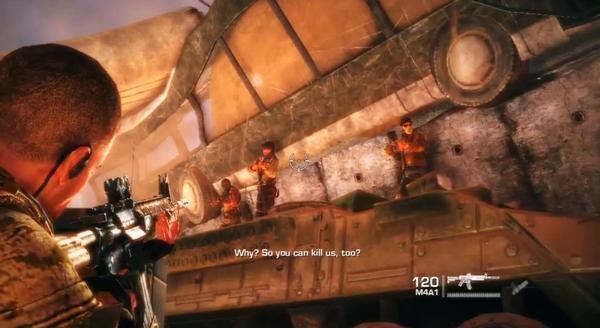 The under cooked violence is meant to soften you up for the game’s gut punching blows of shocking imagery -- to paint you as a demon. But where many other games have examined a player's role, matters of ethics, and will ask you to question your state of mind, Spec Ops brazenly shortcuts around this complex process. It instead builds an experience which earns none of the assumptions it makes about the individual. An unfair exploitation of the character to player relationship that later has the gall to ask you to man up for your mistakes, to admit your own numbness. You monster, you!

And so there’s only one way to truly win at Spec Ops: To accept that ‘Game Over’ screen as your victory. It’s the only excuse that could be made to justify game design this shoddy -- that its point is for you to dislike it. And although commendable in its ambitious and often haunting city, though admirable in addressing such contemporary issues, and though Spec Ops does manage to achieve the repulsiveness it seeks, it’s not in the way it intended. It’s not the gory depictions of your actions that make it revolting, no, it’s the insulting abuse and fundamental misunderstanding of the interactive medium. A medium capable of much more than just smoke and mirrors.

Damn. This was excellent. I like that you critiqued Spec Ops with an approach that other analyses out on the Interwebz ignored. I, too, felt forced to commit the atrocity that happens mid-game. I don't think I realized beforehand who exactly I was impacting, but I certainly didn't like the idea of doing that to even my enemies - but was forced to in order to move forward.

Hey, thanks for the plug!

Honestly I thought I'd be alone on this one. I understand why a lot of people found this game powerful, what with the imagery and all, but as a form of self-analysis I felt it was awfully primitive stuff.
D

I just skimmed this because I do want to play the game for myself and judge it without too many different opinions going through my head.