Tomb Raider review
Square Enix, Crystal Dynamics 2013​
It’s become rather conventional for today’s games to open with a roller coaster of CG animation, scripted sequences and quick time events. It’s just what big name titles have to do these days to engage the player, like the first episode of a debut TV series where you can practically see the producers in the background throwing money at huge props, computer graphics, and expensive explosions. But what glorified linear sequences in games and grandiose episodes of TV series have often taught us is that their respective creators don’t have the resources, the time, or the devotion to repeat the same, epic experience for the whole 10 hours, or for all 26 episodes. There comes a drop off where the developer will let go of your hand, give you some easter eggs to collect and enemies to shoot, and say “hey, we did all we could, now go run and play,” saving the rest of their efforts for a memorable finale. But Tomb Raider? Tomb Raider doesn’t understand the meaning of “drop off.” Or budgets.

A prequel and reboot to the crumbling franchise, it pits a new Lara Croft against dire circumstances. Her archaeology expedition and small reality show crew finds themselves shipwrecked on an island inhabited by murderers and mysterious cults. Knocked unconscious and separated from her friends, Lara awakens alone and strung up high in a corpse ridden cavern. From here the game follows the routine described above, and as expected, its opening escape segment is stunning for it. But it’s not even for all its staged brushes with death that make it so. No, the real appreciation all resides in the details. It’s when Lara cuts herself loose from the ceiling and hits the cavern floor, flat on her back and directly on a small wooden spike that punctures her abdomen. And it’s the way she writhes. Her nerves arching her back in response to unbelievable pain, a character and game springing to life before your very eyes. 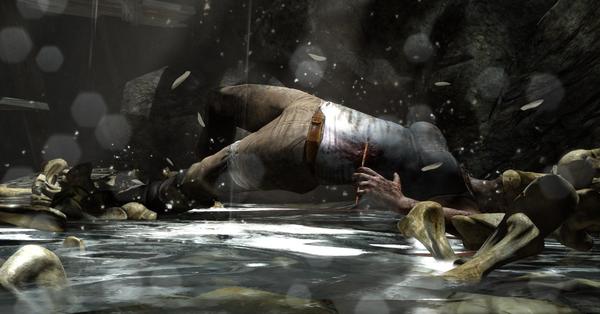 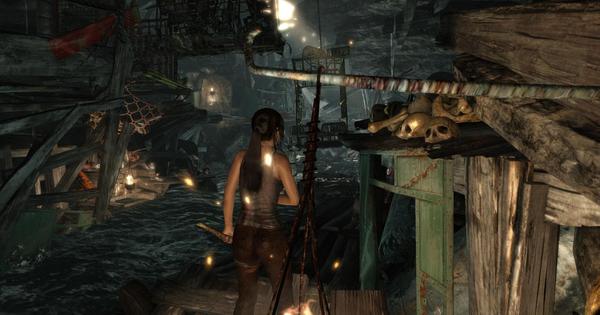 This sort of characterization is often overlooked in the medium, that is, the way characters develop in relation to their rendered models and not just the written dialogue that comes out of their mouths. Tomb Raider has a novel understanding of how to engage the player through animation, movement, and subtle detail. It’s a kind of realism that doesn’t insist upon itself, either. Lara is still a game character with invisible pockets of firearms and ammunition, she still regenerates health after taking a few hits to the face, and the game still revolves around experience gathering, breaking open crates, conveniently placed platforms, light physics puzzles and scavenging for hidden goodies. But it’s the way this girl moves through it all that makes Tomb Raider as exciting as it is, and the fact that the game is always forcing her to move, constantly giving the player new mechanisms to do so, and never letting the B rate movie script get in the way of what’s important.

With a huge draw distance and lush island backdrop, Tomb Raider gives itself ample opportunity to show off its lifelike control. Traversing across the usual balance beam bridge turns into a frightening obstacle of heights, and tired and overused gameplay aspects like zip lines feel like flying compared to other games. These highs of adrenaline are then cut between those of suspense: Creeping through the leafy shadows of a forest canopy, bowstring pulled, eyes searching for a wounded deer to finish off and salvage from, where not more than 15 minutes later Lara will have her foot in a bear trap during a howling rain storm, defending herself from rabid wolves that hint at the direction of their attack by rustling in the nearby foliage. There is no reason for a game to spoil the player with this many memorable segments and at that kind of pace, but it's relentless. There are multiple times where you’ll hit a climax and think that surely the developer has run out of ideas and/or money, but the game continues to one up itself at every turn. Sprinting across crumbling bridges, barreling down rapids, picking off platoons of cultists like a kind of green beret -- there is never a segment that feels like padding, or like the human touch has left the character. The level of detail is always there.

Stumble into a room full of goons, for example, and Lara will immediately recognize the situation with a panicked whisper of “oh shit, oh shit!” as she smartly ducks down as you approach cover, a dynamic camera nestling up close in response to the tension. There is no button to latch onto a wall or any of that nonsense, Lara just does it when it makes sense to do so. It’s hands free immersion. The developer’s presence simply never abandons the experience. There’s no sprint button because there’s no need for one, not when Lara is herself moving in relation to the environment, shielding herself from flames and extreme wind, placing her palms against walls to keep her balance, and covering her head from falling debris. She’s a marvelous character because she contains so many unique instances of animation, emotions, and responses. She makes walking through something as banal as a corridor somehow interesting. 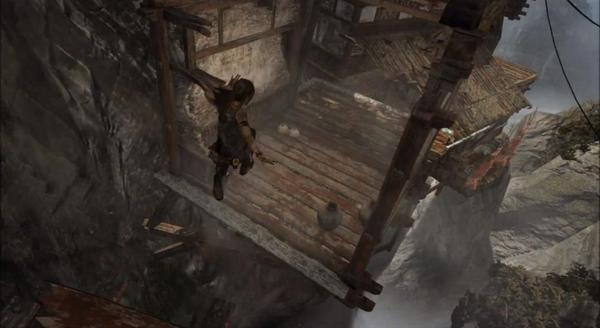 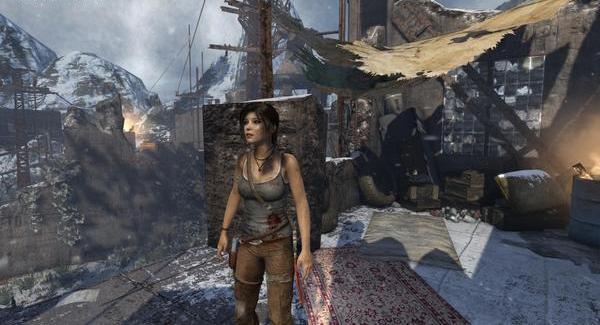 These motions she goes through range from those of vulnerability, to ones that eventually ground herself as an individual, and later a heroine. While the game certainly gets very hollywood with its set pieces and plot, she is never made out to be any less human by them, only more inspirational. Tomb Raider has an excellent handle on the illusion that Lara is always scraping by the skin of her teeth, serving up gruesome death scenes should you misstep. No matter how confident you are that you’ll make a jump to a nearby cliffside, it’s heart stopping to see the character fling her pickaxe into the rock, her legs briefly dangling as she holds on for dear life, pulling herself up gradually. When strangling an enemy from behind with her bow, even though you know you've got the guaranteed kill, it’s never easy watching her awkwardly wrestle the life out of the enemy.

Of course, the killing does get easier, and progressing through her skill set will reveal new sides of Lara. Her awkward bow strangle will turn into a gruesome stabbing as she wrenches her pickaxe from the collar bone of her victim. Take downs on wounded enemies will start with a resourceful stone smash to the face, but eventually evolve into unnecessarily violent executions like holding a shotgun under an enemy’s jaw. In response the cultists will reveal new sides to their character as well: Overheard conversations of uncertainty and fear, reminders that in your attempts to survive you've added quite a few murders of your own to the score board.

But as the combat goes one-woman-army mode, the theme of survival doesn't necessarily lose it’s merits. Playing on hard -- as you should with any game these days -- sets an appropriate level of intensity, keeping you honest moment to moment. Take cover and a second later there’ll be a stick of explosives at your feet. A perfect example of how movement can convey atmosphere is how you’ll evade but not with a cheesy combat roll, no -- Lara scrambles out of the way of enemy attacks, head over heels in a short dash for safety, ducking under swung machetes and clawing at the dirt before getting upright again and taking a well aimed shot her attacker. It’s amazing what a little pressure and proper animating can do to the all too familiar cover shooter.

Call it magic. And whatever trickery Crystal Dynamics is working at their studio, it’s a kind that’s defeated the common inevitability of great games having to settle for less. If anything, it would seem they sacrificed the quality of their multiplayer component in order to pull this off. But if such a ritual is necessary to make such a hysterically varied single player game, then let those shoehorned multiplayer components burn in the brightest of fires. Tomb Raider is an insane adventure of many facets, less of a genre interpretation than it is its own experience, an unwavering example quality even in the face of surprising 10-12 hour length. It’s like the Half Life 2 of third person perspective gaming, and this girl and her climbing pickaxe easily earns a spot next to Mr.Freeman and his crowbar.

I so want to be able to play this game but I cannot keeps crashing.
Y

Great review. I will prob buy on pc when it goes on sale. Spent the cash for the PS3 CE haha.
S

Man, everyone keeps saying good things about this game. Something I wasn't expecting a few months back. This has been indexed, good review!
K

Well after a few patches this game now works without crashing.

Loving the game and story in general and having lots of fun playing. Seems like avery well made and thought out reboot to an lready great franchis Of course its not perfect so here are Things that bother me about the game but do not dispell any fun or lower any potential scores.

Sound - The voices and SFX are on the same channel so SFX often completely over powers whats being said and nothing can be done about it and when using head phones Lara's footsteps sond like they are coming from behind.

Quick time events
These suck anyway and are porbably worse with a keyboard, mashing strafes (W+D) then having to press F then press E is a nuisance. I cannot do W+D fast enough on with 2 fingers on one hand so use my index fingers on both hands and thats where the problem starts.

Mouse sensitivity is off slightly, I can deal with it, its not anywhere near as bad as Bioshock on PC. The problem occurs when zooming it feels like some sort of interpolation going on, zooming feels horribly notchy like pixels are being skipped.

Looks pretty nice too, this pics are NOT max settings No anti aliasing (AA) for starters.

I am going to get the game but am thinking should I get it on PC or PS3. On PC it would be on the low (near lowest) settings. So what do you guys recommend?
K

[QUOTE="FaXXaL, post: 6124364]I am going to get the game but am thinking should I get it on PC or PS3. On PC it would be on the low (near lowest) settings. So what do you guys recommend?[/QUOTE]

Depends what specs your PC is.

I played this on Ultra on PC, but the fan in my Alienware X51 annoys the hell out of me so I ended up picking it up and finishing it on the PS3 instead.

I was quite surprised how nice this game looks on the PS3, it's probably a touch above the lowest PC settings.
F

Please don't laugh at my PC specs. Its a 2.2ghz Core 2 Duo with a Nvidia gt630 1gb and has 2gb ram. It isn't a gaming PC and the only game I have played on it is RE Revelations. As I was getting the PC version of Tomb Raider quite cheap so thought about it. Think I should stick with the PS3 version?
K

Yes I think PS3 version would be best for you.
F