Fal'Cies serve as the supernatural workers of Final Fantasy XIII's world, demigods that shelter humanity in a sphere-shaped structure called Cocoon. There they nurture the citizens' every need, cradling them in the sky above the feared and wild earth below known as Pulse. But as Final Fantasy XIII begins, that floating paradise is being dismantled. A foreign Fal'Cie from Pulse has found its way inside, erupting a panic between a fleeing civilian resistance and military groups attempting to "purge" the sector clean of the contamination. Amidst the chaos you'll lead an unsuspecting cast to the heart of the conflict, where the alien visitor deals them a dreadful fate.

Your party is made Li'Cie, magically infused humans branded by the Fal'Cie, thus becoming errants in service to an enemy of their own home in the clouds. It marks upon them an ill willed destiny, or Focus, giving only a small window of time to complete it as they face 3 possible outcomes. Fail and become monsters, succeed and turn into crystal for eternity, or simply die. Talk about being dealt a bad hand. And when their Focus is too vague and muddled to interpret, the crew can only fall steeply into despair as they flee pursuing military platoons, hunted as enemies of the state. 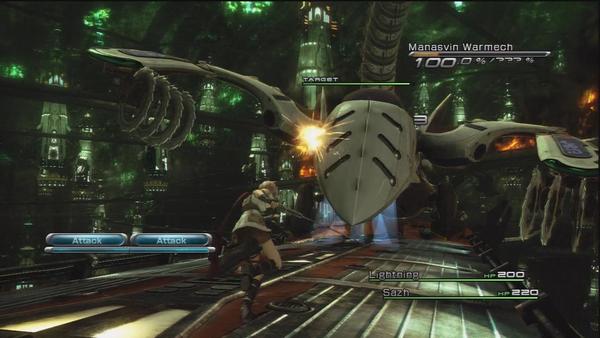 That's a slew of fantasy terminology to get comfortable with, though the exiles are equally lost and confused by it. Truth be told, no one has any idea what's going on for quite some time, but like an illusory trick, Final Fantasy XIII is already set on a predetermined road. While the game's opening train hijacking ends in abrupt, CGI destruction, its design remains very much on rails through its entirety, rarely deviating from straightforwards paths, controlled leveling, and the developer's always guiding hand. It's an on foot succession of enemies, cutscenes, and occasional nooks that lead to treasure chests, a forty-five or so hour road lined with save points, where loading back into the game means just one thing -- onwards.

And onward the party goes, testing their newly acquired powers on the soldiers, machines, and oddly formed creatures of the wild that number the path before them. Engaging enemy patrols will transition you to a battle screen where a time gauge begins to fill, allowing the party leader to choose a string of actions to perform in sequence (e.g. "Fire -> Fire -> Blizzard -> Sparkstrike"). Each hit will inch up the chain gauge of an enemy until it Staggers, at which point it will take significantly increased damage for a short period of time. Failure to attack the same unit frequently enough, and the gauge will depreciate -- so back to work you go.

It's a fluid and fast paced take on turn based combat, and so the game features an Auto option to string up combos for you. Perhaps Square should've named it something less insulting, because the button is invaluable, and winning is anything but automatic. Instead the feature helps you focus on the gauges and enemy behavior, visual cues that demand fast reaction and adaptation to dynamic encounters. Take a moment such as when an enemy rocket trooper begins to shoulder mount his RPG, for example. To prepare for the incoming missile you'll want to switch the roles of your party immediately, using what's called a Paradigm Shift, transforming your 3-man party of Commandos and Ravagers to perhaps Medics and Sentinels, thus mitigating the incoming damage. Once the danger has passed, it's a mere twitch of the finger and your party will resume the onslaught.

The system is slow to evolve, not reaching its spectacular peak until after the first third of the game. Before that is a mixture of character role discovery and archaic drudgery, where the cast ventures off in pairs to handle their hopeless ordeals individually. Low damage output brings about slower battles, making guarded treasures or overly simple segments of fighting a tad tedious. It's a bold game in that it's so heavily reliant on strict structure, but with it brings a fragility that can really test your patience, pathways occasionally lined with one too many minibosses. Though, at the same time, most enemy combinations are usually crafty and conducive to learning, and a high density of cutscenes help push a very character driven game past poor level planning early on. 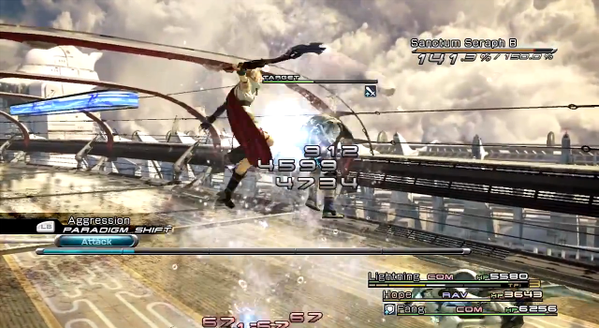 At face value, the cast almost perfectly reflects the tired tropes of the genre. Lightning, the game's pink haired cover girl, is a rogue officer with an apparent death wish, opting to take the fight to the capital simply out of spite. Snow, a bone-headed resistance member, has an overblown hero complex, and then there's Vanille, a bubbly, Australian accented girl who will certainly annoy you, as may Hope, an opposingly sullen adolescent. But as quickly as you can judge them initially, Final Fantasy XIII turns these characters upside down, and beats the stupid out of them, often literally.

Snow is ridiculed and exposed as the naive manchild he is, and refreshingly, it's Hope, the actual kid in the party who does it. He fastly matures past the adults as a result of losing his mother in the game's opening warzone, finding a new maternal figure in Lightning, admiring her cool head and battle skills. In turn, her badass demeanor is deconstructed as a cover for neglecting her own family, and she uses Hope to fulfill her desire to be a protective sister, the two shouting words of encouragement at each other as they dish combos. And first taken as the comic relief, the military pilot, Sazh, is starkly less optimistic than the chickadee that lives atop his afro would have you believe. An already broken father before being branded, there are times in the game where he is legitimately shown contemplating suicide. Even Vanille, the cheeriest of them all, contains the narrative's darkest secrets.

No personality is all that deep, nor is the dialogue any less hammy than of the franchise's past, but this structure utilizes some of the greatest aspects of Japanese melodrama, and explores the style from new angles. For instance, a true villain is never quite pinned down until the very final moments. Instead, conflict resides within the characters themselves, literally personified through summoned beings called Eidolons. It is unsure what their true purpose is, meant to be interpreted by the player as the game goes along, but the Eidolons only appear when a character seems to have lost all hope, or deviated from their fate. Each emerges to stand before the broken Li'Cie, prepared to serve them the death they perhaps crave, acting as pivotal boss encounters that bring each personality to climatic analysis.

That adventure is a dark one, but at the same time jarringly beautiful, colorful, and uplifting. Nomura's designs have never been more modern and minimalist, helping each character pop off the screen with subtle effects, such as Lightning's flapping shoulder cloak, or the way her sheathed sword bounces off her nimble legs as she jogs along utopian wonderlands; a glistening white wood, a carnival city of dreams, air fortresses and a capital that sits in the sky. And as each character faces their inner demon, this sheltered and artificial world teeters closer on the edge of armageddon. Crashing pianos and apocalyptic Latin choirs join challenging, race-to-the-finish boss fights that question your party's resolve to survive, and as the group comes full circle, their abilities mesh in dazzling animations and super powered flurries of spells and martial arts. 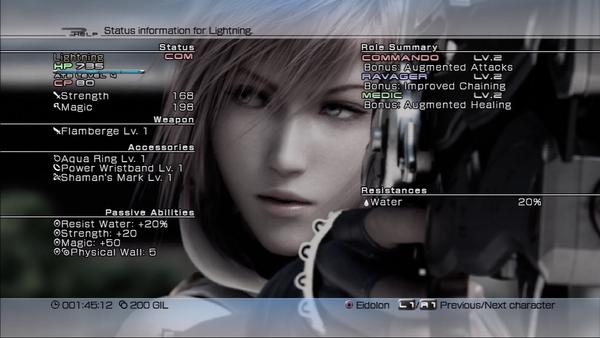 Whether that means launching behemoths into the air and juggling them with 3 Commandos, or approaching fights with a steadied mix of defense, sustainability, and tempered damage, Final Fantasy XIII stands as a new kind of JRPG that rewards varieties of intelligent play and players who think on their feet. Experience points are spent in a grid that is locked between tiers, capping those who wish to sit and farm respawning patrols, a clear message against grind heavy games of the past. Instead the design pushes you towards shrewd rationing of scarce components to upgrade equipment with, experimenting between each character's different Paradigm roles in order to overcome merciless opponents, and choosing between weapons of different styles rather than those that merely hit harder. A limiting game that leaves room for options that count.

That controlled linearity is an interesting juxtaposition to an experience that, truly, never has clear direction. The winding corridors and paths seem to be the very incarnation of the fate the characters are tied to, forbidding but ambiguous, showcasing a game that was designed from the ground up to support its narrative. The approach pays off with one of the most emotionally charged endings the genre has seen in quite some time, though it comes at a cost, continuing to abuse a franchise name by leaving the traditions that molded it. But perhaps breaking tradition is Square's way of holding on to the only one that ever mattered, that is, an unprecedented commitment to the imagination of a new generation.

The biggest problem I had with XIII is the amount of jargon they throw at you immediately without really explaining it, which you touch up on. Unless you read the back story stuff, you could easily miss out on a lot of the details.

Coupled with the endless tunnel and repetition of it all, I just didn't find myself enjoying it. Good read though. You're like a machine at the rate you're releasing these reviews.
U

[QUOTE="Sir_Scud, post: 5981463]The biggest problem I had with XIII is the amount of jargon they throw at you immediately without really explaining it, which you touch up on. Unless you read the back story stuff, you could easily miss out on a lot of the details.

Coupled with the endless tunnel and repetition of it all, I just didn't find myself enjoying it. Good read though. You're like a machine at the rate you're releasing these reviews.[/QUOTE]

I wrote this last week, and my other pieces are older as well. I don't actually write this fast, lol.
D

You're doing a great job mate and its my pleasure to add this review to the index now. You've been here less than a week and already have more reviews up than me
I'd better start finishing some games so I can get writing ><
Last edited: Jan 8, 2013
R

Nice review upmagic, Lately I've been thinking of dusting off my FFXIII and popping it into the PS3. I think I might jut do that sometime today after reading your write-up.

lookin forward to more of your reviews.
G