Platform(s): Playstation 3
Publisher: SCEA
Developer: Santa Monica
ESRB: M
​
God of war: Ascension takes you back in time when, Kratos became the, Ghost of Sparta. Breaking the blood oath to a god is the greatest offense you can commit as the three sister furies, who serve the gods by punishing the unjust, relentlessly hunt the spartan to pay for his crimes but also force him into continuing his pact with, Ares, the god of war.

Kratos on his knees after breaking his oath with, Ares
​
A spartan general reduced to imprisonment by the furies, he is chained and tortured but it doesn't take long for Kratos to unleash his rage and break free from his prison as he strikes the warren and chases after her in a series of ambushes in an attempt to stop you. If you've played past, God of War games then you already know the mechanics on how to play it. Otherwise, a series of hints will appear before you at the right times, making the know-how easy to understand.

As I continued chasing down the fury, the prison which our protagonist was held captive in, is actually a titan carcass, the first traitor the furies punished after it broke it's oath to, Zeus. However parasites that invade it's pores quickly bring the monster to life, completely changing the environment as you fight your way through a dynamic battle scenario complimented by quick time events that require certain button presses. Something new that I noticed was the sliding event in which you have to maneuver him from debris from a collapsing path. 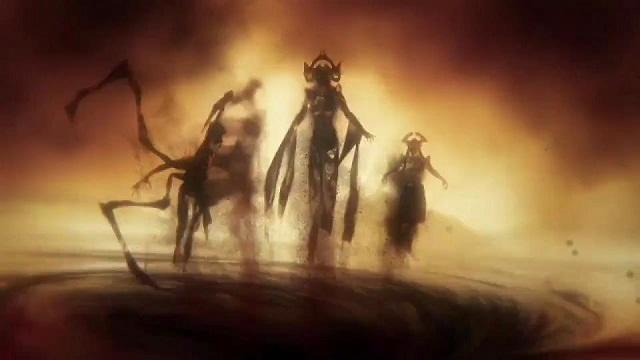 The three sisters
​
Most of the chase involves trying to survive against a giant that tries to crush you while fending off against guards and parasitic prisoners. What is awe struck is the fact that you are fighting everything at once. Once the battle is over you are taken back two weeks before your imprisonment to shed light on all this. A shady person offers you help but his intentions are an enigma.

The art style of another, God of War game never ceases to impress. All the physics and mechanics revolve perfectly around the game, you'll be amazed at the level of detail and changes that mold it. There are three useful artifacts that, Kratos will get; One will help re-create paths or decay them if they are in your way and the other will form a doppleganger that can be used to hold levers or stand on objects to clear puzzles. While I'm on the subject, puzzles are made well enough to make you stop and think on how to clear them.

There is more emphasis on climbing than past God of War games so you'll find yourself doing this more often but not enough to make it a chore, it does a great job at balancing things out. As for combat, your main will always be the blades of chaos - later on they are complimented by four elemental attributes which you can switch anytime during gameplay with the D-pad; upgrade system is the same as usual which requires red orbs to strengthen them.

Continuing on the battle system, you'll find it repetitive if you main your Blades of Chaos so they spiced things up a little by allowing, Kratos to use a secondary which can be from physical attacks to swords and shields that you can find throughout the game. You want that nice sword the enemy is carrying?: Kick him enough to drop it so that you can use it at will. Each secondary weapon has a devastating special by holding the L1 button and O but using it will destroy it so replenish it by kicking them.

A spear is one of many weapons that you can use in battle
​
While that won't completely solve the repetitive nature of the game, you'll be too absorbed by the difficult battles that come your way to notice. Coming back to the elemental attributes you obtain, each one has a death blow effect. One will give you more red orbs while another will grant green orbs if your foes are incinerated. Not only that but they also have a special that drains one magic bar to perform a wide range attack. These are good to use if you are surrounded or save it as a last resort.

Larger enemies involve stabbing them repeatedly before landing the finishing blow
​
Finally the difficulty spikes towards the end so prepare yourself for wave after wave of strong enemies. I found it ridiculous in some areas where tough to kill monsters were popping out left and right but clearing the area made it fulfilling. Boss fights are, like in God of War 3, impressive in scale and accelerating, compliment that with incredible graphics, a majestic score and you have a blockbuster action game.

After beating the game you are given the chance to play it in, New Game+ Trophies are disabled in this mode but you'll re-play the game with full health; have all the weapons you've upgraded and be able to use special items that you find throughout the game that will give you max rage, health boost, orb boost, etc..

Verdict
The game did almost everything right. The developers did their best to change the battle a bit but you'll still find yourself button smashing the usual, Square and circle. Another issues here is that they missed their target of making, Kratos more human by failing to properly develop his character. He does show kindness towards some and love for his family but it was not enough and instead it was all drowned with violence.

Ascension tried to make, Kratos more human
​
Mind you, it's still a great experience. Dynamic environments will bring the game to life with challenges that will test your wits. It's a beautiful game to look at and you'll be pleased by how well it was put together. You might notice some glitches but a quick restart checkpoint will fix it. If you love God of War, give Ascension a try.

-Story does little to bring substance to the series
-Battle mechanics can be repetitive
​
Last edited: Apr 17, 2013

Nice stuff Fon! Everything is indexed, welcome to being a sea horse I really like your writing style, you should give an opinion piece a whirl. I know it would be pretty interesting to read.

Still haven't played Acension, but I know I will at some point!
F

[QUOTE="Sir_Scud, post: 6068223]Nice stuff Fon! Everything is indexed, welcome to being a sea horse I really like your writing style, you should give an opinion piece a whirl. I know it would be pretty interesting to read.

Still haven't played Acension, but I know I will at some point![/QUOTE]I was actually going to write an opinion piece in regards to the story of this game. I didn't add it into the review because it sounds more like a rant. Thank you for the promotion. I'm shooting for the legendary, Dolphin title!
S

I look forward to reading that opinion piece, then! I'd say, based off the little I know, it would probably spark some good discussion. Lethal has been far ahead of everyone for too long. Gotta start typing up some stuff
You must log in or register to reply here.
Share: Facebook Twitter Google+ Reddit Pinterest Tumblr WhatsApp Email Link
Reply