When Rockstar first “announced” Grand Theft Auto V by publishing the letter “V”, it unchained an entire media storm. When the trailer was released a week later, the world went crazy. This just shows how immensely popular the Grand Theft Auto series are. Everyone and their uncle knows about GTA. It’s impossible to ignore the success of Grand Theft Auto, and the sales confirm that. 30 million copies in the first week? That’s insane. Is Grand Theft Auto really that good? Let’s find out.

I would like to start off with the game world. Because this game is HUGE. The size of the map is a mind blowing 127 square kilometers (thank you Google). In comparison, Skyrim’s map is about 40 square kilometers. Indeed, Grand Theft Auto V is enormous. Luckily you have cars, planes and other vehicles at your disposal. If you want to buy a helicopter, a plane, some cars and a motorcycle, or if you want to steal them, that’s completely up to you. Although I might add that if you own a helipad, you can steal a helicopter and land it there. It’ll be yours FOREVER. Might save you about a million bucks. One more thing: when you buy Grand Theft Auto V, it comes with a paper map you can put next to your map of Skyrim. And if you don’t have Skyrim: have a look at my review, be ashamed, and run to your local game store.

What’s typical about the game world in GTA V too, is the huge amount of freedom. There are so many things to do! You can do some yoga, play Tennis, cruise around town in your fancy car, shoot hookers, do “Stranger / Freak” missions and much, much more. The games like tennis and yoga aren’t that much fun in my opinion, but the side-missions and the “riding around town shooting hookers and cops while blowing up gas stations” is amazing. It just never gets old to jump on a car with a RPG and blow the car up, with yourself on it. It’s amazing. Now that I’m talking about shooting and jumping anyway, let’s talk about the actual gameplay. 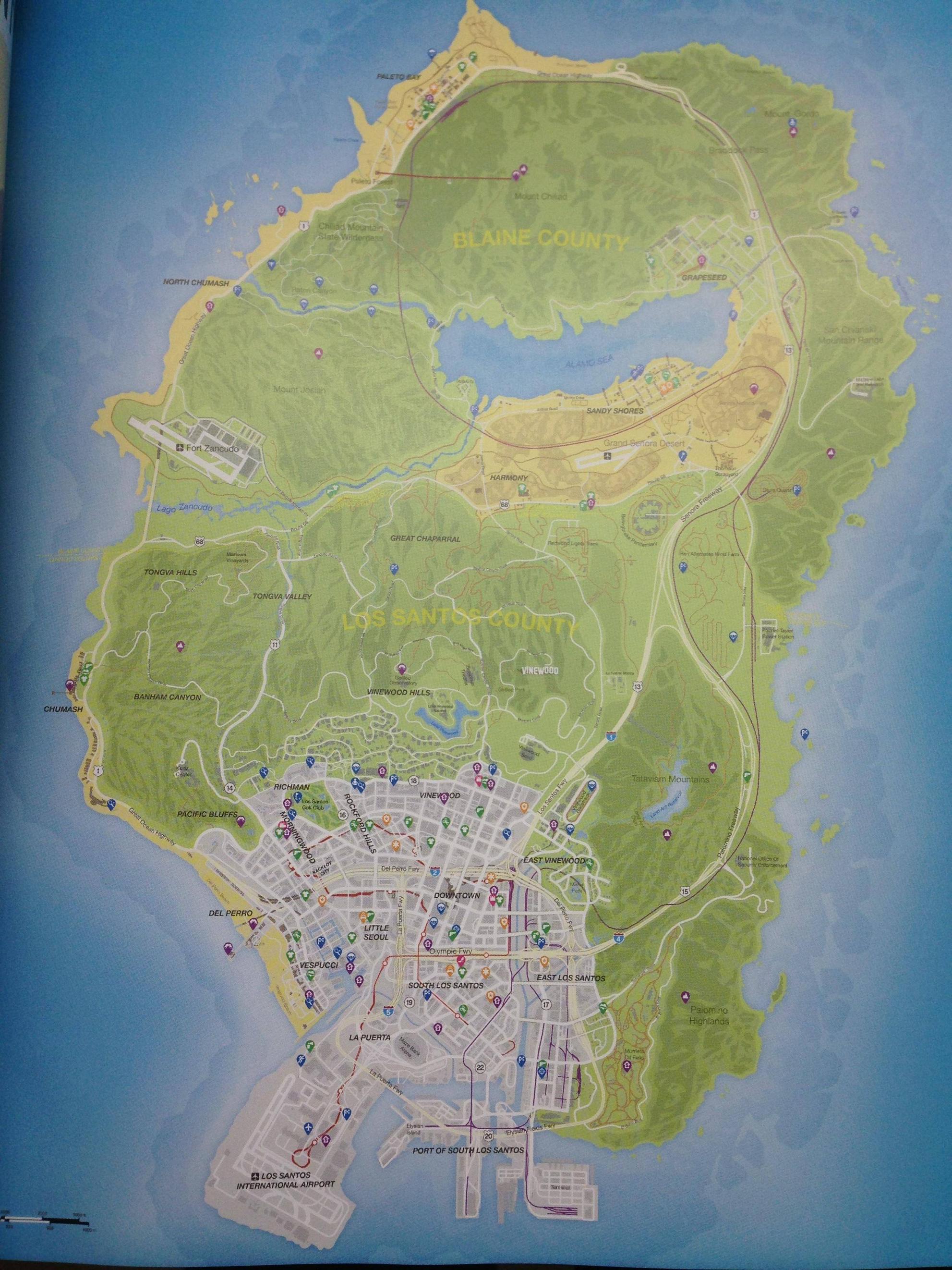 The gameplay in Grand Theft Auto V is typical for GTA. The game is in third-person view, the shooting is quite fluid, if a bit simple from time to time (because of auto-aim). With L1, you can switch weapons (you get a weapon wheel, and you can select them using the left thumb stick). L2 is aiming and R2 is shooting. New are the special abilities the characters have. When you press L3 and R3 at the same time, it activates them. Michael can slow time so he can shoot more easily, Franklin can slow time in traffic so he can navigate easier. The most original one is the one from Trevor. When you activate his ability, he’ll go into some kind of rage-mode, so he’ll deal more damage while he takes less damage. While he’s in this mode, he’ll shoot the “bad guys” like it’s nothing, cursing while he’s at it too. I found myself saying “hell yes!” every single time I used his ability, just because it gives you the feeling that you’re unstoppable. Until you get that fatal bullet in your chest of course. Trevor’s ability doesn’t make you invincible.

I really don’t want to spoil the story, so you guys will have to do with a very short summary, and play the game yourselves, if you haven’t already. Anyway, the story is about three men: Michael, Franklin and Trevor. Michael is a retired bank robber, who lives the American dream because of a deal he has made with the “FIB”. He has to get back in the game after he’s made a little “mistake”. Franklin is a “street gangster”. He’s collecting repo for a car dealer. After meeting Michael, he loses his job (I’m not telling why, find out yourself. It’s within the first 2 hours of the game if you play it slow) and then joins Michael’s crew. Trevor is a whole other story. This crazy bastard lives in Sandy Shores (the desert) and is the owner and founder of TP (Trevor Philips) Industries (he sells crystal meth and other illegal products). Trevor used to work with Michael, until something happened (you’ll see in the very first mission). After ten years Trevor finds Michael again and they have to start working together. Now, let’s talk about the heists in the awesome game.

In GTA V, there are 7 heists to be completed. The first one is the prologue, but the other 6 are full on heists. The way you’re going to pull off these heists is fully up to you. You have to plan them, collect the needed things (vehicles, weapons, suits) and you have to pick your crew. That last one, is really, really important. The crew is going to affect the heist just as much as the method you chose. If you make savings on the hacker in the first heist for example, you’ll have less time to grab as much jewelry as possible (there, we do have one small spoiler, I’m sorry). I expected the planning and the gathering of the needed materials would be repetitive and boring, but boy was I wrong. It’s actually a lot of fun! Every heist requires different materials, different crewmembers and different tactics. That makes every heist unique and fun.

Of course, the most fun part is the heist itself. And damn, the heists are fun. Pulling of a heist really gives a kick, especially when it’s over, and you see how much money you’ve made. Because money plays a big role in this game. You can invest money this time. The best thing: Franklin gets missions from someone where he has to sabotage certain things so that the shares of that company will drop. If you invest your money in the competitor, you’ll get a load of money out of it. The market is a good addition to the Grand Theft Auto franchise. Now if it would be enabled in Grand Theft Auto Online, that would be amazing. Now that we’re talking about Grand Theft Auto Online anyway: I haven’t really gotten into it, so I can’t write about it too. But let’s be honest here. GTA Online deserves a separate review anyway.

When I started writing this review, I just didn’t know where to start. Grand Theft Auto V is just so big, it’s hard to cover everything. In fact, while I’m writing this conclusion, I’m thinking about things I might’ve forgotten. Anyway, Grand Theft Auto V is one of the, if not the biggest game of 2013. Add Grand Theft Auto Online to that, and you might have the biggest game of all time. With it’s huge game world, extreme humor, over the top characters, blazing (gun) violence, plentiful freedom, overload of Easter eggs and amazing story, Grand Theft Auto V is in a league of it’s own. Besides, what other game allows you to ride on a motorcycle, and then drive around raising your middle finger to everyone you see. Yes, you can do that. I know, it’s amazing. Well, with that being said, let’s put an end to this review. I absolutely love this game, and I think everyone, and I really mean EVERYONE, should play this game. Because once you’ve started, you’re going to be in Los Santos for quite a while. And that’s exactly how we want it.

Sent from my SM-G900V using Tapatalk
A