Back in 2001 when Ico was first released there was scarcely anything quite like it. Perhaps, like many games of the past, it was over-praised for being something different where now it may seem aged – a feat of its time and little else. Now given a re-release and the HD treatment, Ico may just be another example of a developer aiming to cash in on nostalgia. What is strange, however, is that Ico in 2011 is grabbing players in the same way it did 10 years ago, players who are entering its castle chambers for the very first time.


Playing Ico is much like experiencing a dream. You have little idea of how everything has come about, or how you got to where you are, yet everything seems natural, and thus you comfortably proceed through your imagination. The game begins with little explanation, following a young boy named Ico as his captors escort him to a castle isolated upon a misty island. Although normal in every other respect, Ico possesses a feature unlike most boys his age – two horns that protrude from his head. It is because his horns that he is entombed in the basement of this abandoned fortress, and then by a great stroke of luck, is able to break free. Shortly after exploring past the remains of his broken stone tomb, Ico discovers a girl, Yorda, caged high above ground in the neighboring tower. He then takes it upon himself to free the girl, and so your adventure with Yorda begins.

Yorda brings a very unique presence to the game as you guide and protect her throughout the journey.​
Primarily a puzzle adventure, you’ll engage in the typical practice of moving crates, activating switches, lowering bridges, and platforming across gaps and ledges in order to create a useable path for Yorda as you both seek for a way to escape the island. The puzzle process is very well conceived, with only a few possible instances of being stumped for what may turn out to be rather straightforward, yet uncanny solutions. The main question of each area is how to get Yorda in a certain place, and end with you by her side. However, it soon becomes clear that the castle does not wish for Yorda to leave, as shadowy creatures emerge through its stone floors to steal her back from you as the game proceeds. Once again, explanation comes slowly through only a few custscenes dispersed throughout the entire playthrough, and as Ico and Yorda seem to share different languages, there is little dialogue to establish a relationship – yet one is certainly there, and it’s very real.

As told through the game’s brilliant yet simple animations, Yorda is seen as dainty and frail. She looks noticeably nervous as she watches Ico take on courageous feats of heights and leaps, and at the start of the game seems reluctant to trust you. Guiding her through use of the R1 button, you can call out to Yorda when a path is ready, reach out to catch her when she leaps a gap, pull her up to the ledge of a high wall, and most iconically – hold her hand. 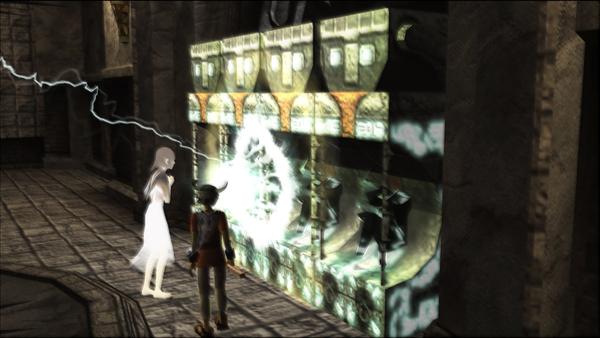 Yorda possess some sort of power that will allow you to push past magically sealed entrances.​
Escorting A.I. companions has become a rather infamous affair in gaming. These segments are often considered troublesome, annoying, and bring the experience of many games to an archaic standstill. With this in mind, it’s very interesting to see how the entirety of Ico is built upon guiding a rather useless A.I. through puzzles, defending her from enemies in between, and yet somehow at the end of it all isn’t reflected upon negatively. In fact, it’s the fragile nature of Yorda, her uselessness, which makes her one of the most interesting elements to be used in a video game.

Your companion, along with the deliberate pace of the overall game and its puzzles comes together in a very moving way when placed within the game’s immaculately created atmosphere. Ico’s visuals more than stand the test of time – they continue to impress, and the immersive art direction only proves to benefit from the HD upgrade. The castle is incredibly lonely; with stone rooms of huge scale where only the crackling sound of torches and the patter of footsteps from Ico and his barefooted friend reverberate off the walls. You’ll witness excellent examples of level design as you explore the castle’s towering walls and courtyards, sometimes backtracking to areas in new and exciting ways. Stepping outside introduces an incredibly bright sunlight that’s both warm and inviting, and the camera pans unlike any other, reaching far across the screen, drifting over enchanting landscapes before you feel its pull back towards the task at hand. No life bars, meters, or text are to be seen. 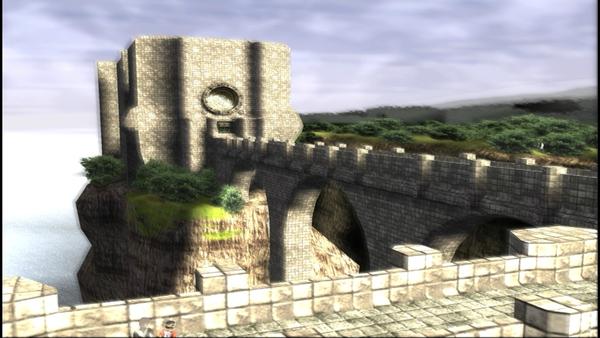 The castle is haunting, and at the same time beautiful.​
Yorda’s pale figure emits a subtle white glow, and she is often seen patiently awaiting your return, her torn dress flapping in the wind while all that can be heard is the breeze and chirping of the birds – and it is at these moments that Ico is most powerful. Gently tugging this sheepish girl along by the hand amongst the vibrantly colored outdoors or empty castle towers has the potential to move players in ways that remains unique even a decade later. It involves a youthful attachment, one that can make you uncomfortable should your companion ever leave your view.

However, it’s not to say that this 4-6 hour escort mission isn’t tedious at times. The camera, though interesting, can give you awkward angles in combat, and jumping to your death as a result of unsure distances and having trouble lining up leaps to narrow chains is a very real, and sometimes frustrating occurrence. The shadowy creatures after Yorda also tend to overstay their welcome, coming in large waves that create a panicky process of running back and forth – at one end trying to wack at enemies who possess difficult to strike hitboxes and rise back up numerous times, and at the other end making sure to grab Yorda before she is sucked into a pool of darkness. Fortunately, the creatures typically only come when you’re not knee deep in puzzle solving. 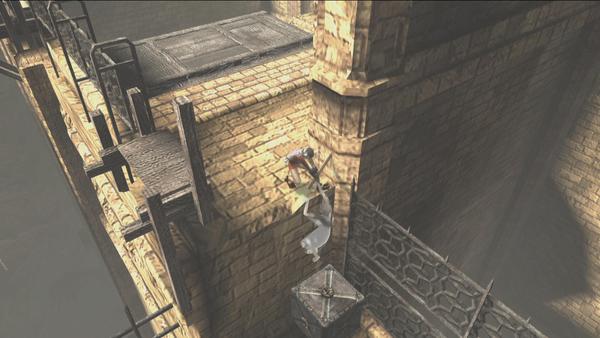 You must solve what's ahead in order to create manageable distances that Yorda can overcome.
​
Despite these annoyances, they bear little weight on what the player will take away from the ultimate experience. The game is very meticulous in its puzzles, and players always looking to swing their stick or constantly leap from ledge to ledge will find the experience resoundingly average, even painful. Perhaps in any other game, waiting for your companion to slowly climb a substantially lengthy ladder – step by step, ever so cautiously as Yorda does – would be an absolutely deplorable experience. And yet you’ll stand there, and wait, not in impatience but with understanding, awaiting Yorda, your bright beacon of hope – two lost youth looking for freedom.

Ico is a curious game to lend judgment to as its experience can certainly vary depending on what players choose to take from it. It’s eerie in its presentation, thoughtful in design, and profoundly vivid throughout. Though created with gaming elements we’re all too familiar with – ledges, ropes, levers, and 3 swing combos – Ico is able to grab at our hearts in a masterfully conceived way. At one point in the game, Yorda will periodically stumble to the ground as you try to run her along at your usual brisk pace. What is perhaps the greatest example of the effect this game has on its players is that some will, at this moment, slow their pace. Not because it is more efficient to do so, but because she is in pain – this fictional A.I. character with no usefulness about her is in pain, and it concerns you.

Wow! Welcome to the forums AND the Community Reviews! Great review too! Man, the review was your 4th post, that's awesome. I'll add it to the index now.
D

Awesome review!! I never hheard of this game till now! I may have to give it a spin.
K

Smh at D the games been around 12 yrs! :lol:
Great review new guy it's a great game loved it as well. would probably give it the same rating.
S

Nice review, well written. I loved Ico the first time I played it all those years ago, such great memories! Welcome to the forums and hope to see more from ya in the future.
U

thanks for the kind words guys! i've got some other older pieces but i'll try to keep to recent stuff. hope to be an active contributor and look forward to checking out other people's work as well.
F

I loved Ico and Shadows of the Colossus in HD on the PS3. And there is so much more detail to be seen when in HD too! I would give it a 10/10 as well.
G

[QUOTE="upmagic, post: 5980165]thanks for the kind words guys! i've got some other older pieces but i'll try to keep to recent stuff. hope to be an active contributor and look forward to checking out other people's work as well.[/QUOTE]

If you enjoy writing, and especially about video games, then you have certainly come to the right site. Continue to enjoy the CR section and stay tuned for developments to PSU's community writing opportunities.
3

[QUOTE="Ghost-Rhayne, post: 5979962]Wow! Welcome to the forums AND the Community Reviews! Great review too! Man, the review was your 4th post, that's awesome. I'll add it to the index now.[/QUOTE]

I second this, awesome review and good to see you here. Welcome!!!
D

This is one of the most thought out and genuinely heartfelt reviews on the site. Keep it up and feel free to post your older works! It doesn't have to be recent.

Also, welcome to the forum
F

You described the concept of the game with such great detail. My compliments to you!.
M