Platform(s): Playstation 3
Publisher: SCEA
Developer: Insomniac Games
ESRB: M
​
This is the third and final installment in the Resistance trilogy for the Playstation 3. The story picks up after the events of, Resistance 2 in which the final stand of humanity against the near-invincible Chimera, manage to fire a fission bomb on board the leader ship to destroy a key fleet that was concentrating in the Gulf of Mexico. Uncertain of the outcome, humanity was sure of victory but what came after was the beginning of the end.

The hero of both Resistance games: Lieutenant, Nathan Hale became consumed by the experiments done to him (Project: Abraham which injects a special modification of the Chimera virus to turn them into super soldiers - though with unfortunate side effects: Clovens, that destroy their reasoning abilities an become enemies of both Chimera and Humans yet hold unique abilities); Ultimately he was beyond human at the end, forcing Capelli to retire him for good.

But his death was not in vain. Nathan Hale had forged a vaccine within himself that can combat the virus, making humanity immune and saving them from becoming the monsters that had ravaged the world. A world that had either taken the lives or transformed more than 90% of the human population. What's left are Chimera without much purpose other than exterminating the rest of humanity and people struggling to survive against them.

Depressive way of living, people do what they can to live another day
​
You take on the role of Joseph Capelli, the man responsible for slaying the previews protagonist and former sentinel in SRPA that was once dedicated in exterminating the Chimera threat. Now after years of limited resources and hardships, he was reduced into a thin and weak man compared to the intimidating young warrior when he was serving his country. Susan, Nathan Hale's sister, became his bride and gave birth to a young boy who is threatened by common diseases.

The towns people they share their lives with had dug themselves underground, leaving the town above void of life in an event that Chimera's would pay them a visit and disregard it as just another derelict area. Unfortunately they do find them. Everyone is trained in preparation of a Chimera threat. The notion of getting discovered by Stalker war machines with innocent lives hiding right on your shoulders can feel daunting.

What you'll come to discover at first glance is the transformed environment after years of warfare and mismanagement; The obvious signs of scarce food and power that shows no guarantee of long lasting life; Men, women and children showing signs of weakness and malnutrition. All of this is the aftermath of an apocalyptic event with a race of killers seeking your death. A revolver can take on anything, including a Stalker mech that can destroy tanks!
​
While things seemed to be going as planned, the Chimera were well aware of your presence and launch an offensive against the survivors. Unlike the last, Resistance game, you are granted the Weapon Wheel which lets you circle through arms you've collected in your journey. Each one has a secondary use such as the grenade launcher for the Carbine and homing tag for the Bullseye. The weapons you'll obtain later on will have a wider range of effectiveness along with simple upgrades to make them more efficient.

As you defeat the scouting team, Joseph attempts to eliminate the rest that pose a threat in the area but comes to the realization that they are severely outgunned and outnumbered so they rush back home to evacuate the populace but not before encountering a towering, Goliath and a number of elite Chimera troops (Note: It's impossible to take down those 300ft mechs). 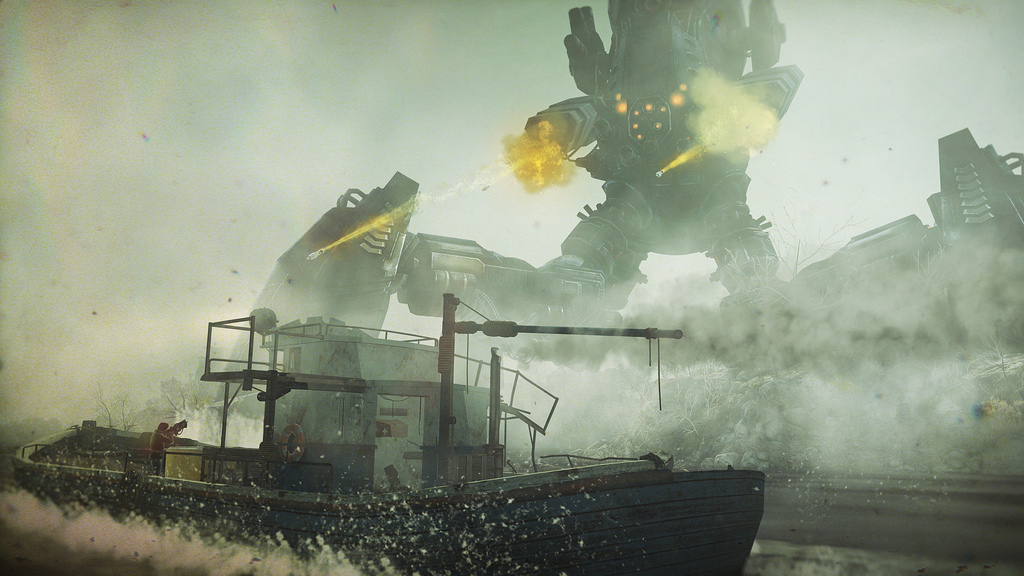 Fishing boat vs a massive Goliath
​
After reaching home base and explaining the situation, you discover the crux of their compromise: Fyodor Malikov (Best scientist in the world with the understanding of the Chimeran virus and technology; Responsible for the Abraham Project; Gave birth to the main antagonist of Resistance 2 and created the Cloven). His presence is not welcomed by, Joseph but his appearance was due to the cooling tower in, New York beginning to create a global cooling, assuring the extermination of all life, excluding the chimera, within a year's time.

After a last stand before the townsfolk evacuate, he is convinced to travel with Malikov in an attempt to stop the tower from killing everyone, including his family. But reaching their destination will be a long trek from escaping Goliath mechs in the river; challenging a monstrous Widowmaker that is in war against armed Chimera; going through a Grim infested town and venturing in the vast, cold environments. But your journey is not walked alone as survivors will lend you aid in exchange for giving a helping hand. You must go through a deserted, grotesque town filled with Grims in order to find a person of interest
​
While Chimera are indeed the main threat here, cannibals are to be expected in this scenario, making you realize the twisted side of humanity as eating Chimeras will run them the risk of infecting them so human meat, untouched by the disease is good enough to fill their stomach. Sometimes they use other survivors as entertainment to watch Grims devour the living.

But while some parts of the game depict a struggling race, it is drowned by shooting and narrow pathways that hardly give you room for discovery. Radio messages show hints of fighting resistances worldwide and notes you find gives you little insight of the world around you. The experience hardly elaborates on the theme they're going for. Joseph is also almost non-existent throughout the game until you seen him in cut scenes but even then you'll find that his journey has little substance and just goes on from point A to point B. 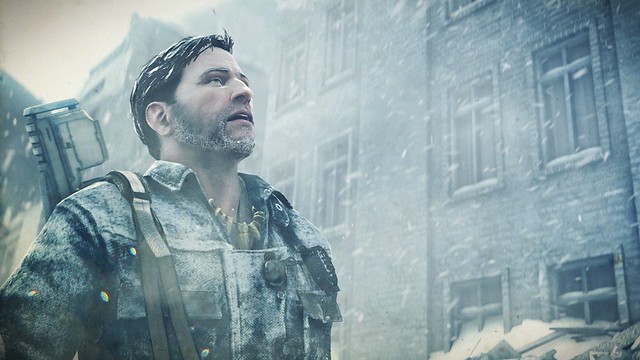 Capelli arrives in, New York. His expression foreshadowing a poor ending!
​
While you want to find the ending to be the rewarding part of a journey, it just ends without much explanation with no answers given that Resistance 2 left behind. They drop you hints and theories but nothing is told, leaving the end of a trilogy a tragedy to story telling.

Overall
The Resistance universe is rich in mystery with an alternate history before World War II had a chance to manifest. Resisntace 3 has a different pace compared to the military-centric Resistance 2 but fails to keep the theme going and instead becomes another run and shoot game with linear pathways and dry story telling. It's a good first run for fans of the series but you'll be greatly disappointed by the lack of answers the previous game had left. If you're not a fan, I recommend you invest your time elsewhere.

Good and Bad
+ Weapon Wheel is back, giving you a number of awesome, unique weapons to choose from for any situation
+ AI is impressive. Chimera will jump walls, rush you while you're reloading and even jump on grenades to save their comrades
+ Soundtrack fits the theme nicely

I haven't played Resistance 3, just another game in my backlog. But that's disappointing to hear the ending to the trilogy is crap. So happy the weapon wheel made a comeback, the 2 weapon max BS is something that usually bothers me in FPS games. Good review, and indexed!
F

[QUOTE="Sir_Scud, post: 6059328]I haven't played Resistance 3, just another game in my backlog. But that's disappointing to hear the ending to the trilogy is crap. So happy the weapon wheel made a comeback, the 2 weapon max BS is something that usually bothers me in FPS games. Good review, and indexed![/QUOTE]

Thanks, manager. I really wanted, Resistance 3 to be great with questions we had answered to conclude the trilogy. But nothing. This universe had a lot of potential but they wasted it. If only they had a capable director for this game.
S

I think Resistance in general had a really cool idea going on. The first game was pretty solid, second had an incredible ending and then from you and others I hear the worst about 3. If I had to theorize why, I feel like insomniac's heart wasn't really in it anymore. I think they really just wanted to move away from the IP while developing it.
D

Resistance 1 was one of the worst games I have ever played on the PS3. I got to about half way through the game and will never play it again. I do want to buy 2 and 3 and give those games a go in the future sometime.
M

Resistance 1 was my favorite. R2 and R3 kinda sucked. R3 was better than R2 though but thats not saying very much. I can see why this series was a dismal failure and therefore dropped like a bad habit. Maybe if a better developer were to take it over they could do something good with it.
A

Dunno how you can't prefer R2s online to R1.

IMO R1 was the worst tbh but I'm in the minority.

Actually quite like the story and its resolution on the world. It's too bad R2 was poorly handled that R3 couldn't really fully recover from it.

I think R2 actually had the best campaign. It had very cryptic, subtle storytelling that really drew me in and kept me theorizing about the third game.

But then R3 didn't answer most of the questions and I was disappoint.
D

IMO R1 was the worst tbh but I'm in the minority.[/QUOTE]
R1 had the best online from all 3 R2 online kindly sucked but had the co-op

R3 online was the worst from all 3
T

The Hill Is Silent

Actually in the middle of playing this. At Chapter 10, and there's no denying that it's good fun with a really unique set of weapons. But I'm finding the enemy design to be completely underwhelming and predictable (I know the Chimera are in all three games obviously, but this seems a real rinse and repeat from R1).
K

Resistance 3 was awesome for me, however i found R2 to be more exciting, bigger boss battles and stuff. its a shame that the series has ended though as they had so much untouched potential. The whole Feral VS Military Chrimera could of made an awesome storyline for a spinoff title. Same with old James Greyson, he was epic, and he vanished off into russia.
D

RFOM was awesome, played that game for like 2 years straight until Resistance 2 came out. Never had a sequel dissappointed me as much as R2. It was a completely different game, they changed it so much it and tried to make it a COD clone, that it just didn't feel like a sequel.

I haven't even bothered playing Resistance 3. I played the game at a friends house and was, again, dissapointed by the online mode. I might pick it up really cheap or borrow it from a friend to play the single player, so I atleast know how the story ends.
You must log in or register to reply here.
Share: Facebook Twitter Google+ Reddit Pinterest Tumblr WhatsApp Email Link
Reply