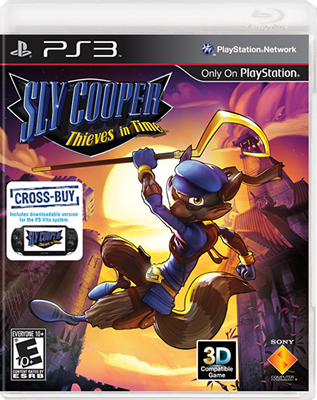 Sly Cooper originally debuted on the Playstation 2 back in 2002 and was developed by Sucker Punch Productions. I think many passed up on Sly Cooper for the more popular open world platform games such as, Ratchet & Clank, and Jak and Daxter. Luckily for gamer's who decided to pass this up on the previous console, there would be an HD collection released on the Playstation 3. Sucker Punch was working on their inFamous games, so Sony let Sanzaru Games do the HD port for them. Sony was impressed by their work, and decided to let Sanzaru Games develop Sly Cooper: Thieves in Time. But could Sanzaru capture what made the original series so good? Continue with the review and try to decide for yourself...

Sly Cooper: Thieves in Time is a beautiful game. The rich and vibrant colors really make this cell shaded game stand out. I was pleasantly surprised by the draw distance in each episode. You can pretty much pick a high spot and overlook the entire area. The game runs very smoothly and I have not noticed any frame rate issues, or screen tearing.
The voice acting is very well done as always. The original cast of voice actors return and that really helps those who played all the previous titles, to fall back in to the Sly Cooper realm.
All the sounds you remember are also back. Everything from the tip-toe sounds, to the jingle that plays when you find a treasure. Throw in some newly added music, and you have a really solid score. 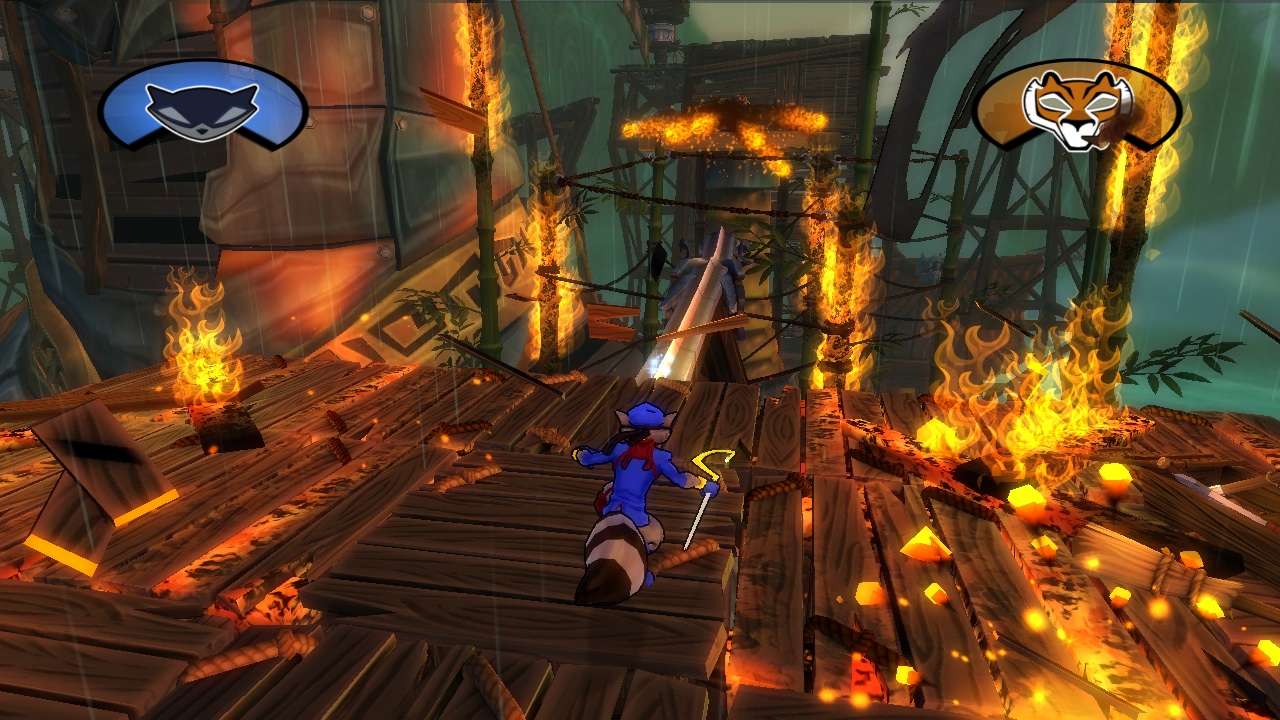 There are many characters to play as this time around. In addition to Sly, Bentley, and Murray, you will also get to play as Sly's ancestors. Each episode will unlock a new character in which you will need to uncover all the hidden treasures and such. And of course you will use these new characters to complete the main story. Each character has a their own set of moves, and special moves. Sly can glide, Bentley can blow things up with grenades, Murray can pick up objects and throw them, Rioichi can leap great distances. Those are just a few of the things that separate the characters.

Basically Sly and the gang need to use Bentley's time machine to recover the missing pages of the Thievius Raccoonus. This book has holds all the secrets of the Cooper family, and this is why the gang needs to time travel. To find out why these pages are mysteriously disappearing. And you will need the help of Sly's ancestors to do this.

Throughout each episode, you will have the option to locate all the bottles, masks, and treasures, which are hidden all over the world. Finding treasures will eventually allow you to unlock hideout arcade games. These are basically mini games that you will eventually run in to while playing through the story.

Each episode is located in a different area, at a different time in history. Each era, whether it is set in Japan, or the Wild West. You will receive a new wardrobe which help you get through your list of tasks. The extra set of clothes also play a large role in defeating the boss at the end of each episode. Most of these boss fights will require you to switch from one set of clothes to another in a timed fashion. Some armor will protect you from heat and such.

The Playstation Vita version of Sly Cooper: Thieves in Time, is exactly the same game as the PS3 version. You can play Sly on your PS3 and upload the game save to the cloud. Then you can load up Sly on your PS Vita, and download save file you uploaded to the cloud. Now you can continue exactly where you left off. This works both ways too. Trophy hunters will love that any trophies you unlocked on your PS3, will automatically unlock your PS Vita once you load up the shared game save. This will give you double the trophies.

This is my favorite part of the cross-play feature. While playing Sly Cooper on your Playstation 3, you can turn on your PS Vita, load up Sly Cooper, and then click the AR Server option. This will sync your PS Vita to your PS3 and allow you to use your Vita to help you find all the hidden goods in the game. Another person will use the Vita and basically they will see what you are seeing on your TV, but the Vita will see it in sort of a night vision way. All the treasures will glow yellow, and the person operating the Vita can touch the treasure, and you will see a marker appear on your TV, showing you where to go to find the hidden item. This helps out so much when looking for all those bottles and masks.

I love how you can replay certain jobs, or revisit entire episodes in general. This gives you the freedom to play the game how you feel like playing it. PS3 owners get the Vita version for free, which is an amazing deal! And the ability to actually use the Vita to benefit you in a way that I personally have never seen before, is just awesome! I think Sanzaru Games did a fantastic job with their first shot at the Sly Cooper franchise, and I am sure we will see much more from them in the future.

The PS Vita handles the game very well, and I have no problem switching from the PS3, over to the PS Vita. The Vita replaces some of the missing buttons with a couple touch screen icons located on the bottom left and right hand corners of the screen. The cut scenes are also compressed, but that is to be expected seeing how the PS Vita game cards only fit 4gb of storage. At the end of the day, I am pleased with both versions equally.


Pros:
PS3 owners get 2 games for the price of 1
Outstanding use of the PS Vita cross-play feature
Cross-game cloud saving
Many hidden items increase replay value
Freedom to choose how you play each episode

I played the demo and was actually really impressed by it. I never played any of the Sly games, like you said I was one who opted for Ratchet & Clank instead. Bentley's voice though, got on my nerves. That's cool there are more characters than the original three, Murray was probably the most boring to play.

Cant find it in your review, but can you tell me is each episode/segment repetitive? In The first sly games you had to do pretty much the same tasks in each one before you were able to go after your objective. It got really tedious and boring after awhile.
D

It's not out here yet, but once I finish Sonic Transformed on Vita I'll most likely get this to play on it. I could go for the PS3 copy but I doub't id even bother play on my PS3 so I'll save the cash and just play on the go