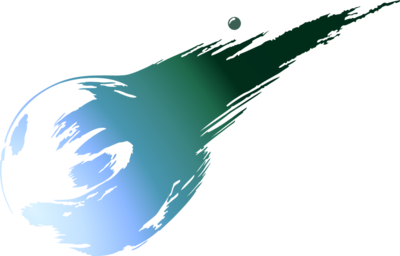 Final Fantasy VII review
SquareSoft, 1997​
Final Fantasy VII spans across several forms of graphical perspective, all introduced not more than a few minutes after selecting a 'New Game' with that squeaky, white gloved cursor. In truth, it's not at all different from Squarsoft's usual avenues of storytelling: an opening movie sequence, an explorable environment, and finally a battle screen. Now leaping to 3D, however, the context switching between the three looks nothing short of audacious. CGI pulls a camera sharply away from the city of Midgar, a bleak and unquestionably Japanese image of science fiction. Barreling across the slums and upscales residences, towards the power reactors that run the piped fortress, a train arrives at its destination as the movie stills itself, its static image becoming the background for the game to be played upon.

Leaping onto that gritty movie frame is a brightly colored, purple mess of blocky polygons named Cloud, an elite but retired soldier, now mercenary to a passionate group of activists labeled AVALANCHE. Before you can get a hold of the confusing visual stimuli, however, Cloud will run into his first random battle encounter, smearing the screen once more to a new representation. No longer a boyish looking clown of pixels, Cloud stands tall, giant sword in hand, a spiky haired 21 year old lined up with his employer, Barret, a hulk of a man with a gun grafted for an arm. Just like that, Final Fantasy VII trades its goofy lego figures in for more anatomically sound heroes, then engaging in over the top, turn based anime action. 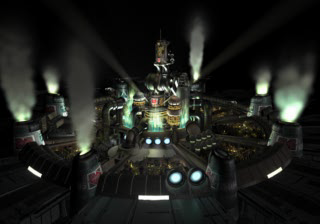 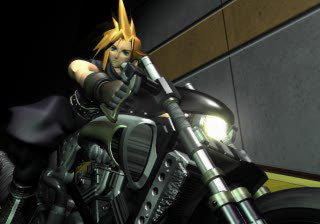 Getting over the enormity of that constant transition takes time. Given the grim premise and sullen main character, watching textbox dialogue between quirky caricatures with limited animation and forms of expression can be awkward. Cloud shrugs when he talks, Barret flails his arms and cusses through a language filter, and though the game experiments with a lot of cool camera angles, many insist on zooming up on these lacking models, only doing them more disservice. An already melodramatic script covering topics of mass murder, suicide, and the terrors of genetic engineering, it can appear damaged by the childish look of the sprites. A crummy localization is partly to blame, but watching a little dude curse his life and the entire world as he fires his gun and jumps off a cliff is undeniably -- if unintentionally -- hilarious.

Unfortunately, there are more than just a handful of such moments throughout Cloud and company's quest to battle the corrupt power company, Shinra, a corporation whose monopoly on the planet's life energy has lent them control of Midgar, and in turn, the entire world. Oddly (or perhaps appropriately), however, Final Fantasy VII is largely comprised of comedy. For all its depictions of terrorism and armageddon, it jumps from drama to humour without second thought. Sometimes that can be only more jarring, where immediately after the aforementioned suicide, for example, the plot leads Cloud to jockey a horse sized chicken race in a carnival reminiscent of Willy Wonka's wonderland.

Though its wild experimentation may forget its timing, the humour is more often inviting than not, poking fun at the strange graphics. Clouds sets a cold tone with his "I'm here just here to get paid" indifference to the world's problems, but he is quickly neutered of any personality afterward. He nods along with others' ideas for half the game, his vagueness opening opportunities to stand him in for whatever outrageous role is required of him. He'll dress in drag and threaten to cut the balls off a pimp, enter a squatting competition against the jocks of a rundown gym, and get some mean air on the snowy mountains of the North Continent. He pretty much exists to do entertaining things, the mystery behind his true identity the dark and focal point of the game. 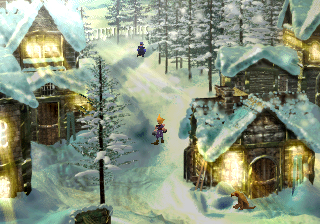 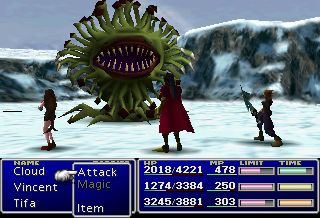 Understanding when to take that plot seriously would depend on its cues, namely, the musical ones. Uematsu's strongly varied contribution guides you among the countless and unique backdrop environments, all host to stunning detail, so much so that Cloud's beacon of bright ugliness makes for quite an excellent marker. Otherwise it'd be rather easy to lose yourself in all of Midgar's grimey, graffiti stained junkyards and Shinra's intricately plumbed, gear churning reactors. Up and down vines and ladders, through ant farm like dungeons and hidden caverns, you'll follow a lot of methodical, mysterious tunes, periodically interrupted by a catchy and heart lifting battle track. Then, with pockets full of new equipment and magical marbles called Materia, perhaps you'll leave those dungeons, towns, and temples to greet the world map again, squeaking through your character sheets as a majestic ensemble cradles your thoughts. 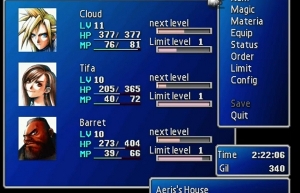 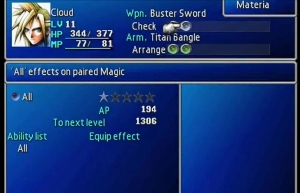 Indeed, Final Fantasy VII really is a bundle of the simplest pleasures, the Matera system in question being in no ways elegant, yet at the same time, completely accessible. The colored spheres socket into the weapons and bracers of your 3 person party, lending their corresponding magic to your characters' move lists. Basic Elemental spells like 'Fire' and 'Ice', as well as Command abilities like 'Steal' should paint a fairly clear picture of the ideas at work here, but there's also some cool modifiers like the 'All' type Materia. Link it with another type of magic, and you can then target multiple enemies (or allies) with that spell. Such creative workarounds are fun to discover, can often prove powerful, and lend a child like imagination to how you battle through VII's world.

As far as character roles go, they do become blank Materia boards for you to customize and switch around, but Nomura's artistic direction combined with flashy ultimate attacks set them well apart as individuals: A tribal feathered, talking lion, a shrimpy girl that fancies herself a deadly ninja, or an aging pilot with dashed dreams. Or Tifa, the spiked knuckle bartender, a pair of red work boots to match her clenched gloves. The game is total punk. And while you can have Tifa dash up for a clean one-two melee, she could also be your black mage, the powerful gust of a spellcast billowing her hair upwards as she ravages the opposing field with lightning. Pick your favorite characters. Play with their identities. Enjoy yourself.

That can seem like the overlying point of Final Fantasy VII. To take it in stride. Boss fights don't have much to show for challenge, the difficulty falling in line with the comical stage play. Whether facing fat businessman and their killer robot toys, or disguising yourself among Shinra's ranks to win viewer ratings in a televised marching parade, the power company becomes more amusing a villain than the genocidal kind it's touted as. Their stormtroopers, the Turks, come onto the screen accompanied by a cool snapping of fingers, fully self-absorbed in the trendiness of their navy blue suits, your rivalry with them viewed as somewhat of a parody, paling in comparison to the world's actual dangers. 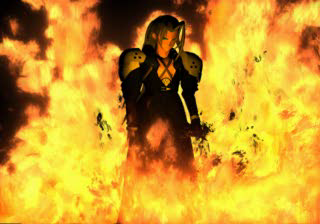 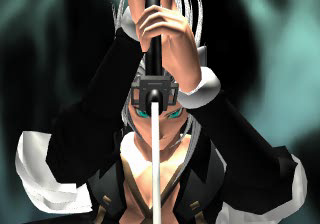 It's only when the music reaches its lower octaves -- the darkest pitch of the piano -- that Final Fantasy VII sheds all its silliness in not more than an instant. Demonic pipe organs scream through the PlayStation's MIDI soundcard, a sense of dread shadowing the true villain, Sephiroth, a supersoldier never once treated lightly by any of the game's charm. An old battle buddy of Cloud, his presence makes profound use of Final Fantasy VII's combat screen as you meet him for the first time in a flashback sequence. Cloud, who hits for a measly, say, '64' damage, fights alongside the towering, silver haired man, who rips into a monster for thousands. For all it's dependence on visual variety, it's a high damage number that truly sets the most somber tone. It allows Sephiroth to single handedly haunt your adventure, popping in and out, leaving trails of blood, corpses, and questions -- mainly concerning Cloud.

What surrounds these two characters and the world they inhabit is an overwhelming theme of robbed humanity. Brought about by science, greed, and corruption, the emptiness of Final Fantasy VII is remedied by its frequent sparks of humour, but ultimately hints at a looming loneliness, laughing in the face of eventual destruction. It's a kind of doom that both Cloud and Sephiroth face, the only difference being who surrounds them in their time of need. While one loses himself in the horrors of science, clinging to a monster for acceptance, the other must look to friendship. And though VII's characters really aren't much more than mouthpieces for encouragement, their cheering punctures something primal and warm. Something worth hearing in a game well worth playing.

I love your explanation about all the dark and underlying themes.