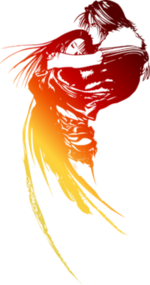 Squall is nearing the end of his studies at Balamb Garden, a campus host to mercenary youths who study combat skills and magic as everyday course material. Here, girls can still be found gossiping in hallways and boys picking fights over petty insecurities. For Squall, those childish urges leave him a scar, a nasty gash across the face from a rival classmate’s gunblade, the weapon itself a true representation of the bizarre balancing act that is Final Fantasy VIII. Where realistic and familiar components – a blade and revolver -- combine to make something new and incomprehensible.

In its attempt to mesh the realities of high school life and military regiment, Final Fantasy VIII creates a premise -- like the gunblade -- beyond belief, but of rich fantasy. Squall’s first mission is actually just part of his school’s curriculum, a field exam where students raid the beaches of a city under military occupation. The whole segment is a complete rush, battle screen to battle screen as heroic music bites at your heels, although afterward, it’s back at school with an impatient and obnoxious group of kids, waiting in corridors for test results to be posted.

The game is often surreal in this way, a sort of boyhood fantasy come to life. Daringly realistic in its depiction of the growing pains of youth, but wholly unreasonable in the situations it places its cast of young adults. Childish moments during grisly missions may have you ready to flip the nearest table in disgust, and there are many. These youths showcase no qualifications to be soldiers, just the naivety of their age. Only when they are linked with what’s called a Guardian Force do they become a group capable of saving the world.

These guardian beasts form what’s called a Junction with their human counterparts, opening up customization options for your party. Of these, the Draw command serves most valuable, since in Final Fantasy VIII, enemies hold the magic. Drawing allows you to steal spells that when stored can be attached to the stat sheets of your party members. A turn based system under an active time frame; you must decide when to pull magic, and when to deal damage. The more you collect of a spell, the more it benefits the stats of say, Strength, Magic, or elemental modifiers to your strikes. 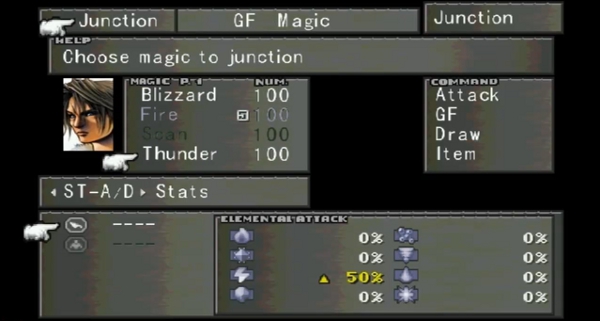 Drawing is rather gratifying, both in its colorful, sucking animation on the battle screen, and how it makes your characters stronger in the menus afterward. But it's also daunting. Each person can hold a 100 of each type of spell, so collecting maximum amounts of Fires, Blizzards, Cures, and others can become a nightmarish grind if you pursue it. And when many creatures don’t bear much in the way of teeth, you don’t really have an excuse not to drink your fill from their temptingly infinite reserves.

Addicting, perhaps -- raising your stats to premature levels of dominance -- but the system’s fragility will take a toll on your experience in one way or another. Powerful spells can be collected at certain points in the game, such as the Life magic that can triple your party’s HP amounts early on. Savvy players that figure such tactics out will later find themselves facing encounters of little value, where in fact it’s smarter to run away as leveling scales you with the rest of the game’s enemies.

Conversely, those who can’t wrap their head around the freedoms of the Junction system will end up either drawing everything in sight, or clinging to what works early on – summoning. This means calling an actual Guardian Force, thus a torturous, 20-30 second long cinematic attack. With Junctioning stats being the more rewarding and effective way to power, it’s odd the game tries to push you towards a reliance on summons at the start, providing little in the way of helpful hints to playing properly. Enjoyment is instead dependent on player strategy, both an intimidating and refreshing idea, and luckily for some not a huge focus. Large dungeons are in fact nearly non-existent, so rarely does the system get laborious. 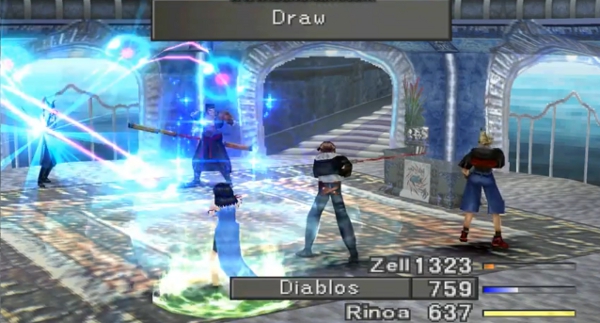 The typical cast of intolerable child heroes also seem to have a ghost of presence, largely ignored by both Squall and the game. Never of primary concern, it’s as if they exist to annoy the main character. Squall is a blunt professional who hates small talk and petty social obligations, and to great relief of likely most players, he becomes agitated when you would. A relatable and adult minded person placed in absurd situations, he points out the very outrageousness of the game around him. When you feel like facepalming, you may be surprised to see Squall do so first.

Taking advantage of this amusement, the game is primarily comprised of light hearted skits, scenes of dialogue that move with very lifelike animation, obtuse Japanese humor, and fantastical set pieces. It runs with its imagination and never looks back, rampantly day dreaming. Here is a world where simple fishing towns reside on one continent, and futuristic cities, hover cars, and fluent space programs on another. It introduces huge plot elements at the drop of hat, nonchalantly informing you about its theories of telepathy, time compression, and out of body experiences. At one moment you’ll be hijacking speeding trains with a group of rebel misfits, and the next shooting up to orbit.

Yet often too fantastical to believe, the game seems eerily aware of its own incredibility. Even its soundtrack -- of Uematsu's best work -- is a combination of the dreamy and nightmarish. It hides something beneath its outlandish narrative and unorthodox battle strategy, something more real and down to earth. That is, a clear inspection of an introverted young adult. As if using its fictional qualities to disguise its true intentions, the game drapes Squall and the player underneath its decorative wings of fantasy. As you both take note of its unbelievable nature, you are gradually being lured out as subjects of study. 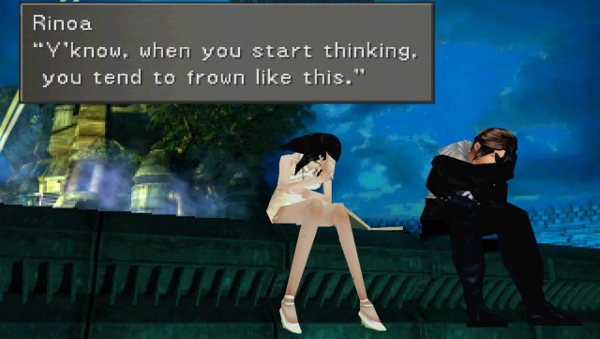 Beckoning you from your RPG is a girl, the romantic interest that takes hold of Squall’s life. She defines Final Fantasy VIII not merely as a love story, but rather as the theatrical, musical, and visual trip it is. She resides in it as the game’s obsession, the idée fixe that tears apart the mind of a man forced into a heroic role without the mental strength to succeed in it. Always challenging his cold approach and mathematical demeanor, she annoys him as much as the others do, but relentlessly and adorably. Dismissing her as well as his own feelings, Squall takes her presence for granted; eventually finding himself uncharacteristically bereaved when she is placed in danger.

In this telling scene, Squall’s crew is again ranting on about the insanely crafted conundrum of a plot that surrounds them, but here the screen fades to dark. Dialogue boxes continue to pester your view, but now scatter around Squall’s thoughts. His appear squarely at the center of the screen, and are clear: this girl is all that matters now. And from here to the end, his battles will be fought over a regretful conscious. As he reaches for her the game becomes more and more incredulous, to the point of utter psychosis as you face villainess witches that drip with personal foreboding. The finale -- a chilling introspection to a repressed mind. 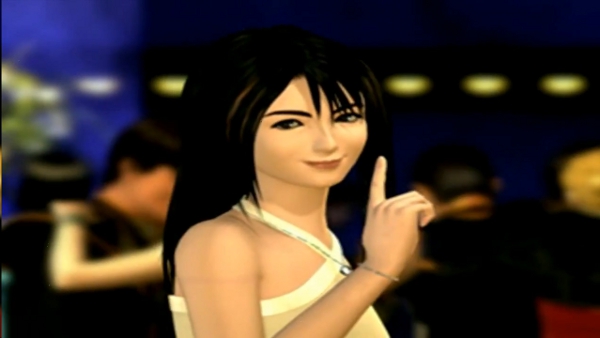 Indeed, there’s something about the girl named Rinoa Heartily. The way she ardently struts towards your removed world of fantasy, invading it with her dark eyes and conceited smile. Pressuring you into decisions and confrontations throughout the game, she drags you from the comforts of role playing escapism and into self-analysis. In a world of elite magical soldiers, evil sorceresses, brilliant mythical beasts and time travel, she remains tangible. A comforting constant within a schizophrenic universe, she pulls you by the arm towards emotional clarity. Onto the ballroom floor and into the spotlight, “I can’t dance” isn’t a response she’ll accept.

Well written and very passionate. It was interesting to read another person's perspective of the game. While I didn't mind much of the quirky moments, the main focus for this story revolved around, Squall and Rinoa and I do believe that the developers had this concept in mind from the start.

While the other characters were hardly touched on, Laguna was especially focused on as well and I enjoyed his backstory more then everyone else', mainly because his was short yet it held significant value, to me, far more then anyone else.

The rest is spot on with my experience. The draw system was fun at first but became a drag after a while, regardless the story and soundtrack gives it enough merit to make it great.
D

I don't have much of an opinion on this as I only started it last year and still haven't finished it :lol:

@Fon, thanks for reading, this was actually my first time playing the game so I like to think my feelings on it are genuine and not clouded with nostalgia or anything. Was overall really surprised with how playable the game was after all these years, and the translation was also pretty solid. I also loved the Laguna segments, didn't have room in the review to spoil those though!

@vincent you should start it over =]
S

Good read man. I felt the Draw system and Junction system were both great, but heavily flawed. As for story, I felt the whole first disc is one of the best FF games ever. Afterwards, I was really disappointed in the direction the game went and only found bits and pieces throughout the rest of the game well done.

I agree when you say it's Uematsu's best work, I love the soundtrack.
K

Grat review currently still playing on vita I have never beaten this before.

This review is good for those who have played the game already, but I certainly would not want to read that before playing. lol
D

Maybe add some spoiler alerts in the review?
K

Excellent review, upmagic. Your intimate examination of the game as a metaphor is incredibly appropriate, given its age and how thoroughly its simpler aspects have been talked to death over the last decade.
You must log in or register to reply here.
Share: Facebook Twitter Google+ Reddit Pinterest Tumblr WhatsApp Email Link
Reply