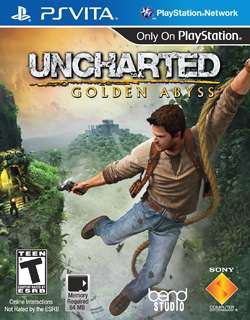 Release date: 2/15/12
Price: $49.99 ($44.99 downloaded)
​
Naughty Dog is easily one of the most respected developers in all of gaming. They have a huge list of accomplishments such as, Crash Bandicoot, Jak & Daxter, Uncharted, and the upcoming future hit, The Last of Us. What would happen if another developer took over these projects? What would happen if Bend Studio made Uncharted? Well, that is exactly who created Uncharted: Golden Abyss. Continue on with the review and decide for yourselves, was this a good idea for Naughty Dog to let another developer tackle the Uncharted series?

From the very beginning I was instantly getting the feeling that I was playing on my PS3. Nathan Drake looks fantastic and it seems all of the character details and animations are present. I should also add that all the character look fantastic, not just Drake.
The levels so far make me think of the original Uncharted. Lush beautiful jungles really show off the power of the Vita. When you are at a spot where you can see the horizon, you can sort of tell that the background sort of looks like a backdrop. In the far distance you can sometimes see a flock of birds flying which really add to the depth.
The shadows and lighting really look great on the Vita. Everything looks very smooth with hardly any jagged edges.
What is really impressive is how great this game looks as a launch title. I have no doubts that the Vita will get many more Uncharted games with each one improving in graphics. 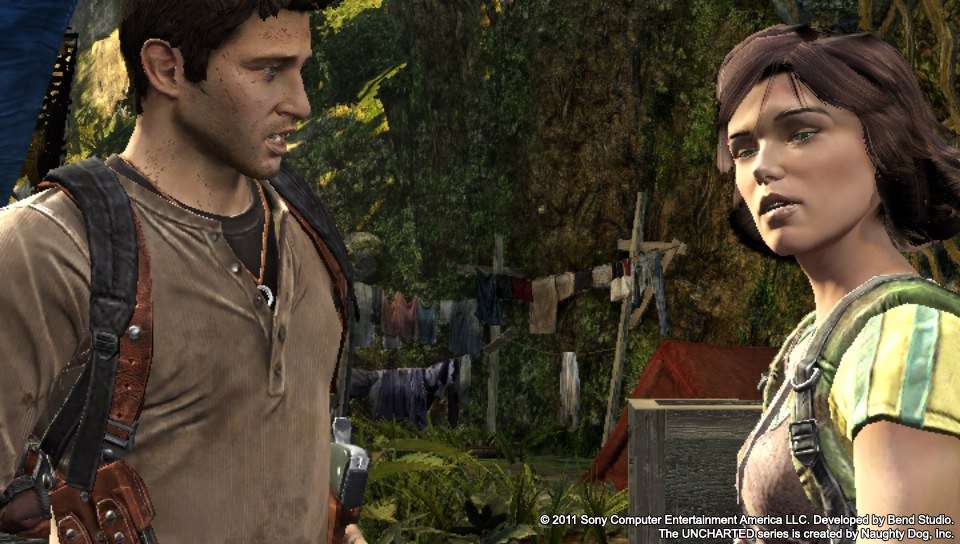 It seems Bend Studios learned a thing or two from Naughty Dog. The sound quality is as good as any of the previous Uncharted games. A fantastic soundtrack and motion picture quality voice acting. Nolan North reprises his role as Nathan Drake of course.
Toss in some ear buds and you get amazing sound effects from bullets and explosions. 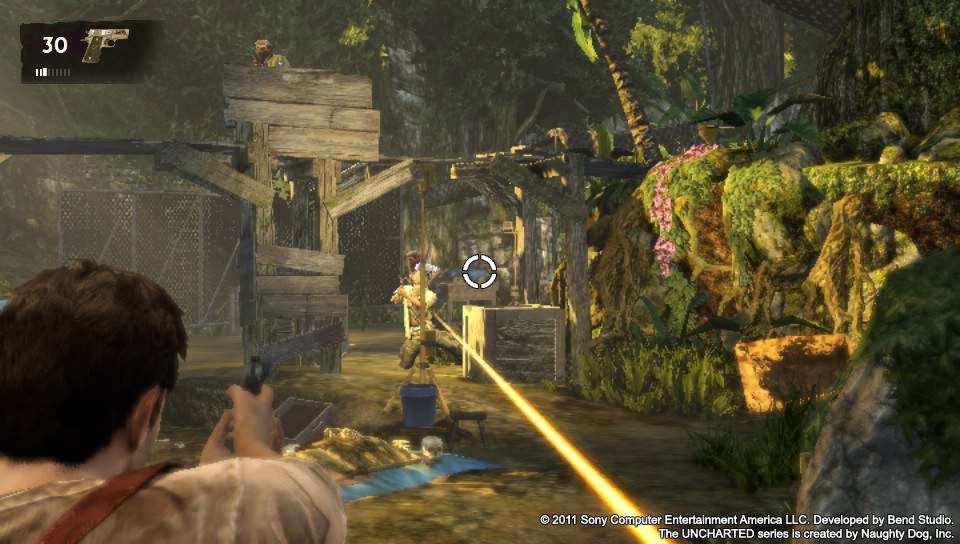 There are some new features in this Uncharted game that really set it aside from all the rest. One of the nice new features is your camera. To earn awards and trophies you must take certain pictures. Each level will have some photographs and as you are playing you will need to find these areas and snap a shot. You are graded by how accurate the picture is to the original.

Climbing can now be done with the touch screen and rear touch panel on the Vita. Climbing walls can be accomplished by simply pressing on the areas you want Drake to climb. You can also do this in a swipe direction which causes a chain reaction allowing Drake to get to his destination with one single hand gesture.

Rope climbing can now be done using the rear touch panel. Use your fingers in a climbing motion to get Drake to climb. This tends to give the gamer a simulated feeling of climbing.

Sniping is pretty neat as you can use the motion controls built into the Vita. As you look down your sights, your screen becomes a large reticle and you move the Vita around to aim your gun.

The dual analog sticks certainly take some getting used to. You have a much smaller field of movement so it does not take much to get the camera to move while aiming or walking. This will slow you down as you try to get those headshots and such. I also noticed how close the right analog stick is to the X button. This can cause you to accidentally hit the wrong button or once again, slow down to feel where the X button is. This is another reason why I prefer using the touch screen instead of using the traditional button. 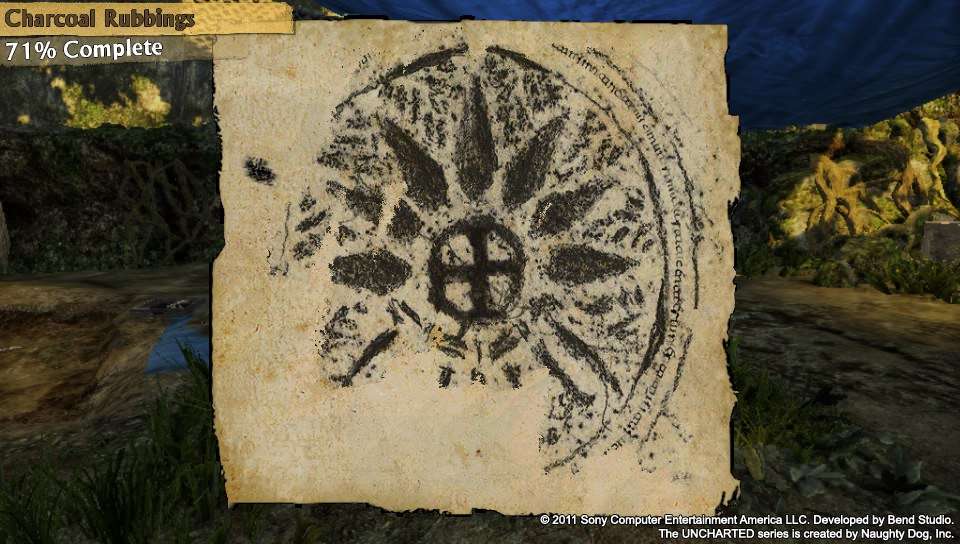 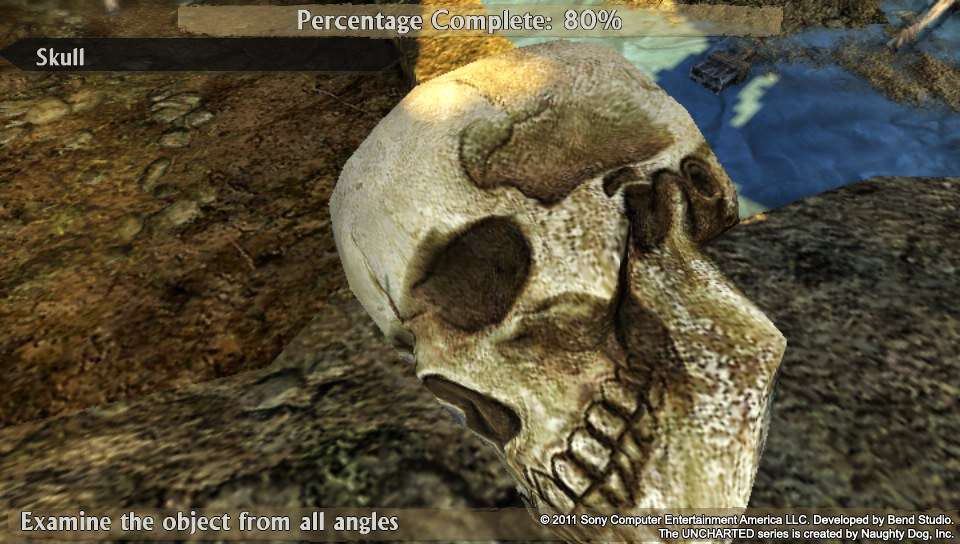 Uncharted: Golden Abyss has many treasures to find. Bounties, artifacts, etc. These can also be traded with friends or other players around you. This is done using the "Near" program which is installed to your Vita. When you launch Near, you can locate those playing the game, or played the game, and you can send trade offers or give gifts. You then claim these gifts or trade offers in the "Black Market" when you load up the game.

I am pleasantly surprised by how much fun I am having with the new features in Golden Abyss. The great graphics and so far, great game play. Are leaving me with the "I want more!" feeling. Whether Uncharted is on my PS3, or on my Vita. I just can not seem to get enough.


Updated 12/1/12
10 months after this review, the PS Vita has improved tremendously since it's launch. Sony has added PS+, PS1, Netflix, Facebook, Mail app, and other great features to the device.

I agree mostly with the review, other than the controls and touch control use. The novelty of the touch controls wears off rather quickly. Like you said, the range of motion for the analog sticks is rather tight and limited, lending some extremely twitchy controls. This is more a hardware issue rather than software, but it translates directly into the games.

Add me to the not enough motion in the analog sticks club. It's the very first thing I've noticed and I still haven't been able to get used to it. It's still pretty amazing to be able to play Uncharted on a handheld, though.
T

I agree mostly with the review, other than the controls and touch control use. The novelty of the touch controls wears off rather quickly. Like you said, the range of motion for the analog sticks is rather tight and limited
Click to expand...
Add me to the not enough motion in the analog sticks club. It's the very first thing I've noticed and I still haven't been able to get used to it.
Click to expand...
Am I reading this right? are the analog stick not responsive? That is a huge deal breaker for me if they are not.

I think the analogue sticks are fine, they just dont travel as much as they do on regular PS3 controllers so think that gets some getting used to.
When I've watched videos of people playing Wipeout they say the controls feel great when you steer with the left analogue.

They are very responsive. You just do not have the same distance that you would have with the controller.
K

Excellent work on this lethal

The range of motion is limited, so they are twitchy as hell. You can notice movement being translated to the screen before you realize you've moved the sticks.
I

Yeah, I imagine that with time used, one gets more accustomed to the movements.
K

Cheers for the review Lethal, was gonna get this day 1 anyway but now I'm extra sold ><

Good to know about the thumb sticks too, will keep that in mind
G

What happens to your PS3 when you remotely connect with Vita? Are you still able to do stuff at the same time on the PS3 or is it hijacked?

[QUOTE="Ghost-Rhayne, post: 5773422]What happens to your PS3 when you remotely connect with Vita? Are you still able to do stuff at the same time on the PS3 or is it hijacked?[/QUOTE]

Short answer is no. You can not access your PS3 normally if you are already using your PS Vita in remote play.
G

Short answer is no. You can not access your PS3 normally if you are already using your PS Vita in remote play.[/QUOTE]

I gathered as much. Such an amazing feature. Can't wait!

I just finished the game last night and I was very pleased with the game from start to finish. I completed the game on Normal so now I am going to play on hard and try to find the rest of the treasures and such that I missed. I bought the treasure map so I should be able to get em all on the next run.

Great review. I'm loving Uncharted so far but I haven't finished it yet because I'm also playing Wipeout.
T

Great review! Gamespot's review of Golden Abyss had me concerned, but seeing other reviews and gamers' reviews, it'll be my first PS Vita game.

Uncharted GA is a great game, it's a must for every ps vita owner
T

We still haven't played a game of Mercenaries on the 3DS.
S

will the fortune hunters club be used for golden abyss? so far ive been loving everything about the FHC DLC for U3, but sure would be nice to get some crap for golden abyss too! (like that treasure map should be free.. even though .99 not bad)

Uncharted is the reason i bought Vita for,or else i would have waited for some months at least.
M

[QUOTE="arfi-gorgona-O, post: 5778595]Uncharted is the reason i bought Vita for,or else i would have waited for some months at least.[/QUOTE] Yeah, Uncharted and Wipeout are my reasons.