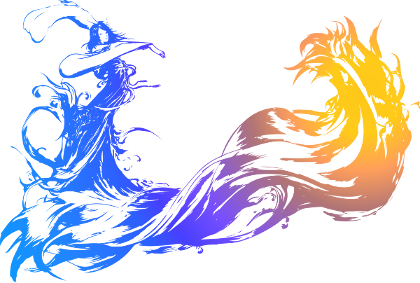 On a collapsed piece of highway, he and the structure are now, almost selectively, being pulled upward toward the beast's monstrous orifice. It's colossal presence stirs the futuristic city into debris, the golden haired athlete within its grasp, who just moments before was being cheered by a stadium of thousands. Now, the grip of an old mentor is all that keeps Tidus from floating into the abyss. Holding the hotshot by the scruff of his collar, suspended, flailing, and screaming, the grizzled man looks up to the void for assurance. Satisfied, he offers Tidus to its clutches. "This is it," he calmly says to him, "this is your story."

That Final Fantasy X is your story, Tidus's story, is a point the game does its best to emphasize. Ripped from stardom and his life as a famous "blitzball" player, Tidus's punk self is swallowed into the more primal world of Spira. Not only does no one know his name here, but many in fact question his sanity. Tidus's aforementioned city was apparently destroyed a thousand years ago, a past pinnacle of civilization that now serves as a lesson against the sins of technology and human ambition.

Confusion and homesickness surround this main character, witnessed in the well worded monologues he delivers in between key points of the story. He muses over his depressing predicament, but moreover, reveals that he still suffers from a selfish father's abandonment. Nonetheless, Tidus is stubborn, and remains an energetic and cocky athlete whose enthusiasm is evident in his battle dialogue as well as the skills you'll acquire from his personal Sphere Grid. 'Cheer' will raise party defense, while casting 'Hastega' on allies will increase their turn order frequency, granting easier micromanagement between the moves of the enemy.

After washing up on a beach Tidus meets an islander, Wakka, caribbean accent and all, the series's first implementation of voice acting a considerable success. Even upon its undeniably corny script, a dramatic earnesty combined with warm humor seem to outweigh it, and a friendship forms as the two make their way to a nearby village. Between gentle piano presses, electronic synth, and random battle encounters with wildlife, the little island begins to feel like a small piece of JRPG paradise. Like glass, the screen shatters to battle screens where your party will step up against a row of monsters. Turn after turn, Tidus will leap to a target for a meaty slice with his technicolor sword, and Wakka will hurl what's the equivalent of a volleyball, afflicting ailments like 'Blind' upon more lethal foes. The character movement and overall responsiveness is something to marvel at, as are the buttery menus that slide you points and items after each encounter.

Battles reward ability points to any character who gets a piece of the action, encouraging use of your entire roster, and further influenced by a novel swap system. Should you need to access certain talents or pull a wounded ally to safety, you can switch up the 3 man formation on any individual's turn. Different characters excelling against different enemies, regular swapping becomes a necessity. Slow but with powerful armor piercing, Auron's giant blade will land fatal blows on menacing bruisers, but if it's his turn to act and you're up against a pair of birds, Auron can tag out for Wakka, whose pinpoint accuracy can easily peg flyers out of the sky. Fundamentally, it's a simple matching game, but makes each personality feel relevant in your journey through Spira and rewards players who allow to each to shine.

You'll gain access to these comrades when Tidus finds himself in the midst of the world's struggle. He becomes a Guardian, part of an entourage in service of a summoner named Yuna, though the girl isn't exactly helpless. In dicey situations she can step in for heals, later learn spells that mitigate physical or spell damage, and even summon her magical beasts to take the field. Others in your troop include Rikku, a peppy rogue who incorporates an unapologetic use of forbidden technology. She can toss grenades for spreaded damage, steal valuable items, pick apart robotic enemies with ease, and later customize your party's equipment. Dancing these characters in and out of combat is demanded by thoughtful enemy designs, forcing clever combinations of their talents. Boss battles will often have your entire party see action, tossing helpful potions onto each other, or at least popping in to say hello with a brutal and cinematic finishing move.


Still, Yuna's quest is a solemn one. Impressive (if inconsistent) facial animations convey the humble girl's friendly and curious spirit, but one muffled by the responsibilities of her ever important title. As mentioned, the world of Spira has sinned, and the gargantuan monster that destroyed Tidus's city one thousand years ago still roams to this day, annihilating entire populations on its own clock. Fearful natives call the monster Sin itself. Yuna, then, must make a pilgrimage as others have before her, praying at local temples while you solve their crafty orb puzzles within. Once she obtains the powers from each, Sin can be defeated, earning the world 2 years of peace before the manifestation returns again. Perhaps someday, when mankind has fully repented, the cycle will stop. 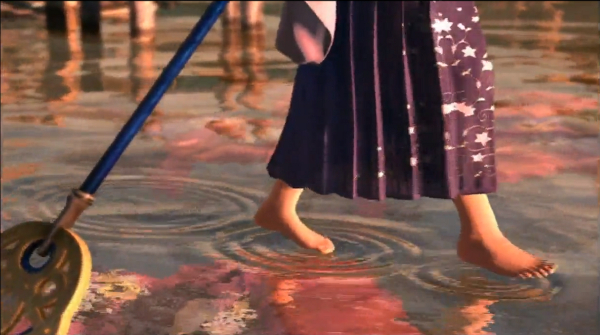 At least this is the logic Tidus learns of as you travel roads through flatlands, trailing into ethereal forests, and taking paths up snowy canyons. Few opportunities to explore freely, the journey is driven more by cutscenes and music, lined with branching paths not just to monsters and treasure chests, but NPCs and brief looks into how Spira operates. Repetitive dogmas, constant rebuilding, and priests and villagers who bow deeply before Yuna's brave service, the detail of the world's suffering state and its lean on religion is sincere. The tone is masterfully struck in one CGI cutscene when the crew makes a detour to a devastated village. Reeling in sadness from Sin's destruction, families watch as Yuna sends the unrestful souls of the dead to a more peaceful existence. She tip toes atop the dead bay, twirling her staff in ceremonial fashion and performs a Shinto like dance, weaving her body with the water as a Gregorian hymn sings to a spiritual drum. The scene is somber, even creepy, a wrongness difficult to shake.

It pervades Final Fantasy X. The same souls that Yuna lifts from lifeless bodies also appear in combat, slipping from fallen foes as each kill releases their waning screams. Such thematic connectivity resides in everything in Spira, as its hidden obsession with death is gradually unveiled. Villains that refuse death, that seek power in it, and who abuse the cycle will create startling questions for the player and his party. Questions that only Tidus -- due to his own naivety -- is willing to ask of people. People who follow the teachings and people who reject them, party members serve to be satellites to Spira's culture rather than individual points of focus themselves. Rifts between them and their beliefs begin to fade, as each discover they all truly want the same thing: happiness.

Yet it's a happiness feigned, the game's plastic optimism permeating through its characters, flashy combat, and time draining sidequests. Like that of monster hunting, or the in depth sport of Blitzball that can be accessed from any save point, it seems you can ignore the world and the compelling fate of its people just as they do. But eventually it must be faced. As friendships grow, the very skill grids of characters will intermingle, strengthening your party and readying them for a decisive battle against a world rigged with demonic motives.

This sequence sets forth a wicked boss theme scrambled by chaotic, electric guitar and whaling chords, but underneath it, a steady crash of cymbals can be heard guiding you from its chaos. It builds tempo, crashing faster and faster until it drops a climax at the very point your party runs onto the battle screen, Yuna clutching her staff to her chest, Tidus rocking a sword confidently in his hand, and Rikku running onto the field practically jamming her feet to the hard soundtrack. She throws up the first 'Hastega,' and as the spell effects wash over the party, so does an uplifting sense of challenge and adrenaline. Your party's first spell has rigged the turn order in their favor, and now they stand prepared for your next input, ready to turn the tables on Death itself.

My heart is warmed by the fact that FFX is the series entry that earned your 10.

Great review, upmagic. I like to take the cycle of death themes even a bit further to suggest a light-handed commentary on JRPGs and the nature of playing video games in general, but I like that you connected it to battles and the party, specifically.

Excellent review of one of my fondest games. Bravo!

This shouldn't be read by someone who hasn't played the game, since you spent too much time on the story.

But this was an interesting read nonetheless. I agree with your score!
S

Damn, so well put upmagic. I'll update the database when I get home.

Yay... nostalgia bomb. I miss this game.
U

[QUOTE="KyleOnTheRun, post: 6240694]My heart is warmed by the fact that FFX is the series entry that earned your 10.

Great review, upmagic. I like to take the cycle of death themes even a bit further to suggest a light-handed commentary on JRPGs and the nature of playing video games in general, but I like that you connected it to battles and the party, specifically.[/QUOTE]

That might be a neat topic I can look at in the future. Thanks for keeping up my FF coverage, glad you found this one agreeable.

I have only XII, I, II, and III left. Those NES games will be a nightmare =[
K

Warms my heart to read this. Thank you.