Please note this review only covers the core game and not The After Years or Interlude which can be found in the PSP collection.

The whole Dark Knight business isn't really working out for Cecil. A bit of a shame, too, since quickly won battles are often the best feeling Final Fantasy IV has to offer, and Cecil's Dark Knight abilities make such easy work of large groups of goblins. But not everyone picks the right career as their first choice. After all, what kind of name is that for a soldier of darkness, anyway? Cecil.

As he laments the idea of becoming a powerful but remorseless warrior, Cecil further ponders his personal identity when orders from his king suddenly become morally bankrupt. Yet, by the time he realizes his kingdom is corrupted by an evil force led by the villain, Golbez, Cecil and his brother in arms, Kain, have already supplied two of the world's Crystals to the enemy's cause. Having been used to commit heinous crimes, Cecil decides to abandon his duty and follow his heart, hence forth fighting on the side of humanity. Final Fantasy IV's speed makes it feel less turn based and more intense, if merciless.​
In his quest to hang up his blackened armor for the path of a Paladin, Cecil sets foot upon Final Fantasy IV's world map to seek out and alert other kingdoms that their Crystals are in jeopardy of being stolen, and their peoples destroyed. What Golbez plans to do when all the Crystals are in his possession is a mystery that no one wants to see solved, but always two steps ahead of the player, it seems that he will inevitably achieve his goal. And where each step you take after him is likely a random battle encounter, you're in for a game of both rewarding and frustrating levels of attrition.

Really, it's almost impressive how many battles you'll run into in just walking to a treasure chest not more than a screen's distance away. The game's caverns and towers are actually quite small in scope, just a few floors deep, but the sheer density of enemies prevent too quick of progress. Entering a dungeon then means being smacked around quite a bit, where after each battle you'll revisit the menu screen to sprinkle your party with healing magic before pressing on. How far can you inch forward before you can no longer sustain your party's health totals? That is the question.

One that makes Final Fantasy IV a sort of save point drama, and an intense one in regards to the final dungeons that are littered with legendary weapons to collect and mini bosses to dispatch. You rack up levels, cash, and occasionally find secret pathways to powerful loot, all the while creatures weaken your party. Distinctive artwork, whether you choose the original SNES version or the glossy remaster on the PSP, give a powerful presence to the threats your party faces, instantly telegraphing whether to fight or to run scared, leaving coins from your purse behind. Two menacing black knights and a half serpent, half human sorceress? Please, just take the money. 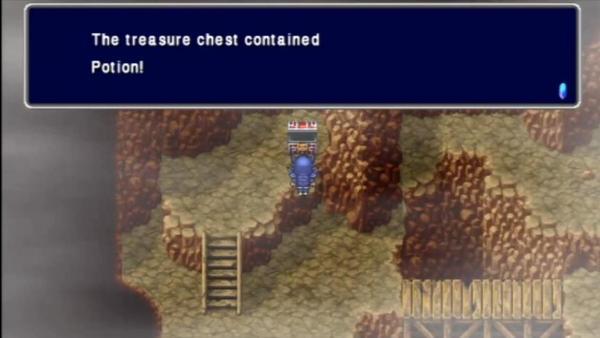 Dammit.
​
This means there will be times you'll have to double back and come up for air at the world map before taking a deep breath and trying to dive deeper than before. That is, until coming across the save point that lies half way in and reveling in its provided convenience. Save points let you use any Tents you've stocked up on, items that replenish your party's HP and MP totals, taking a lot of stress off your shoulders and allowing you to answer Final Fantasy IV's other teasing questions. Will that treasure chest be worth going out of your way for? Rarely. Is all of this abuse worth the disappointment of Golbez beating you to the punch, again and again? Not really. In fact the one time where you do win the race, reach the next Crystal, and defeat Golbez in a clean fight, he takes it anyway.

But the silly drama plays to its advantages, sending you all over the globe, beneath its surface and atop its mountains, a smoothly told tale granting early access to airships, hovercraft, and other forms of speedy travel. The pace of it all shuffles your battle party at every opportunity, and this character variety will revitalize spirits before trudging through another quagmire of constant battle transitioning. Cecil will first be accompanied by two spunky mage children, then a sappy bard that confuses enemies with his harp, and an airship mechanic that the story will later exchange for a disciplined martial artist.

Their move sets are varied but little of their talent is actually compatible with the unforgiving difficulty. The white mage, Rosa, has entire pages worth of support magic, but you'll only need to touch a handful of spells -- the healing ones. Half of the battles you trip over are "back attacks" or ambushes that give free volleys to your opponents, further requiring you to focus on nothing but rigorous upkeep. Bosses challenge how fast you can select heavy healing magic off the menus, where even attempting to revive a fallen ally may not be worth the time it lends to an actively turn taking enemy. 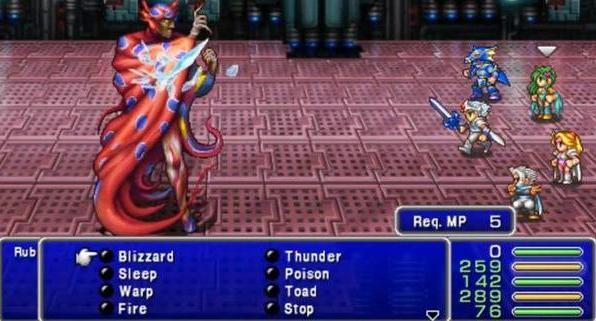 Dish out your simplest and most damaging moves to save valuable time​
In this manner, enemies force otherwise interesting characters to be seen merely as healing batteries or damage sponges. They become forgettable, not benefitting from their lighting fast introductions or attempts at dramatic sincerity, either. Meeting someone new is routinely followed by the heroic death of a previous comrade you were just getting comfortable with. This incessant depiction of noble sacrifice soon becomes unintentionally hilarious; watching sprites you barely got much use out of jump onto explosions and off ledges, crying to the success of Cecil's mission in a wholehearted failure to evoke something through their vain and sudden decisions.

The algorithmic emotion ends up falling in line with the numbers game that Final Fantasy IV truly comes off as. A hypnotic dungeon crawl where melodic themes nest in your mind as you work up a party worthy of presenting to the next boss. A well mapped adventure filled with grueling struggle, it proves as addicting as it is unmemorable. Where becoming a righteous Paladin is more meaningful for its addition to your banks of healing magic, than it is as a turning point of the experience.

I loved the irony sprinkled throughout this review - a refreshing, brutally honest examination of a game that probably gets too much nostalgic cred.
U

Thanks for reading! To the game's credit, it holds its own ground awfully well for 20 years. Easy to see why it was such a huge step forward in Square learning process. Hope to get to V for the first time next.
K

[QUOTE="upmagic, post: 6002100]Thanks for reading! To the game's credit, it holds its own ground awfully well for 20 years. Easy to see why it was such a huge step forward in Square learning process. Hope to get to V for the first time next.[/QUOTE]

I'm actually one of the editors for PSU. I think this piece works great as a retrospective on FF4. Would you be interested in seeing this article on the PSU.com front page? If so, PM me.
D

Wow this review was again, awesome. Short sweet and to the point.