An all new Quake and not just a bug fixed rehash of a 17 year old game.

Add Bethesda.net launcher as a non steam game then in the "Set launch options" add the following

Then maybe change the name to Quake Champions

This was revealed a couple months ago, but hey I have not been here for ages and there is no thread about it.

You can buy the early access champion pack for £19.99 (no idea in American)

"The first ports to be completed were the Linux and SPARC Solaris ports by id Software employee Dave D. Taylor in 1996.[10] The first commercially released port was the 1997 port to Mac OS, done by MacSoft. Finally in 1999, a retail version of the Linux port was distributed by Macmillan Digital Publishing USA in a bundle with the three add-ons as Quake: The Offering.[11][12][13]

Quake was also ported to home console systems. On October 31, 1997, the game was ported to the Sega Saturn by Lobotomy Software. The Sega Saturn port used Lobotomy Software's own 3D game engine, SlaveDriver (the same game engine that powered the Sega Saturn versions of PowerSlave and Duke Nukem 3D), instead of the original Quake engine. It is the only version of Quake that is rated "T" for Teen instead of "M" for Mature. Quake had also been ported to the Sony PlayStation by Lobotomy Software, but the port was cancelled due to the lack of being able to find a publisher. On March 24, 1998, the game was ported to the Nintendo 64 by Midway Games. Both console ports required compromises because of the limited CPU power and ROM storage space for levels. The Sega Saturn version includes 28 of the 32 single-player levels from the original PC version of the game, though the secret levels, Ziggurat Vertigo (E1M8), The Underearth (E2M7), The Haunted Halls (E3M7), and The Nameless City (E4M8), were removed. Instead, it has four exclusive secret levels: Purgatorium, Hell's Aerie, The Coliseum, and Watery Grave. It also contains an exclusive unlockable, "Dank & Scuz", which is a story set in the Quake milieu and presented in the form of a slide show with voice acting. There are no multiplayer modes in the Sega Saturn version; as a result of this, all of the deathmatch maps from the PC version were removed from the Sega Saturn port. The Nintendo 64 version includes 25 single-player levels from the PC version, though it is missing The Grisly Grotto (E1M4), The Installation (E2M1), The Ebon Fortress (E2M4), The Wind Tunnels (E3M5), The Sewage System (E4M1), and Hell's Atrium (E4M5) levels. It also does not use the hub "START" map where the player chooses a difficulty level and an episode; the difficulty level is chosen from a menu when starting the game, and all of the levels are played in sequential order from The Slipgate Complex (E1M1) to Shub Niggurath's Pit (END). The Nintendo 64 version, while lacking the cooperative multiplayer mode, includes two player deathmatch. All six of the deathmatch maps from the PC version are in the Nintendo 64 port, and an exclusive deathmatch level, The Court of Death, is also included."

The new game looks pretty good! Odd that Doom, Quake, Duke Nukem 3D and Wolfenstein are all back. I feel like the 90s are making a big comeback lately.
Last edited: Oct 21, 2016

Yeah, I should have made a thread about this when it was announced. lol

I haven't had a powerful PC since the Quake III days, but this game might make me invest in a PC if it turns out well.
K

Yes Chewey I know Quake is 20 years old (Doom is even older i was 13) but the current latest released Quake game (Live) is based off Quake 3.

Its a welcome return, all the big AAA FPS games in the last decade focus too much on realism, unlocks and are slow as feck with zero skills for movement.
Last edited: Oct 22, 2016

Oh .. my gosh. How the heck did I not know about this? This used to be my favorite game ever for online matches. This hit me right in the nostalgia feels. I used to dominate at this game until the servers were overrun by idiot hackers that just made themselves invincible (gee, how fun and challenging). Super excited for this. Just subscribed for updates on their site.
K

I've always loved Quake ... especially the multiplayer aspect. Was supposed to sign up for the beta but I keep forgetting. >_>

If I'm not mistaken, keefy is also a fan of Quake. I wonder if he signed up for the beta.

Played Quake III Arena all the time back in the day. Was extremely good at it, but some of the servers had issues with rampant hacking, like idiots making themselves invincible. How anyone can find joy in that is beyond me. Like great, you have no skill to play the real game so you cheat. Grats.
K

Vyse said:
If I'm not mistaken, keefy is also a fan of Quake. I wonder if he signed up for the beta.
Click to expand...
I signed up a couple weeks ago.
Played Quake Live since 2008 and before that Quake 4 was my first Quake game which I quite liked even though the hardocre did not, crouch slide FTW!! Althouygh I must admit the last patch (1.42 I think) did ruined Quake 4 totally, it messed up the movement on many maps.
Last edited: Jan 22, 2018
K

Try not to incriminate yourself... but yeah we want leaks
K 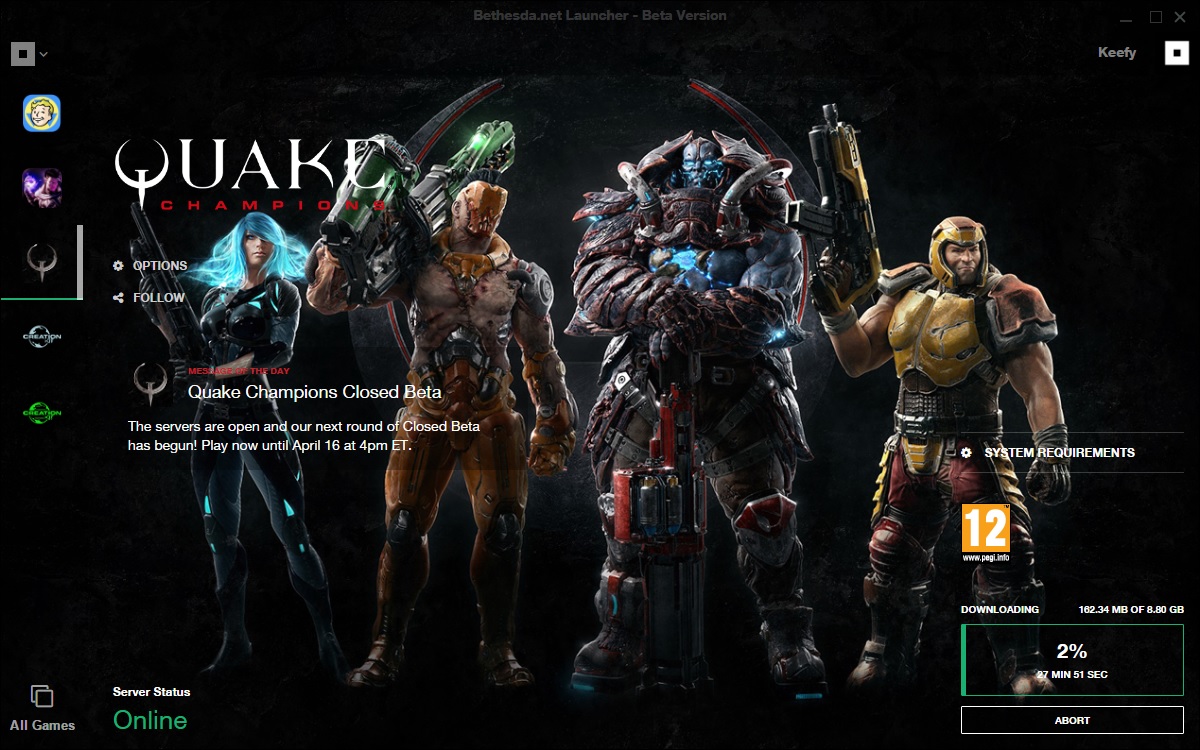 This is about all I can share without editing the screens first, they have my username at the bottom of the screen.
Game is super fun, I came bottom in my team and my team lost but I had a total blast playing it.

When I read "Cake Champions", I immediately thought it was a new Dunkey video, haha.
K

yeah it was changed to make it so bethesda cant find it so easy.
Also the vid was edited to hide the players username in the lowr part of the screen and in the kill feed int he top left hence the offset video.
Last edited: Apr 15, 2017

[video=youtube;vETsBLDHdCE]https://www.youtube.com/watch?v=vETsBLDHdCE&feature=youtu.be[/video][/QUOTE]
Looks good it'll be on my wish list
K

Well the Beta has ended now. Will be back onthe 20th April.
Another vid somebody recorded.

Well the beta is underway again.

P.S
If you have a Gmail account you can get sent emails with or without the period in your name, but many online services class the removal of the period as 2 seperate emails from 2 different users so basically you can sign up twice with 1 email.
e.g
[email protected]
[email protected]


I am still in Beta with original key and all my progress has been saved.
Last edited: Apr 22, 2017

I finally got the beta e-mail. Will be trying it later today.
K

Another vid of somone playing

Beta stars again tomorrow so check your emails for invites you may have one.

Been liking the game so far. The feel of the game is still very much like Quake III Arena I played ages ago. Only took me a few matches before I was back in the top 3 spots again for kills. It's a very simple FPS, but there definitely can be some improvements. Some of the appearance upgrades are a huge joke.
K

Feels a bit more floaty than Quake Live, might just be due to different Champions having different movment charteristics.
Dont like the Rail having a damge boost when zoomed, hope its been changed or does eventually. 80 unzoomed 100 zoomed.

The rail gun in Quake III Arena was always a one hit kill, regardless of zoom. It's basically their version of a sniper rifle. Never played Quake Live. I've always hated the rail gun, lol.
Last edited: Apr 27, 2017
K

Quake Live reduced the Rail down to 75 or 80 because thesedays players can aim really well. IF you want 1 hit kills you play Instagib

I first played Quake 3 about 10 years ago when I bouGht the id super pack off Steam, but the maps and mods took forever to download due to the servers not supporting fast downloads, it put me off the game.