If you've ever been away from your hometown for a while, you know just how complicated a return trip can be. You have to make your way there, deal with family and friends who frequently ask you why you left and wonder what's going on with you, and sometimes deal with problems that you simply didn't expect. It's even worse when you have an emergency on your hands, particularly because you may be expected to do more than you feel comfortable or capable of. So you can only imagine the problems that Alex Shepherd, the protagonist of Silent Hill: Homecoming, faces in the upcoming game from The Collective and Konami when he is plunged into a maelstrom of supernatural activity. I managed to get our hands on a PlayStation 3 build of the game and explore the first few areas along with Alex to see what secrets await him.

The tale of Silent Hill: Homecoming initially starts with a nightmarish scenario for any family even before the first monster is introduced. Alex , a soldier recently discharged from a military hospital, makes his way back to his hometown of Shepherd's Glen to investigate the disappearance of his little brother, Joshua, who has seemingly vanished without a trace. Unfortunately for Alex, he quickly discovers that his little brother's absence is only part of a much more malevolent situation: the numbers of missing persons, including his father, in his town are increasing daily, and disturbing creatures roam the vacant and devastated streets with impunity. To get down to the bottom of what's going on, Alex will embark on a journey that will take him from the yards of Shepherd's Glen to the streets of Silent Hill as he fights for his very life and the lives of those he cares for.


One thing that makes Alex stand out significantly from the protagonists from other Silent Hill titles is his talent for combat. In previous articles that we've written, I've mentioned Alex's abilities such as the solid aim he has with a firearm, which will allow players to aim precisely at targets and pull off headshots or other damaging shots. However, actually having a build of the game that wasn't limited to a demo section provided me with the ability to fully explore the hand to hand combat system, which is surprisingly deep considering the weapons that you'll gain access to. While you won't pick up nearly the number of items that were scattered about in Silent Hill: 0rigins, you will gain access to some damaging weaponry, such as combat knives, steel pipes and fire axes, all with their own rates of speed and damage inflicted when swung. By holding the L2 button, you prepare to swing; and by tapping either X for a fast attack or Square for a strong attack, you get different strikes, allowing you to string together button presses for combos. Holding the Square button builds up Alex's power, so you can land even harder blows, and if you time it just right and have inflicted enough damage, you will be able to land a finishing blow.

However, you can't simply button mash your way through hand to hand combat with the various creatures that you'll fight off in the town for a number of reasons. For one thing, you'll miss a number of your strikes, leaving you open to being attacked. For another, some monsters are extremely fast, getting through frantic swings and landing multiple blows on you before you have a chance to react or even performing diving leaps that will knock Alex to the ground. The last, and perhaps most dangerous reason, is that the creatures will block and dodge your strikes, leaving you open to a counter attack. As a result, you'll need to time when an incoming attack is triggered and hit the circle button to dodge right before they strike to successfully avoid their blow, giving you a chance to freely hit them. 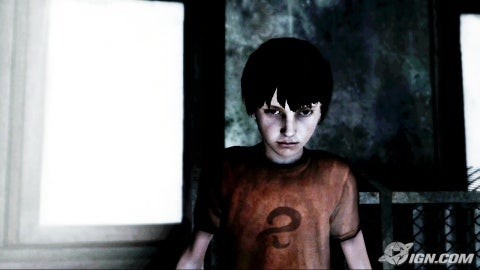 In fact, this is frequently the only way that you're able to take out some of the extremely strange denizens that now populate the fog enshrouded streets of the town. So far, I've seen six separate kinds of twisted creatures that I've pummeled, stabbed or shot, each one with its own strange quirks. This ranges from swarms of giant bugs and skinned dog-like beings to strange spider-like monsters that had giant blades at the ends of each limb. Of course, the game also included the freakish faceless nurses that shambled towards me wielding scalpels. However, one cool thing included in Homecoming is that damage inflicted on enemies is reflected on their character models. So if you slash a creature, the wound remains on it even after it dies. Battering a creature will open cuts or start to display other trauma, which is very impressive.
Homecoming isn't all about combat, though – there are plenty of puzzles that you'll need to solve as you traverse the corridors of the game. Some of these range from basic tasks, such as finding access codes for keypads to somewhat trickier brainteasers, such as rewiring electrical fuses to turn power on. Like most Silent Hill games, you'll frequently have to move from one area to another to find the items you'll need to solve these brainteasers. Fortunately, players will be able to store information related to certain tasks within Alex's journal, which is split into four separate sections. The first section is clues, which will hold any hints you've come across from written documents. The second is called Manual, which will update with any control commands you receive. The third and fourth are somewhat similar to each other: Photos and Drawings will hold any pictures or art that you come across as you explore.

This can be particularly useful as you move through many of the environments in the game, particularly as you're trying to discover what's going on in each area. Unlike 0rigins, Alex doesn't appear to have any control over his transitions between the real world and the surreal, other world. Instead, Alex seemed to be incapacitated, passing out as the familiar siren sound effect blared out to signal the environmental switch and awakening in the alternate location. However, instead of performing a simple fade and switching the action to the off-kilter environment, Homecoming took a page from the recently released film. This meant that I could see when the switch was made, watching as the floor and walls would be peeled away to reveal the rust and metallic space underneath. 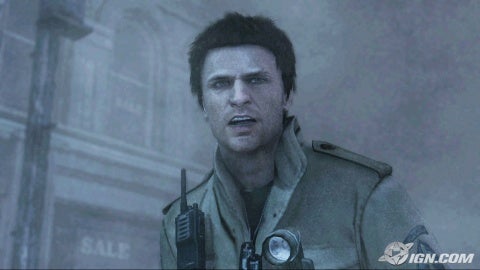 What the hell is that?

Environments also were a lot more interactive than I'd expected. Previously, I noticed that you could run into items like trashcans or IV stands and watch them get knocked over. However, I noticed a section where I had to break a pane of glass, and watched as the monsters in the other room were alerted to the action and quickly moved to investigate where the sound came from before they noticed me and attacked. Other areas were blocked off by paintings (or, in the alternate world, skin-like walls). By using his combat knife and hitting the X button quickly, Alex could slice his way through the obstruction, allowing his to squeeze through the revealed passage and move to the next area.

In fact, one of the things that stood out were the way that the game implemented quick-time button events. Unlike action games where players frequently would have to pound buttons to perform killing moves, these events would only pop up during specific moments when Alex had to fight off some potentially deadly attack. For example, with the dog-like creatures, I had to pound on a button as fast as possible whenever it would leap on top of me. If I didn't do it in time, the "dog" would rip my throat out, forcing me to continue from a recent checkpoint or save. Homecoming intelligently uses these sequences during specific plot moments. For example, during one moment when I had to reach into a hole in the wall in the other world, I was grabbed by "something." If I hit the button fast enough, I recovered an item that I needed, but if I didn't – well, let's just say it wasn't a pretty result for Alex. 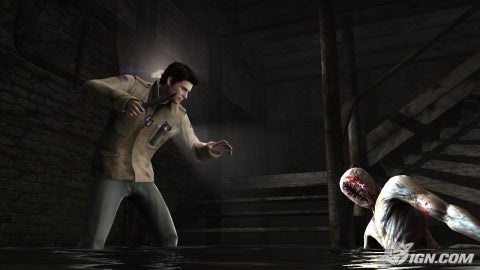 Finally, I also managed to take a little time to explore a feature that I only recently discovered within the E3 demo: the dialogue trees that are included in the game. At specific plot moments, Alex is presented with two or three dialogue choices that he can use in conversation with different characters – some are mean, some are indifferent and some are friendly. Each one evokes a completely different response from the listener, and while I reloaded a few times to see how each path would turn out, it appeared to always lead towards the same general direction. My guess is that specific conversation strings will contribute to the specific ending that you receive (on top of other factors), but I could be wrong.

Apart from this, I was pretty impressed by some of the visuals. I say some because while the volumetric fog effects and alternate world transitions are sweet, character models are large and detailed, and some of the visual textures are incredible (like blood splashing on the screen when you cut through walls), others seemed a bit problematic with the early build. For example, some slowdown would crop up at random moments, such as with Alex simply running through the fog without any monsters on screen. The same could be said about some of the camera angles, which could be a bit tricky, especially if you found yourself fighting near a wall. However, I expect these, and some other problems to be fixed when the title is released in late September.
Click to expand...
You must log in or register to reply here.
Share: Facebook Twitter Google+ Reddit Pinterest Tumblr WhatsApp Email Link
Reply