Square-enix on E3 ( full list of what they will show ).

LOS ANGELES (March 29, 2009) — Square Enix, Inc., the publisher of Square Enix® interactive entertainment products in North America, announced today a broad lineup of titles for the 2009 E3 Expo, taking place between June 2 – 4. Highlighting the steps it has taken to become a more global entertainment company, Square Enix will not only feature games developed in partnership with U.S. and European developers such as FRONT MISSION EVOLVED™, ORDER OF WAR™ and SUPREME COMMANDER® 2 at their booth; but continues to offer the highest-quality experiences across all platforms, with highly anticipated new games such as DISSIDIA™ FINAL FANTASY® and FINAL FANTASY XIII, in addition to the next installment in the beloved KINGDOM HEARTS franchise, KINGDOM HEARTS 358/2 Days.
“As our best-selling FINAL FANTASY franchise continues to evolve, Square Enix is focused on creating the best entertainment experiences for all gamers,” said John Yamamoto, president and chief executive officer of Square Enix, Inc. and Square Enix Ltd., “Our new partnerships with companies such as Double Helix, Gas Powered Games and Wargaming.net are a testament to our commitment to offer a much broader variety of games across different genres. All while Square Enix remains unchanged in the quality and depth of story we bring to all of the games we publish. We look forward to showcasing the results of these partnerships at E3 2009 as well as several much awaited FINAL FANTASY titles and KINGDOM HEARTS 358/2 Days.”

DISSIDIA FINAL FANTASY
Developer: Square Enix Co., Ltd.
Publisher: Square Enix, Inc.
Platform: PSP® (PlayStation®Portable) system
Genre: Action-RPG
ESRB: T (Teen)
Street Date: August 25, 2009*
DISSIDIA FINAL FANTASY does what no other FINAL FANTASY title has done before, bringing together an all-star cast to give players a chance to see their favorite FINAL FANTASY characters engage in high-intensity battles. Experience this renowned franchise, which has shipped over 85 million units worldwide, in a brand new light with this dramatic 3-D action game. Soar through expansive environments and participate in gripping combat, all while enjoying RPG-based character development that adds a rich layer of depth to the story behind the clashing forces. The battle between good and evil begins – What will you fight for?
The official website can be found at http://na.square-enix.com/dissidia/.
*Limited-edition DISSIDIA FINAL FANTASY PSP system Entertainment Pack to launch at Gamestop day and date with stand-alone game.

FINAL FANTASY XIII
Developer: Square Enix Co., Ltd.
Publisher: Square Enix, Inc.
Platform: PLAYSTATION®3 computer entertainment system/
Xbox 360® video game and entertainment system from Microsoft
Genre: RPG
ESRB: Not Yet Rated
Ship Date: 2010
Square Enix proudly presents FINAL FANTASY XIII, the latest installment in the world-renowned FINAL FANTASY series. To celebrate the 13th numbered release in the series, Square Enix has undertaken a colossal project involving the development of various content for multiple platforms. FABULA NOVA CRYSTALLIS®, defined in Latin as “the new tale of the crystal,” is made up of several different titles based on variations of the FINAL FANTASY XIII universe. While each title in the project features different characters, different worlds and different stories, all are ultimately based on and expand upon a common mythos.
In FINAL FANTASY XIII, players will embark on a journey through the cityworld of Cocoon and the outerworld of Pulse, encountering and fighting alongside a diverse group of allies. Execute powerful attacks with weapons and magic, and summon the enigmatic Eidolons with an evolved Active Time Battle™ system. Experience seamless transitions between real-time gameplay and in-game cinematics. Do you have the courage to face your destiny?
The official website can be found at http://www.finalfantasyxiii.com.

NIER™
Developer: cavia, Inc.
Publisher: Square Enix, Inc.
Platforms: PLAYSTATION 3/ Xbox 360
Genre: Action-Adventure
ESRB: Not Yet Rated
Ship Date: 2010
Nothing is as it seems in Square Enix’s latest action adventure game, set in a crumbling world plagued by disease and dark, unrecognizable creatures. Players assume the role of the unyielding protagonist, NIER, resolute in his quest to discover a cure for his daughter, who is infected with the Black Scrawl virus. With powerful allies and a mysterious book, NIER encounters things that will confound even the mightiest of warriors.
Official website coming soon.

ORDER OF WAR
Developer: Wargaming.net™
Publisher: Square Enix, Inc.
Platform: Windows PC
Genre: Real-Time Strategy
ESRB: Not Yet Rated
Ship Date: Fall 2009
Square Enix teams up with strategy game specialist Wargaming.net to present ORDER OF WAR, a brand-new IP set for a simultaneous release across multiple territories. Developed exclusively for Windows PC, the game features massive-scale battles brought to life with a cinematic intensity never seen before in a WWII strategy game. Players will take command of an entire army including ground troops, artillery, tank divisions and aircraft in all-out strategic assaults. The single-player mode can be played out in two campaigns – American versus German forces on the western front and German versus Russian on the eastern front. Missions will be based on key historic events and operations from 1944.
The official website can be found at http://www.orderofwar.com/.

SUPREME COMMANDER 2
Developer: Gas Powered Games®
Publisher: Square Enix, Inc.
Platforms: Xbox 360/Windows PC
Genre: Real-Time Strategy
ESRB: Not Yet Rated
Ship date: 2010
Experience brutal battles on a massive scale! In SUPREME COMMANDER 2, players will wage war by creating enormous customizable armies and experimental war machines that can change the balance of power at any given moment. Take the role of one of the three enigmatic commanders, each representing a unique faction with a rich story that brings a new level of emotional connection to the RTS genre, or fight the battle online. Where do your loyalties lie?
Official website coming soon.

Downloadable Titles:
FINAL FANTASY IV: THE AFTER YEARS™
Developer: Square Enix Co., Ltd.
Publisher: Square Enix, Inc.
Platform: Wii
Genre: RPG
ESRB: E (Everyone)
Launch Date: June 1, 2009
A true sequel to the classic Super NES™ title, FINAL FANTASY IV: THE AFTER YEARS is an episodic game coming exclusively to Nintendo’s WiiWare™ service June 1, 2009. With both single and multiplayer modes, Wii users will now be able to explore the world of FINAL FANTASY IV with up to three of their friends and coordinate commands into a single attack. Unravel a mystery told through the intertwining stories of a familiar cast of characters, and complete the FINAL FANTASY IV experience with this latest installment in the franchise.
The official website can be found at http://www.ff4theafteryears.com/.


Very Nice list, Can't wait to see what they will show for footage.
D

Heres a new pic, i've heard it's from the Jump Festa event, not sure when that was. 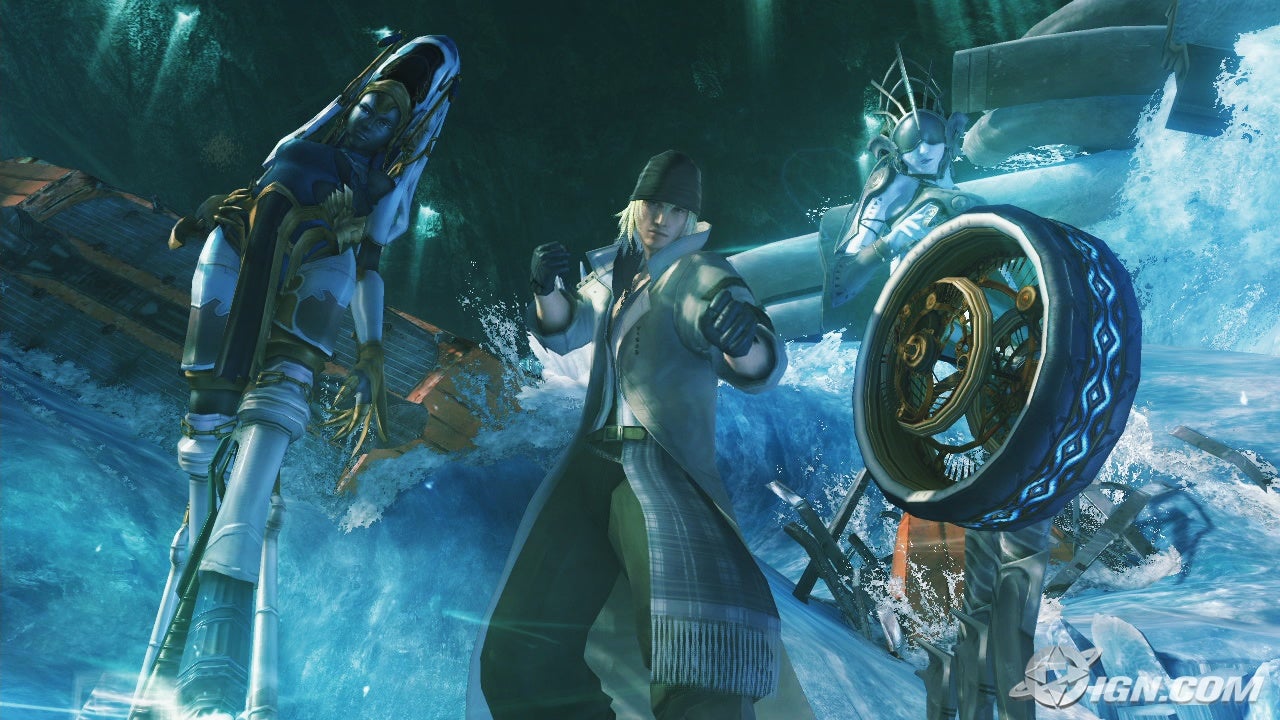 Snow and Shiva sisters, really looking forward to see how they are used in battle.

Thanks for the picture, looks great. I still find it weird that Shiva turns into a bike.
Z

terrible lineup imo
SE new direction is pretty much directly opposite to my interests. Really disappointed with what they did to Front Mission
I

I have to say that line up just doesn't interest me at all. Nier might be fairly interesting, but Front Mission as a 3rd person shooter? I'm skeptical about that.
K

No Rapture= Fail
A

Well if the whole Rapture exclusive thing is true i don't think they would announce it on the list but at a conference. Still not sure about the whole thing.

There should/would be 5 games to look forward to but i guess they are saving them for TGS.

I'm not sure why people are complaining, this year is all about marketing FFXIII not Versus. The don't want them to compete against each other and they will have an extra year to show Versus of anyway.

Oh well, 2 games to look forward to from one company is a good showing at E3 for me. Maybe 3 if they show us some Rapture footage.
S

The only game I'm interested in is Supreme Commander 2, but I'm getting it for PC though. However, I wish that game came out for the PS3 though.
T

@ Aizen: Um Dissidia and FFXIII is on that list.

Anyway it's nice list whith 4 that i know i want, with the i have to wait and see more.
C

Site, trailer and screenshots of nier

Anyway it's nice list whith 4 that i know i want, with the i have to wait and see more.[/quote]

Yeh they're the two i am looking forward to, just saying they will save alot of it for TGS.
S

Looks like only FF13 and KH are the interesting titles for hardware i own.
B

Nier looks pretty horrible, i hate the art style
and Fron Mission shooterz i ain't interested in either
but support is good i guess (even though neither of those are develope by SE)

Rapture is rumored to be at E3, and obviously that wouldn't be on the press release, so im hopeful
P

no Birth by Sleep? lol.

[QUOTE="Byoushinn, post: 0]those will be at TGS because they've not had an official western launch like xiii and dissidia[/quote]

And where's Rapture?
A

Look at the size of it compared to the Mass Effect 2 posters :O
M

Cant wait for FFXIII to be shown at E3. Its going to be awesome.
L

Coments on the lineup:

- Dissidia: It was a while since it was released in japan, SE is slow localizing, well, looking forward to this tittle

- FFXIII: A new trailer would be well recieved

- FFvXIII: I wonder why one of their flagships is not there

- Front Mission: Never followed the series, but happy that it's not xbox exclusive. I don't quitte understand why SE gave one of their most famous series to a western developer and why the game became a shotter (wait, because sRPGs don't appeal the west? Valkyria Chronicles says hi!).

- Neir: I have yet to see the trailer, for now, what I dislike the most is that the main character is your typical macho hero. But I'm happy to finally see the game Cavia was making for the Ps3 (after 3 years of waiting), I'm dissappointed that is not exclusive though.

Usely Square-enix also has a closed door theater. I wouldn't be suprised if KH: BbS and vXIII will make a appearance there. If not I won't me missing them this time.. since they have a decent line-up. I can't wait to see what they will show for XIII this time. I hope alot of gameplay video's.
H

No FFXIV?? Am i the only one looking forward to that title? I guess...

I wanna play that game, but it's so far away from reality now...
A

- Dissidia: It was a while since it was released in japan, SE is slow localizing, well, looking forward to this tittle
[/quote]
It's not just because of localizing, though. They are making tons of changes to the game, perhaps adding some content etc. So they are improving the game for the western audience, not just translating everything to English.
A

When did Reggie say the DS KH game is released? Hopefully, that means BbS isnt too far off either!
K

I'm disappointed as well. Oh well. Maybe they really have swept it under the rug.
A

Dissidia looks pretty sweet, I like the whole concept of bringing back all the main characters from the games. If only they would make an RPG out of the same concept.