You get a +1 internets if you can figure out the song they are remixing without using the spoiler tag below
[video=youtube;QrSH2wKh6ys]https://www.youtube.com/watch?v=QrSH2wKh6ys[/video]

Chrono Trigger: Frog's Theme
Absolutely 0 craps given if it's a multiplat. Holy Gods above a proper sequel has been LONG needed. It's like Square-Enix likes us again or something.

I have no faith in Square Enix what so ever.

I really hope they do the Hitman game right. The last one was very disappointing, but they've said they are going back to the roots. 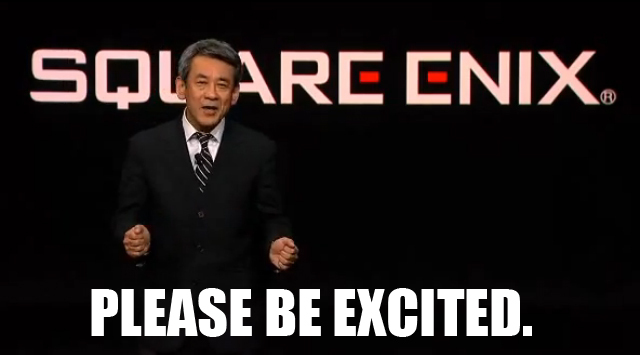 I cant even muster up a decent response.

Their Eidos based stuff will be solid as usual however.

Another troll or mobile games.


Sent from my iPhone using Tapatalk[/QUOTE]

Doh! I forgot about dragons quest.


Sent from my iPhone using Tapatalk[/QUOTE]

Can honestly say I probably won't be getting excited by ANY of those :lol:

Hey man! Deus Ex and Just Cause are great.

My only issues with JC3 is it
Looks so much like JC2.

But deus is the bomb.
Me want.

I'd watch that video again just for the sick tune.
Likes: Lefein

[/QUOTE]
Was going to post this but you beat me to it.


Well the artist who's working on Star Ocean 5 said he was preparing something for E3 so one of the 6 things may be a localisation of Star Ocean 5.

You guys are in for a big surprise

Square Enix is proud to announce that they're still sitting on the Chrono Trademark. (Shooting down restoration projects in the process).

[QUOTE="Two4DaMoney, post: 6452322]Final Fantasy 7 ps4 port announcement was a 1000 kicks to every single person that wanted ff7 remade lmao.[/QUOTE]
That was incredibly irritating. They're so fucking clueless. That game would sell like crack if they did a proper remake.

[QUOTE="Brandon, post: 6452323]That was incredibly irritating. They're so fucking clueless. That game would sell like crack if they did a proper remake.[/QUOTE]I don't understand understand them either. I think I'll go thread digging just to see the reaction to the announcement. I think the gif below sums up pretty much everyone reaction.


Sent from my iPhone using Tapatalk[/QUOTE]
You mean you ignored it. Dragon Quest Heroes was mentioned in the video.

Bashing Square Enix is also a strange way to expect them to announce a game for you. Stop ruining it for those who still want to play their games.

[QUOTE="Metal King Slime, post: 6452325]You mean you ignored it. Dragon Quest Heroes was mentioned in the video.

Bashing Square Enix is also a strange way to expect them to announce a game for you. Stop ruining it for those who still want to play their games.[/QUOTE]


People want to play their games, its just SE doesn't want to make them. (Hell even Heroes isn't made by them.)

The only people "ruining" it is themselves.

Just how I could ruin it, is beyond me.
I don't force them to spew forth mobile spin offs.

10 million copies of Kingdom Hearts sold, and they then spend the next ten years doing everything the to avoid more success with the series.
Last edited: Jun 13, 2015
X

It's such a shame their definition of bombshell is so different to mine...

The only thing I haven't worked out yet is which of us has the wrong one. It's either me expecting something too big because of how great they used to be or its theirs for assuming the thing they're about to announce is probably as good as the stuff they used to be capable of.

I've gotta be honest though, I've spent the past week replaying FF13 and while I can still justify every bit of the criticism it received there's still something about the game that screams "if I just had a piece of Squares pre-Enix soul in me I'd be absolutely incredible" and for that reason I can't help myself but give them that one last chance... Maybe two... Maybe.
Last edited: Jun 14, 2015

ugh....remember the excitement for FFXIII? The soul of SE went south. Think this is what happens when game companies think more about money than they do about games. Thing is, they made all their money by thinking about games. sigh
Last edited: Jun 14, 2015

[QUOTE="mynd, post: 6452337]People want to play their games, its just SE doesn't want to make them. (Hell even Heroes isn't made by them.)[/QUOTE]Dragon Quest Heroes wasn't developed by Square Enix but the series creator and composer were still attached to the project. I could also remind you that the company are developing console titles (this includes Dragon Quest XI), that Japan aren't only developing mobile titles, but your mind was already made up about Japanese games being inferior.

Dragon Quest Heroes was developed by Omega Force and Armor Project/Bird Studio plus a hand from Square Enix.

Yeah man that's exactly what happened with Square they put money over their fans.
Yeah it failed.