Today I will cover the review on Tales of Arise which will be covered on the perspective of since I played all games from Symphonia onwards as well as other aspects.

Basic introduction of the story
Story is set on two planets Dahna and Rena. The start of the story is the conflict on Dahna where the Renan's have ruled it for 300 years. Where the Dahnas are treated as slaves. Alphen who starts as a slave with a mask covering his face with no memories meets Shionne very early in the game to join in a mission to take down the 5 lords of Rena that have occupied Dahna.

The story itself the pacing feels all over the places as go around different parts of Dahna to meet 4 of the other party members. I feel like the story went too fast and didn't spend enough time explaining things. It is good that they tried to refresh the experience as you go from place to place in this Tales of entry.

Skits which are part of Tales series which usually has a mixed between comedy moments between the cast as well as story moments.

Which gives you more of a in-depth personalities of the characters are now comic panels with in-game graphics instead of the 2D graphics of the previous entries. Same issue with what I mentioned with the story that there are balance issues where for most of the game that the skits were too serious most of the game where all the comedy was later in the game.

Which allows for different costumes and attachments to be seen in the scenes. Which can be unlocked throughout the game or by DLC.


I mentioned most of the issues were pacing and lots of things I felt they should of explained especially the 2nd half of the game the conclusion that I felt disappointing. Lots of other Tales games felt better story wise. I did enjoy Shionne and Alphens journey but overall I felt the cast wasn't as good as other titles in the series. Villains weren't memorable but explaining the problems I had with some of the characters will take a while.
Story rating 6.8/10


Gameplay's camera angle is more in a front view. If you have played Tales of Graces f, Zestiria or Berseria you will know what I mean.

Gameplay is fun with implementing aerial combat in this mainline entry which they haven't done since Tales of Xillia 2 and no Artes trees in Tales of Arise which they had for Graces f, Zestiria and Berseria . Your characters can wield different attacks or magic which are called Artes which 3 Artes mapped by different buttons can be used on the ground as well as the air later in the game you can unlock more uses for artes. Normal attack button has returned for Tales of Arise.

Some can hit enemies in the air then you can follow up and use an arte to hit them on the ground. Dodging also returns if dodge at the correct time you can counterattack fast with the attack button. Dodging is very similar to Falcom's Ys of series games. 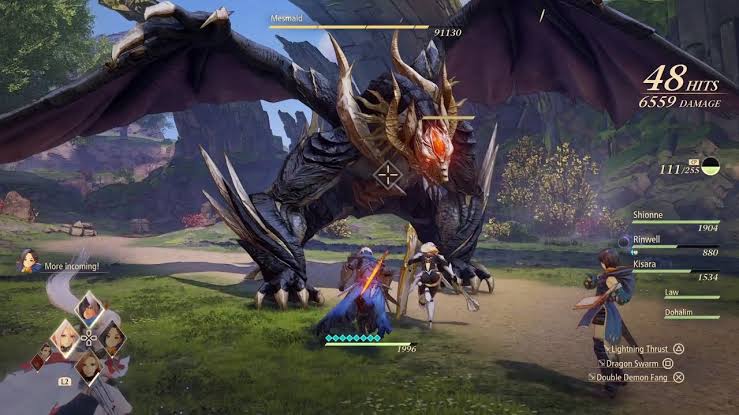 Big enemies you can destroys parts to make them vulnerable.
Also new to the gameplay are boost attacks which all 6 characters have different boost strikes to stun enemies in different ways where as Alphen can stun an enemy temporary with his sword and Shionne can use her gun to stun flying enemies.

Boost strikes are a new feature which is a co-operative attack between two party members to finish an enemy which shows an icon as the enemies health is low. If you played Tales of Vesperia or Xillia it is similar to Fatal Strikes and Link Artes.

Returning from other Tales games is Mystic Artes which are unique to each character as well as some enemies use them too. 2D cut in art is gone. Unlike other entries it's easier to dodge since enemy Mystic Artes happen more in real time.

I felt the enemies varieties gets repetitive after being lv30+ and the human bosses were not fun to fight at all with their powerarmour. But I did enjoy the inclusion of aerial attacks and the returning attack button rather than Arte trees which I don't mind either. But for newcomers the gameplay is a good entry point for the Tales series.
8.4/10
Last edited: Sep 25, 2021
Likes: NoUseMercenary and Libra-75

Graphics
Tales of Arise has upgraded their visuals a lot with using Unreal Engine 4 where as the previous entry Berseria came to PS3 in Japan. They have focused more on making the environments more beautiful.
The Animation is done by Ufotable which done all games since Xillia.
Graphics 8.8/10 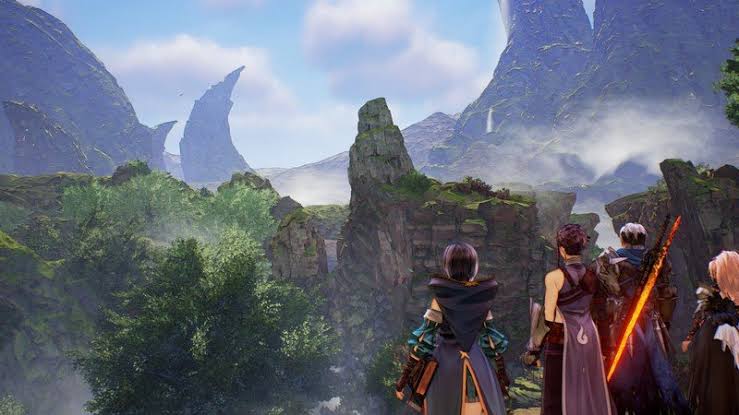 Music is once again composed by Motoi Sakuraba which has composed Golden Sun,Baiten Katos,Dark Souls as well as lots of Star Ocean and Tales games. But I think the OST is similar to other Tales titles but with a couple of new varieties.
7.2/10

Side content
Which is mostly lots of giant monsters,cameo characters from other Tales entries in a large dungeon as well as fishing. Wish there more varieties in mini games like they had with older entries. Vesperia and Berseria had fun mini games.

Overall
For someone who hasn't played Tales and appreciate visual upgrades,reasonable side content and fun gameplay this is a good entry point. For story which lacked a lot with pacing the characters weren't good or bad either.
Also note that the 2d mystic arte cut ins and victory scenes are gone which I miss which was from previous games.

Before I knew that the combat isn't turned based I wasn't interested in this game at all (since I don't like turn based combat). But now I'm actually a little bit interested in this, I might get this later down the line in a sale.

The combat seems to be combo based, is it?

I've never played a game in this series. You said it's a good place for newcomers to jump in, that's good for me if that's the case.
Likes: NoUseMercenary

Before I knew that the combat isn't turned based I wasn't interested in this game at all (since I don't like turn based combat). But now I'm actually a little bit interested in this, I might get this later down the line in a sale.

The combat seems to be combo based, is it?

I've never played a game in this series. You said it's a good place for newcomers to jump in, that's good for me if that's the case.
Click to expand...
Yup the combat is in real time. Mixing combos to keep your combo up and using boost attack to keep your combo count up.

Yeah I think the combat and the better graphics make it a good entry point for some.

Personally I prefer the other Tales games.
Likes: NoUseMercenary and Libra-75