After the incident with the dead pixel on the “Ok.” TV (the people who read my review will know what I mean), I went back to the store and got a new TV. The man who helped us was really friendly. He checked the screen with some kind of lamp and then he gave us a refund. We then decided I should get a different TV from a more common brand. That’s when I saw the LG 42LN5404, a beautiful 42” LED TV for the price of only €400! I couldn’t leave that there, so I went home with an even bigger, better TV than I did a few hours ealier. And this time (**SPOILER ALERT**), it didn’t have any dead pixels. So let’s have a look at this TV!

Let’s start off with the box. I don’t have any unboxing pictures with everything still in their packaging and what not, but I do have pictures of the box, the tv, the remote and everything.
The box looks good in my opinion. White with a purple~dark-pink’ish colour. I like it. Here is the box: 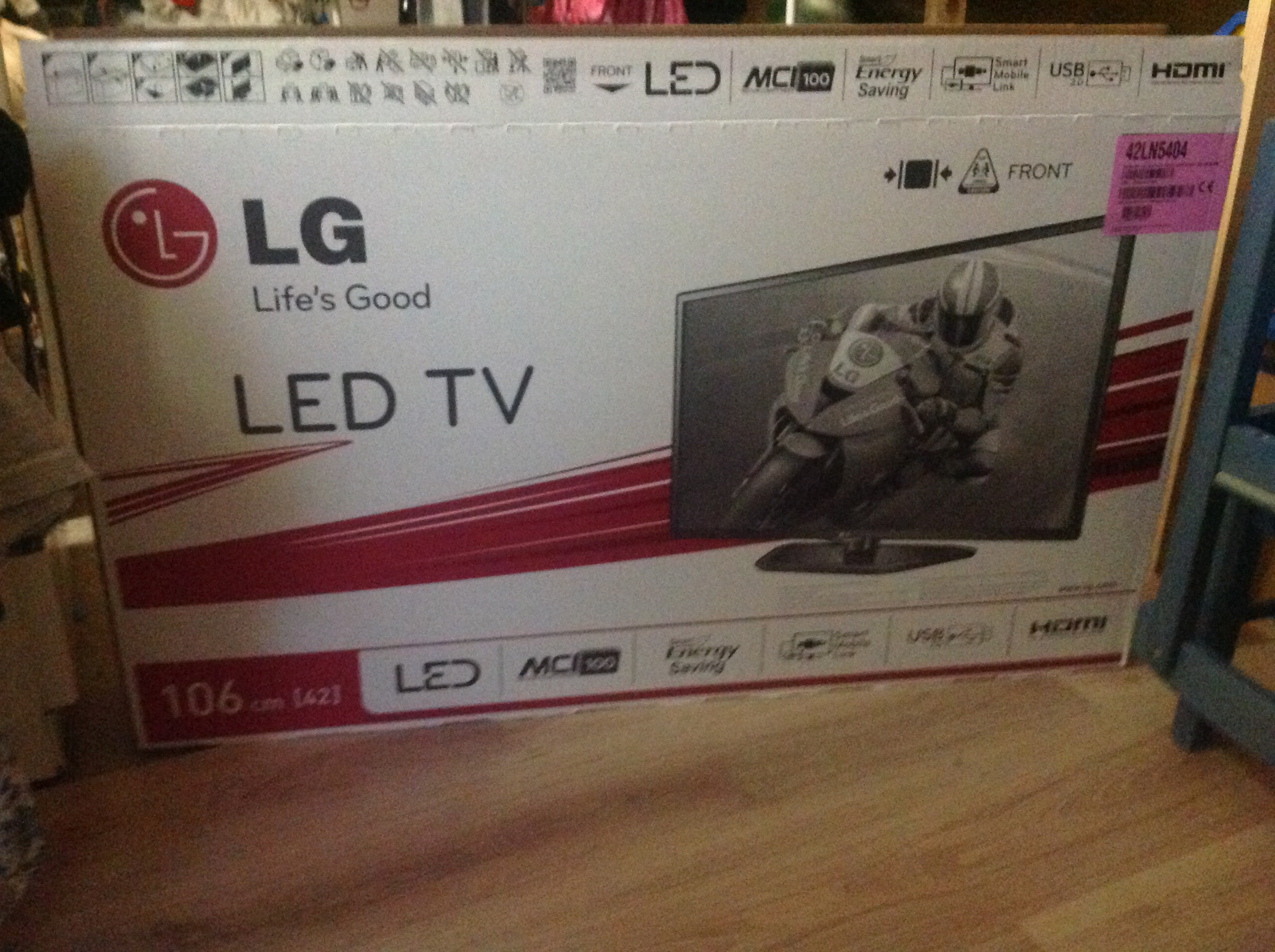 The remote control looks neat, I really like it! It’s not too big, and has a brushed aluminum look to it. It’s just plastic though, nothing strange there. Here's a size comparison: 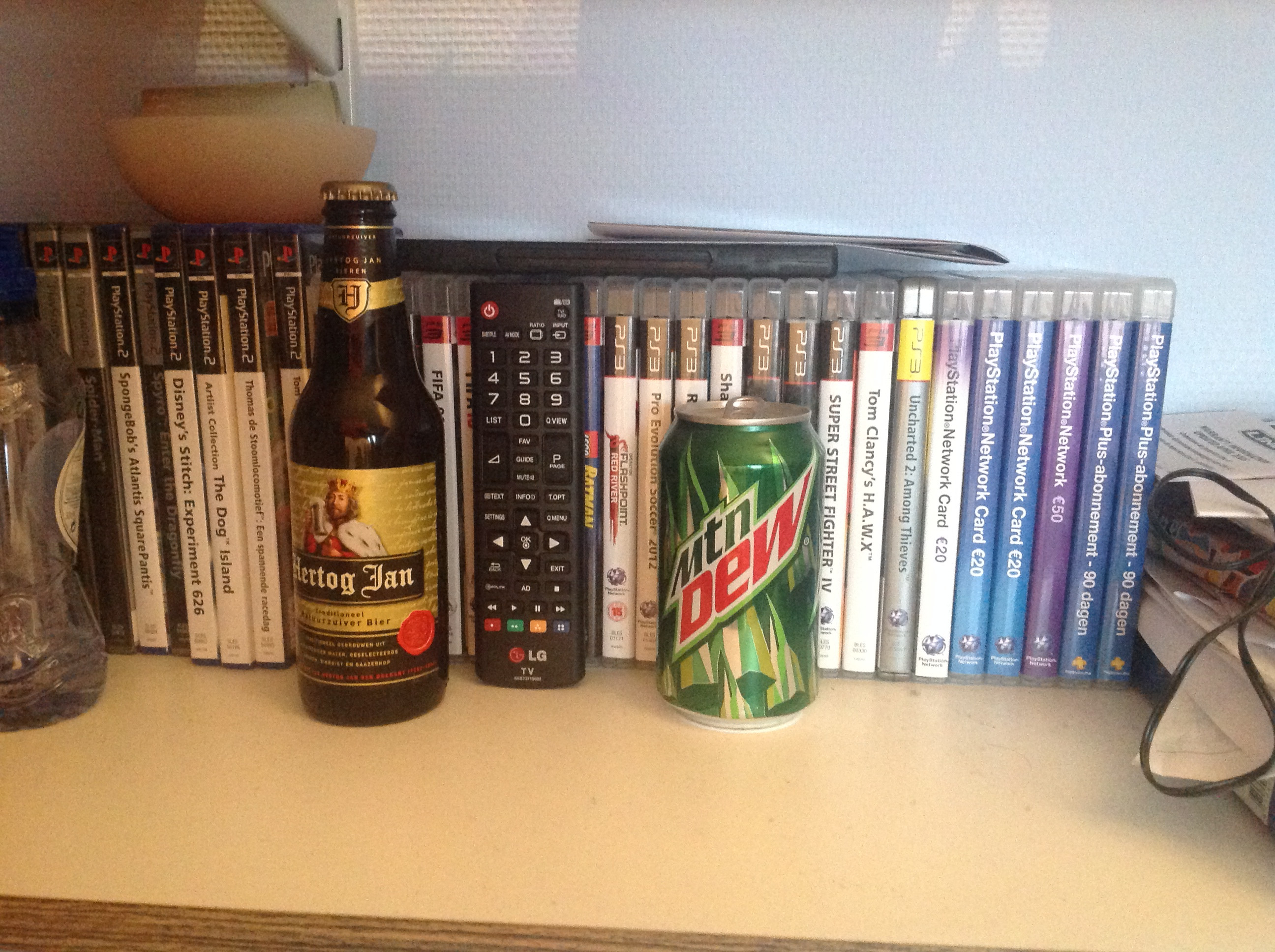 So now for the TV itself. Because damn this thing looks hot (at least that’s what I think)! When you put the plug in, you’re greated with a beautiful red LED (which you can turn off in the settings menu if you’re worried about your power bill). When you turn it on for the first time, you’ll see the LG logo popping up and then the setup will start. The setup is really straight forward, it’ll ask you if the tv is for home or in a store (if you pick store it’ll be setup as demo model), you’ll need to set your language and it’ll start looking for channels with either cable, satellite and whatnot. After this, you’re ready to go! 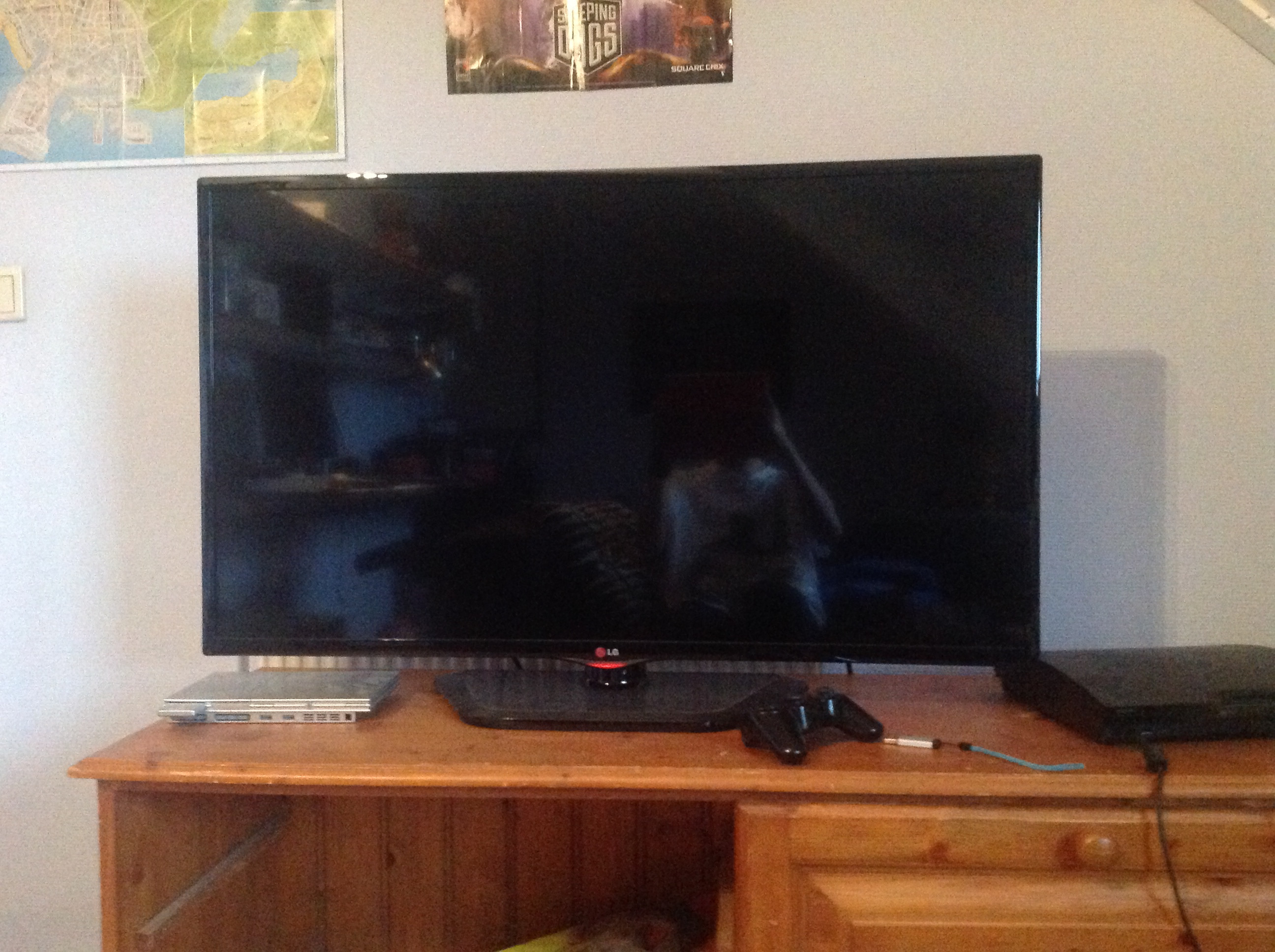 Worth noting too: the “foot” of the TV has a small hole which comes with a screw. You can screw it into your desk and it won’t fall off very easy! That’s a nifty little feature that might actually score this TV an additional 0.1 points on the final score! 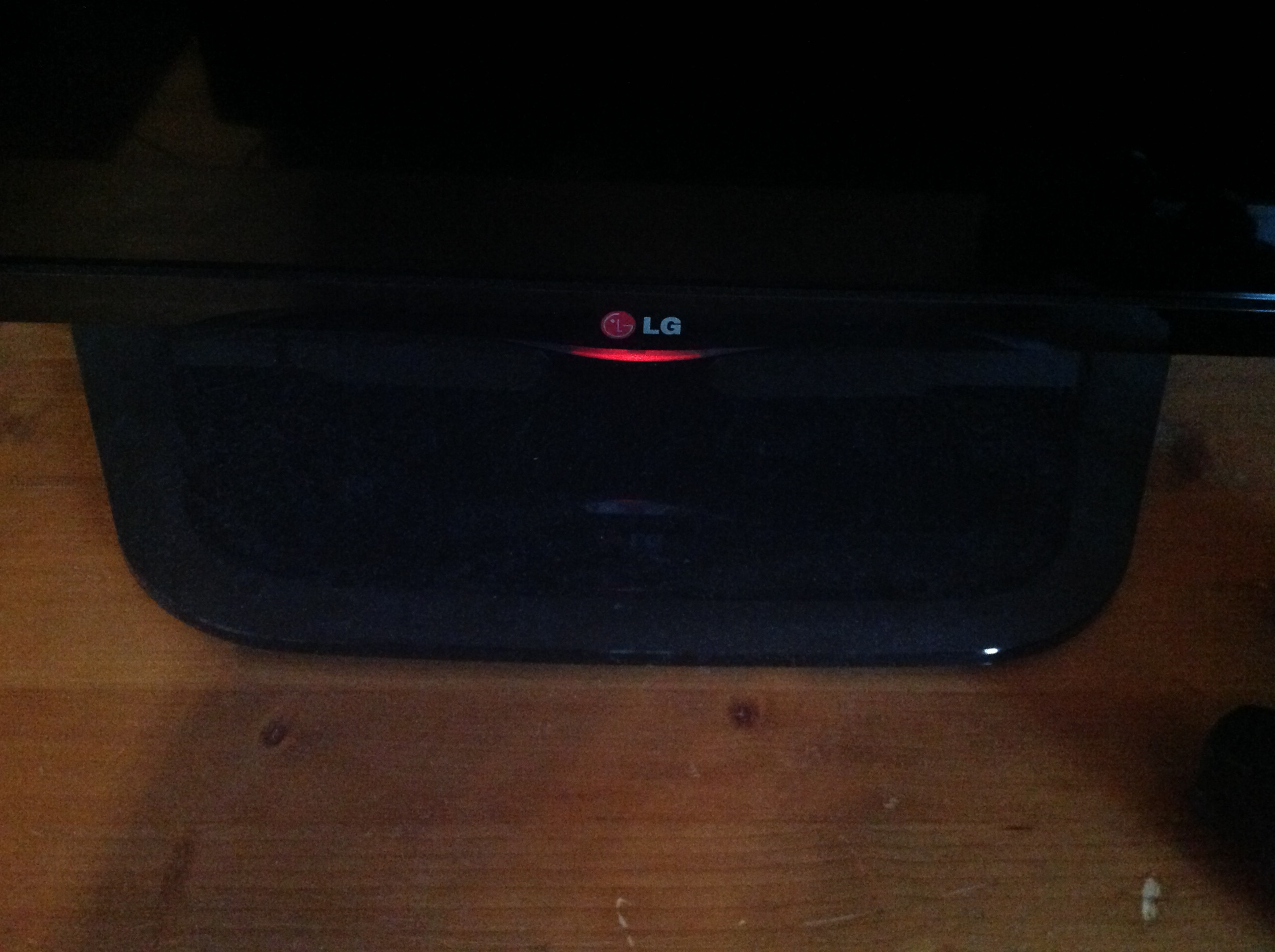 (screw hole not visible, it's on the back )

This TV isn’t “smart”. It doesn’t have android or anything like that on it, but I’m one of those people who don’t care about smart TV nonsense. I feel like I’d rather use my PC or iPod to check the internet and whatnot. This does mean there’s no real menu to show other than the settings menu, so let’s check that out.

The settings menu is divided in 8 different sections: Picture, Audio, Setup, Time, Lock, Option, Input and My Media. I’m not showing that last one, but it’s very, very handy. If you have an USB stick or external harddisk, you can put it in the TV and watch movies, listen to music and check photo’s that are on that disk/stick! I really like that, though I use my PS3 for all of my music. But if you don’t have a blu-ray/DVD player or a console, this might just help you out.
Let’s take a look at the menus. 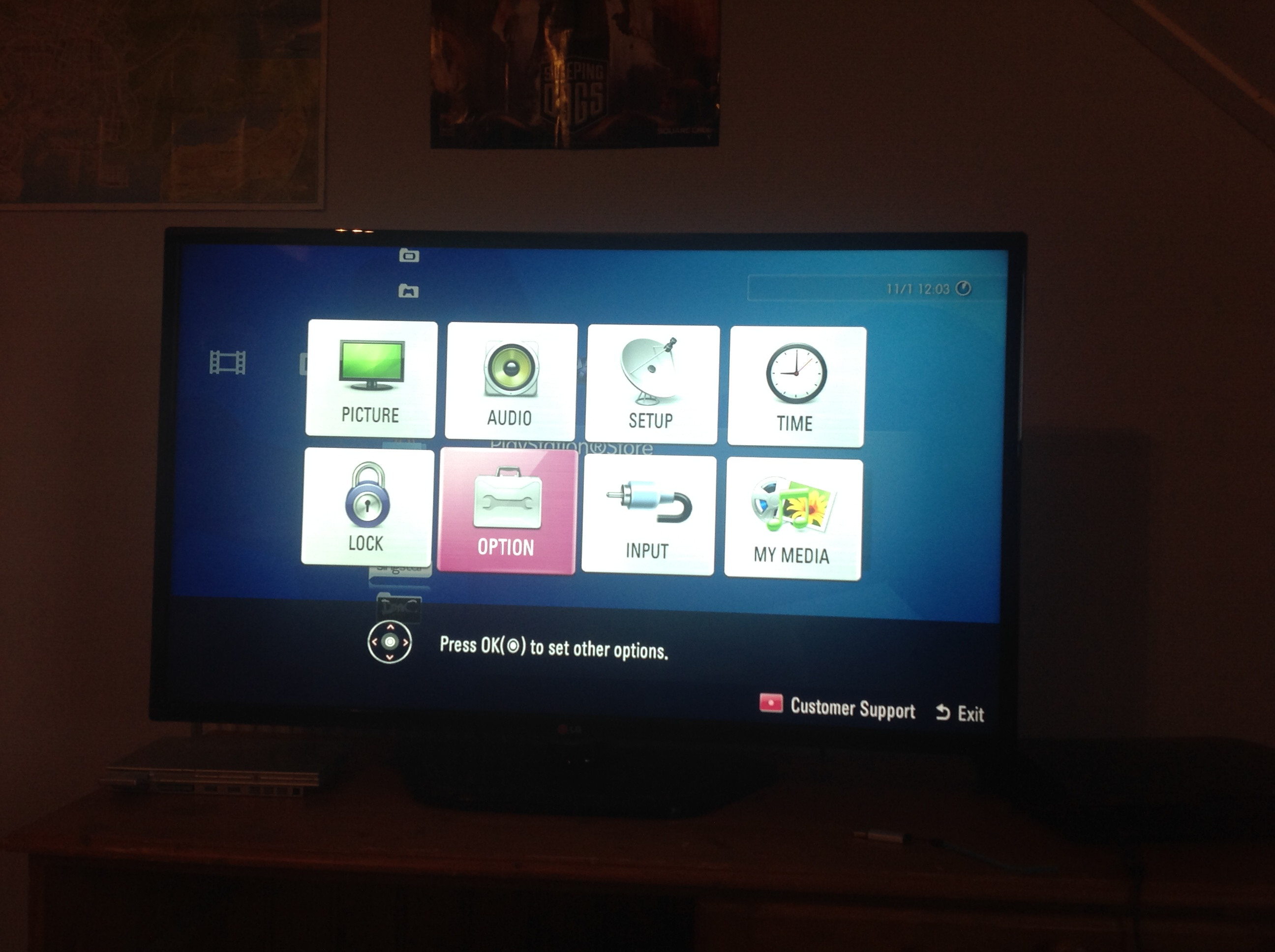 Picture:
This menu is used to change all of the settings that’re relevant to the screen. Contrast, gamma and whatever are changed from there, as well as picture mode (for example: normal, cinema, gaming). 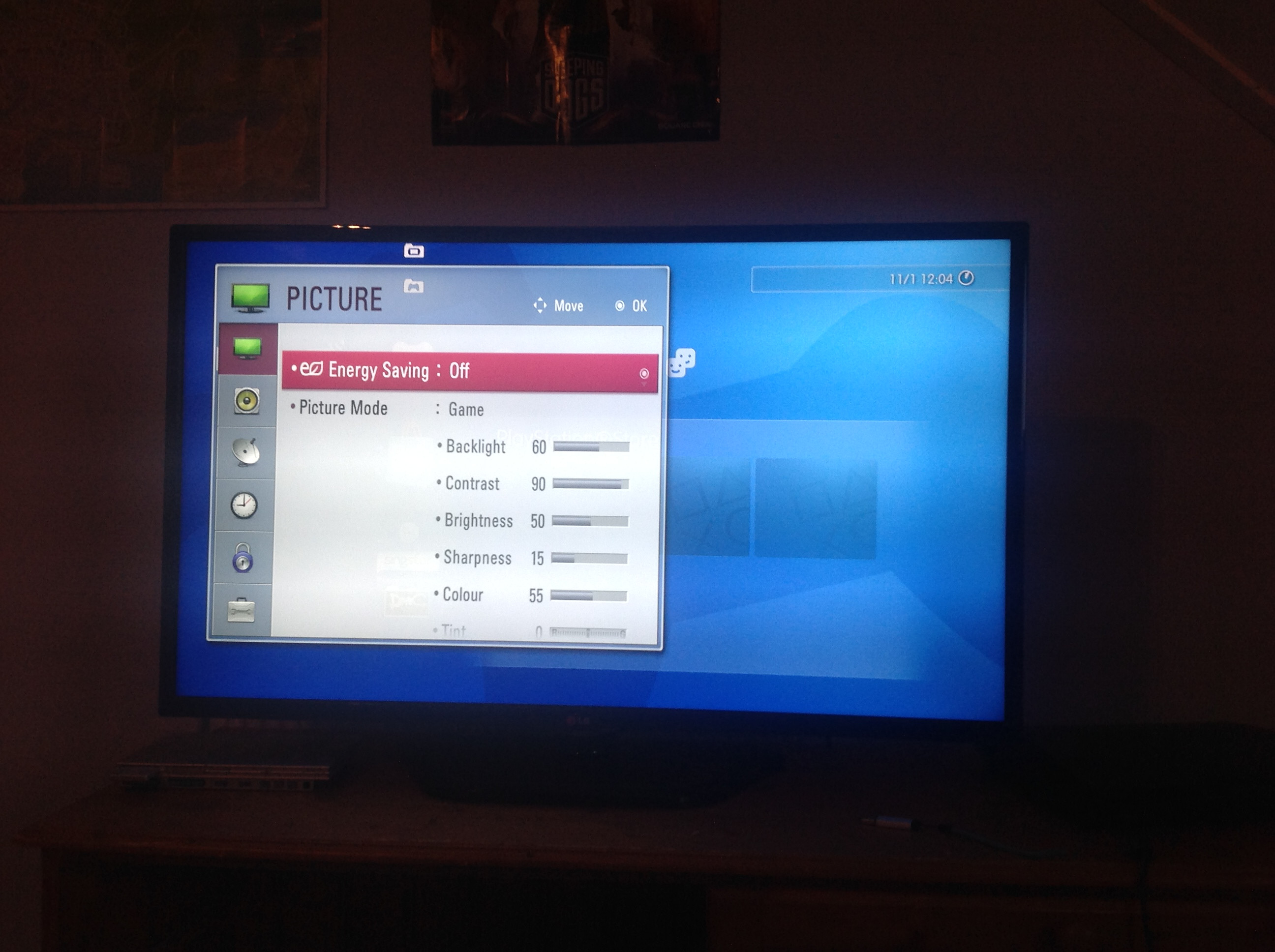 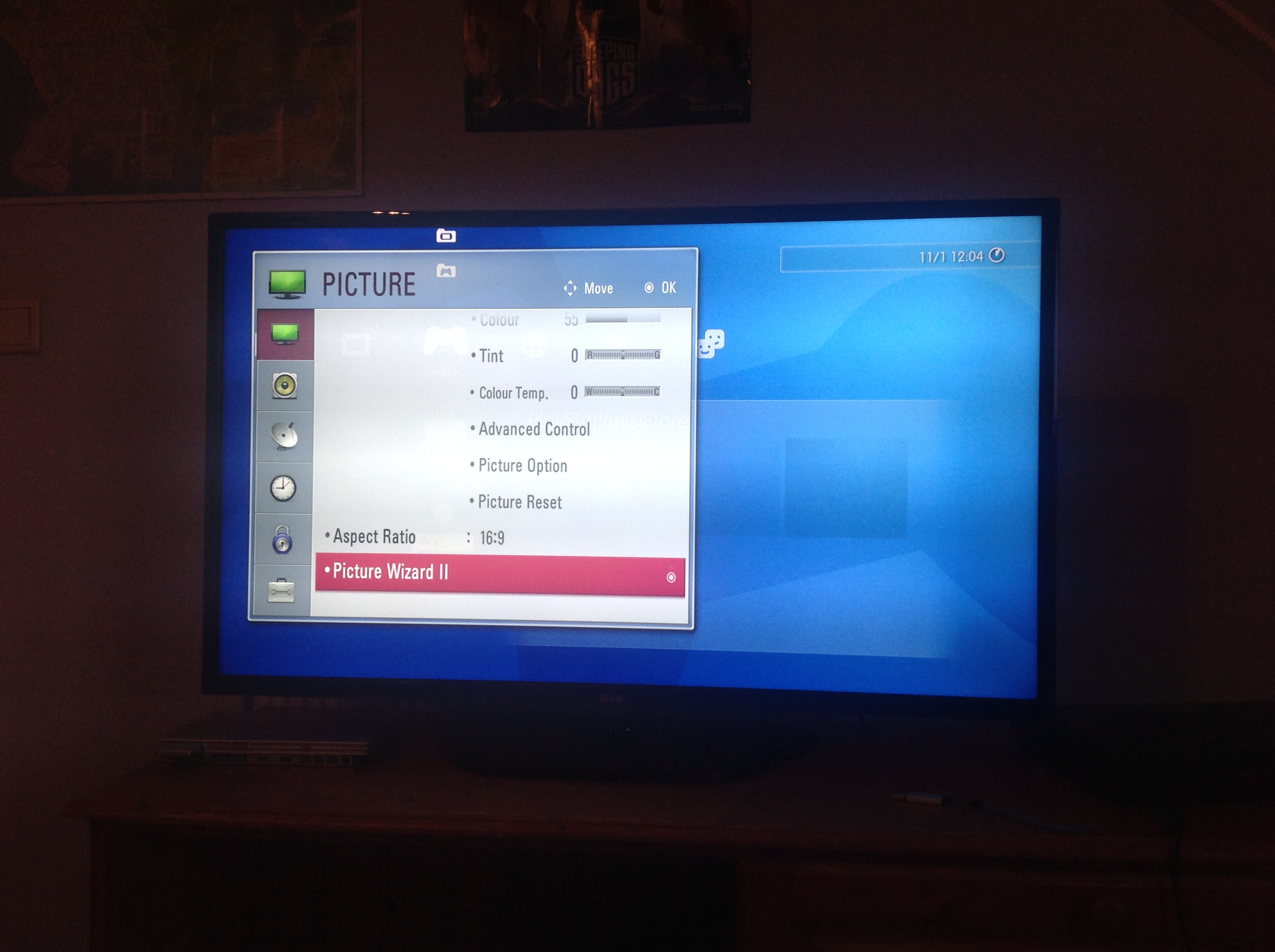 Audio:
Same as with “Picture”, only this is everything that has to do with audio. Worth noting: you should change your sound optimizer to either “stand-type” or “wall mount-type”. That, and you should really enable digital surround sound in my opinion. That should give you a little better sound. 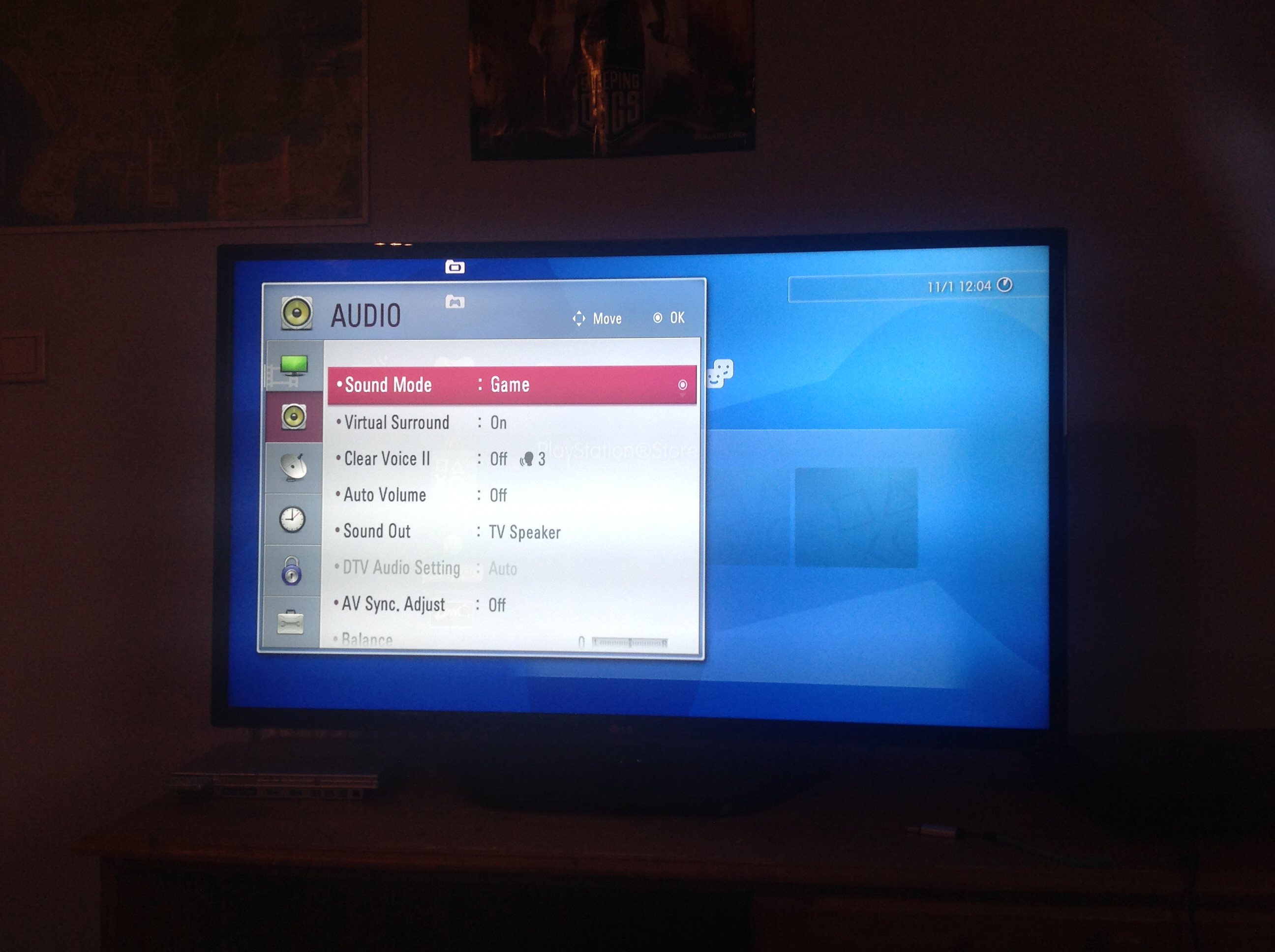 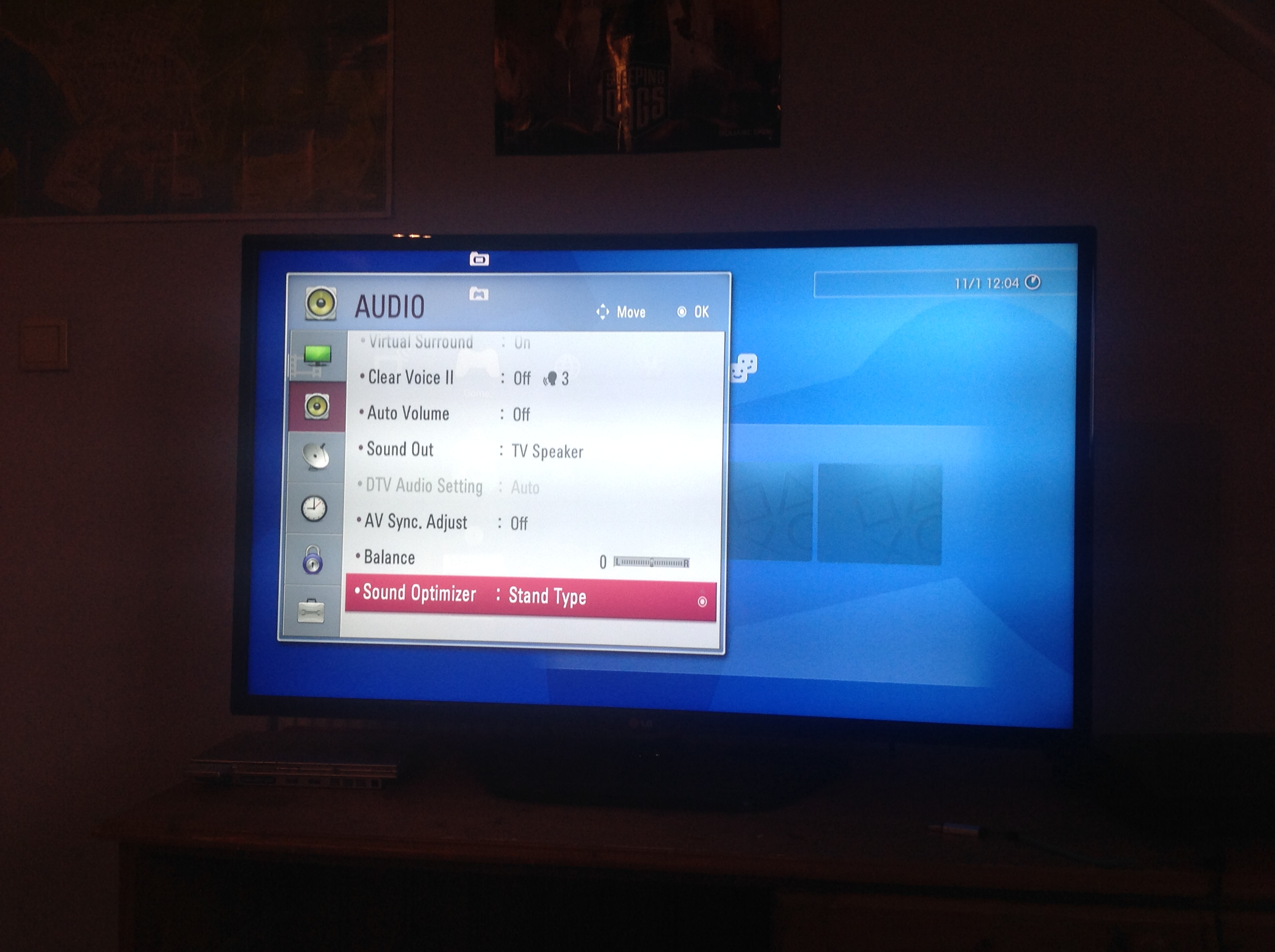 Setup:
Setup is for the TV channels and whatnot. Use this if you want to install a new decoder or whatever. 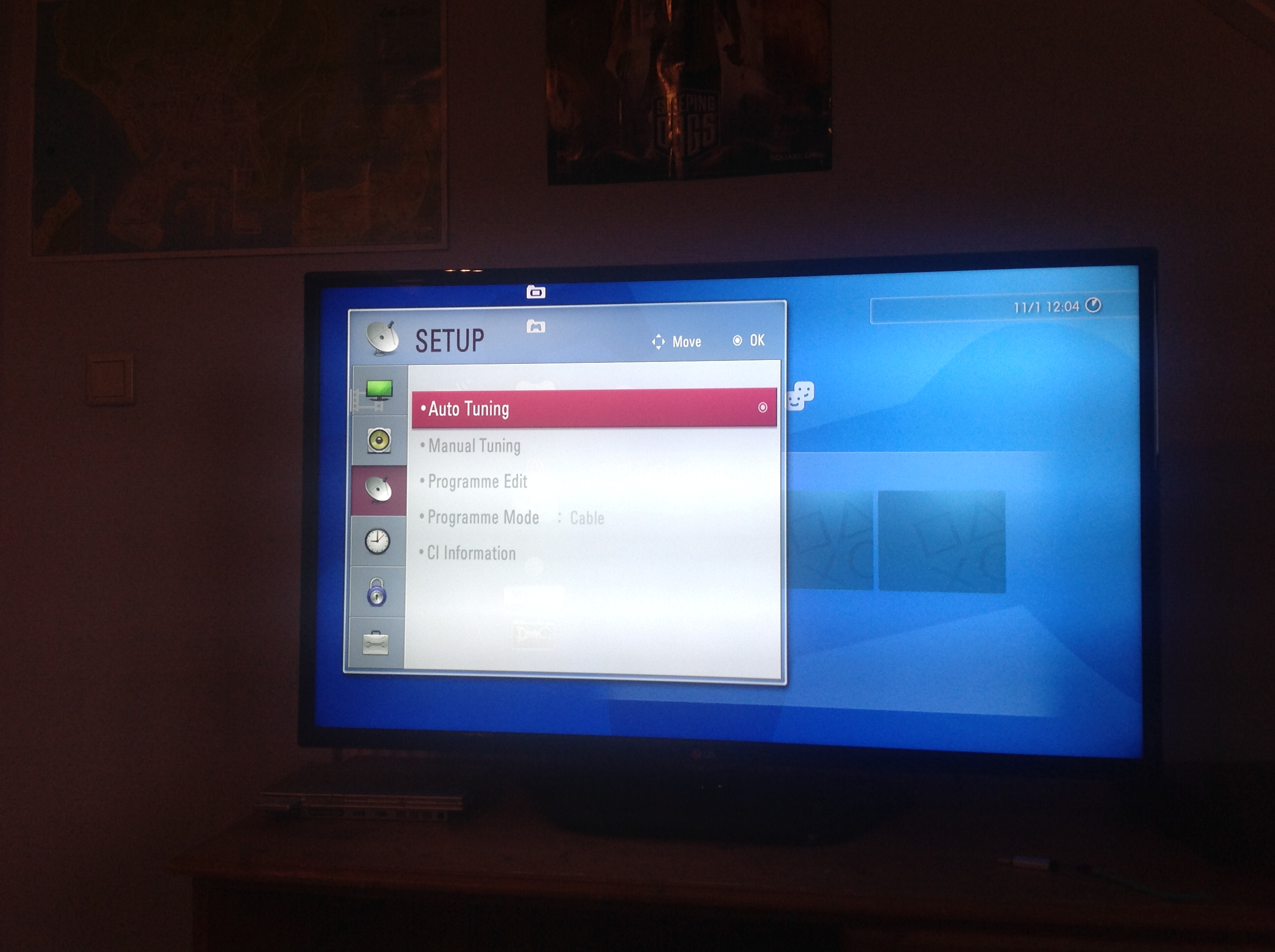 Time:
This speaks for itself I think. Use this to set date and time. 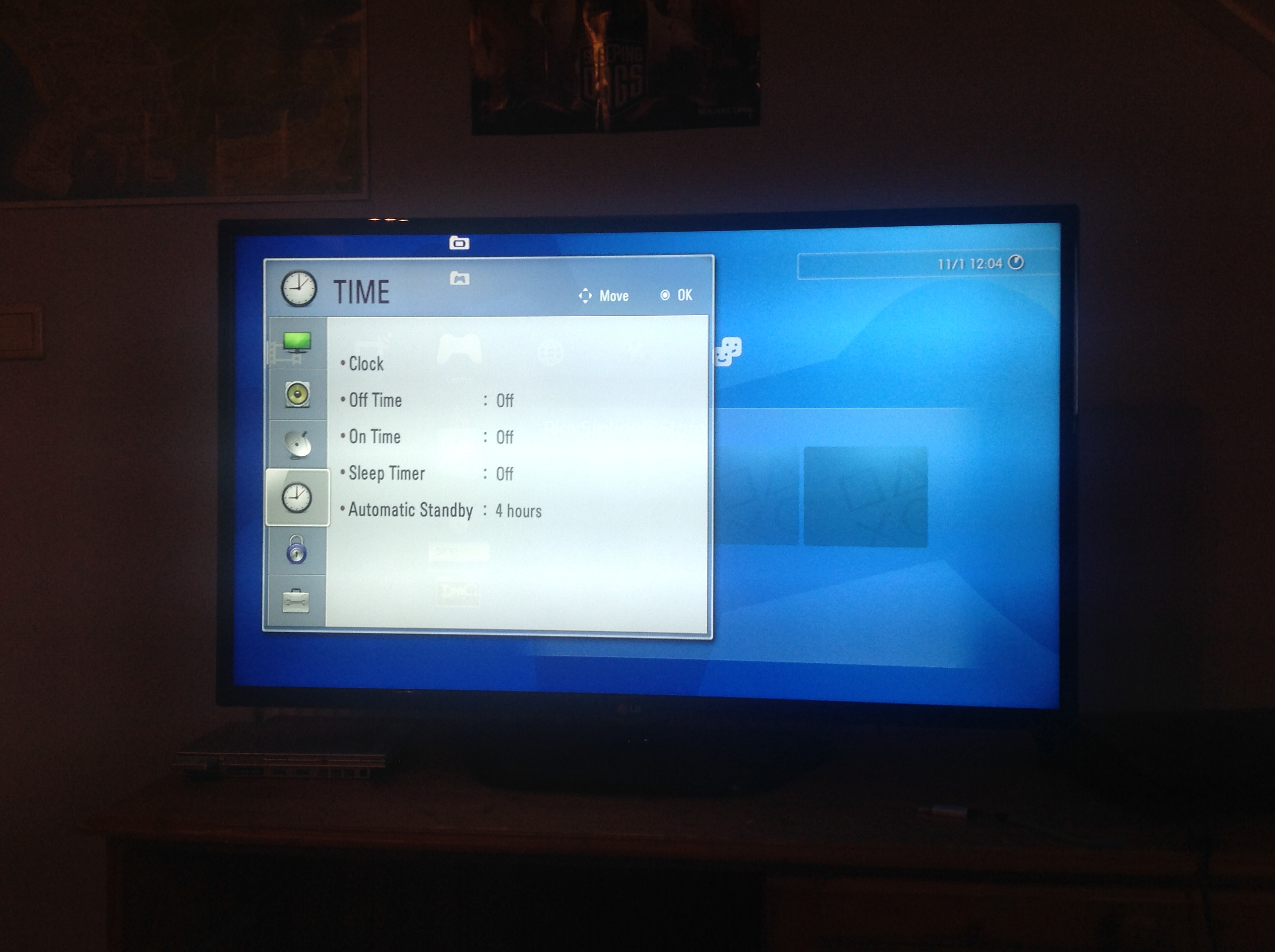 Lock:
This is used to set a password for certain channels, parental guidance and whatnot.

Option:
Used for general options. Language, Country, Standyby light (on or off, like I said ), DivX VOD (no idea what that is) and home use / store mode. 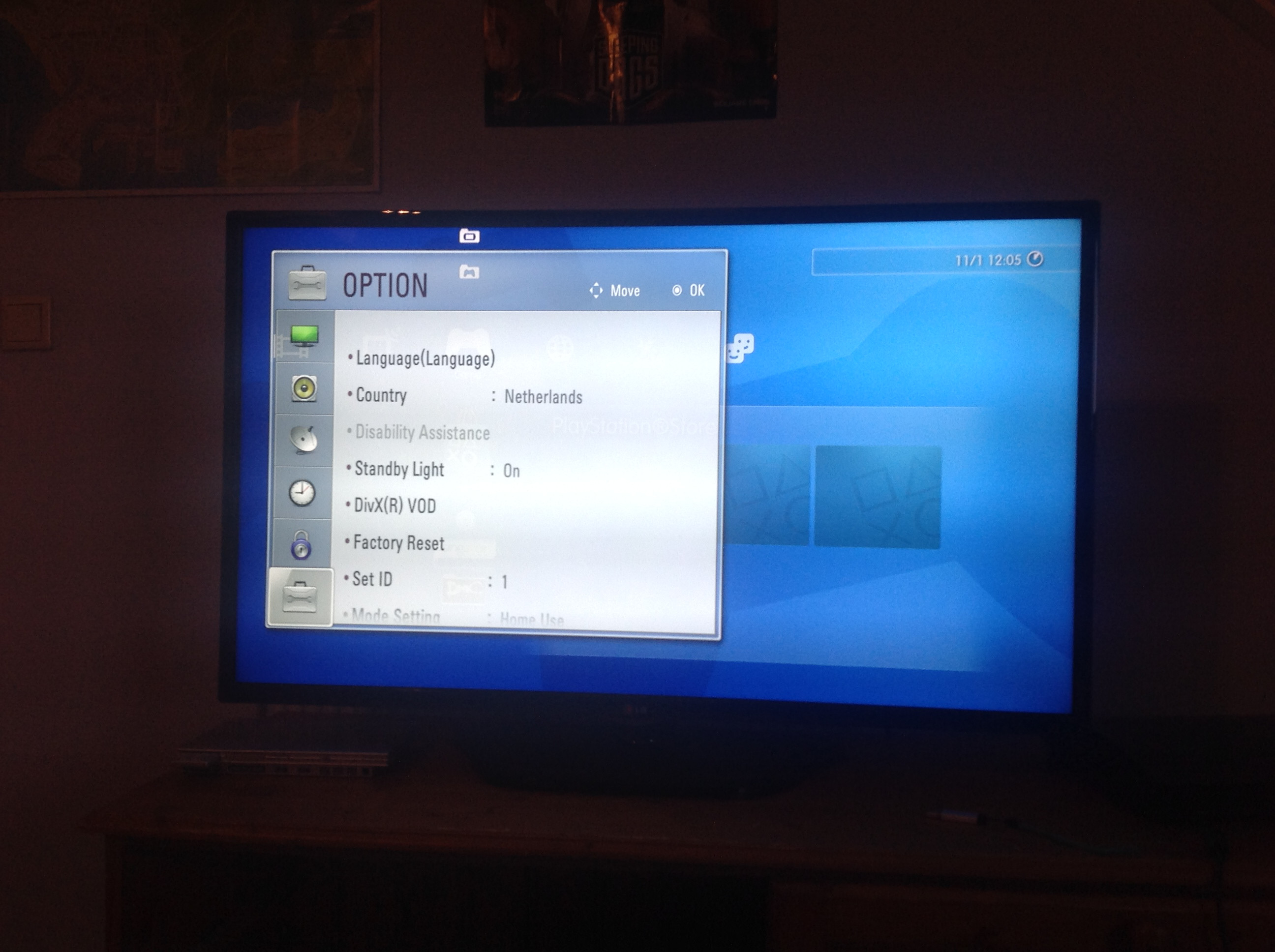 Input:
This is actually useless, as there is a “input” button on the remote control. It let’s you change the input (HDMI, USB, AV). 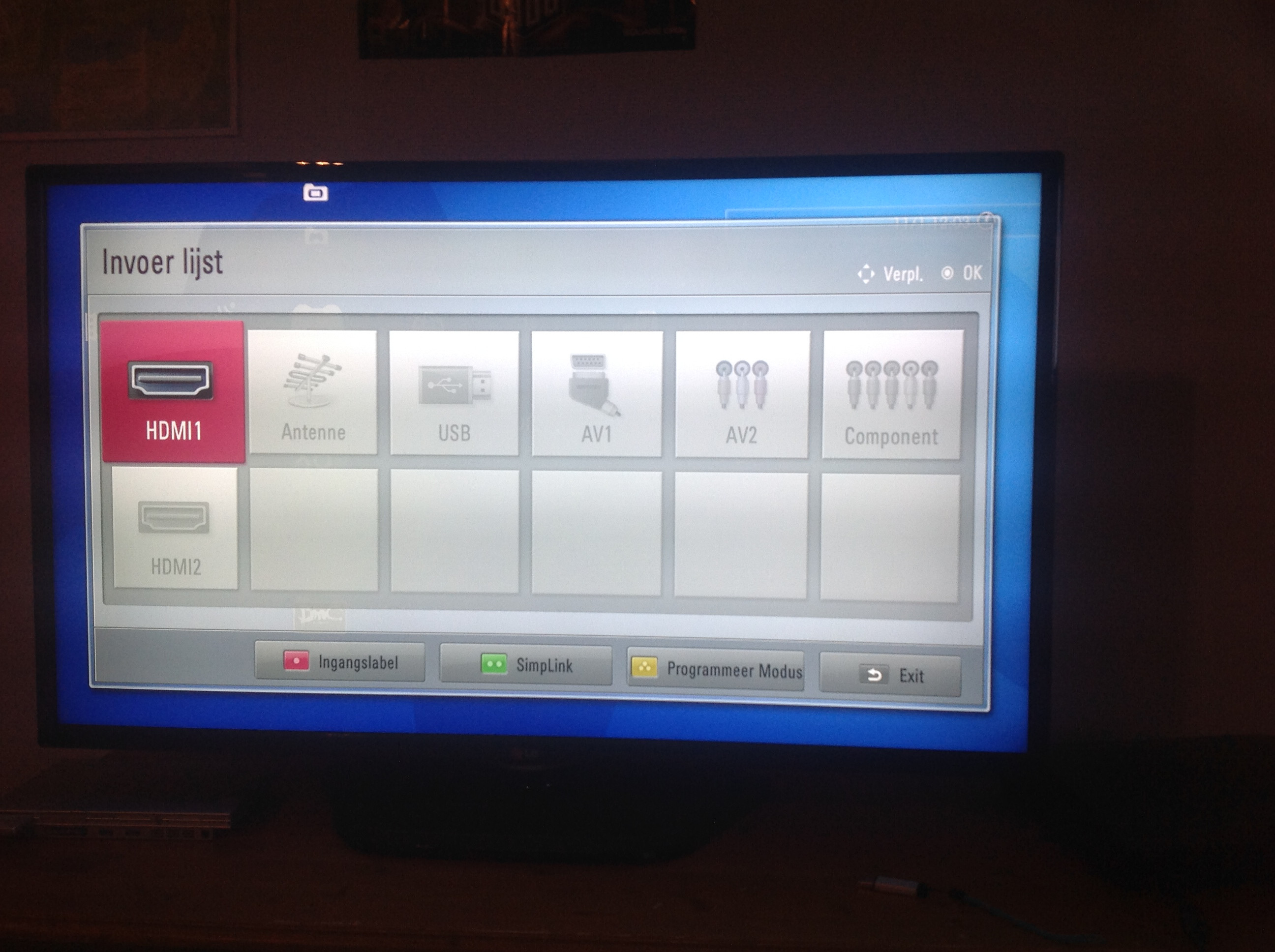 Well, that’s the menus taken care off!
Now let’s get to the main part of the review. The image quality.
Actually, most people with an HDTV will know what I’m talking about, as it’s nothing special with this particular TV. It’s what you would expect from an HDTV with a LED screen and 1080p support. Fairly straightforward I’d say. It’s a huge upgrade from what I had though. I used to game on a small CRT TV, and now I have this. I really needed it. I bought GTA V shortly after I got this TV and it looks amazing! I sit quite close to the TV, I’d say about 1.2m away, and I can’t really see that much pixels at all. Of course, the PS3 could use a lot of Anti-Aliasing, but that’s not the TV’s fault! This TV deserves a PS4. Or a Steam Machine. Or an XBOX One. But I’m broke, so that’ll have to wait. Long story short: standard quality. Looks good to me.

Well, it’s hard for me to talk about sound actually, as I’m anything but an audiophile. The sound isn’t anything to write home about I can tell though. It’s not very hard (quite soft actually), and the quality isn’t great. But hey, what would you expect? This is a €400 TV. That, and you can use external sound devices, like actual home cinema sets, or a sound bar. I like the concept of a sound bar.

This TV is better than the “Ok.” one. That’s for sure. Not only that, it’s also bigger and better. And that’s for only €25 more. If you’re in the need for a new TV and you have a budget of about €400, I’d recommend this TV to everyone. If it came in white, it would make the perfect TV for €400 in my opinion. But in black it’s still very, very good. A no-brainer I think.

Pro’s: Price, foot has screw hole so you can screw it to your desk, nifty standby LED, image quality.
Cons: not white.

I'm glad you enjoy it. LG is one of the more reliable brands. I pretty much only buy LG monitors for PC.
Their TV are quality too.

[QUOTE="John Willaford, post: 6280696]I'm glad you enjoy it. LG is one of the more reliable brands. I pretty much only buy LG monitors for PC.
Their TV are quality too.

Cheers.[/QUOTE]
Oh well, already screwed it into my table, it's really old though so it doesn't matter anyway
My sister bumped into it so I was really glad it was attached to the table :lol:

[QUOTE="Lethal_NFS, post: 6280718]I have the 55" version of this TV. It is a damn fine TV[/QUOTE]
I agree for 100%, it's great for the price in my opinion, and it's so much better than the CRT TV I had! Glad I got this
You must log in or register to reply here.
Share: Facebook Twitter Google+ Reddit Pinterest Tumblr WhatsApp Email Link
Reply