A true gem that hit it out of the park, especially early in the console cycle for Xbox 360, Lost Odyssey is a true turn-based RPG that respects its' roots and shows that new JRPGS today can be like the old ones back from the glory days. Lost Odyssey was created by Mistwalker Studios in part of a two game deal with Microsoft that previously released Blue Dragon. At the company's helm is the father of Final Fantasy, Hironobu Sakaguchi.

The biggest challenge an RPG faces outside of its battle system is telling a worthwhile story. If you played any typical JRPG, you know you'll be traveling across some planet in search of an external goal while you battle various creatures in all different kinds of terrain. The story is the driving force of why you care the protagonist needs to find some item to save the world, or reach some destination to confront the evil forces.

Lost Odyssey tells a tale that has you care about what's going on, why you should like/hate some character, and makes you feel emotions for the war scarred Kaim, who also happens to be immortal. Kaim starts off as some one-dimensional character, not expressing much emotion or care about what's going on. He comes off as a mercenary going from battle to battle, with centuries of his life completely erased with no recollection of past events. With no purpose or motivation, he sticks to fighting, something he still understands. 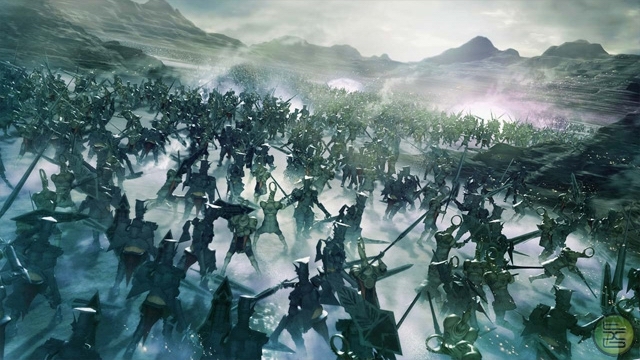 The journey begins with Kaim battling for the nation of Uhra, currently warring with Kent, a nation of beastmen. It isn't until after Kaim returns to the city of Uhra that the story unfolds. Here Kaim befriends Seth (another immortal unsure of her past) and Jansen, who serves to be the comic relief. The three set out to a place known as Grand Staff, a giant structure that produces magical research that if in the wrong hands could be used as a powerful weapon. Once they reach their destination, the events start to unwind, and our heroes find themselves in-between a conflict that will have the entire world at war.

Without going into too many details of the story, the game tells a typical tale of heroes who must save the planet from an evil force who controls a great power that can crumble entire civilizations. The part that really shines is the character development and pacing of story. As you journey through the game, you will come across these events that will jog Kaim's memory of his past and will unlock these dream sequences.

Each dream sequence is a different event in Kaim's thousand year past, involving different people and situations. They are entirely text based, with a musical score in the background. It serves to explain Kaim in greater detail, understand him on a more human level, and to contrast who he is in this year without his memory. Some of the stories are sad, some explain more background details of the game, and some build his character. 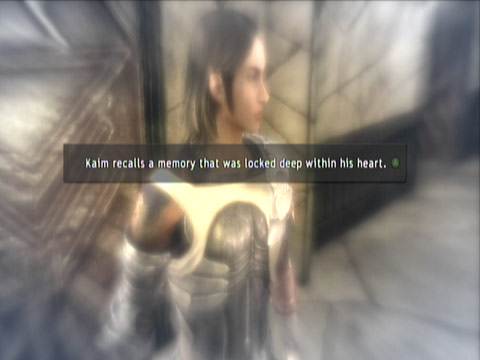 At first many of the characters feel flat and uninteresting, but as you get through the game and further into the discs, the characters internal struggles and motivations all take center stage. The story is not the most original, the plot is something you have already seen, and parts of the story are very predictable especially when dealing with the villain's goals. With that said , it is a solid experience that has you traveling across the world while keeping you interested. Not the best story, but still good.

Lost Odyssey isn't the best looking game for its time, and the unreal engine definitely has some issues in the game. A big turnoff to many may be the art direction in terms of costume choices for a majority of the cast. Kaim doesn't look like a cold war hardened individual, and Queen Ming, a character that joins you later in the game, looks a bit distracting and sometimes is hard to take serious during some of the more emotionally driven scenes.

The environments are diverse, you'll go through forests, snow plains, caves and other typical RPG settings. They can be very pretty as you walk through the magical forests and the mist around you sparkles with each step, however it's something you have already seen in a bunch of RPGs before it.

This is probably where Lost Odyssey really nails it. The soundtrack, composed by Nobuo Uematsu, brilliantly adds so much emotion and power. The battle themes, the soundtracks that play during intense story moments, the villain's soundtrack, each is unique and top notch quality. This is something that really stuck out to me, an incredibly good soundtrack that helped carry key emotional moments in the story that further explained a character or the villain's primary goal. If there's one thing that will stick with you from this game, it's the soundtrack.

The battle system in Lost Odyssey plays a lot like older entries in the Final Fantasy series. You have characters who can inflict physical damage with melee attacks, and you have characters who can cast magic that either heals you or deals damage. However, there are a few features that Lost Odyssey does to branch away from the traditional formula.

The other major feature is an aim ring system. Characters like Kaim can equip rings that have certain status effects. During battle, each time Kaim goes to attack, two circles with appear on the screen and once they intersect, the player releases the button press. Depending on how well timed, you can score different levels like 'perfect' or 'bad'. Depending on what ring is equipped, they can potentially do elemental damage or status effects based on how you're graded. It isn't the biggest feature, but it adds more to gameplay then just pressing A to have the character attack. As you would expect, the magic in the game is like any traditional Final Fantasy game. Black magic does destructive elemental magic , White magic is used for healing, and Spirit magic is mainly for buffing stats or restoring status effects. There's a fourth type, known as Composite. Composite takes two different spells and combines them together to attack multiple targets or heal multiple allies. Composite mainly is a beefed up fire Spell that hits all targets, or a cure spell that heals multiple friendlies.

Once you have a full party, you get five characters consisting of a front and back row. Front row for strong melee attackers/members who can soak damage, back row for support and magic. Overall, if you've played Final Fantasy IX, it will play a lot like it. Mortals learn skills by equipping items, immortals link to learn those skills. Each victory helps you earn experience to learn the skills from the items.

There is some bad news for those that like to grind experience. The game caps you when you reach a certain level, and the cap doesn't increase until you've reached further into the game. A sad discovery, but reaching the cap is pretty easy, making random encounters more of a chore when nobody can really level up and you're trying to find all the treasure before you leave the dungeon.

Lost Odyssey came out during a time starved of good JRPGs for the consoles. It wasn't rushed, there wasn't content cut out, and there wasn't delays. It's a good solid RPG that delivers a good character driven story with a traditional gameplay, that unfortunately feels like a few too many ideas came from Final Fantasy IX. For this console generation I would rate it high among other JRPGs and at this point I bet you could get it cheap. Definitely worth the experience for any gamer looking for an RPG fix.

+ Solid story that keeps you interested while traversing the world map

The dream sequences really made this game, otherwise I don't think I could of pushed through. The central villain was hilariously cliche and the dungeons were really archaic for no reason other than to be nostalgic. And the kids, geh!

Still, easily the best game Mistwalker has put out this gen. Loved the soundtracks as well, and was a big fan of the camera work used in the battle system. You should of mentioned the camera!
F

I love this game. Last Story is great too.
C

woo hoo, i am so excited and just can't hide it
D

[QUOTE="upmagic, post: 5981235]The dream sequences really made this game, otherwise I don't think I could of pushed through. The central villain was hilariously cliche and the dungeons were really archaic for no reason other than to be nostalgic. And the kids, geh!

Still, easily the best game Mistwalker has put out this gen. Loved the soundtracks as well, and was a big fan of the camera work used in the battle system. You should of mentioned the camera![/QUOTE]

Good point about the camera! Totally slipped my mind. Definitely something I enjoyed too. The dream sequences were pretty vital. I agree about the dream sequences, they do a lot in regards to adding to the story. Without them I would've probably thought the game was a bit too bland.
D

What I played of the game was really good, but the boss battles were steep, and this point you made is how I felt about the whole experience.

- Level capping characters to prevent grinding
Click to expand...
I know lots of people like to grind, but I don't. Anyway, good writeup adding to the index now
S

Yeah, I think RPG fans are divided on grinding, whether it's a negative or a positive. I just didn't like it because it wasn't hard to reach the forced cap in any dungeon.

As an old school RPG fan, I like the ability to grind for a boss if I desire, or just level up a level or two over if I'm taking my time in a dungeon. If you lose against a boss a few times and come back overleveled, it's kinda nice.

The really old FF games were effing brutal about grinding. If you didn't, you would fail and I found that to be annoying. Agree with you about the boss battles, some had a really steep difficulty. Might add that tidbit into my review.
F

It was a good experience but not the best. The story was weak in a lot of areas along with exploration which this game really needed since it's open world(Not like PSOne Final Fantasy's open world though). For one that celebrates sea travel, there wasn't much to discover.

As per the story I personally love the characters! Kaim was mysterious yet apathetic of the world around him. It's only through the dream sequences that you truly start to appreciate his character and understand him. I admit that some are well executed tear-jerkers while others describe the hardships of war in great detail.

The villain on the other hand was so artificial, obvious and over-exaggerated. I couldn't stand to accept that something like him(While his methods were indeed cruel), was the main threat.
F

Yeah, Lost Odyssey isn't the best story. I know that with Last Story you get a much, much weaker story. It's a shame given you kind of expect great stories from the Final Fantasy creator.
You must log in or register to reply here.
Share: Facebook Twitter Google+ Reddit Pinterest Tumblr WhatsApp Email Link
Reply