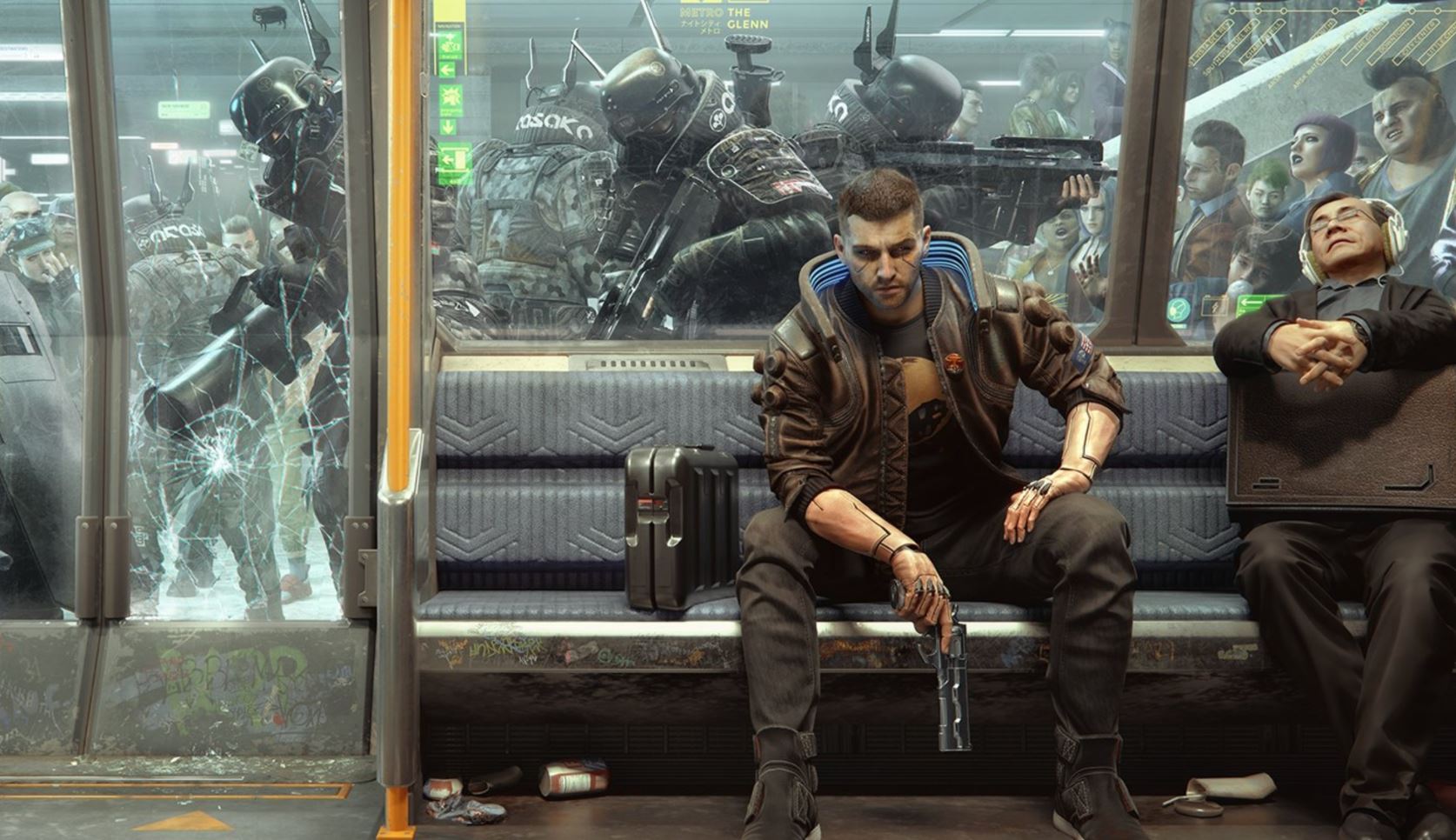 Editor’s Note: Please keep in mind that this is not our full review and these early impressions are based on 10 hours with the game and getting through the majority of Act 1 in the main story. We will be providing updated impressions as time goes on, with more details leading up to our full review in the coming weeks.

The first thing to know about Cyberpunk 2077 is that the actual game flow and your freedom reminds me a lot of Grand Theft Auto V. The world is the real character here, much like it is in Grand Theft Auto. Night City is an absolute wonder and a city unlike anything else I have experienced in a game.

Night City stretches as far as the eye can see and is taller than you could have ever imagined. The city is bustling from street corner to street corner, highrise to highrise, and Burrough to Burrough. And within each section of this city are dozens, sometimes hundreds of NPCs on a level never seen before in an RPG. It is truly impressive to look over the balcony and see every single person living their lives and going about their day in Night City.

And, much like Red Dead Redemption 2, it feels like each of these people have their own lives schedules and things they are doing, with some having a conversation with friends, some walking about. One thing I saw early on was when I entered a small shopping area in a highrise, as I walked past a bar, a woman dynamically left that bar and walked past me, after she had finished her drink. It felt dynamic and like the world was living and breathing around me rather than reacting to me.

Now, it might have been programmed that this person would start walking when I got X number of meters close to her, but even if that is the case, the sheer amount of NPCs living their lives in Night City is unprecedented and it feels fluid, ever-changing, rather than static and rigid.

The real meat and potatoes of the game are the characters you will meet in Night City. The map is littered with Side Jobs, which is where you will meet most of the main characters outside of the core story. These Side Jobs and the characters within them all have their own stories to discover and play through, much like the quests you would find in previous CD Projekt Red games.

I have only had a chance to check out a few of these so far, but they are as wacky and crazy as you would expect from a game where you can customise any part of you and be whoever you want. For example, one quest had me drive someone to a Ripper Doc because the penis modification he installed had previously been recalled and he was suffering extreme pain in the genital area. This quest was made so great thanks to the incredible voice acting Jesse Cox did. And, much like him, everyone brings their A-Game when it comes to voice acting in Cyberpunk.

This voice acting is accentuated by excellent writing that is some of the best I have seen in an RPG. Dialogue choices and conversations between characters are fascinating as they slowly drop in little bits of lore and build out the world that once was and the world Night City is a part of today. And, although I haven’t been able to see how choices would affect my playthrough, by trying to different options, I can easily see the breadcrumbs being laid for completely different scenarios both within a mission and later down the line.

When it comes to the gameplay of Cyberpunk, although it is pegged as an RPG, the game’s systems and mechanics haven’t quite piqued my interest yet and I have been having way more fun with the game as an action title, shooting people up and using grenades and cover when I can.

Gunplay is surprisingly polished and feels better than The Witcher 3’s melee combat ever did, although melee combat in Cyberpunk is still yet to be tested properly. Right now it feels like a slightly deeper and polished version of what you would expect in Fallout.

As for the RPG systems, you have your standard inventory, which is filled with weapons, mods, crafting components, armor, wearable clothes, and gear to equip and use. On top of that, you have a collection of skill trees, divided into six attributes, such as Cool, Intelligence, Brute, etc. And, within each of these attributes multiple trees there are around a dozen to two dozen skills you can buy and equip with points as you level up, allowing you to specialise into the character you want to be, whether that is a melee-focused hunk or a technology-based Net Runner hacking into cameras and security systems.

So far I have also seen some of the more unique aspects of Cyberpunk’s world such as the Braindance feature which is truly fascinating, allowing you to get a window into situations you never would have thought of being a part of, scanning the environment, analysing heat and sound to find clues and solve a mystery. Jumping into it with Judy was one of the most exciting parts of the game and I am hoping there is a lot more of it in the story.

There is even cumulative tracking in Cyberpunk 2077 of stats like Athletics and Proficiency with a particular type of weapon, which will slowly rank up and offer bonuses as you do more of the action, similar to Crackdown, which is a nice touch.

I am not far enough in to get a proper impression of how the RPG systems work, but right now the action elements, combat, and gameplay are all strong and compliment the world and storytelling well.

PS5 Performance Is Good, PS4 Gameplay Looks Horrific, Along With Bugs On Both Platforms

The majority of my time with Cyberpunk was spent on PS5, playing the game through backwards compatibility, where the game is set to 60 frames-per-second. And, on PS5 the game runs surprisingly well and looks gorgeous. Lighting is excellent and the world pops in a way you would want from a cityscape like this. The game also holds at a nice and steady 60 FPS, but there are small drops, although it is nothing major.

However, let’s talk about PS4. Before we start, I played on a launch model PS4 and I didn’t get the chance to test PS4 Pro as I don’t have access to one. But, my god, does the PS4 version look like an absolute pile of trash. The graphical downgrades here are significant and make the game almost impossible to play. I don’t have the sharp eye or the technology to find out, but I can’t imagine the game is running at 1080p. It might not even be at 720p. Draw Distance is incredibly short and the entire screen has the muddy smeared look I mentioned above, with this only being exacerbated in combat sequences and high-intensity action.

I struggled to make out targets 30 meters away from me on PS4 and explosions, gunfire, and all the effects that are in the game blur that screen even more effectively meaning you just aim at the red icon and hope for the best. Sure, it is playable if you really want to, but it is not enjoyable.

Surprisingly, PS4 load times aren’t too bad, but certain aspects of the game load slow, such as the menus to get access to your inventory and gear. Also, the drop from up to 60 FPS on PS5 to 30 FPS on PS4 makes these issues way worse and the game won’t even hold that 30 FPS, dropping to the 20s during explosions and sudden action in combat.

The state of the PS4 version is pretty dire and it makes me wonder if the game ever looked or ran well at all on the console, because with so much toned down and so many restrictions in place I don’t see how you can make this game perform any better.

As for bugs, I am pleased to say that I have not run into any major ones yet and the patches pre-launch seem to have fixed a lot of issues. However, there are still a few small bugs such as objects floating in the air, a gun clipping through someone’s skull, and some other visual glitches, such as when I had to reload my save as the environment flashed blue every 5 seconds. But other than that, everything has been smooth. I did have one crash, although this didn’t repeat itself when I played the gameplay section and I haven’t had a crash again.

Right now, from what we have played of Cyberpunk 2077, its world and characters are its strongest asset, with a captivating main cast and side characters and quests with funny and enjoyable narratives. Combat is polished and works well, with a lot of customization and options to choose from and customise your character with. However, those playing on a base PS4 are going to struggle to find any kind of enjoyment in the game due to the blurry visuals, framerate drops and muddly look the game has, But, on PS5, those issues are virtually non-existent. Cyberpunk is looking promising and I hope I get more captivated by its world in the tens of hours I have left to spend with it.