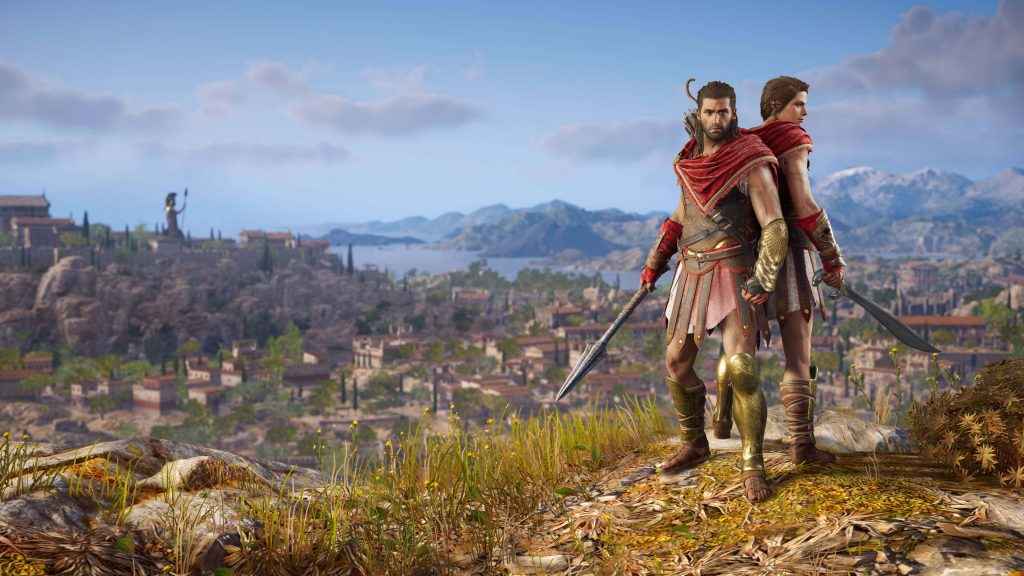 If there's one thing creative director Jonathan Dumont really wanted those who caught Ubisoft's E3 presentation to know, it's that Assassin's Creed Odyssey is a fully-fledged RPG.

He said as much on a number of occasions throughout the 15-minute long presentation - not that we needed him to, mind. The ensuing gameplay segments made that abundantly clear, giving excited fans plenty of tantalising information about almost every aspect of the game and reaffirming me in my belief that a more accurate name for Ubisoft's latest historical stab fest would have been Assassin's Creed: Wild Hunt or The Witcher 4: Ancient Greece.

Assassin's Creed Odyssey give you even more choice

The game's very premise smacks of a traditional RPG.

Set against the backdrop of the Peloponnesian war of the mid-late 5th century BCE, Assassin's Creed Odyssey puts the player in the shoes of either Kassandra or Alexios: a Spartan mercenary and outcast who, wielding the blade of his/her grandfather - the legendary Spartan king Leonidas - sets out on a quest to save his/her loved ones and “become the legendary hero Greece needs”. We all know the drill by now.

Anyway, it's not just the gender of our silver-tongued hero we get to choose. Over the course of our journey across the preposterously beautiful and diverse landscapes of classical Greece, we're free to mould the personality of Kassandra/Alexios in whatever ways we see fit; using none other than Odyssey's version of the tried and tested dialogue wheel.

Interacting with the world of Assassin's Creed Odyssey Closer in style to The Witcher 3 than Mass Effect, if the brief excerpts of gameplay exhibited at E3 are anything to go by, players can choose between a handful of responses during many of the game's undoubtedly frequent NPC interactions, each of which shape Kassandra/Alexios' characters in different ways. Less considerate players might choose to charge desperate quest givers an exorbitant fee for their services, for example, giving their bank balances a healthy boost at the cost of some moral integrity. Similarly, while some might prefer brutal honesty when dealing with their fellow citizens, others might attempt to spare the concerned party's feelings, if at all possible.

Naturally, this will colour how NPCs feel about Kassandra/Alexios, however, Ubisoft has also hinted at the possibility that these decisions, no matter how small, have the potential to affect other interactions further down the line. As Socrates says during a brief conversation with Kassandra during the E3 demonstration: “Our choices are like ripples on water. They seem tiny and insignificant at the beginning, but they can become devastating tidal waves by the time they run their course”. Although, if I'm being totally honest, I doubt if these decisions will leave much of an impact when all's said and done.

Regardless, one thing that will have an interesting if not particularly significant effect on the story as it unfolds is the ability to ‘romance' NPCS (read have sex with every available partner) for the first time in Assassin's Creed history. Increasing the feeling of immersion and sense of agency that makes gaming such a unique and engrossing pastime.

Ubisoft hasn't only changed the way it tells stories in Assassin's Creed Odyssey, however. Combat and progression have been updated too, building on the foundations of Origins to bring the game and the series itself going forward more in line with the likes of The Witcher 3 or Dragon Age.

As far as combat's concerned, Odyssey retains many of the features that made Origins such a breath of fresh air for the series: the real-time, quasi-hack ‘n' slash style; a prodigious arsenal of weapons and armour; and more supporting abilities than you can shake a stick at. The biggest difference, based on what we've seen so far, is that the overall speed of combat has been decreased ever so slightly to provide a more tactical, almost cinematic experience.

The progression system also sticks closely to the successful blueprint laid down by Origins, adding only a few supplementary features here and there to streamline the experience. Players can now equip a handful of abilities (including the ‘Spartan Kick' we saw in the E3 teaser trailer) to a Dragon Age-style hotbar located at the bottom left of the HUD, for example, while the iconic hidden blade has, seemingly, been replaced by the Spear of Leonidas: a versatile weapon that offers close-quarters, stealth, and ranged combat opportunities, and thus presumably functions as the go-to tool for dispatching enemies quickly and quietly. All things being equal, Assassin's Creed Odyssey is set to launch on the 5th October 2018 for PS4, Xbox One, and PC, with no word on a Switch port announced as yet (which is hardly surprising, given that AC: Origins isn't even available on the handheld-home console hybrid at the time of writing).

There's a standard version that can be pre-ordered right now, however, as with all AAA releases these days, there're a bevy of special editions brimming with Assassin's Creed Odyssey merch if the game alone isn't enough to quench your thirst for historically-themed wetwork.