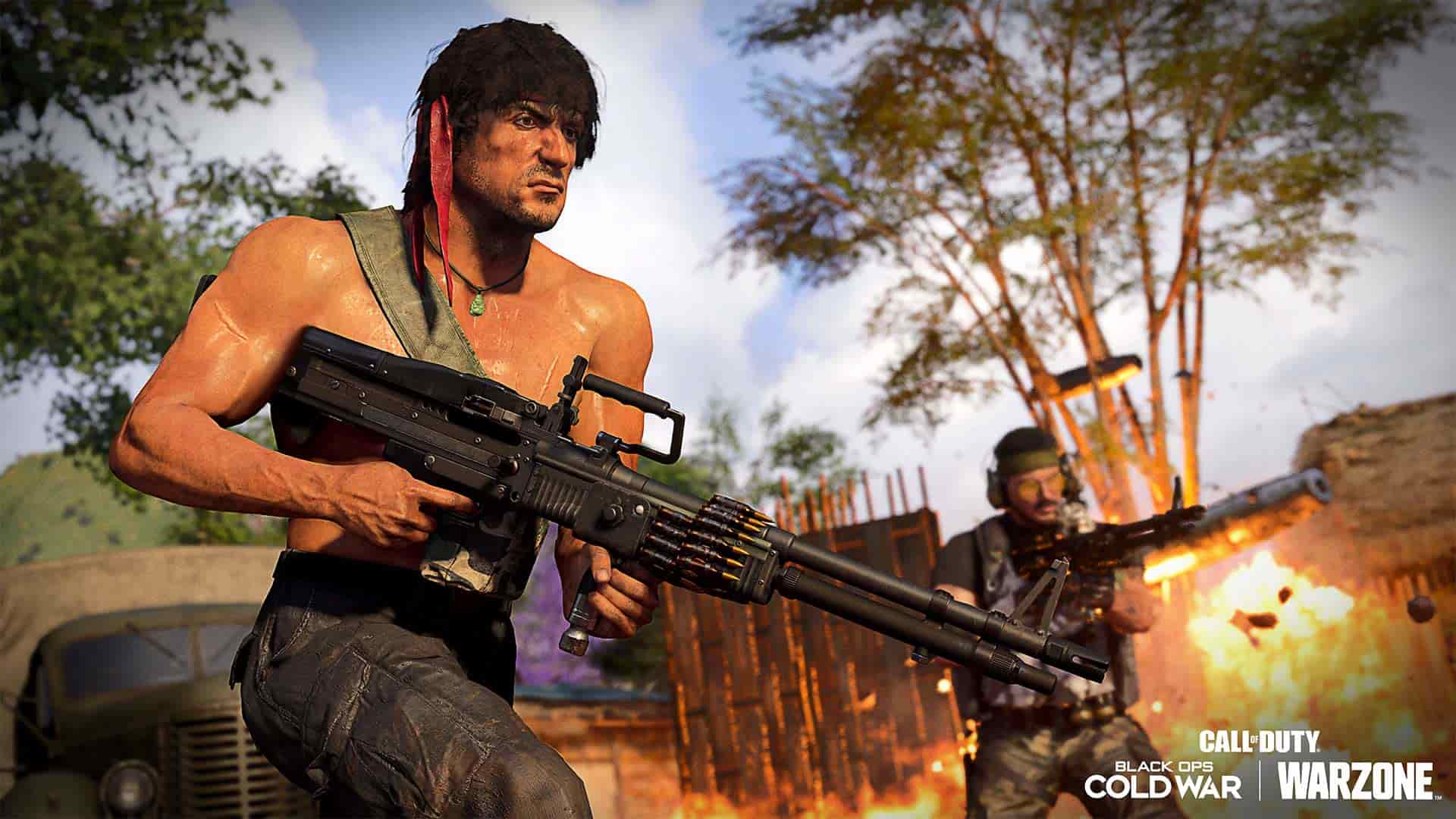 Activision has lifted the wraps off the Call of Duty Warzone update 1.37 patch notes, which is now live to download for PS4, PC and Xbox One. The update is pretty major, adding 80s action icons John McClane and John Rambo, plus a new mode called Power Grab.

Read up on the latest Call of Duty Warzone patch notes below.

Two sets of nine challenges and rewards are available across Black Ops Cold War and Warzone during the ‘80s Action Heroes event starting May 20th.

What if we dialed up the intensity of Warzone to true Hollywood extremes? In Power Grab, you must eliminate other Operators, complete Contracts, and loot Supply Boxes around Verdansk to find Dog Tags. By collecting Dog Tags, you will work your way up a reward ladder that will give you the edge you need to win, including the personal Respawn Token. You’ll have to use everything you’ve got to control the flag that spawns during the final circle – calling in an Exfil Helicopter. True to the BR experience, you can also choose to hunt every single other Operator until you‘re the last one standing. There are fewer and smaller circles. There are no loadouts. There is no Gulag. But there will be action… and plenty of it!

The headquarters of the Nakatomi Corporation have moved from sunny Los Angeles to Verdansk’s Downtown for a limited time.

Around Verdansk, numerous campsites have been converted into Survival Camps as a homage to Rambo: First Blood Part II.

One of the aircraft hangars in Verdansk’s northwest sector has been converted into a makeshift CIA Outpost, as these agents need a home base to start tracking down the elusive Rambo.

Customize your Weapon by borrowing Attachments from multiple Blueprint variants. You can swap the appearance of Weapon Attachments to feature elements from all of your unlocked Blueprints.

Stickers & Charms exclusive to either BOCW or MW will only be usable on their respective Weapons.

Stopping Power Field Upgrade spawn rates have been reduced substantially across all modes.

Given Stopping Power’s efficacy and lack of counter play options, we felt its power level was at odds with its availability. We want to create more scenarios where a measured choice about how and when to utilize Field Upgrades is not just rewarded but encouraged. There was hardly an incorrect way to apply Stopping Power—which we felt took away from the satisfaction of optimal or strategic use. Our hope by drastically reducing its presence within Warzone is that we introduce a small strategy-based control. Those who loot efficiently increase their odds of finding it.

We will also be making an important adjustment to the Solo BR modes in the very near future. Keep an eye out on Twitter for more. 👀

Fixed additional map locations in Verdansk that allowed players to reach out-of-bounds areas. This is on top of the locations that we addressed in the last 2 patches.

Fixed an issue that caused the Gas Mask to become unbreakable after a players’ first death with the Gas Mask equipped.

Fixed a bug that caused player Activision IDs to not always appear in the killcam or when spectating with or without the Option enabled.

Fixed an issue where Loadout Drops would fall through salt pools in the Salt Mines.

Fixed an issue where Sparks was not visible in the Operator Select Menu until the Sparks Operator Bundle was purchased.

Fixed a bug with the LW3 – Tundra where firing the final shot in a magazine would displace the Weapon model.

Fixed a bug with the Great Pacific Blueprint where its Weapon stats were incorrect.

Fixed a bug with the Swiss K31 where it would deal lethal damage in a single upper body shot when loaded with Stopping Power.

Fixed a bug with the Bullfrog where it was receiving an unintended amount of Bullet Velocity.

Fixed a bug with the CARV.2 where some of its barrels were not assigning the correct values.

Most nonverbal sounds are now called out in subtitles in [] brackets.

This will apply to all new Operators moving forward starting with Rambo and McClane.

This menu provides a pared-down list of settings which are specifically oriented towards accessibility.

Core to our philosophy is ensuring all players across a broad spectrum of ability and disability are able to play and enjoy our content. The addition of the Accessibility Options menu supports this vision by bringing more visibility to the available options while increasing ease-of-access. More information on Warzone’s accessibility features can be found on the Warzone Accessibility FAQ.

Built for stealth kills from multiple distances, this versatile Weapon allows for melee attacks up close and a projectile blade attack from short-to-medium ranges.

Expect this Weapon to output high amounts of damage in a short period of time thanks to its full-auto nature, which makes it highly effective in close quarters.

Neck multiplier increased from 1 to 1.4

Sprint to Fire Speed increased by 20%

The AK-74u’s stats were well beyond what one might expect from a Submachine Gun. We are reining it back in line with other Weapons in its class—less Bullet Velocity, less Damage Range, and more Sprint to Fire Speed. While some of these changes may make it seem like the AK-74u had received a drastic reduction in efficacy, we believe these stats are not as meaningful to the SMG class when compared to handling and Time to Kill. With unparalleled maximum damage, locational multipliers, and an unforgiving rate of fire, the AK-74u is now the epitome of high-risk, high-reward SMGs.

Maximum damage increased from 27 to 28

We believe the PPSh-41 is on the brink of being able to contest some of the strongest Submachine Guns. This damage bump will undoubtedly have the PPSh-41 joining other high tier SMGs as a contender for that top spot.

All Black Ops Cold War Sniper base optics have been adjusted.

Extremity multipliers increased from .9 to 1

We have found that the Sniper Rifle Charlie feels much more satisfying to use as a heavier duty semi-auto Sniper. We will continue to push it in this direction until we strike a satisfactory balance between its identity and efficacy.

Snipers like the Swiss K31 excel at aggressive, mid to long-range play. However, its poor Flinch Resistance overshadowed and played counter to some of its other great qualities. These changes in conjunction with the adjustments to Sniper Attachments will make Swiss K31 feel a lot more like the lightweight, fast-handling, high-skill Weapon it was meant to be.

Upper Torso multiplier increased from 1.25 to 1.7

Lower Torso multiplier increased from 1.15 to 1.25

Extremity multipliers increased from .9 to 1

The feel of a Weapon is important to us and the ZRG 20mm, while fun, was not quite where we wanted it. We are doubling down on its identity as the highest caliber Sniper in Verdansk. We want you to really feel like you are firing anti-materiel rounds. In order to achieve this, we made the Weapon ‘heavier’ and increased its Bullet Penetration. Now players on the receiving end of the ZRG 20mm will need to consider the width of objects that they use for cover. We find this gets both the wielder and their opponent to think about the game in different and interesting ways—which is something we always aim to promote.

We expect this relatively unassuming change to have widespread effects. The Suppressor now offers you another viable attachment choice in the muzzle category with a focus on different stats. For example, where Effective Damage Range is less of a priority (e.g., Submachine Guns) you would almost certainly take the Suppressor. Or perhaps you have more than enough Bullet Velocity (e.g., ZRG 20mm) and you want to shore up a weakness in handling. These are the types of compelling decisions we want to continue to develop.

Generally, we are pleased with the level of Weapon diversity we have observed. As we look forward, at the top of our list is the look and feel of Black Ops Cold War optics in Warzone. We think some additional adjustments there will continue to push Weapon diversity even further. Additionally, we will be continuing our efforts in identifying and addressing attachment categories that do not support meaningful exploration and build diversity.

This Operator will be available via the “Rambo” bundle in the Black Ops Cold War and Warzone Store from May 19 at 9PM PT to June 18 at 9PM PT. This bundle includes the Legendary Operator; two Finishing Moves, including one using his signature bow and arrow; three Legendary Weapon Blueprints—an Assault Rifle, an LMG and a Knife Blueprint; a Legendary Calling Card and Emblem; and an Epic Watch and Charm.

“To survive a war, you gotta become war.”

John McClane will be available via the “Die Hard” bundle in the Black Ops Cold War and Warzone Store from May 19 at 9PM PT to June 18 at 9PM PT. This bundle includes the Legendary Operator, a Finishing Move, three Legendary Weapon Blueprints—one tactical rifle, one SMG, and one Assault Rifle—a Legendary Calling Card and Emblem, an Epic Watch, and an Epic Weapon Charm.

“Welcome to the party, pal!”

Note: Rambo and John McClane are brand-new Call of Duty Operators; these are not skins for previously released Operators.