At the forefront of the content are two distinctly-new modes: ‘Survival’ and ‘Demolition’; the former plays exactly like an endless mode, retaining the addictive gameplay whilst alternating scoring mechanics as well as giving the little green humans parachutes. Atop of that, a day-and-night cycle has been introduced which changes the game aesthetics as well as acting as a visual cue to show you just how far you’ve gotten.

Demolition, however, is an entirely different kettle of fish – elevating Resogun’s core mechanics to a new height. Billed as ‘Resogun meets Arkanoid’, players take charge of a wrecking ball and wreak havoc on maps, destroying anything in their paths, whilst at the same time trying to maintain survival without any boost, overdrive or bombs.

‘’Demolition has you watching out for not only the enemies coming at you, but also the chaotic bombardment of the unpredictable main weapon in the mode. You will die a lot, it will be insanely fun and I cannot wait to see people throwing their controllers around’’, said Housemarque’s Mikael Haveri. 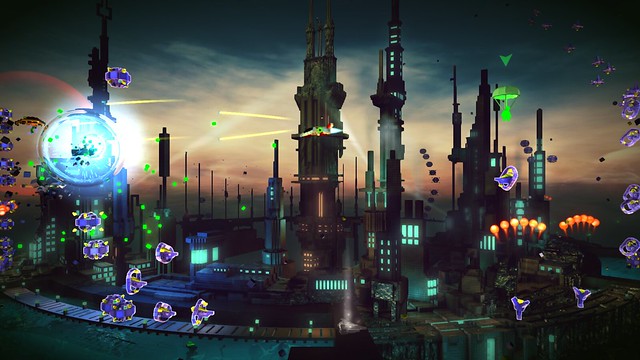 Alongside all the fixes and tweaks included, owners of Resogun will also receive a co-op mode and a ship editor absolutely free. The patch will be hitting PS4 on June 23, with the Heroes expansion following the next day and priced at $4.99.

‘’Future expansions will add yet more game modes, along with a range of other content, additional Trophies, and the original soundtrack. The season pass is attractively priced at a lowly $7.99, which is simply a steal to ensure you have the full, definitive RESOGUN experience’’, concluded Haveri.

Give your thoughts below and tell us if you’ll be picking up the expansion when it goes live.