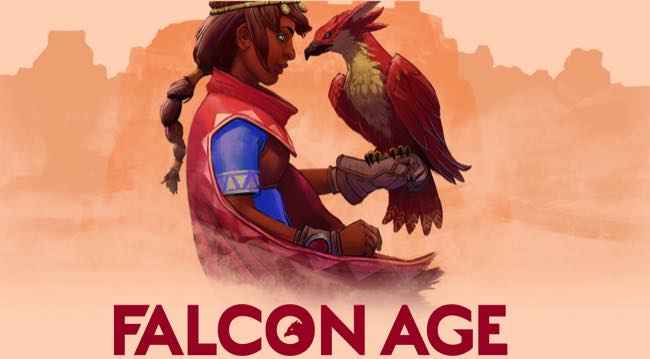 Let’s be honest, everyone wants to raise and train a falcon. With Falcon Age, you will finally have that chance. You can relive the trauma you had as a child when you first watched Kes. This very interesting upcoming title has you raising a falcon, farming and battling colonizing robots. What’s not to like? Take in all the falconry goodness below.

There are some hilarious gifs on the internet for this game. It looks cute, hilarious and like nothing else on PlayStation. There are gifs including fist bumps, tricks, dancing and a whole myriad of falcon shenanigans. Just browse down the Outerloop games Twitter feed to see some incredible videos and gifs on the subject.

Machine invaders have ravaged your planet. All resources have been consumed, all culture destroyed and your planet is slowly dying. You play as Ara, who has been wrongfully thrown in jail for a minor infringement. To pass the time you befriend a falcon and await your fate. Together they eventually escape and set off on an adventure to help the resistance and drive back the cyborg hordes.

To VR or not to VR, That is the Question?

This quirky title is playable on both PS4 and PSVR. This is great and very welcomed news. It means you have all sorts of falcon mischief whether you have a PSVR headset or not. We do think however that the best experience will be in VR. The devs have gone to great lengths testing and developing the VR side of the game. As shown in the dev video below a plethora of VR options are available. It’s nice to see the VR side of the game getting a lot of love.

Are you looking forward to raising your own little falcon? Will you be playing in VR or on a normal screen? Fly into the comments below.