Final Fantasy XIV: Stormblood provides a wealth of content worthy of a standalone RPG title and a whirlwind of changes set to revolutionise its current game mechanics; paving the way for Final Fantasy XIV’s future content.

Somewhere in what appeared to be Hamburg’s ‘little Japan’, we had the chance to take a look at some of the new content in action. The basic lowdown?


Get all that? Well we’re just barely scratching the surface here. 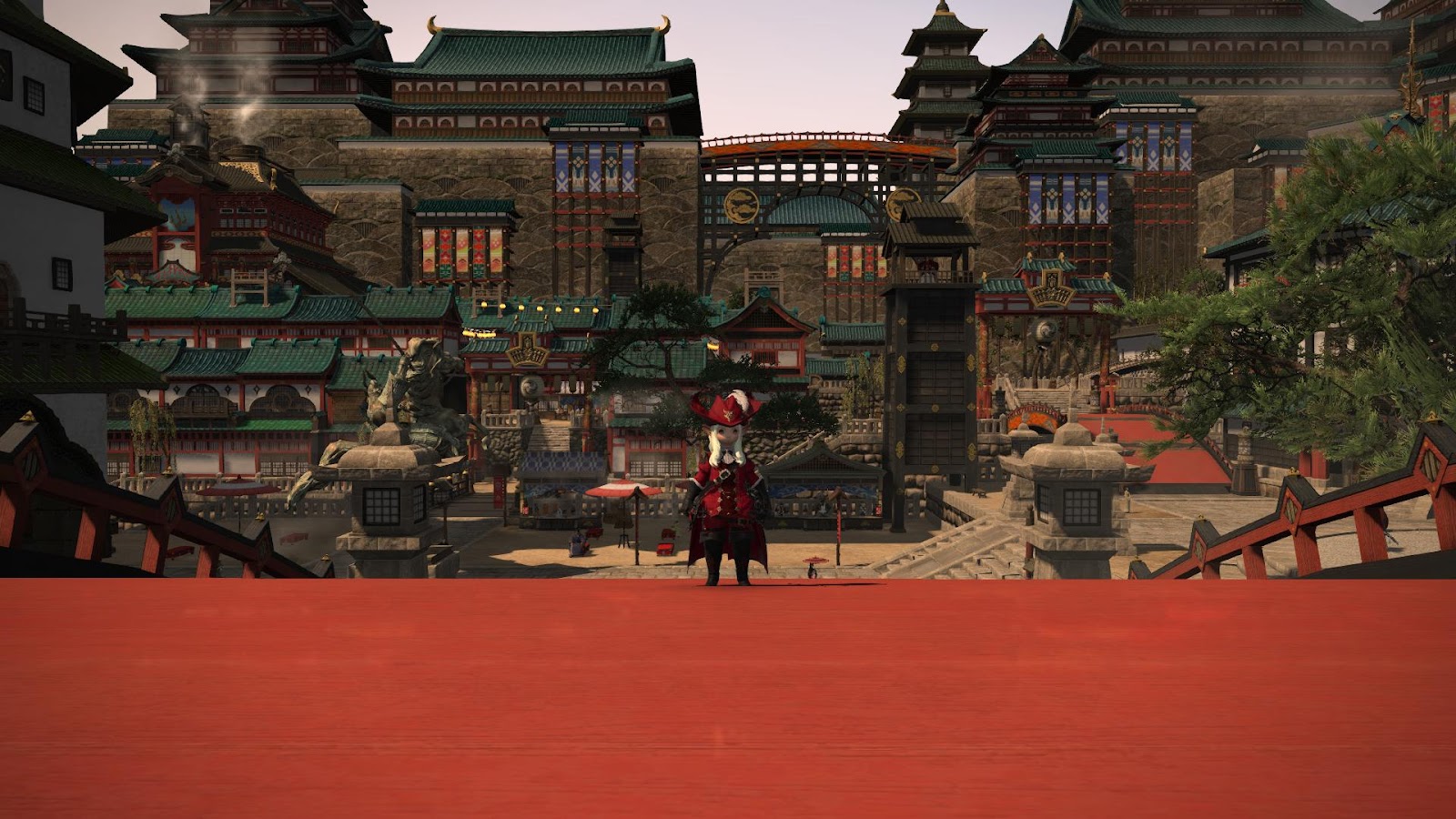 So, where are we headed in Stormblood? During the preview we had a chance to visit a slice of Stormblood’s Far Eastern regions including: Hingashi’s port city Kugane, The Ruby Sea, and Gyr Abania. Situated by the Ruby Sea is Othard, which we didn’t see a great deal of. We know at least that the Dungeon battle areas extend to Othard, as you prepare to go up against the Garlean Empire. Square Enix doesn’t disappoint with its attention to detail and visual aesthetics; looking first to Kugane and its stunning Far Eastern vistas, followed by the precipitous Peaks of Gyr Abania and The shimmering Ruby Sea. The Ruby Sea allowed us to try out swimming which, likely due to a myriad of locked off areas, was a little bland and uninteresting aside from the large bubble containing some members of the Kojin – think, gnarlier Teenage Mutant Ninja Turtles. Looking at the preview Dungeon ‘Shisui of the Violet Tides’ from our Lalafell’s perspective, well, maybe not as low down, but you catch my drift. In between being affectionately(?) teased as a walking potato throughout, running the level 63 dungeon as a light party of four with varying player experience, proved to be a fun romp through the underwater Raen palace. A once peaceful underwater locale, erected to seek peace from the wars on land. It’s not so peaceful anymore. Confronted by demons with soul seduction on the brain, the most memorable mechanic here involved avoiding seduction by diving into a treasure chest and emerging as a withered crone. Whether octogenarians are immune to seduction generally, I am uncertain, but I guess this delightful creature wasn’t their type. Turning into a crone made little difference to potato Lalafell, most people shrunk. She, did not. The big boss, Shisui, was also a real feast for the eyes with an overactive stomach that couldn’t keep its opinions to itself, or much else for that matter.

The majority of changes in Stormblood focus on accessibility, usability, and solidifying the future of the MMO on PC and PlayStation 4. From its Battle System to PvP Changes and the introduction of Scenario and Job level boosts, in order to level the playing field and bridge the gap between new and veteran players; Stormblood is a whirlwind ready to take Final Fantasy XIV by storm.

What do Stormblood’s changes mean to you the PS4 gamer?
The ease of use for the console is a primary focus in Stormblood, remaining true to Final Fantasy’s console dominated past. For example, with Job Action adjustments the aim is to de-clutter your hotbars, alleviating stress for console and PC users alike. For example the White Mage’s Stone spell will consolidate with each upgrade (Stone II – Stone III – Stone IV) into one action slot. This significantly reduces said controller faff and provides the opportunity to engage more fully in combat. 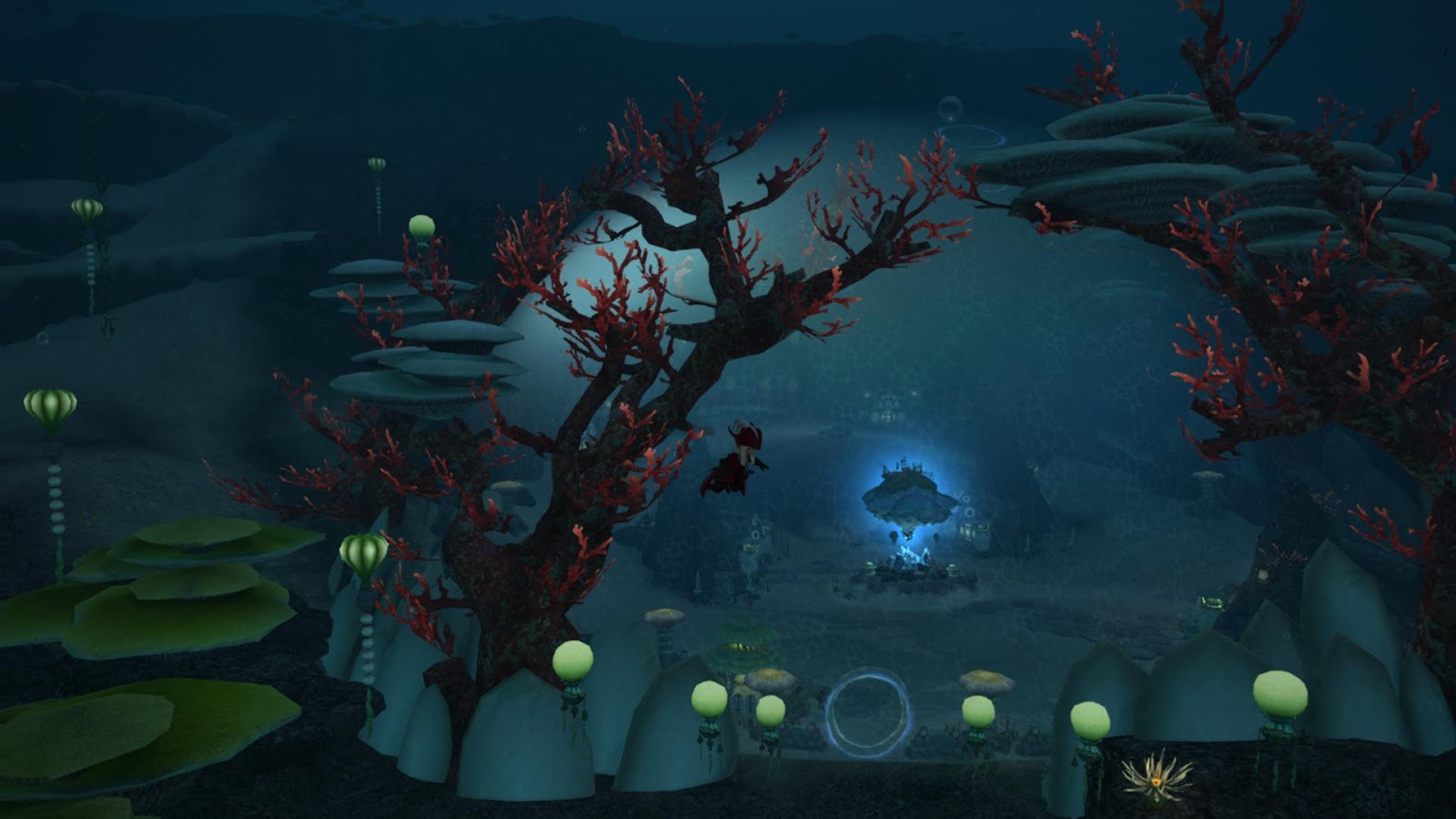 With strong new foundations to maintain a balance of accessibility between console and PC, Final Fantasy XIV manages to achieve a less than simple task when it comes to MMO compatibility. World of Warcraft is an MMO which would never make the translation to console, largely due to a strong rooted PC MMO community. We discussed this with Producer/Director Naoki Yoshida and how the console dominated Final Fantasy community as a whole, make this accessibility and flexible gameplay possible:

“Of course, yes, I think (the Final Fantasy community as a whole) did help”, said Yoshida. "The reason why we continue to provide support for those who want to play an MMO using a gamepad, is that Final Fantasy XIV is a part of the Final Fantasy series. We believe that the console platform is a strong part of the series and our hope is that those players, who have been playing Final Fantasy titles, can enjoy Final Fantasy XIV as well.
That’s another reason why we have the number in the title, to show that we are a part of that family. So we do want to continue providing support for players that are on the console as much as we can, and we do not want to have a disparity between those who play on a PC platform. So that is not only important but should come as second nature to us.” 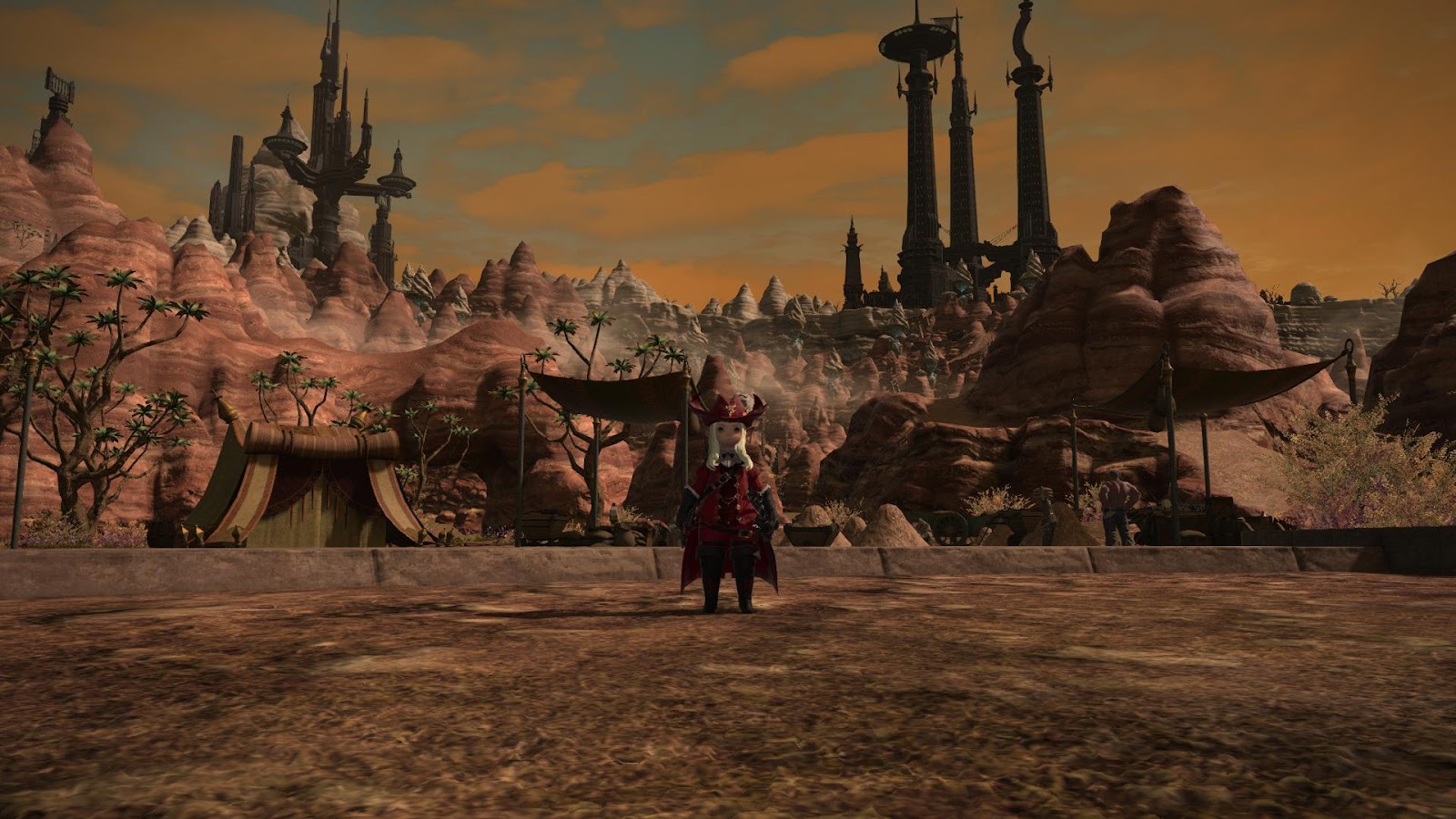 Our Lalafell spent a lot of time as the new Job, Red Mage, which is the most balanced class available and Final Fantasy XIV’s first hybrid, utilising caster and melee abilities. During this time she took the opportunity to get to grips with some of the new features in action, such as Stormblood’s introduction of Job Gauges.

The new heads-up displays (HUD) are unique to each Job and their actions, so, the Red Mage has the Balance Gauge to show your balance between black and white mana. Once your combined mana reaches a particular amount the gem at the top of the gauge will glow red, proccing Weapon skills for extra damage and activating more powerful abilities in your rotation. If you are unbalanced and have too much black mana for example (or vice versa), the gem in your Gauge will become black to reflect this tipping of the scales and you’ll need to master your rotation to reset this. The idea behind the introduction of Job Gauges to is to reduce, and hopefully remove, extreme DPS disparity between numerically focussed players and those that would benefit from more visual cues. While learning the ways of the Red Mage these Gauges proved to be very effective for knowing what state you are in with your current stance, if you are playing your job type correctly, and should prove successful in closing the disparity gap between players. 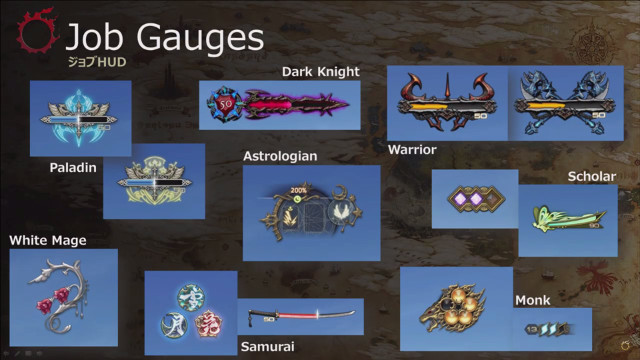 Final Fantasy XIV: Stormblood – Where to start for newcomers

Hey, i’m new! what’s in it for me? Well lookee here, we have Scenario Shortcut items and Job Level Boost items. What does that mean? Well, the Scenario Level Boost items will complete all of the main scenario quests up until its respective patch. You can opt to complete A Realm Reborn, or stretch all the way to the completion of the previous expansion, Heavensward. Featuring your very own Chocobo and The Unending Journey, which contains all of the cutscenes from the story thus far, to get you up to speed.

Available on the Mog Station from June 16th:

The Job Level Boost? This raises the level of a single job, via a job specific Tale of Adventure account collectable. This raises your chosen Job to level 60: White Mage, Dragoon, Summoner, Warrior, or whatever takes your fancy. Granting you a full set of level 60 gear, completed Job quests, all actions learned, and access to the Hall of the Novice. Available on the Mog station from June 16th, priced at: $25.00, £18.50, €21.75 per Job. This doesn’t apply to the new Jobs, Red Mage and Samurai. 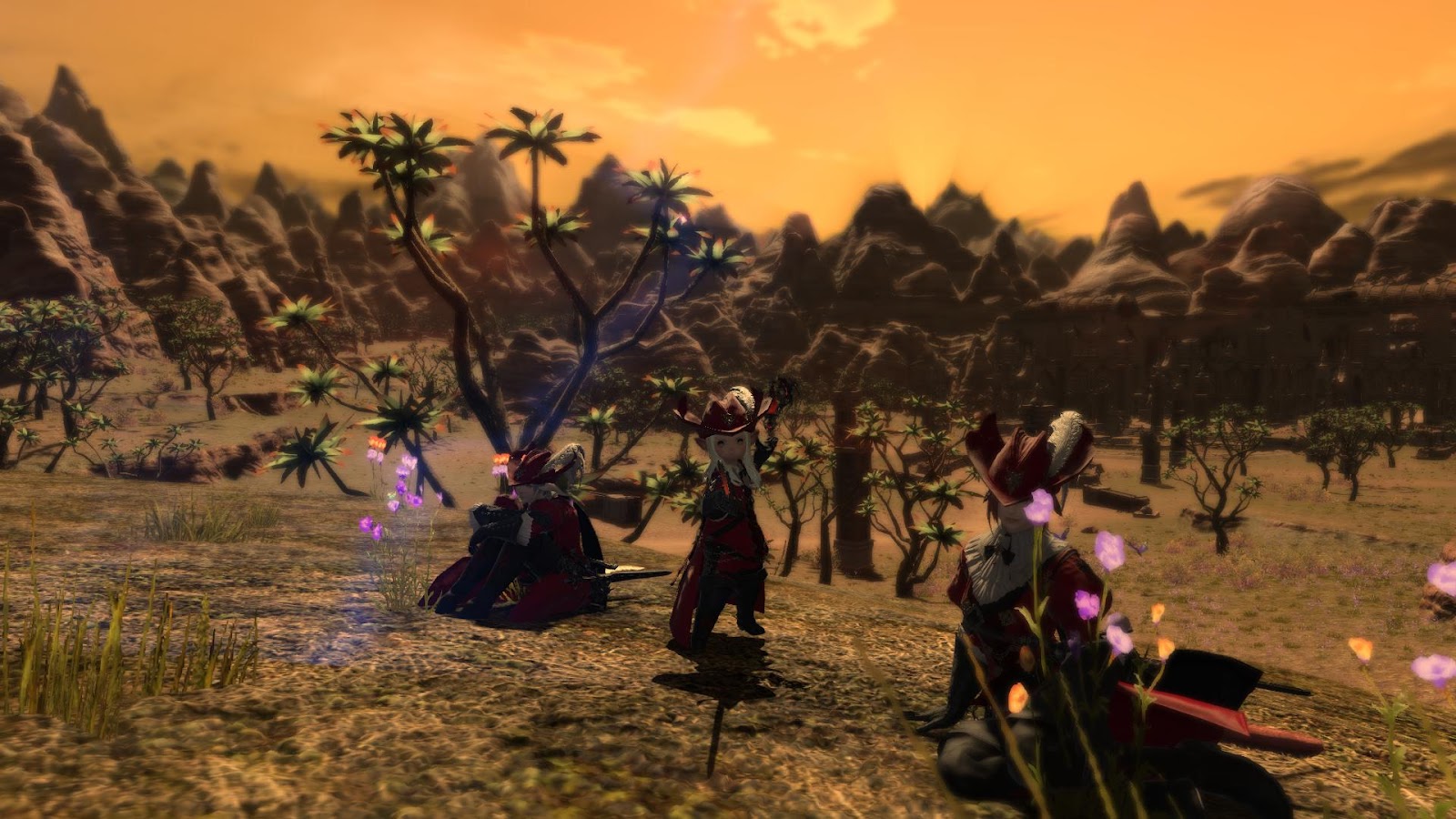 The issue here is that when you combine this together, you are looking at a hefty investment. Purchasing the scenario boost alone doesn’t level up your Job, hence purchasable Job Boosts.  So depending on what you want to start with, let’s say, Heavensward and two Jobs you’re looking at £55.50 as a starting point. This is unfortunate, as what Stormblood brings to Final Fantasy XIV is very appealing to a) someone who wants to make their first foray into MMO’s and b) caters to a wide range of playstyles and is more forgiving on the casual player – not only the gameplay, but also the within the community. Naoki Yoshida did state that they don’t want to saturate the game with new players all starting at level 60, but to make sure that this service is provided to those who are willing to pay the price to buddy up with friends and family straight away. Putting a price tag on it as a way to intentionally regulate the flow to an extent. Time will tell how this works on launch, with games such as World of Warcraft not charging for a one off character boost, above purchasing the expansion. However these boosts have caused a great deal of disparity and contempt in the past between new and veteran players – so the price point is a hope to avoid these issues.

Tell us what you think of Stormblood? Are you happy with the direction it’s taking? What do you think of the cost as a new player? Let us know in the comments below!