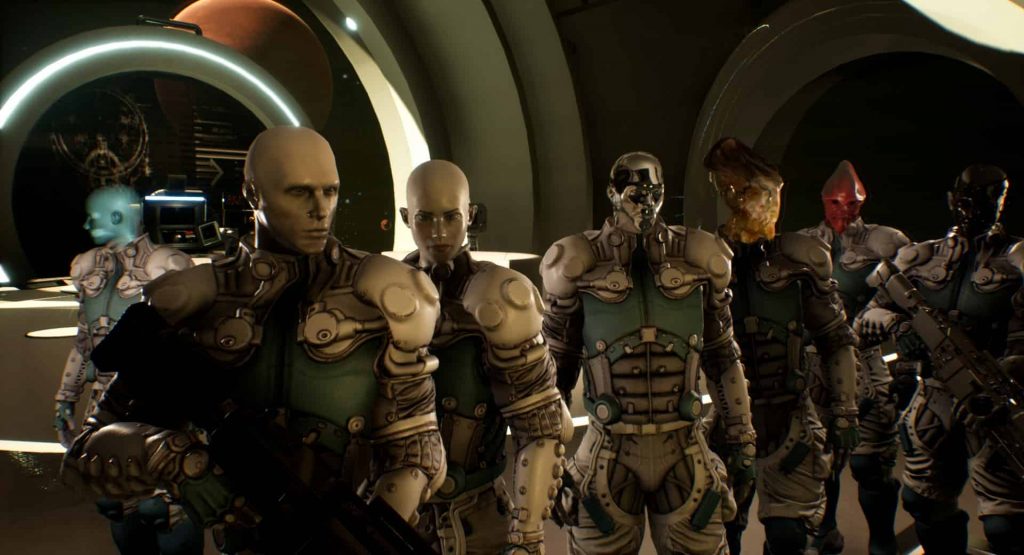 Trying to find a suitably habitable planet in the big, wide cosmos of Genesis Alpha One is no easy task. Indeed, early on it is entirely all-too easy to screw things up with the end result being a destroyed ship full of charred corpses and destroyed hope that casually drifts into the gravitational pull of the nearest gas giant.

Genesis Alpha One Guide – Tips on how to get started

So, with that in mind, we have imparted a whole bunch of tips based from our own painful experiences and failings in the hope that you too don’t mess up like we did in the early going, and can instead get your Genesis planet finding expedition off to a super-solid start.

Here. We. Go! (in no particular order)

When you’re hurriedly building your ship, it can too simple to fail to plan for the future. This is in large part because the energy that need to use to build the various corridors and functional units in your ship can run out before you know it. As such, it’s always best to think ahead and chiefly think “Do I have enough energy left to build what I need to, and enough free space in the direction that I want to build it in?

When things go south and your ship is teeming with hostiles, it can be nightmare to contain the onslaught. Because of this, the best way to keep the fight on your terms is to dictate where it can happen, and most importantly, the best places to martial your arsenal against the threat. As such, this is where automated turrets and shields come in – as you should position a shield with a turret in front of it to create effective choke points that allow you to dictate where the fight takes place. Putting turret/shield combos in front of ship-critical areas such as your reactor, isn’t a bad idea either if you have the resources to spare (3 Lithium for shields and 3 Sulfur for turrets).

Make sure your tractor beam room is totally secure

In the early going of Genesis Alpha One, the tractor beam room is the primary avenue by which enemy hostiles can enter your vessel, as these aggressive xenomorphs will sometimes piggyback their way into your ship on the back of an incoming chunk of ore. You can however, be prepared for this by positioning at least two turrets which aim towards the center of the tractor beam room.

Don’t forget also – the tractor beam itself stretches from the ceiling to under the floor too. So this means when you’re positioning turrets and shields to establish perimeters, make sure you cover both underneath the room, and any exits out of it, as enemies can sometimes be beamed directly beneath the floor.

Look out for signs of infestation

It can be easy to miss the signs that mark the beginning of a ship-wide infestation, but in the early going it all typically begins the same way. First appearing as a rusty red fungal growth that slowly expands into a bulbous, dull green, you should immediately exterminate these growths as soon as you see them, lest the manifest into eggs which hatch and then, yeah, you know the rest.

Be aware also – the motion sensors on your turrets will not pick up these growths – so where you find one growth, you’ll likely find more; so be sure to do a thorough search of any adjoining areas to an infected room (and that includes under the floor!). One last thing, just to make sure the infestation doesn’t hide in the dark, click the R3 button to activate your flashlight so you can spot the horrible things better.

Keep a stockpile of ammo

Mowing down aliens on both your ship and on planets is a draining business, and no more is that drain apparent than on your ammo reserves. As a result then, to avoid getting caught with your pants down ammo-wise, make sure you have a decent stockpile of the stuff that is easily accessible (Lithium is your mineral for constructing ammo boxes). Also don’t forget, on some planet surfaces, you can find ammo boxes either on the corpses of armed enemies, or, just laying around in the wild – so keep an eye out!

Build a refinery as soon as you can

There’s not much point in going down to a planet to harvest ore and other precious minerals if you can’t refine them into something usable – this is why you need to make yourself a refinery as soon as possible because if you don’t, you’ll just have piles of the stuff sat around doing nothing. Bear in mind that tractor beaming ore aboard puts those materials directly in storage (something we’ll get onto in a bit), so anything you get from the tractor beam does not need to be refined.

Make sure to use biomass to replenish your health

When you’re taking a kicking on either the planet surface or on your own ship, don’t forget you can interact with biomass screen terminals to replenish your health by simply holding down the L2 button (assuming you have a sufficient quantity of biomass on hand to use). Handily, if you’re on the surface of a planet and need to top up your health, all you need to do is run back inside the Harvester ship that you came down on and use the terminal in there. Sorted!

Prioritize the minerals you harvest

It is always important to prioritize the minerals that you’re harvesting for what you can actually use right now. Some mineral ores like Uranium aren’t essential early on as it’s used for longer range space travel that you won’t unlock until later in the game. Instead, focus more on materials like Iron which is used to build extra parts of your ship, Lithium which is used to construct shields and Sulfur which is needed to build turrets. Don’t forget – you can always return to previous locations to mine materials you have left behind.

Because alien DNA requires specific plants to survive in the ship’s biosphere (you can check what they each need at the main terminal in the cloning lab), you should always make sure that you’ve sourced and planted the right fauna that you need in order to support the crew that you have. This mentality becomes especially useful when you’ve discovered a Genesis planet that requires a particular species to breathe its atmosphere.

Make sure you have enough storage

Between harvesting minerals from planets and tractor beaming the stuff in, you’ll soon find that you’ll run out of space to hold any more materials. To avoid this, simply build more storage units – they’re small and can easily bolt onto numerous locations on your ship.

Keep an eye on your proximity sensor

Whether you’re out in the wilderness or fighting off an invasion on your own ship, keep one eye on the proximity sensor located on your right arm as this, along with a rhythmic and audible Aliens-style ping, will clue you in as to the direction that enemies will be coming from. One key thing to remember – the visual proximity sensor is not available when using the standard, infinite-ammo pistol.

Use each race to their fullest potential

Some alien races, such as the Kraul, have higher resistances and health, making them more suitable for combat and confrontation. Meanwhile, other races such as the Arachnoid are much more intelligent than your average Joe, and so are better used for completing engineering tasks and fixing broken energy nodes in your ship. For best results then, always make sure that you’ve got the right alien for the right job.

Make sure to check the dead of your enemy

Whenever you kill a foe, it’s always worth checking their remains for loot. More often than not enemies will drop precious biomass, which can be used to not only heal your clones, but help you produce new ones and research new DNA strains, too. Equally, if you’ve killed an enemy you’ve never seen before, it’s more important than ever to search their corpse, simply because new enemies tend to leave DNA and weapons samples behind that you can research yourself.

Make sure you help out with the chores

If you’ve got a longform activity on the go – such as tractor beaming a whole bunch of ore on board, you might want to speed it up if your crew are taking too long. Quite simply, the best way to do this is just to man one of the secondary consoles and hold down L2 until each job has been completed. Not only does this mean the work is done quicker, but if you’re in the tractor beam room and hostile lifeforms end up being beamed on board, you can keep an eye on those situations too.

Don’t be afraid to let your crew get sick

Diseases are a horrible thing, so it’s generally good practice to protect your crew against them as soon as possible and there’s only one real way to do that – let your crew get sick. That’s right, if you expose your crew to a disease and they start puking up their lungs, you can hoover up all the snot, vomit and other genetic material and then use it to create a cure. Just make sure, you’ve discovered how to construct a medical bay first, otherwise you won’t be curing much of anything.

Always investigate planets that have sites on them

In Genesis Alpha One, the main source of upgrades that you’ll get for your ship modules, suit and crew will invariably come from crash sites – and these can, in turn, be found on some planets when you scan them. As such, if you’re in a solar system that has crash sites, they are certainly worth investigating – at worst you could get a minor upgrade for suit, at best, you could get research plans for a whole new room on your ship.

Be aware of your harvester’s storage limit

When you’re on the surface of a planet harvesting ore, you need to mindful of the storage limit that your harvester craft has (the default is 5). Bear in mind too, that plants are also included in this storage allowance. As such, you should look to harvest materials that you know you can put to use straight away – such as Sulfur for turrets, Iron for constructing a new ship module and so on.

An obvious tip this, but one which is easily forgotten. If you’re in need of specific materials or sites to visit, you can access the galaxy map from the navigation computer on the bridge to filter what you need from the solar systems available and then chart a course to get there. Happy days.

Assign crew to the refinery as soon as you can

With repeated planetary harvest runs in just a single solar system you can bring back an awful lot of minerals and other materials. As a result, it really pays to have a full staff working in the refinery to ensure that all that lovely stuff gets refined for use as soon as possible. Additionally, don’t forget that you can prioritize which materials are refined first.

Be careful with deconstruction

Should you decide that you want to deconstruct a ship module for whatever reason, be mindful of the fact that not only will you will lose whatever was in that corridor (deployed shields, guns etc.) but also be knowledgeable about what other functions of that ship are dependent on that module. Destroying a reactor which supplies power to other ship modules will cause those modules to cease functioning, for example.

Published by Team 17 and developed by Radiation Blue, Genesis Alpha One is available to buy right now on PS4, Xbox One and PC.