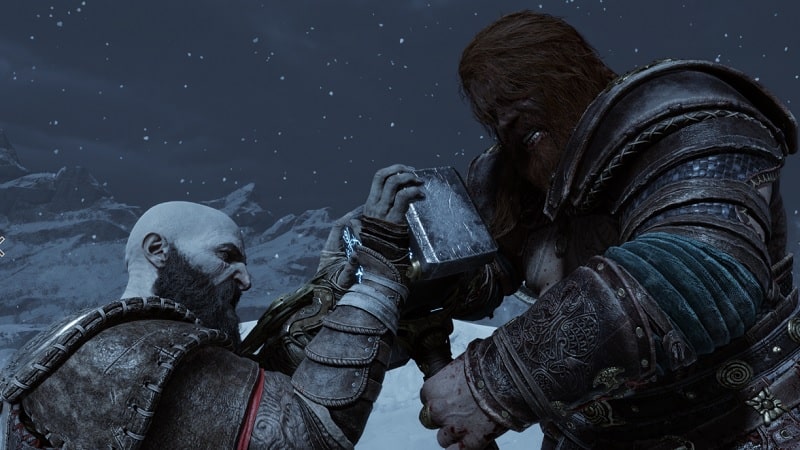 Based on my first four hours or so of play, if God of War: Ragnarok had a big screen, Hollywood counterpart, it would probably be the much beloved sequel, Star Wars: The Empire Strikes Back. The comparison is favourable one too. Not only does God of War: Ragnarok encompass a darker, more mature and seemingly tragedy laced storyline that correlates with the coming of age of Kratos’ son Atreus, but so too does it effectively maintain and build upon everything we loved about its predecessor. Quite simply, based on everything I’ve seen so far, God of War: Ragnarok justifies the hype, delivering a thunderous (if you’ll excuse the lazy pun) sequel to one of the best games on PS4 that stands at the zenith of Sony’s relentlessly stunning barrage of epic, single-player experiences.

Editors Note – There will be some spoilers for God of War (2018) in this early impressions piece. So if you have yet to play or complete that game, please be aware of that fact. Thanks!

Given just how perfectly 2018’s God of War managed to nail that pitch-perfect blend of exploration and combat, a blissful marriage that did for all intents of purposes make it feel like the hyperviolent spiritual heir apparent to Nintendo’s Legend of Zelda series, there was little need for developers Sony Santa Monica to rock the Norse longboat with God of War: Ragnarok.

To that end, playing just the first thirty minutes or so of God of War: Ragnarok will feel like slipping into a warm bath for fans of the previous game, as Kratos’ lumbering form navigates the environment with forceful aplomb, throws his boomerang axe and mixes up his Souls-lite esque combat (together with Atreus on support with his stunning arrows), in pretty much exactly the same way as he did four years ago. But that’s great right? If you enjoyed one of the best games ever and someone came to you and said “hey, would you like a whole lot more of that same best game ever?”, your answer would and should be a resounding ‘yes’ and that’s exactly what we seem to have here with God of War: Ragnarok. 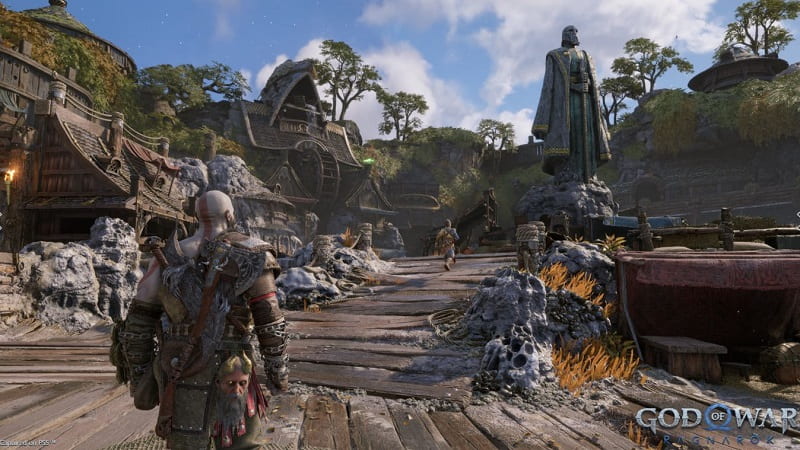 It’s not just the exploration and combat either, many of the puzzles that I have encountered in God of War: Ragnarok so far mirror the sort of logic and solutions that were threaded through the conundrums seen in its predecessor. This means you can expect to detonate bombs to destroy golden crusty rocks, use your axe to jam up machinery to progress and more besides. That said however, during a trip to the Dwarven realm of Svartalfheim there are some neat spins on the usual puzzles that you would normally experience, so that gives me hope that later on in the game such a level of innovation will be maintained and hopefully proceed on an upward trajectory.

Combat too remains largely the same as before with Kratos now able to switch between his trusty Axe and Chaos Blades weapons from the get go and able to mix up melee, ranged and runic attacks on the fly. As before, the stun/shatter system has been maintained whereupon if Kratos and Atreus unleash enough damage of a particular type on an enemy or perform enough perfect parries, they can force that foe into a stunned state where they can be executed in suitably violent fashion. Where God of War: Ragnarok tweaks this formula somewhat is in the new elemental focus that has been implemented into the combat system. In God of War: Ragnarok Kratos can now essentially charge his weapon of choice to provide a burst of elemental damage the next time he strikes, resulting in the Axe producing a concentrated frost based attack and the Chaos Blades kicking out an unholy amount of fire damage.

It’s a seemingly small tweak for sure, but much like the modest innovations seen with the puzzle solving side of things, it hints at a sequel that looks to skilfully maintain the essence of its predecessor all the while building upon it with meaningful and considered improvements. So, all of the fundamentals are there and though it’s much too early to tell at this stage how broadly Sony Santa Monica may have innovated on the core twinned exploration and combat beats that formed the beating heart of 2018’s God of War, the first few hours of God of War: Ragnarok waste no time in showing just how far the story and characters have come since the previous game. 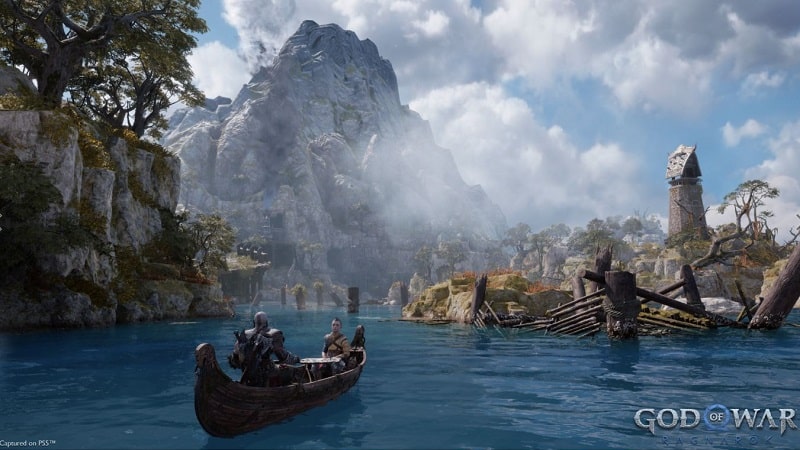 Within the first few moments of God of War: Ragnarok it’s clear that a fairly substantial time skip has occurred and nowhere is that better illustrated than in Atreus, the sometimes wayward but ultimately kind-hearted son of the titular God of War, Kratos. In God of War: Ragnarok not only has Atreus lost the high tones of his childhood, but he seems more world weary and experienced now, while also enjoying something of physical growth spurt that neatly matches his more considered and intellectually robust view on matters.

As such, God of War: Ragnarok feels a lot less like Kratos dragging Atreus around, showing him the ropes and keeping him out of trouble, and more like a buddy movie of sorts where Kratos and Atreus are something approaching equals and play off each other accordingly – a welcome development in their relationship dynamic for sure. Another character that is given much more room to shine this time round is for everyone’s silver-tongued, magic head, Mimir. Now much more than just a witty, disembodied digest of all things Norse, we actually get to hear about Mimir’s past exploits when he was physically whole, along with the soul-eroding regret that he holds for many of his past transgressions.

More pointedly, this points to a broader shift in overall tone, or at least it seems that way right now because God of War: Ragnarok feels like it has a real streak of tragedy running through it, even at this early juncture. Indeed within the first hour or so, God of War: Ragnarok wastes no time in sticking in the emotional knife and twisting it in the sort of fashion that 2018’s God of War never dared to do without seeming cheap or manipulative. Trust me, tears will flow. 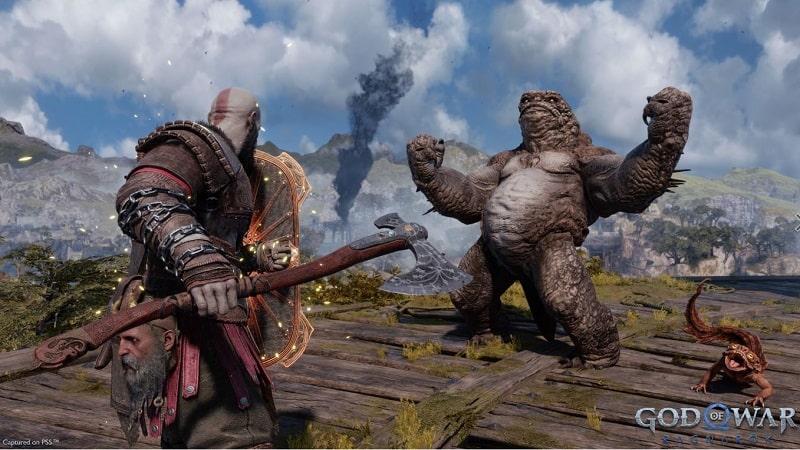 Perhaps more than any other element of its design DNA, the God of War games have long been defined by the embrace of brutal spectacle and God of War: Ragnarok only ups those stakes. Without spoiling too much, an early encounter unleashes a frankly titanic boss fight that is more epic than any of the fights in the previous game (and yes, that includes the excellently put together scraps with Baldur) and serves as a timely reminder that not only has developer Sony Santa Monica not lost its appetite for big budget, screen filling spectacle but that God of War: Raganrok is seemingly poised to go further, much further than any other game in the series to date.

Visually too, God of War: Ragnarok is already an astounding looking game that is flush with technical flair on PS5. Don’t let the cross-gen whiners get it twisted – God of War: Ragnarok looks superb on PS5, with much higher detail character models and environments that effortlessly put to shame what Sony Santa Monica accomplished with the humble PS4 hardware back in 2018. More specifically, the quality of facial animations has shot through the roof in God or War: Raganarok. I’m not sure if Sony Santa Monica has been taking some leaves from the book of The Last of Us developers Naughty Dog, but the various faces of the main characters in God of War: Ragnarok would seem to impart the sort of emotion and range of expression that they just weren’t capable of four years ago.

If God of War: Ragnarok does indeed mark the end of the series dalliance in the sprawling realms of Norse mythology, everything so far tells me that it’s shaping up to be one of Hel of a ride indeed and I can’t wait to see how Sony Santa Monica closes the deal.