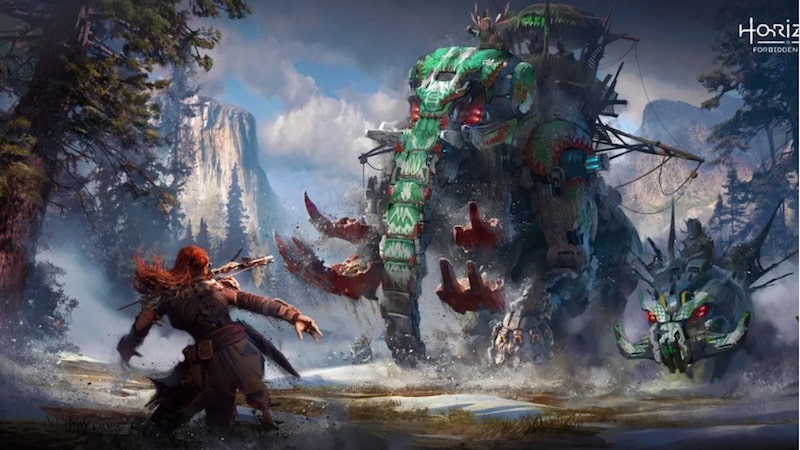 Guerrilla Games has lifted the lid on a slew of fresh Horizon Forbidden West details on the PlayStation Blog, this time diving into what players can expect from the game’s machines and how they have evolved from the previous game.

Blake Politest, the Principle Machine Designer on Horizon Forbidden West, spoke about how the team are expanding the machine catalog for Aloy’s next outing. One example given was that the team wanted a larger flying machine than the Glinthawk, which birthed the idea of the Sunning.

We studied various flying reptiles and primitive birds for inspiration, and came up with the concept of their wings collecting solar energy during sunny weather. This in turn created an interesting gameplay dynamic: Sunwings will be vulnerable when they are harvesting solar power, but are also more alert to potential predators when they are idle.

Unique behaviors like these become the basis and are then expanded on when we define the machines’ roles in the world. We always want to make sure the machines are connected, and that they serve a greater purpose; so the whole machine (eco-)system is in harmony – just like in the real world.

Elsewhere, Maxim Fleury, the Asset Art Lead on the project, described how players will need to “steady each machine closely to find different ways to approach it,” promising machines have various ways in which they can be dispatched.

In addition, machines may also help Aloy out, albeit inadvertently, as Blake added:

Some machines may also inadvertently help Aloy out. If a machine is searching for certain resources that Aloy happens to be after, they can lead her to stashes if she’s observant. Also, through overriding, Aloy can now exert some control over machine behavior, shifting them into aggressive or defensive states.

Horizon Forbidden West is scheduled for release on February 18, 2022 for PS5 and PS4.