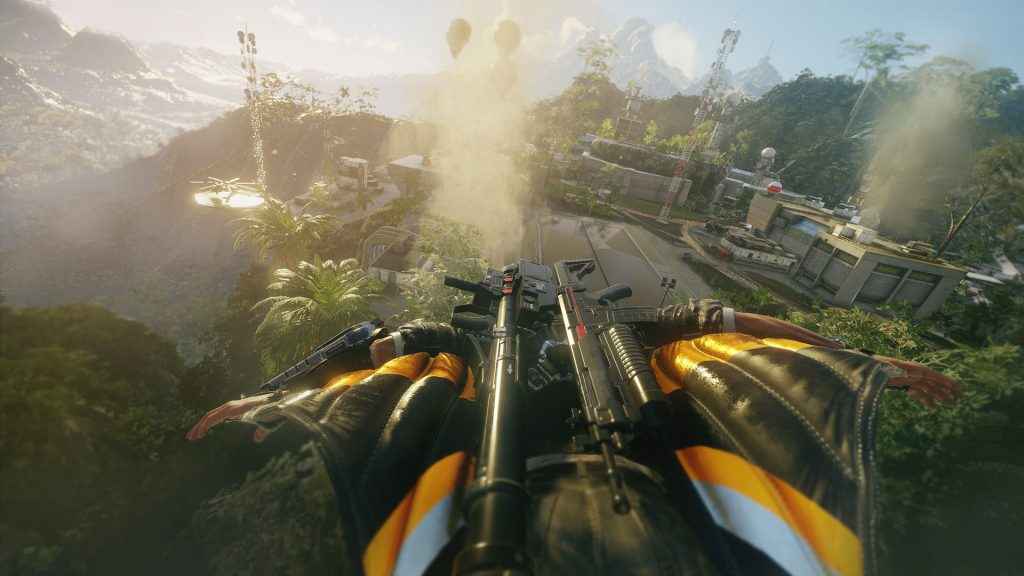 I only played Just Cause 3 last year, and after 10 hours I felt that a lot of its systems and mechanics were outdated and bland. In particular, the open world was one of the lowest points of the game, with only one biome and a bunch of checklist activities. After spending almost three hours with Just Cause 4, I can say the game certainly improves upon some of its predecssor’s flaws. Unfortunately, amny aspects of Just Cause 4 are far too similar to Just Cause 3

Just Cause 4 – The World Is Much Improved

The open world is far more interesting than Rico’s home island of Medici in Just Cause 3. Just Cause 4’s sandbox is the South American country of Solis and is home to four unique biomes, all of which are quite large. There are flat open fields and large stretches of countryside, Golden orange deserts and canyons, a beautiful, tropical rainforest, and snowy mountains at the epicentre of the island, towering over everything else. During my playtime, I got to explore all of these locales. Each one had its own unique feel and style. The rainforest barely had any towns or communities: instead, the upper class were scattered around in million dollar luxury homes and skyscrapers; however, the countryside was the opposite. The wealthy were nowhere to be found, with the large stretches of grass being filled in with small towns and farms.

Just Cause 4’s open world impressed me with the diversity of locations and scenery. I spent a good half-an-hour just exploring the island of Solis, using my wingsuit to take in the scenery, just to see everything. I actually, found that incredibly enjoyable, as I flew with ease.

Each biome comes with its own unique weather event, that takes up a large chunk of the area. The countryside gets a tornado, the canyons come with a dust storm, the rainforest can suffer from a tropical storm, and the snowy mountains feature a blizzard. These events are dynamic and can spawn anywhere within their given biome. Some such as the dust storm naturally will move across the map. I only saw the dust storm and the tropical storm when I played. However, both of them were impressive. The dust storm would dynamically pick up objects on and carry them along in its wind. Also, I couldn’t directly fly through it as the wind would carry me in whatever direction the storm was heading in. The tropical storm was far more impressive visually as I flew past lightning bolts as they arched to trees and radio towers.

Just Cause 4 – Characters and The Narrative Are By The Book

Just Cause 4 shares a lot of DNA with its predecessor. The story and characters appear to be as thin and uninteresting as ever.

Although I only got to play three of the game’s early missions, some big plot twist that makes the narrative more interesting could still occur. However, based on the series’ history I wouldn’t count on it.

Also, the characters seemed about as uninteresting as Just Cause 3’s. None of them had any intriguing personality or characters traits that would get me attached to them. They all seemed disposable and there to serve the narrative, not to create interesting experiences.

Whilst, on the subject of characters, character models did not look very impressive. Particularly, everyone’s hair looked less like hair and pencil lines that have been placed on top of a characters skull. Light reflected off of it far too much, giving it a really artificial appearance. This is not a big issue in the grand scheme of things. It was just extremely offputting.

This leads into a thought I had whilst playing the game’s missions. Instead of landing on the ground, walking over to someone, hitting a button, and initiating a cutscene, why not just remove cutscenes altogether.

I believe the experience would have been far more enjoyable if I could fly over a town hit the x button to initiate a mission with the character talking to you via radio. Constantly landing and watching a two to three-minute cutscene really felt like a chore, as all I wanted to do was head back into the open world.

The removal of cutscenes would still allow you to have missions and other characters, but they would be integrated into the gameplay experience, rather than feeling disjointed and forced into the experience.

Just Cause 4 – Gameplay Is Still As Crazy As Ever

A strength does come as a result of the game being so much like Just Cause 3, the action and spectacle are as wild as ever. All the tools from Just Cause 3 return allowing you to pull off some crazy stunts and kills. Retractors make a return allowing you to pull two objects together. Boosters return also. Air lifters are also present in the game allowing you to attach somewhere between four-eight small balloons to an object, lifting it into the air (I could not confirm maximum amount of air lifters that could be attached.) The ability to experiment with these tools has grown since the last game. All of these tools can be equipped into three different loadouts, which you can then quickly swap to in-game. There is no need to enter a menu and manually swap to each one.

So, you could attach air lifters to a car, boosters to the back and then a retractor between your car and an enemy. This would allow you to fly a car in the air, pull an enemy towards your car, and then boost away, carrying the enemy with your momentum.

These giant stunts are what Avalanche Studios are really pushing for this game, such as boosting and airlifted tank into an enemy base and raining fire from that tank. I personally took great enjoyment in attaching air-lifters to enemies, causing them to hang in the air. I would then torture them by slowly putting bullets into their body. Brutal but hilarious. Air lifters also work in indoor environments, so you can decorate a cave or building with hanging enemies if you are a sadist.

All three of these tools can be customised even further with mods that are earned as you progress through the game. You can eventually set height limits for your airlifters, causing any objects you to lift to stop being lifted at five, ten, and fifteen meters above the ground.

Another ability I got to play with was ‘pulse’ for the retractors. This emitted a pulse when two objects collided with each other, sending them flying in opposite directions.

So, I grabbed a motorbike and attached a retractor between it and a radio tower. Whilst riding the bike I activated the retractor, pulling me up towards the metal structure and then shooting me off hundreds of feet. I then jumped off and parachuted to the ground.

The room for experimentation feels almost infinite and people are gonna cause some really crazy things to happen when the game is released. I especially cannot wait to see what people can do in relation to the weather events, such as the Tornado. I had the most fun when I was experimenting with the world and naturally seeing what I could accomplish. The game appears to be borrowing a lot of open-world mechanics from Far Cry 5. The open world is fully explorable from the start of the game, allowing you to go in any direction you want. Completing activites will increase your squad’s presence in a region, leading to you gaining control, similar to Far Cry 5’s resistance point system.

On top of that, you can call in vehicles and support items to assist you in fights. These are on a cooldown, the same as the fast travel system. This means that you can only fast travel a limited number of times in a given timeframe, which I felt was a weird choice. In fact, the cooldown system seems like a strange feature, given the fact that Just Cause 4 is all about chaos and carnage. Cooldowns on items and vehicles limit your ability to do that.

Just Cause 4 – I Still Have Some Concerns

My time with the game did raise a few concerns. The side activities still feel stuck in the past with checkbox-like activities, such as races and wingsuit challenges. The one side mission I played did not take advantage of Just Cause’s strengths.

I spent ten minutes driving a hacker around so that he could hack into a system. Each time he had to hack something, I then had to defend him for a minute or two. This resulted in a wave-based shooting gallery, rather than seeing what I could do with the environment. I did only get to play that one mission, so there could be more inventive ones in the game; however, it did not get me hopeful.

The early main story missions I did get to play seemed to be more inventive, with one having me try to destroy a car with a member of the Black Hand in it.

On top of that, the game had a few performance issues. I was playing a PC build of the game, that did not have the day one patch so these issues could be improved by the game’s release.

Objects would very often pop in at a distance. At a close-to-medium range, this was not an issue. However, if an island was in the distance you could clearly see trees and foliage popping in. Character models didn’t look great but were serviceable. However, the frame rate did manage to stay stable, even when dealing with dynamic weather events. I have no idea if this will translate to the PlayStation 4 version of the game. Overall, after my time with Just Cause 4, I left with a fairly neutral opinion of the game. The environments and world have been vastly improved, with more varied locations. However, a lot of the game is the same as Just Cause 3. Those mechanics and systems are almost all solid and work well. I just felt that Avalanche could have improved upon some of the more flawed aspects of the series, such as the narrative and characters.

In short, if you like Just Cause 3 and experimental sandboxes you will have a cracking time with Just Cause 4. If you want an interesting narrative with compelling characters, you may want to look elsewhere.