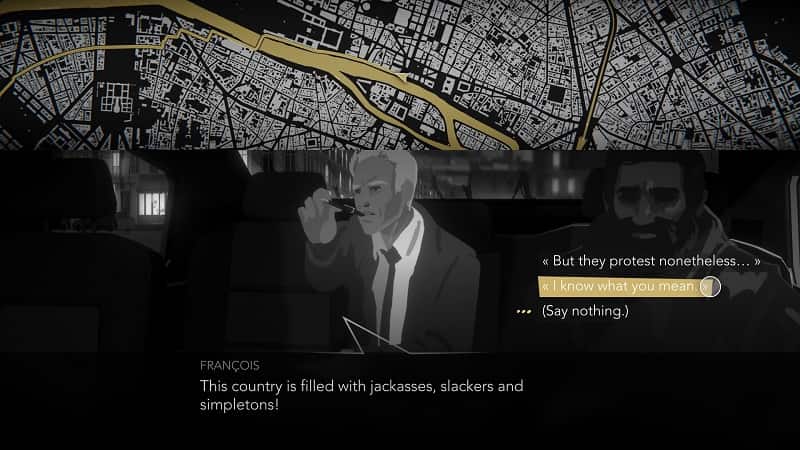 Night Call will no longer release on PS4, its developer has said.

Making the announcement on Twitter, developers Monkey Moon and Blackmuffin have confirmed that its Parisian-Noir adventure will sadly not see a PS4 release. Poor sales of Night Call on other platforms and issues with the porting process were cited as reasons.

You can catch the Night Call PS4 cancellation tweet below.

Please note that we're probably as disappointed as you are. But we just can't afford it. 😓

Shaping up to be an evocative Noir adventure, Night Call on PS4 would have cast players as a taxi driver looking to stop a serial killer in noir-steeped Paris within seven days.

Sadly though, the sobering reality of high sales performance coupled with the budget needed to make a PS4 version a reality, now means that PS4 owners will likely never see Night Call on the platform.

A pity indeed, not least because Night Call would have made a fine addition to the PS4’s vast selection of great indie games.

You can catch the synopsis for Night Call from its Steam page below:

A mysterious serial killer stalks the streets of modern-day Paris. The body count rises, and the police are no closer to catching the culprit. You are a taxi driver and survivor to the killer’s most recent attacks, having barely escaped with your life. You have seven nights to help find the killer, or the police will pin it on you. These next few shifts will be far from ordinary or safe…

Night Call is a non-linear, narrative-driven noire investigation game. You are no detective, but you do have a gift. Around you, people feel more at ease. They talk. They share their thoughts, their emotions, their stories… their secrets. To passengers, you are more than just a driver; you are also a friend, a confidant, a shrink. A voyeur catching a glimpse under the masked but very real lives throughout the City of Light. And you’ll need to play these roles well if you want to catch the killer.

Use the limited time you have available each night to gather clues while earning money to pay your bills. Drive passengers to their destinations, hear their stories and choose your responses carefully—some are just regular people with a tale to tell, while others might reveal a clue that’s key to your investigation. Follow the right leads to uncover new info about the suspects, and don’t forget to make enough money to buy gas and pay your bills.

Can you solve the mystery before it’s too late? Better hurry—both the clock and the meter are running…