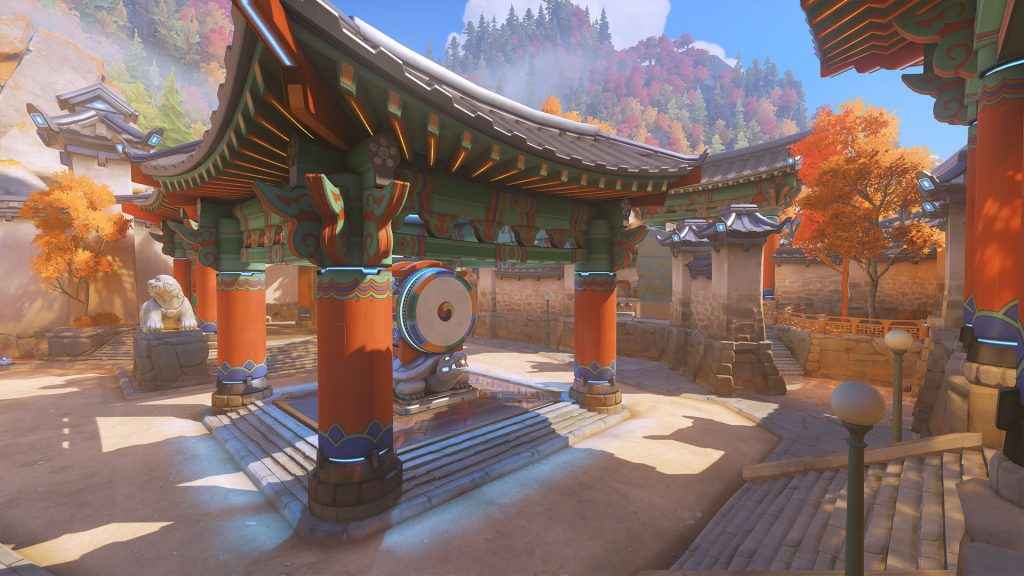 The latest Overwatch update 1.28.0.1 is here. Bringing with it a host of tweaks to Blizzard’s hugely popular shooter, as well as a brand-new map: Busan! Check out the patch notes and find out what’s new.

Travel to Busan, South Korea and battle for control across three distinct locales within one map: Sanctuary, Downtown, and MEKA Base.

Explore the serene setting of the Sanctuary, surrounded by an ancient temple, beautiful gardens, and historic architecture. Clash in the bustling metropolis of Downtown, where players will fight across a busy PC bang, flashy karaoke bar, and central light rail station (just watch out for the train). Contest for position in MEKA Base—home of South Korea’s frontline defense against the gwishin omnic attacks: D.Va and the rest of the MEKA squad.

Reads the official blurb. Before explaining that various changes have been made to improve the overall experience of playing on the Busan map since it first entered the Overwatch PTR a few weeks’ back.

We expanded and built out parts of the MEKA Base that made it intuitive for players to understand the space they’re in and to offer unique gameplay moments.

There are three blast shields that go up and down, providing cover from enemy fire. An alarm accompanied by a flashing light and steam indicates when the shields will rise from the ground, signaling to the team that it is safe to attack the point. This is the first time we’ve intentionally designed moving terrain as part of a map’s strategy.

Elsewhere, the latest patch introduces a Hero Gallery filter to make it easier for players to scroll through the game’s surfeit of cosmetic items and a visual outline enabling allies to see one another through walls.

Ana (Biotic Rifle): Increased the precision of the Relative Aim Sensitivity (while zoomed) slider. This can be found under Options > Controls > Hero > Ana

Brigitte (Shield Bash): Now knocks down and gets knocked down by other charging targets (e.g. Reinhardt and Doomfist)

Reinhardt (Earthshatter): Now consistently hits enemies near walls; no longer hits enemies that enter the damage cone after the wave has passed that area; no longer damages enemies behind barriers blocking it, even if the barrier is later dropped or destroyed; always travels up inclines and around the payload

Widowmaker (Grappling Hook and Widow’s Kiss): Grappling Hook now retains momentum when used on environments or structures without a ledge (e.g. walls), while Widow’s Kiss has increased precision of Relative Aim Sensitivity (while zoomed) slider. This can be found under Options > Controls > Hero > Widowmaker

The remaining tweaks and bug fixes (as always, there is quite a lot to read through) can be found on the official Overwatch website, here.

Overwatch 2.42 update has been deployed. The 180mb patch hasn’t been accompanied by any patch notes from Blizzard, so we presume it’s just to fix a few bugs. Blizzard recently released a charity skin called Pink Mercy, which is available for a limited time. Proceeds from sales of the Overwatch Pink Mercy skin are being sent to the Breast Cancer Research Fund (BCFR), with Blizzard promising to donate a minimum of $250,000 and 100% of all proceeds.

In fact, it’s caused a bit of controversy this week. Sony listed the Skin on the PlayStation Store, and the donation was listed as less than the price that Blizzard said would be donated for each item. While Blizzard listed £12.99 in their official press release, Sony stated the donation would be £10.12 on the UK Store.

Sony has responded saying: We are not making any profit from the Overwatch Pink Mercy Skin.So, there you go. Why they listed the donation as smaller, and still haven’t amended it is a mystery.

If you do find out what the Overwatch 2.42 update has actually done, let us know in the comments below.