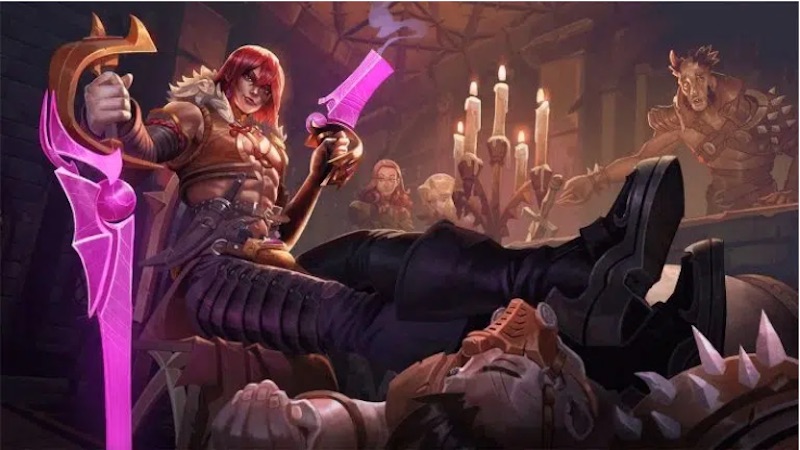 Hi-Rez Studios has announced the full list of Paladins update 2.57 patch notes, which is a major content rollout for the Constellations update bringing a new Champion, bug fixes and more. Check out the Paladins patch notes below.

Consume 3 ammo to fire your gun once every 0.85s, dealing 350 damage per shot and Slowing enemies hit by 10% for 2s, stacking up to 3 times. Fully effective up to 100 units. Love shares an Ammo pool with War. Passive: Piercing Momentum – Hitting an enemy with Love gives you a stack of Piercing Momentum, increasing the rate of fire of War by 8% for 5s. Maximum of 5 stacks and each stack expires independently.

Attack with your Rapier in a chain of attacks, dealing up to 350 damage per hit to enemies. Fully effective up to 65 units. War shares an Ammo pool with Love. Passive: Sharp Momentum – Hitting an enemy with War gives you a stack of Sharp Momentum, increasing the rate of fire of Love by 8% for 5s. Maximum of 5 stacks and each stack expires independently.

Shoot out a Piercing projectile that travels more quickly based on the total number of your Piercing and Sharp Momentum stacks. Deals 750 damage and stuns enemies hit for 0.7s.

Twirl towards your crosshair, dealing 300 damage and knocking back enemies hit during the dash. At the end of the dash, stop and whirl in place, dealing 450 damage to enemies in an area and reduce the Cooldown of this ability by 1s for each enemy hit. While dashing, the damage you take is reduced by 30%. You can reactivate this ability early to stop and whirl sooner.

Summon 5 Ethereal swords around you. Each time you use fire use Love or War, fire off one sword that Pierces all enemies hit, dealing 800 damage per projectile.

Fire a weaker copy of Rogue’s Tempo forward from your crosshairs for every 6 Ammo consumed.

[LEVEL 2] EVERYWHERE AT ONCE

The Cooldown of Deadly Momentum is permanently set to 5s and cannot be modified, reduced, or increased through other means. Gain 1 stack of Piercing and Sharp Momentum for each enemy hit with Deadly Momentum.

Increase the Range and Damage of War, but decrease its rate of fire. War’s attacks now Pierce enemies and deal an additional 20% damage to each enemy hit for each enemy hit in total with your attack.

BOTH SIDES OF THE COIN

Extend the duration of Piercing Momentum stacks gained by hitting with War by {12|12}%.

Increase your Reload Speed by {7|7}% for 3s after hitting an enemy with War.

Each stack of Piercing Momentum Heals you for {30|30} after it expires.

Extend the duration of Sharp Momentum stacks gained by hitting with Love by {12|12}%.

ROGUES OF A FEATHER

Increase your Movement Speed by {12|12}% for 3s after hitting an enemy with Love.

Each stack of Sharp Momentum grants you a {40|40} Shield for 3s after it expires.

This will increase the max daily rewards.

We’ve long heard community requests to bring back some game modes out of Paladin’s history. Looks like Atlas managed to conjure this one out of the ether, so in lieu of a 3rd Siege: Beyond variant, we hope you’ll enjoy this blast from the past!