Here’s what we learned from a day with the apes. 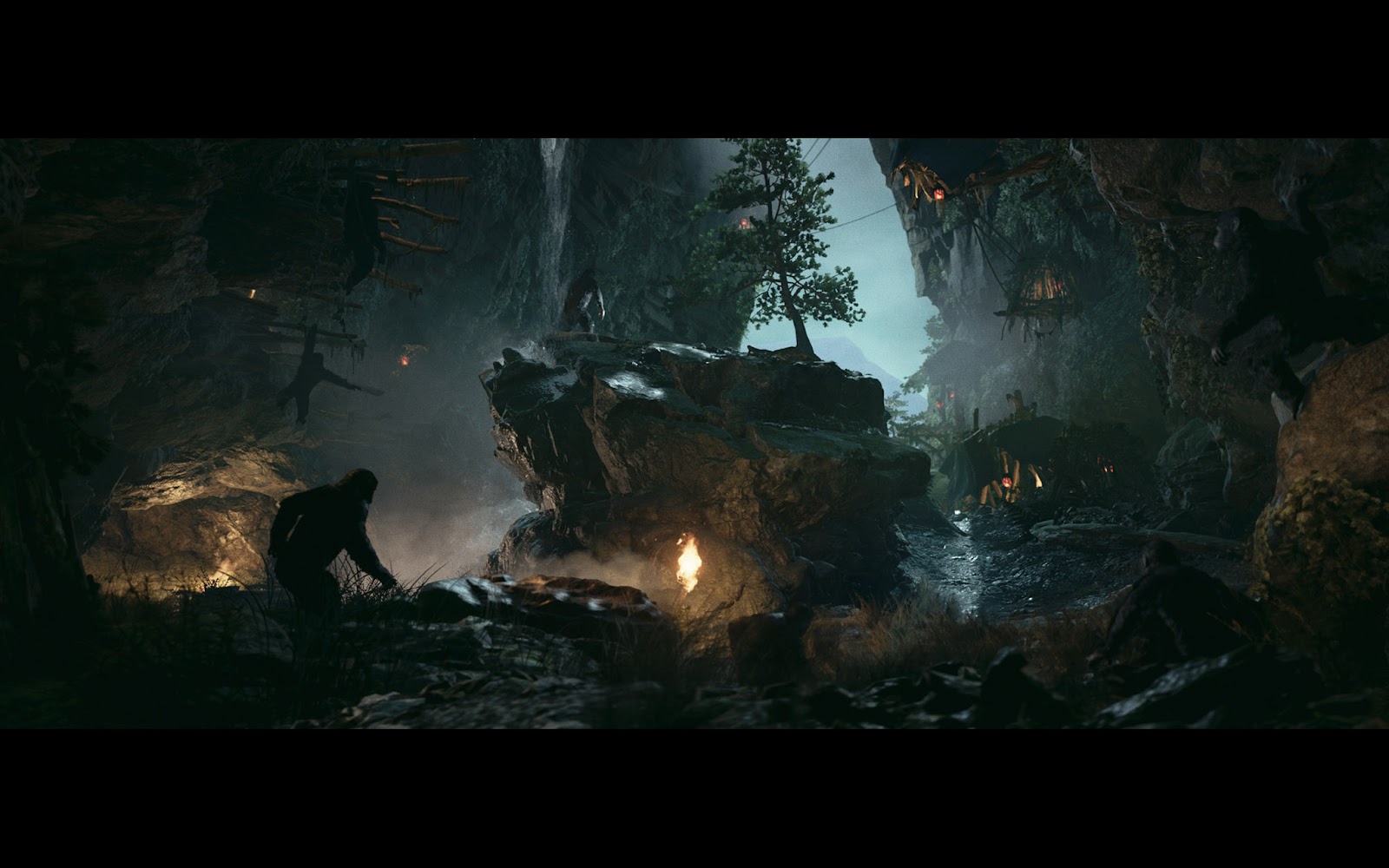 Before getting to grips with the game, I got the Apes rundown from Martin Alltimes, Head of Imaginati Studios; who are in partnership with Andy Serkis’ production house, The Imaginarium. “After working for many traditional publishers, including Sony and Guerilla games,” said Martin “I wanted to try something new with interactive fiction.” Inspired by their experiences with Heavy Rain, Until Dawn, Life is Strange, and productions of the Telltale variety; they wanted to expand the field of engagement, reach a broader audience, and move the genre forward.

To do this, the two major actions they took were to remove navigation and add multiplayer. By removing navigation, the studio could focus on the core mechanic: choices. “We felt that navigation had been justifiable as a mode of detective exploration in context with games such as Heavy Rain and Life is Strange, which had Scooby Doo-esque elements throughout the narrative.” explained Martin. “I don’t invest in technology. We use Unreal, literally out of the box, and we have a very small number of coders,” Martin tells me, “the reason for this is that I want my company to face creative challenges rather than technical challenges.” Planet of the Apes: Last Frontier is purely about the narrative and streamlined gameplay for movie length group engagement. A group of people are unlikely to sit through an 8 hour playthrough together in one sitting; not without someone leaving with suspicious, controller shaped bruises at least…

How does the multiplayer work? Planet of the Apes: Last Frontier, is a game for up to four players and supports PlayLink. If you haven’t experienced PlayLink, it aims to bring social gaming to the fore as you and your pals’ mobile phones become controllers – utilised in PlayStation 4’s That’s You!, Knowledge is Power, and Hidden Agenda.

Planet of the Apes: Last Frontier works in a similar vein to Hidden Agenda; a narrative, cinematic adventure in which you and your companions vote for what you believe to be the best choice. There are three main endings in Last Frontier: apes win, humans win, or peace. There’s a multitude of other endings available alongside this, but ultimately you are aiming to achieve one of these. The thing is, maybe your ‘companions’ playing alongside you aren’t going for the same outcome… 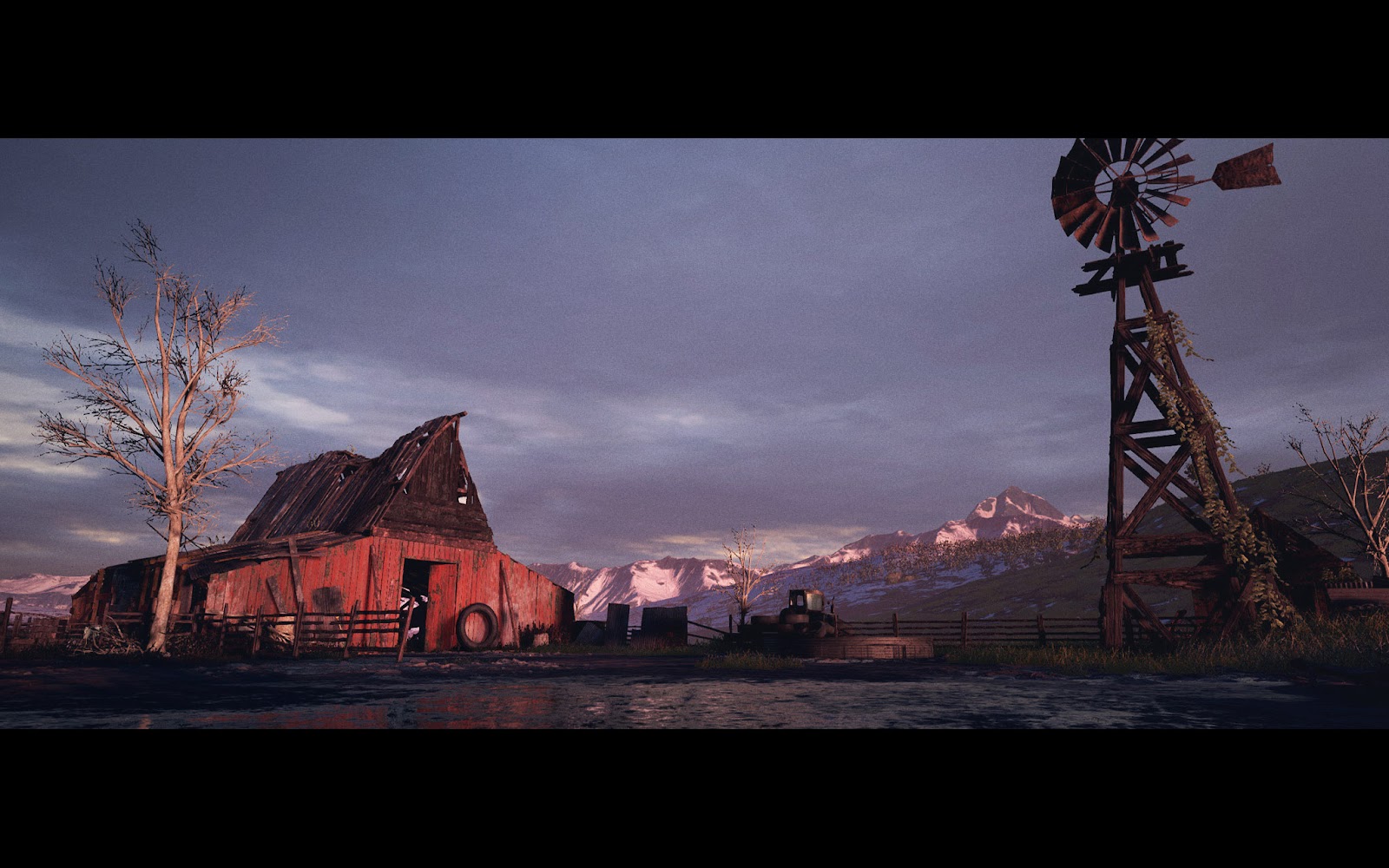 The apes arrived at their mountain home in the spring and now winter approaches, food is less plentiful and the apes will start to starve. They need to find food. The father of these three sons doesn’t want them to go into the valley, because he knows you are more likely to find humans there – in the Planet of the Apes universe this is bad news. His eldest son ignores those orders and they’ve come across food at a farm…

What do you do now?

We instantly hit a tiebreak situation during the first vote. Hey, I’m annoying like that, but this means we can find out how this works, so be thankful! Now, we can either discuss our choices and attempt to convince our opposing buddies on the sofa to change their stance, or if you have the ‘Tiebreak Icon’ you can overrule the other player(s) without discussion. We followed my seemingly cautious path, which slowly became our undoing. 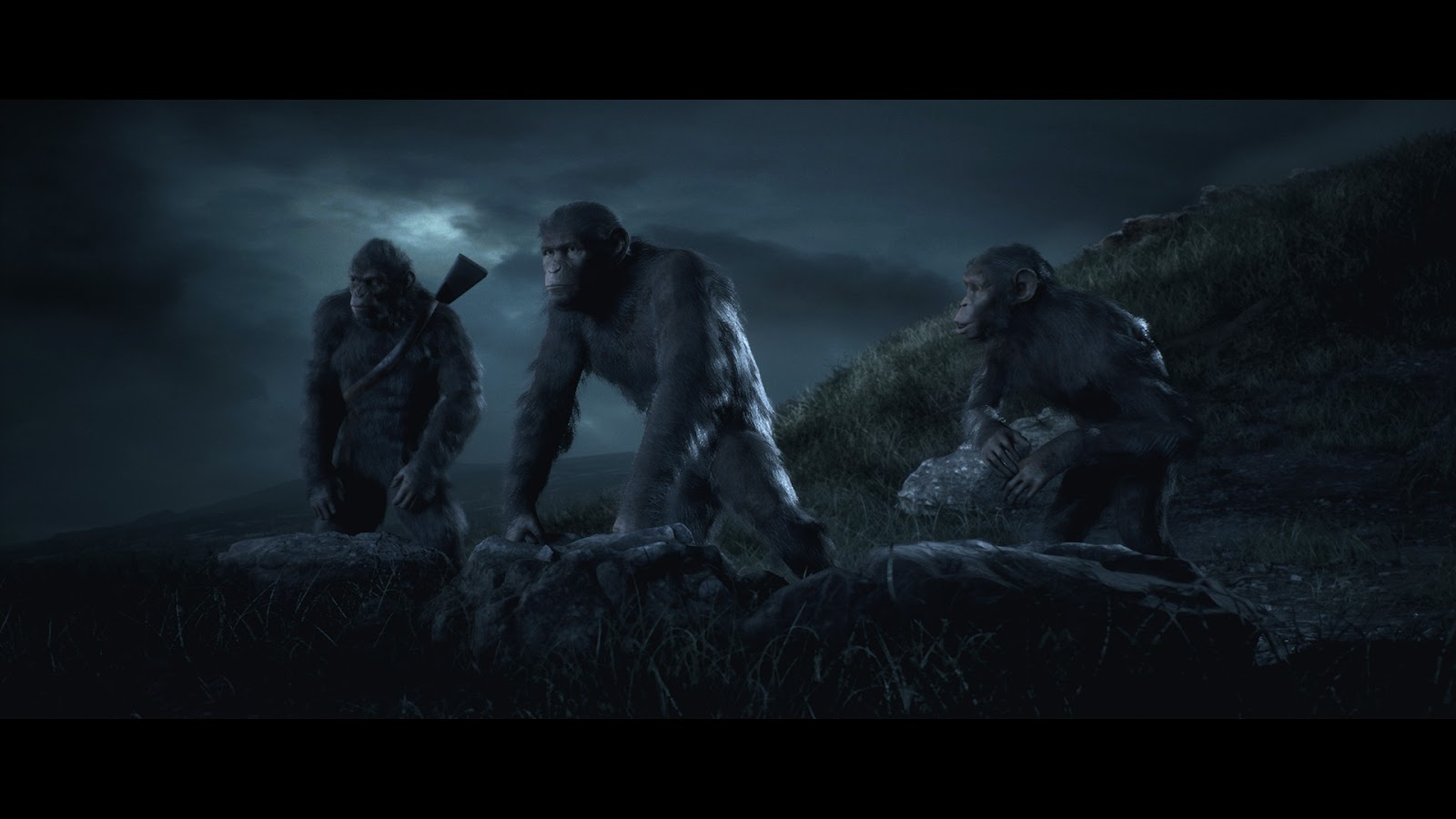 As is common in choice based games, how you interact with each character can have major consequences instantly or later on down the line. This scene illustrated this with an ape called Juno, who is considered a bit of a liability to the other apes in the party and is the youngest of the brothers. The oldest brother, Tola, will not favour you if you are sympathetic to Juno and vice versa. In this scene he begins to panic loudly, while you are debating what action to take. Juno’s panic could alert the humans ahead of time, which could be the trigger that begins open conflict. Of course he’s not the only potential tripwire; you could choose to take the offensive and storm the farm instantly, or attempt to steal the supply in the hope that you won’t be discovered. Whatever the case, this scene acts as the inciting incident which leads to the ape and human conflict in Last Frontier. Even though this scene’s punch-up is inevitable, how you dealt with the situation as a whole will affect the direction of your game.

How does Planet of the Apes: Last Frontier handle action? “We didn’t want it to be skill based. Originally we had a skill based system a bit like quick time events, but we wanted to make this as broad as possible,” explained Martin, “think how many people have a PlayStation in their homes, used by only one person. We wanted to keep the mechanics and interaction really simple.” With the wider audience in mind and keeping the focus on narrative direction, the Action Choice is introduced. “In the game’s normal choices, when you make them, it’s just majority rules. Action Choices, which normally involve life or death, goes up to a vote which is time limited.” Here the Action Choice gives you the chance to kill one of the humans, or let them go during the scramble…Turns out the kill option leaves the human in question injured and they survive the attack – enter, inciting incident. 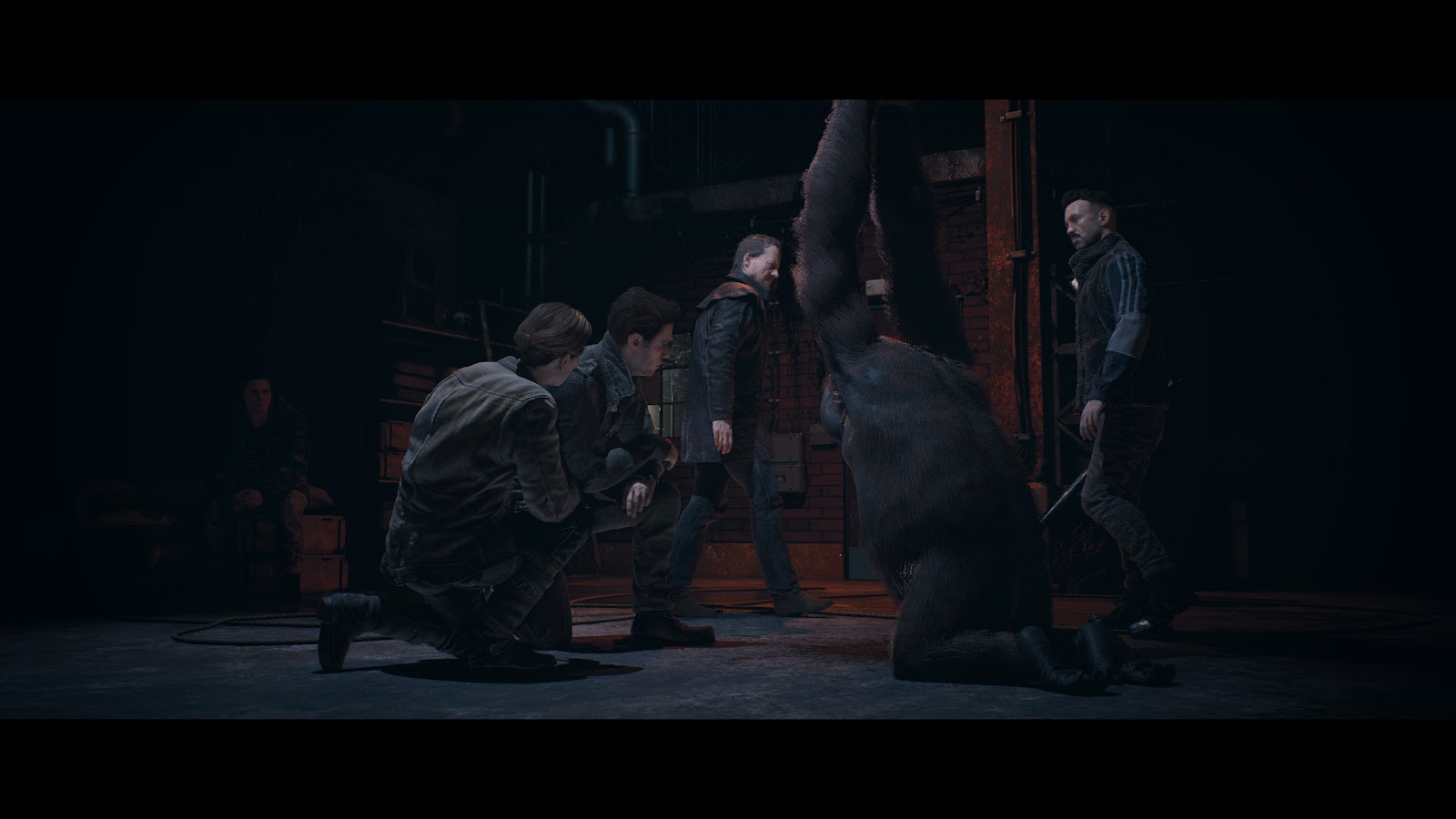 This scene is later in the game; there have been multiple conflicts with the apes, humans have died, but you have captured an ape and he has vital information that’s going to tell you the location of the apes.

With no more mechanics to learn, we went straight into what was presented as one of the toughest scenes in the game, in which the humans torture a captured ape for information. With moral codes all over the place between the humans involved, it’s time to make tough choices, if you can make them. During this scene we looked at how the decisions felt natural, with the ability to change stance as more information and differing arguments are presented to you. As in real life, nothing is ever straightforward. “Writing an interactive narrative where you’re trying not to make the choices black and white (was challenging),” said Martin, “you’re allowing there to be moral ambiguity, allowing your characters to make bad choices that feel legitimate, and ultimately you’ve got to be able to change your mind as you play” People can change their opinions, or even switch sides. Of course, some bad decisions are irreversible, but in conversation things can change. The idea here is that, ultimately, you get to make a final decision that feels real. 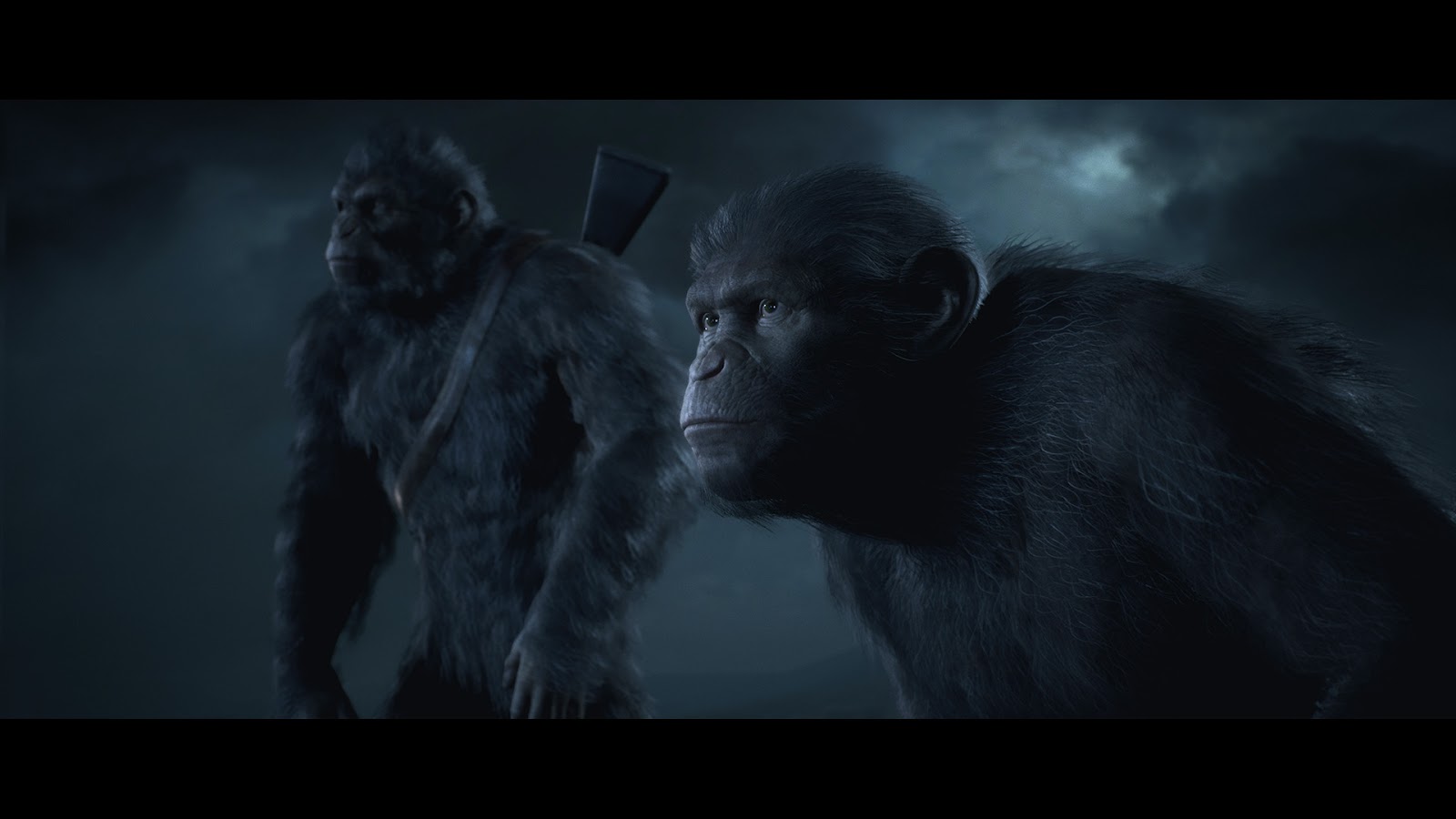 I know nothing about Planet of the Apes – why would I play?

Canonically the universe placement sets this between Dawn and War, however it is designed to stand alone so that anyone can play without any franchise knowledge: “It was definitely designed to stand alone,” said Martin, “One of the advantages of setting up your own fiction is that you don’t have to rely on anyone knowing the characters from the movies. As long as you know it’s about apes that can talk and are in conflict with humans, then you’re good to go!”

Presumably those purchasing Last Frontier initially will be fans, however, as a stand alone interactive movie for social engagement, it sits as a fun entry point into the franchise and is accessible to all. Without any extra mechanical faffs, you focus and engage entirely with the pacy, more naturalistic conversations – making room for a multitude of narrative possibilities. So, instead of simply watching a movie together, why not watch Planet of the Apes: Last Frontier and choose what happens within the same cinematic timeframe? “Whether you’re playing with someone who’s your partner or your family and friends, it becomes a social experience.” said Martin, “the PlayStation is typically an item that sits under a television set used by one person – it’s in a natural place to be used by everybody.”

Planet of the Apes: Last Frontier