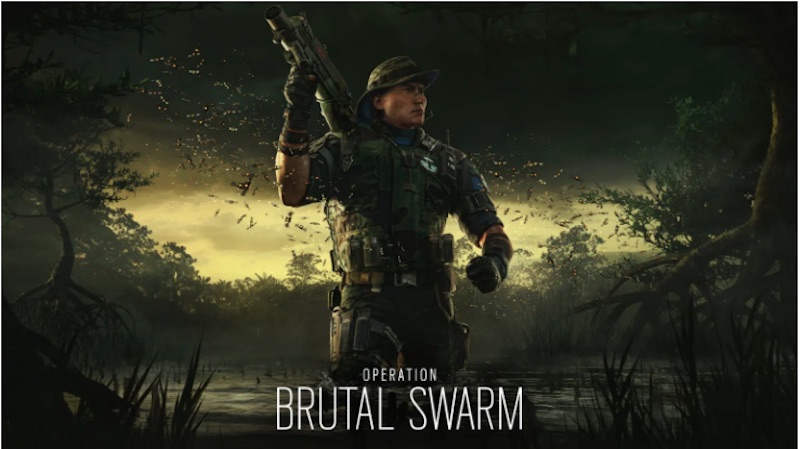 The Rainbow Six Siege update 1.000.036 patch notes have been announced by Ubisoft today, and this is a big one folks, bringing a new Operator in the form of Grim, changes to the recoil system, and a bunch of key bug fixes.

FIXED – Thermite’s Exothermic Charge only destroys the metal part of a reinforced wall.

FIXED – Shotgun rounds are invisible if a player reloads with 1 round left and fires the shotgun at the same time.

FIXED – An Operator’s gadget automatically activates after swapping from their gadget to their ability and then back.

FIXED – Some gadgets have no collision with the hostage.

FIXED – While crouch-walking, the Operator slows down when the controller stick-input is within a certain range.

FIXED – Defenders can still shoot with the Bulletproof Camera while Dokkaebi is hacking the Defenders’ Observation Tools.

FIXED – Meleed barricades on Clubhouse map don’t always appear destroyed for some players after an Attacker has repelled through them.

FIXED – Operators can shoot through indestructible windows on Villa map.

FIXED – An Operator’s left knee clips through an equipped Ballistic Shield when looking around.

FIXED – Montagne can’t pick up or drop the defuser while Le Roc Shield is extended.

FIXED – IQ’s shoulder is displaced when activating the Electronics Detector.

FIXED – Observation Tools hacked by Dokkaebi aren’t deactivated by Thatcher’s EMP Grenade when an Attacker is using them.

FIXED – Ying’s Candelas are marked with a generic ping instead of a contextual one.

FIXED – Bandit’s Shock Wire can’t be deployed on a reinforced wall if Melusi’s Banshee or Goyo’s Vulcán Canister is deployed in the center.

FIXED – The activation sequence of Ela’s Grzmot Mine doesn’t reset after being deactivated by Thatcher’s EMP Grenade.

FIXED – Mute receives score points when Blitz goes within range of a Signal Disruptor after activating a flash charge on the G52-Tactical Shield.

FIXED – Pinging Iana’s Gemini Replicator produces a generic ping instead of a contextual one.

FIXED – Grim’s Kawan bots have different sizes depending on the set Field of View.

FIXED – Iana can control the Gemini Replicator from the Drone POV when deploying both of them in quick succession.

FIXED – Grim’s Kawan Hive Launcher has a delayed launch when double tapping the firing button with the launcher equipped.

FIXED – Nomad’s Airjab reload animation is incorrect when a grip is equipped to her weapon.

FIXED – Glaz’s Flip Sight is not aligned with the iron sight of the OTS-03 weapon.

FIXED – The suffix of a player’s nickname won’t load correctly if they reboot the game while reconnecting to a match.

FIXED – Incorrect voice lines are played when Operators are hit by friendly fire.

FIXED – Camera gets stuck when spectating a match if the spectated Operator or drone is eliminated or destroyed.

FIXED – Visual issues in the Home section and Operator Showcase.

FIXED – The After Action Report is not displaying the intended animation.

FIXED – Operator icons overlap when viewing someone else’s perspective as a Spectator.

FIXED – The warning message is missing from the confirmation panel when activating any type of Booster.

FIXED – Players are unable to use voice and text chat while in the lobby of an Online Custom Game.

After a workshop and discussions with the pro teams, Stadium 2021 is being added to the map pool. However, you’ll be seeing this map under a different name: “Stadium Bravo.”

Stadium Bravo is a combination of Border and Coastline. The well-balanced sites and features are color coded and contain less clutter, making it feel different, and yet familiar.

Players need to be friends through Ubisoft Connect for over 90 days and be using the same platform to gift of a Battle Pass to each other. Examples include PC players gifting to other PC friends, while Sony PS4 players can only give to PS4 and PS5 friends. There is no region lock on the other hand, so there is no better time to work on your team skills no matter the distance.

This season introduces an all new operator going by the name of Grim. The team describes him as an aggressive attacker who has a utility that shoots out canisters of bees that follow players around. You can read up on the full character overview here: Rainbow Six Siege Operator Grim Abilities Overview and Gameplay

This season we’re adding the Impact EMP Grenade, a new throwable gadget that explodes on impact to deactivate nearby electronic devices for a short period of time.

You’ll be able to find it as 3rd gadget option for these Operators:

We overhauled the recoil system with the aim of making weapon recoil more meaningful. In this new system:

In the past, console recoil was adjusted based on PC values and modified for console. With this approach, console recoil values can be adjusted separately from PC allowing us to focus on the needs of console more accurately.

Last season we introduced Reputation Penalties by adding a penalty for abusive friendly fire, and this season we are introducing a new penalty for abusive text chat. While active, this penalty mutes repeat offenders by default to prevent hateful and abusive content in text chat. Muted players can still send and receive messages in text chat, however their messages will only be seen by players who choose to unmute them.

The abusive text chat penalty will become active later on in Season 3 rather than during the season release. When released:

We’ve added a new way to report cheaters in Match Replay. Now you can report a player if you weren’t able to during a match or if you discover someone cheating while watching footage from your last matches.

We’ve changed the Map Ban Phase to now display 5 maps instead of 3. This will increase map diversity while also maintaining player agency for removing certain maps from the pool.

We’ve updated the Tactical Map to provide more crucial information to Attackers and help them make more informed decisions during the Preparation Phase.
Attackers can now see a list of available Defender objective locations.
The floor map and objective locations will be displayed when they are discovered by the Attacking team.