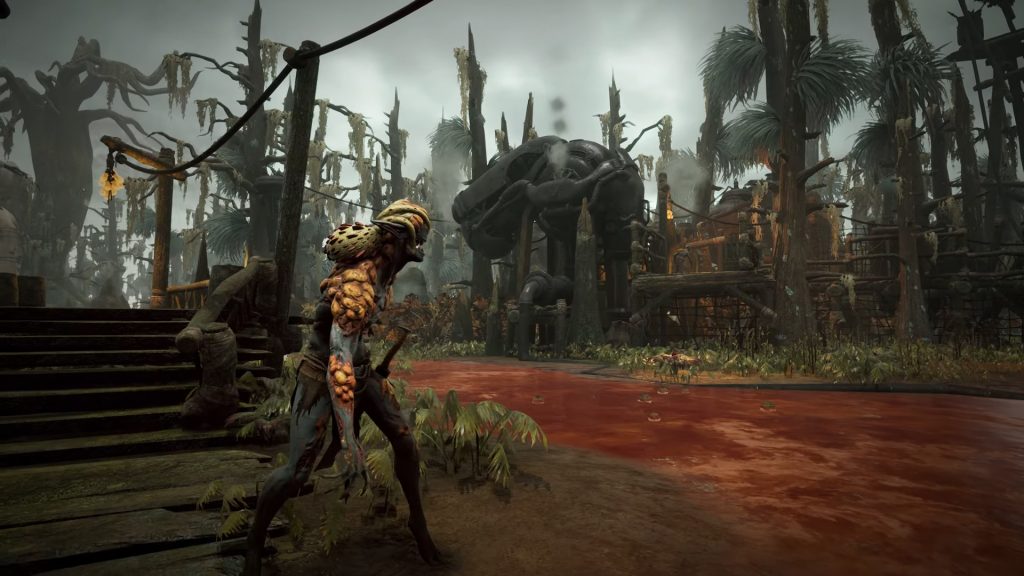 Gunfire Games has released the Remnant: From The Ashes Update 1.05 Patch Notes. And, a lot has been fixed on the PS4 version, including bugs, balancing, stability, and more. We have the full low-down below.

The full Remnant: From The Ashes Update 1.05 patch notes as found on RemnantGame.com are as follows:

DEVELOPER COMMENT: We’ve also made a handful of other adjustments for general quality of life. Players can now access VOIP, bind a push-to-talk button, and disable it completely if they so choose.

DEVELOPER COMMENT: The most notoriously difficulty encounter in the game, Radiant Tomb has been re-tuned to be fairer to the player and reducing the need for a very specific loadout.

DEVELOPER COMMENT: The Repeater Pistol ended up falling off a bit due to its accuracy. We improved the overall handling without making any damage changes.

DEVELOPER COMMENT: While an incredibly powerful weapon, the Hunting Pistol suffered from a smaller ammo reserve (less total damage) and had an abnormally high moving penalty for being a single-shot weapon (which is already somewhat of a penalty). The Hunting Pistol is now much more accurate – both stationary and moving – and reloads faster between shots.

DEVELOPER COMMENT: The Hunting Rifle has always been considered the baseline for all other weapon balancing. However, even with pin-point accuracy while stationary, the initial spread was too great which prevented quick reaction shots. Additionally, the per-shot spread was a tad too high making it much harder to quickly pick off targets than desired.

DEVELOPER COMMENT: To further separate the Coachgun from the Shotgun, we’ve increased the ideal range. The tighter focus, reduced drop-off, and incredible burst combined with the longer range makes the benefits of the Coachgun a bit more obvious. Additionally, we added +4 shells to the reserve ammo pool to bring the total damage in line with other longguns.

DEVELOPER COMMENT: The Assault Rifle, while highly damaging, has always suffered from too much weapon spread too quickly. We’ve lessened the spread curve and the maximum amount of spread to bring it closer to our vision of an Assault Rifle. It also gained +4 ammo in the clip.

DEVELOPER COMMENT: The Crossbow suffered from using the projectile reticle so we changed it to use a normal static reticle. While we still have many adjustments planned, we felt this was a solid interim solution.

DEVELOPER COMMENT: With the Hunting Rifle adjustments, we wanted to also update the Eye of the Storm (which is basically a lightning Hunting Rifle). It received similar handling adjustments as well as gained additional ammo.

DEVELOPER COMMENT: Widely considered the most powerful weapon in the game, we wanted to bring the Beam Rifle closer to the other longguns. The initial damage was reduced by 2 requiring slightly longer DPS time to reach maximum potential. We also significantly increased the time it takes to reload so that maintaining the beam for as long as possible is the best way to maximize its potential. While it still does similar (slightly more) total DPS than the Assault Rifle, the AR always deals a constant / reliable amount of damage whereas the Beam requires a longer commitment but has a higher top-end.

DEVELOPER COMMENT: The Hive Cannon is just a fun weapon. We wanted to make it more fun. We reduced the total number of Hive Shot charges and gave them to the primary shot (less reloading). We also increased the reload, while also dramatically buffing the damage of the Hive Shot DOT. As a trade-off, we increased the mod buildup requirement.

DEVELOPER COMMENT: While we have a handful of changes in the works, we wanted to first adjust the accuracy of the reticle to better represent where the shots will land. Many more tweaks to PA coming soon!

DEVELOPER COMMENT: The Defiler didn’t really need much. We adjusted the initial spread by a small margin so players could better enjoy its secretly good range (for a Shotgun). We also removed a tiny bit of lag on firing Radioactive Volley back to back.

DEVELOPER COMMENT: The Curse of the Jungle God felt a little too slow for our tastes, so we sped up the fire rate and made minor adjustments to both damage and reload speed. Overall, it is a more efficient weapon.

DEVELOPER COMMENT: Like the Crossbow, the Devastator had major issues with the projectile reticle so we changed it to use a normal static reticle. There are many adjustments planning (we see you BANDIT ARMOR USERS)… but for now, this should feel much better.

DEVELOPER COMMENT: For the final boss weapon, this felt a tad underwhelming. The goal of the Repulsor was to be a well-rounded tool that can fit on any team. By reducing the initial spread and increasing the post-shot decay speed, we’ve made it more reliable as a primary option. Additionally, we increased the debuff to 4 seconds so that players can easily unload all 5 shells into a post-banished enemy. The Banish time was reduced to reduce the waiting and halved against friendlies, because every team has “that guy” on it. To adjust for the upped effectiveness (as well as higher +20 scaling) we reduced the total Banish charges from 8 to 5.

DEVELOPER COMMENT: We’ve removed the Weakspot requirement because not every enemy has a Weakspot and because it already has a pretty strict range requirement. We will monitor the change and adjust both range and damage value accordingly.

DEVELOPER COMMENT: The range requirement has been made more forgiving and the damage bonus has been increased significantly. We will monitor the change and see if players find the Scrapper armor more appealing as a close-range set.

DEVELOPER COMMENT: We fixed a bug that was granting players ALL crit chance when perfect dodging. We also removed the raw melee damage buff and replaced it with melee speed to better facilitate an in-close melee style. Most notably, any perfect dodge (even with only one piece) will grant 100% crit chance (which is still a 50% minimum damage increase).

DEVELOPER COMMENT: We’ve changed how this set works. The original benefit (chance to not use a Dragon Heart) was not as appealing as we had hoped (especially for a full armor set). We swapped the effect with the Mender’s Charm so that Dragon Hearts now heal teammates. This makes the Elder Armor an excellent support option.

DEVELOPER COMMENT: Players asked for it, we obliged. Enjoy having lots of health.

DEVELOPER COMMENT: Since we have removed the interaction between Catalyst and Devouring Loop, Catalyst has been reverted to its pre-nerf state.

DEVELOPER COMMENT: To better allow the Akari Armor buff to be meaningful, we reduced the Rapid Strikes bonus.

DEVELOPER COMMENT: The Devouring Loop was never meant to work with the Catalyst Trait as it is not a status effect but we thought it would be a cool/fun idea. Spoiler alert: We all make mistakes.

DEVELOPER COMMENT: With the recent shift of Elder Armor bonus and Mender’s Charm, we wanted to give each of these items a proper focus. Cleaning Jewel is now focused around status buildup and cleansing, while Mender’s Charm is all about healing.

DEVELOPER COMMENT: Due to the change in how summons work, we wanted to allow players the opportunity to still have more summons than the base game would allow so we added functionality to the Soul Anchor. This does not add additional charges, but it does allow you to have more than the “max” out at any one time.

DEVELOPER COMMENT: To better allow the Akari Armor buff to be meaningful, we reduced the Adrenaline buff so that melee speeds didn’t get out of hand.

DEVELOPER COMMENT: We’ve converted all Mods to properly scale with weapon level. Typically they start lower than their original base but scale higher – thus, you get a bigger benefit out of slotting them in higher-leveled weapons. We’ve also made a change to how summons work so that there is a cap on simultaneous instances. If the max is reached and a new summon is activated, it will destroy the oldest. The max simultaneous can be increased with Soul Anchor.

DEVELOPER COMMENT: Rattle Weed has always been “too good” in a game that has a lot of enemies that you are expected to deal with. We didn’t want to change the core concept of the mod, but we did want to reduce how overpowered it was. We increased the buildup so it takes just a bit longer to fill. We reduced the initial aggro “pulse” by a significant amount so it didn’t lock enemies on it until death (this allows you to pull enemies off now with damage). We also added a constant “pulse” that will pull newly spawned enemies towards it assuming you do not already have too much aggro. Additionally, when a second Rattle Weed is summoned, the first one is immediately killed. Previously, it would stick around for 5s and hold aggro which made it even more effective than it should have been. Players can still summon 2 Rattle Weed if they use Soul Anchor.

DEVELOPER COMMENT: No longer breakable while active, Veil of the Black Tear should now do the job we all thought it should be doing from the beginning.

DEVELOPER COMMENT: We wanted to make Swarm a sort of “buddy” that followed you around and attacked anything dangerous. However, there is a bug (no pun intended) in this patch that keeps the duration to 12s. It’s known and will be fixed in the next patch. However, look forward to double duration in the future. Putting this note here because we know players will see that it says 25s and is still only lasting half that duration.

DEVELOPER COMMENT: Reverted the reduction of charges. We want players to feel more like a caster with Breath of the Desert. With 3 charges, we may eventually need to adjust the damage. For now, rest assured that we will never again change the total charges of Breath of the Desert (unless we do).

DEVELOPER COMMENT: General behavior and bug feedback. The goal is to clean up the rough edges and make the fights less exploitable and more consistent!

DEVELOPER COMMENT: Some players found the Nightmare breakout phase to be tedious so we reduced the breakout threshold and increased the total health (by double). This is so that players can more consistently get to the “fun” part of the fight which is seeing massive numbers. We also reduced the variance of the breakout phase (for consistency) and increased the total amount of DPS time when broken. Also… some bug fixes.

DEVELOPER COMMENT: The Wasteland Goodboy has been an extremely good boy since launch day and we felt it only right that he got some quality play time. We’ve been working on setting up a play date with Earth Goodboy but have yet to find him.