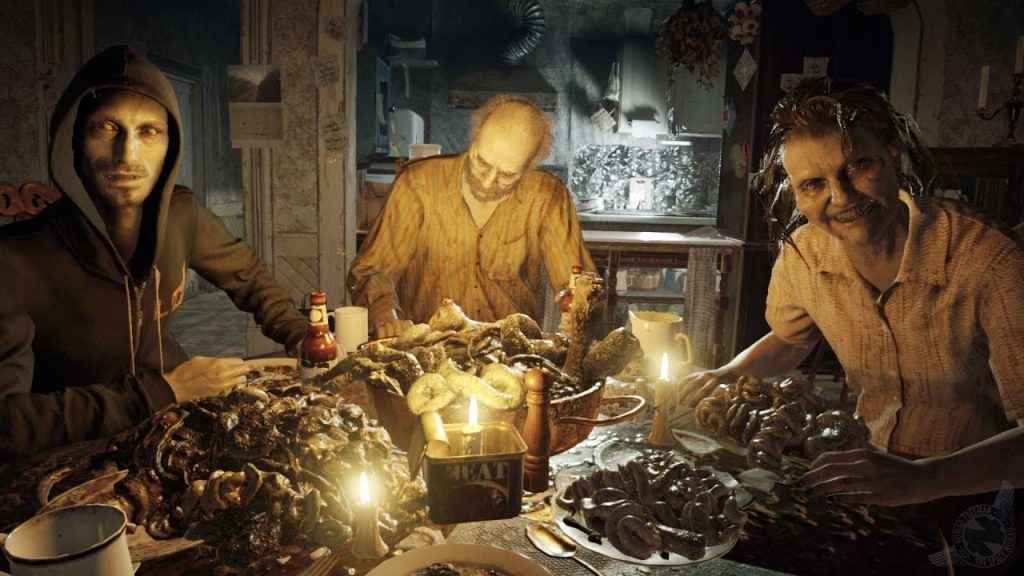 Here at PlayStation Universe, we are huge fans of things that go bump in the night. Some of the best PS4 horror games have brought out some of the most memorable experiences in gaming, from the dog bursting through a window in the original Resident Evil to Xenomorphs stalking you in Alien: Isolation.

So, to commemorate the season, the PSU staff has decided to share some of their scariest moments in video games. Read on if you dare.

I was in my cousin’s basement, watching him as he popped in his Blockbuster rental of Condemned. At the time, it was his life goal to scare me out of my sheltered upbringing, a tactic that often backfired. To his credit, though, I was a rather jumpy teenager. I joined his game session while he wandered around in the game after dark.

He came across an abandoned house in a valley, which is when he started making snarky comments about how he shouldn’t go in there for fear of his life. So of course, he did.

He made his way through each room on the main floor, but apart from a general disarray in the darkness, he found nothing. He then had the option to either check the basement or the attic, and after a quick glance down the stairs that soon disappeared into the basement black, he decided on checking the attic instead. The entire top floor was unfinished, walls and floors all wood framework with darkness at each edge.

Before exploring the floor, he looked down what we believed was a laundry shoot. Nothing. He moved on, finding the same uneventful nothing he found on the first floor. On the way out, he said, “If I check that damn laundry shoot again, something will pop out at us, I’m sure of it” (I paraphrase).

He looked down it, wood turning to empty black, and he began another round of snark as he backed out to leave. As he turned away from the shoot, something that we never identified exploded out of it, causing my cousin to, in one move, fling his controller at his TV and jump clear over his couch, spitting out random adornments of profanity between a bunch of nopes.

Never since then have I been both terrified and brought to laugh-crying in one gaming moment – Tim Nunes.

My “best” horror memory would be when playing Amnesia: The Dark Descent. Playing it at night with headphones on in the complete dark really did it justice for me and made me realize that horror games just may not be for me.

The atmosphere of the game together with the fact that your character literally goes insane if you don’t have light around you for quite a while made it a solid experience for me. Just anytime you are walking around and trying to find your way if out of nowhere a monster pops up. A lot of those times I ended up with a loud scream – Kevin Rombouts.

For me, Resident Evil 2 will always be synonymous with Halloween – despite its release in Europe landing in around April of 1998 rather than the month of ghouls and ghosts. It wasn’t until a couple of months later that I, being the tender age of seven, was able to sneak a glimpse of its grisly undercarriage at a friend’s house, (who, naturally, wasn’t of a suitable age either), and from that moment onward I was hooked.

Between gates being burst open on a basketball court to a foot grab at every turn, Resident Evil 2 has embedded itself as the premier showcase for when the month of October rolls about – and simply nothing will top it – Adam Byrne.

I was a massive fan of the sci-fi horror mashup that was Dead Space. After the zombie fatigue that yet another Resident Evil release stoked, the tense psychological build up of Dead Space felt like another experience entirely.

The visceral dread I felt wandering those hallways watching for any signs of movement, was matched by the genuine panic I felt as those shapeless horrors would eventually appear, lurching down the corridors towards me with their pinwheeling scythe-arms. I had played the game so much that for weeks at work, I couldn’t go into any room without automatically taking stock of the location of every air vent or grating.

Once, maintenance was doing some service work in the washroom and had removed several of the suspended ceiling tiles. I literally had to change urinals, because standing under the open ceiling made me too uncomfortable.

You have no idea what kind of PTSD flashbacks I had playing Dead Space 2 when I realized I had to go back aboard the USG Ishimura – Jack McCaskill.

“Resident Evil 4 has been one of my favorite games of all time. It’s a pinnacle achievement in survival horror design. It is also one of the only games that have managed to leave me terrified during its release across three generation of consoles (PS2/PS3/PS4). My favorite horror moment in RE4 happens when Leon is trapped with Salazar’s ‘Right Hand Man,’ the horrifying looking creature that’s after the player.

It didn’t matter that I had played through the part on PS2 back in late 2005, as it successfully managed to scare the living daylights out of me during my most recent playthrough of the game on the PS4 remaster. You dun scare me, RE4!” – Prashnanth Narayan. Resident Evil 7: In a game that’s stuffed with more horrific moments than an Impact pay-per-view, I’m pretty much spoilt for choice about which one to pick for this feature. Nonetheless, one particularly toe-curling scene stood out for me; specifically, the scene where you find yourself brought to dinner at Chateau De Baker and are forced to chow down on some, shall we say, unsavory foodstuffs that look like they fell out of a toxic waste disposal truck.

Playing this sequence in VR, I somewhat naturally had a job to keep my own food down, as it attempted to violently escape up and outwards through my gullet in what would have been a colorful, though ultimately smelly spray of my earlier meal onto the television screen – John-Paul Jones. My most memorable horror moment in games did not come from a game itself–rather, a trailer. Imagine: you are six years old, still experiencing PlayStation with wide-eyed wonder. It’s your first video game console, and for all you know, the entire gaming landscape consists of Spyro, Crash Bandicoot, and a super adult-feeling game called Metal Gear Solid.

Eager to experience something forbidden, you pop in your PlayStation Interactive Sampler Pack Vol. 8 — the demo disc that came with your console — and scroll through the menu. Metal Gear Solid looks complicated. Rugrats looks like a ton of fun! Just past Rugrats lies something called Parasite Eve.

For the next three minutes, I was entranced and horrified by this trailer. It’s positively quaint today, and Squaresoft diehards will recognize a CG art style highly reminiscent of the PS1 Final Fantasy games. But at six, I was struck with a surreal terror at the sights.

An opera house of people, burning. A gelatinous, diseased corruption spreading rapidly, seemingly unstoppable, warping and bringing to evil life the things we thought were safe. The military’s utterly futile efforts to contain this. It was psychologically haunting and the first time I realized games could scare – Kyle Prahl.

My most memorable horror moment in a video game was when Silent Hill 2 first released. I decided to play the game with my cousin. The tension of Silent Hill 2 really got to me and I hardly ever ran in the game. I always moved slowly because the fog in that game was so dense.

In the distance, I saw one of those monsters that looks like they are in a straight jacket walking across the street and then suddenly disappears in front of a car. I slowly approached the car looking around for the monster when suddenly it just bolts out from underneath the car. I got so scared that the controller flew out of my hand and flew into my cousin’s face who was sitting next to me. It’s a moment that I definitely wouldn’t forget – Garri Bagdasarov.

I don’t think any game really got to me like Alien Isolation.

I grew up both fascinated and horrified by H.R. Giger’s elegant, yet intimidating xenomorph, but no game featuring them had ever felt like they properly represented the alien’s power or intellect. Then Alien Isolation came along and early on, it taught me to fear the xenomorph once more.

A while after the alien had made its first proper appearance, I was edging around the corridors of Sevastapol, occasionally flicking up the motion tracker nervously. I happened upon a room of survivors, and they didn’t sound especially pleased about the idea of meeting new people. So I snuck around, trying to figure out how to get past them without causing too much fuss.

I failed at that. And one poor sap decided to fire off his gun. I scarpered because I knew what came next. I rushed into the next corridor, praying I got out before the xenomorph showed up and massacred everyone (even if it did solve my problem) I was on such an adrenaline kick I’d almost failed to notice the viscous mucusy substance dripping from the air duct opening that was about to be overhead.

I was quick enough to hesitate from pure shock at not considering the beast could have been here, but not quick enough to escape the lurking Xeno’s long-fingered grasp as it pulled me up into the opening and ended me in swift and brutal fashion. One of my favorite horror moments in gaming was from Outlast’s Whistleblower DLC.

I had wandered into what looked to be an abandoned warehouse. There was a grotesque display of what used to be a man…woman? It looked as if it had been torn apart and sutured back together as a warning, or perhaps a greeting.

I made my way deeper into the rust and stone beast, seeing table after table of old sewing machines and countless shelves of boxes. I heard speaking, the soft ramblings of a madman talking of marriage and beauty.

I ducked into an office, under a desk, standing up only to be greeted by the end result of a drunken car crash with Gomez and Lurch from the Addam’s Family and Buffalo Bill from Silence of the Lambs. He called me his “darling.” I don’t know how long I ran, but I remember falling into an elevator shaft. I hurt my foot, couldn’t escape.

I woke up on a sawmill table, seeing his life’s work in person. He caressed me, told me I would be beautiful once he removed my “vulgar” appendage. One of his victims survived, struck him from behind, inadvertently saving me in the pursuit of his own revenge.

I ran some more.

I ran into his trophy room. A gymnasium full of bodies. I heard him coming for me.

His other victim had failed, and I could either succeed or die – Chris Devisser.

The Exorcist: Legion VR is the single most frightening game I have ever played. There is a moment in the fifth chapter of The Exorcist: Legion VR that caught me completely off guard and made me absolutely lose my mind. I’m not going into specifics, because I don’t want to ruin it for future players, but I will say that for a few seconds, I forgot that I was in VR, and I was filled with a very real, very visceral panic.

Overcome with the need to escape (and forgetting that I was seated), I physically scrambled away from the figure that I felt was certainly going to kill me. And I quite literally tipped over backwards in my chair, crashing to the ground in a heap.

What are some of your scariest video game moments? Tell us your stories in the comments below!!