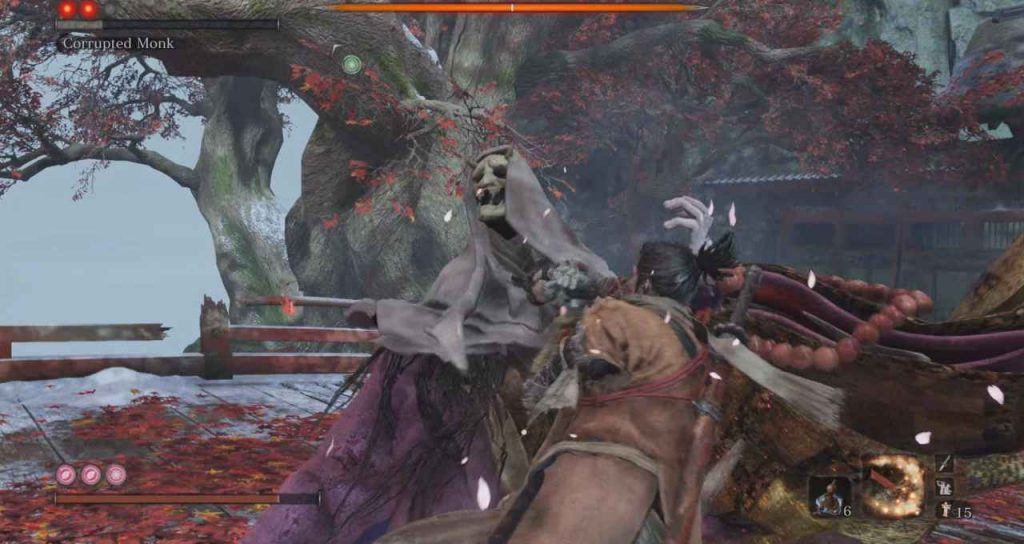 The Corrupted Monk is the first boss you fight as soon as you reach the Fountainhead Palace area of Sekiro: Shadows Die Twice. He can be found as soon as you have interacted with the Palanquin in the Ashina Depths.

This fight is a tough one, as in the final of his three phases, he becomes incredibly erratic. However, he is beatable and this guide will show you how to beat him.

The Corrupted Monk has three different phases. The first phase is all about deflecting sword attacks and attacking as he is recovering. Bring your Firecrackers as they are useful for the first and third phase of the fight. Use your firecrackers at the end of his attacks to get a few hits in.

At the start of the fight, you want to run up to the monk. You will get knocked back; but, if you hit circle, you can get back up and hit him a few times.

His standard spear swings should be deflected.

If he spins around and slams his spear in an overhead strike, you can not deflect it. Instead, you need to dodge to the side.

If he jumps towards you in the air and swings his spear from behind him, you want to dodge to the right twice to avoid it and get a few hits in. His second jump attack has to be deflected. If he jumps and lifts both arms in the air, he is about to perform a sweeping attack from left to right. For this, you want to deflect as the attack lands. If you are at a mid-distance from him, he can do a Perilous thrust attack. You can dodge this; however, you should use the Miriki Counter. This attack can also come at the end of a standard sword combo.

His other Perilous attack is a sweep. This is signified by him holding his sword to the side. Jump over this and deflect the following attacks.

Finally, he can do a swipe downwards as he steps backwards. You can dodge this by moving to the left slightly.

That covers all of the attacks in this phase.

Once you perform a deathblow you will start phase two. At the start of this phase, he will summon a cloud of smoke and disappear. He will then spawn a bunch of copies of himself. You will want to jump up the trees above him. If you do this quick enough, the Monk will spawn in the middle of the bridge. You can then jump onto him and perform a Deathblow. This will skip the entire second phase.

If you do miss this, then the second phase is exactly the same as the first, except the Monk will occasionally spawn the copies of himself. If he does this you can try and jump onto him for the Deathblow again. In the third phase, he will grow a millipede out of his neck. The biggest difference in this phase is that the Monk is incredibly aggressive. He is relentless and will constantly be preparing an attack or attacking. This gives you very little time to heal.

One of his new attacks involves him spitting millipedes at you. This will cause terror damage when you are hit by it. You want to dodge this to the right and get a few hits in. This attack is signified by the Monk resting his sword against his side and the Perilous symbol popping up.

In this phase, if he grabs his spear with both hands and holds it behind him, he is about to do a five slash attacks. If you have enough room, dodge backwards. But, if you are close to him, deflect all of the attacks and get a few hits in at the end. If you are at a mid-range from the Monk, he can perform a lunging sweep attack that will carry him forward. You can jump over the attack and get a few hits in.

He is also extremely hard to stun in this phase. After a couple of hits, he will continue to attack and not get stunned.

He also has another jump attack, this attack involves him spinning his spear three times. You can dodge this by moving to the right, underneath the Monk.

Overall, the goal here is to get hits in as he is recovering from attacks. Eventually, you will learn what to dodge and attack. Make use of your Firecrackers, to get a few hits in.

Once you have defeated him, you will finally have killed the Monk.

Our guide of the Fountainhead Palace area is now live. Check out all of our Sekiro coverage here.