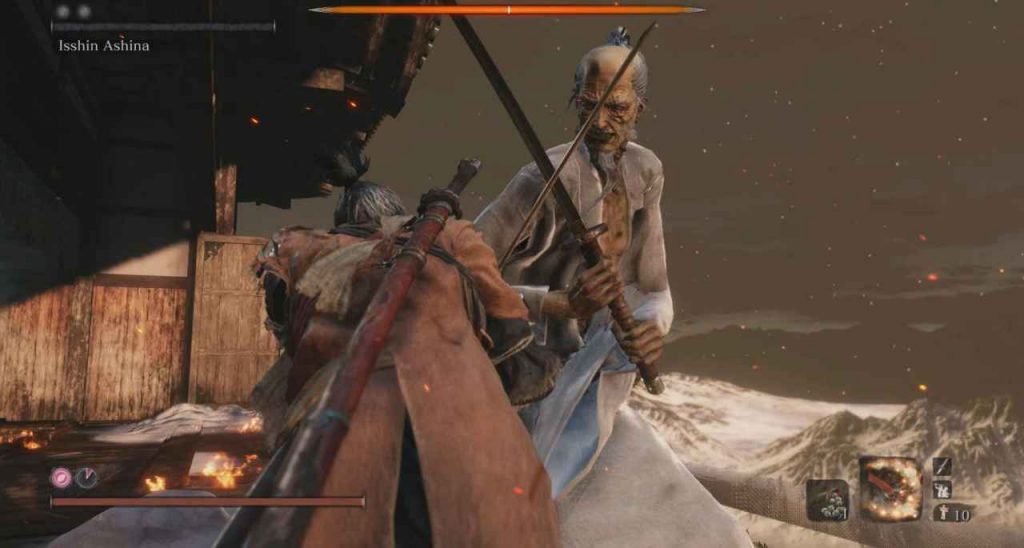 Isshin Ashina is the final boss in Sekiro: Shadows Die Twice. If you choose to forsake Kuro and go for the Shura ending. He can be fought at the top of the tower in Ashina Castle.

Isshin has two phases, with a third phase where you fight Emma, coming before fighting him. He is not very aggressive and has a couple of moves that are incredibly devastating.

The only thing you need to bring to this fight is the Firecrackers Prosthetic Tool.

The first phase has you fighting Emma. The key to defeating her is to deflect and dodge her attacks, only countering with a couple hits of your own. After she finishes combos, you can keep up the pressure with a few attacks of your own.

If she steps backwards and holds her blade behind her head, you want to run backwards until she finishes the combo. It takes some time to learn the range of this combo. However, running away from this allows you to get a few hits in once she finishes.

If you are close to her and feel as if you cannot run away, you can also deflect this combo. If the Perilous symbol appears and she holds her sword by her head, she is about to perform a thrust attack. You can dodge this to the side. However, you should try to use the Mikiri Counter on it.

If she holds her sword to the side, bends down, and the Perilous symbol appears, she is about to perform a sweep. You can dodge this by stepping back once and then attacking once or twice. If she sheathes her sword, she can perform a devastating swiping attack after lunging forward. She can also do a step forward just before she attacks, extending her reach even further. The way to dodge this is to run backwards and then loop around her in a wide arc. You can get a couple of hits in as she is recovering.

If she sheathes her sword and twirls her hands, she is about to perform a grab attack. You want to do the exact same thing. Run backwards and loop around her in a wide arc, hitting her a couple of times as she recovers.

Eventually, you will have her down. Now, you can move onto Isshin.

This first phase of Isshin is all about deflecting.

Similar to Emma, all of his regular sword attacks should be deflected.

If Isshin is standing still, he will immediately dodge your attack and follow up with his own. Therefore, you only want to attack once, as you will get caught in his attack if you hit him multiple times.

If he steps to the side and the Perilous symbol appears, he is about to perform a thrust attack. You can dodge this by stepping to the left. However, you should try to Miriki Counter it. You can follow that counter up with an attack. If he holds the blade in both hands above his head, he is about to perform an overhead swing. He can follow this up with another overhead swing directly after. You have two options here. You can run backwards and dodge both attacks or you can risk it and deflect this attack. Your timing has to be exemplary here, as if you miss the deflect he will hit you with both attacks almost, if not, killing you. If you do deflect it, you can attack a few times.

When you are attacking and you hear a clap and see an orange aura, he will attack once and perform a Perilous thrusting attack. Deflect the first attack and then Miriki Counter the thrust. If he sheathes his blade, you want to run backwards and in a large loop around him to dodge the swiping attack.

If he sheathes his blade and a Perilous symbol appears he will perform a sweeping attack. You can dodge this by running backwards.

He also has the same Perilous grab attack as Emma. Therefore, you want to do the same thing. Run backwards and hit him as he recovers.

That covers all of his moves in phase two. In the third phase, he can perform all of these moves above; however, he performs his new attacks much more often.

If he lifts his blade above his head, holding it in two hands, you need to run behind Isshin and deflect, just-in-case his blade hits you. Once he swings the sword, you can attack once or twice.

If Isshin slams his foot into the ground, you need to run around him in a large loop to dodge the attack. You can get some hits in after he shoots out the fire stream. If he bends down and holds his sword low, you want to run away from him as fast as possible to dodge his swipe and the fire. This attack is rare and tends to only occur after his thrust attacks that you don’t Miriki Counter.

If he crouches and starts growling, you need to get close to him and use your Firecrackers. This will stop him performing this attack, which is a devastating multi-combo. Eventually, you will have him down.

You can check out all of our Sekiro coverage here.