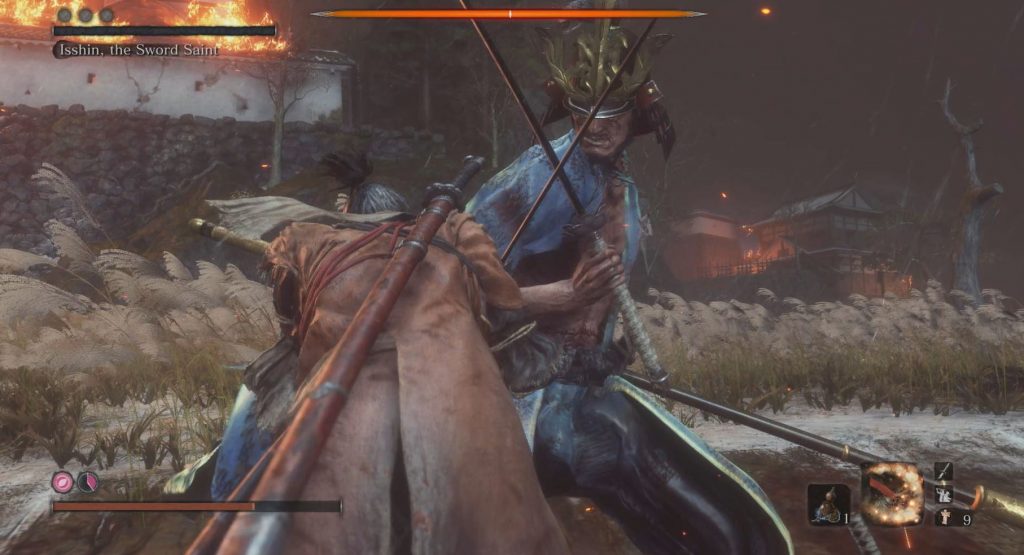 Isshin, the Sword Saint is the final boss in Sekiro: Shadows Die Twice. He can be accessed from the door in the Ashina Reservoir, where you fought Genichiro at the start of the game.

He is an incredibly challenging fight, testing your proficiency in everything the game has taught you up until now. This guide will take you through all four of his phases and the best defence for each attack.

The only thing you will need for this fight is the Firecrackers Prosthetic Tool. I do recommend having upwards of eight Healing Gourds, due to how long this fight is.

The first phase is a modified version of Genichiro from the fight earlier. His combos are the same, as well as his bow attacks. The only thing is that he won’t jump into the air and shoot five times.

He will always start the fight with a slicing attack from the Mortal Blade. You can easily dodge this by looping behind him, or running around him at a distance, and rushing in for an attack once he has finished. He can follow this up with another Mortal Blade attack. This one will be an overhead slash, which can be dodged. If he runs in a little circle, he is about to do a sweeping attack, which can be jumped over.

Any time he pulls his bow out, you want to hit him, and attack two or three times. This is because if he hits you with the bow, he will immediately follow it with one of his two Mortal Blade attacks.

When he jumps in the air, you can dodge to the side. You will want to dodge backwards straight after as he can follow this up with either a grab, sweep, or thrust attack. It is really tricky to predict which attack he is going to do, which is why you want to dodge back a second time.

He can also do a normal thrust attack, which can be parried using the Miriki Counter.

That covers his first phase. The biggest thing here is to learn his attacks and get into a rhythm. You will want to try and take as little damage as possible in this phase.

Now, during phase two, Isshin, the Sword Saint will emerge. This is where the fight really begins. The best strategy I found is to loop him into a couple of attacks and punish him as he is recovering. You will want to be at a medium-close range from him.

He will often dash towards you and swipe his blade once, deflect it and move backwards. This allows you to fully prepare yourself for when he recovers. You can deflect these attacks; however, I found that he tends to do at least a three hit combo, and both of his subsequent attacks will miss. You can then follow up with a few hits.

If he sheathes his sword and it glints for around a second, you will want to run in a wide loop around Isshin and go in for a few attacks after he has lunged forward. He will always miss you and you will always be able to punish this attack. Staying at mid-range causes him to do this attack quite often, which allows you to get a lot of damage in. At any point, he can also do a very quick Perilous slicing attack. You can always dodge this by running left.

If you are attacking him, and he is deflecting he will follow up by kicking you. When he does this, and any time he kicks you, he will immediately follow up with a Perilous thrust attack which you want to punish with the Miriki Counter. This is another attack we want him to do a lot. You can get him to repeat this attack fairly often by clashing blades with him after he attacks you.

If he dashes towards you at an angle and you see a wind effect gathering in his sword, you want to run away. Get as far from him as you can, as he is about to perform a spinning attack that has a lot of range.

If he lifts his blade with both hands above his head, you want to dodge just at the last second, before he attacks. You can get a few hits in after this. If you do not feel confident doing this, you can deflect it; however, he will follow up with a second attack that is the exact same. This will do a lot of posture damage though. He has one more attack in this phase. If wind gathers in his sword and he does not have it sheathed, you want to run around in a similar wide loop to the other attack. He will send out a burst of energy in a straight line, with another following up a second after. Once that second attack has ended, you can punish him with a few hits.

You want to keep up the pressure in this phase, whilst still maintaining a distance. This will allow you to punish the attacks that he charges up, getting hits in. This phase takes a while to learn. Eventually, you will want to be able to complete this and the first phase without taking too much damage and having almost all of your Healing Gourds still intact.

During phase three Isshin’s attacks are almost entirely different. During this phase, he uses his spear for the majority of the fight. However, he can do a few sword attacks.

The strategy here is to stay slightly further away and abuse his jumps by getting behind him and hitting him once or twice. He will frequently do a thrusting attack as well that has quite a forgiving range. You will want to use the Miriki Counter often here.

Whenever he swings his spear around him, you want to deflect and back away as he can do a number of different attacks. If he does his three-hit combo, the subsequent two attacks will miss you if you are far away.

If he does a second large sweep and a number of other attacks, he will follow this up with a Perilous thrust attack. You will want to punish this attack as much as possible as it is easy to Miriki Counter. You can also be out of range, dash into the thrust and still get the Miriki Counter off. However, if you fail to do the counter, you want to immediately dodge to the left as he can pull the spear back out and catch you in another combo which will most likely kill you. After the Counter has finished, immediately swing your sword once to get another hit in.

Isshin has a gun he can use in this phase. He can run towards you and fire four times. This can be blocked or dodged. he will follow that up with a swing of his spear. He can also fire his gun four times after finishing a dash attack. You should be able to block this, as you should be far enough away from him.

Any time he slashes with his sword, you want to deflect and then run backwards a little. He will dash past you and then come running back and jump at you. This overhead slam can be easily dodged by stepping to the side underneath him. You will want to punish this as well to whittle his health down. He also has a standard sword attack, which he follows up with a leap back and a swing of his spear. You can deflect both of these attacks or deflect the sword attack and dodge backwards to avoid the spear. He can also use his gun after this attack, shooting four times or one larger, deadlier bullet.

He also has a large Perilous sweeping attack that can be hard to identify. Ideally, you should be far enough away to avoid this attack even if he does it. It is important to differentiate the difference between this and a thrust attack. He will always do a thrust attack during a combo, which is where you want to punish it with a Miriki Counter. The sweeping attack will often occur on its own and not be a part of a combo.

If you are close to him, he will often follow up with a different sweeping attack. Wind will gather in his spear and, after around a second, he will sping it around. As soon as you notice the wind, immediately run away from him. After the attack finishes, you can rush in for a hit or two.

The key to this phase is to take it slow, stay as far from him as possible and counter the thrusts and jumps. If you do find yourself close to him, deflect his first few spear or sword attacks and back away to avoid getting caught in a combo. This phase also takes a while to learn. So, don’t be disheartened if you are struggling, as this phase is radically different from his last two.

The fourth phase of Isshin is virtually the same as the third. However, he can do two lightning- based spear swings on top of all the other attacks mentioned above. We will go over these first.

If he jumps up in the air and holds his spear diagonally, with the tip on the left side of his body, he is about to do a swiping attack. You can dodge through this by waiting a second from when he jumps and dodging to the left. However, this attack is difficult to dodge. You can get a few hits in after this.

His second attack is an overhead slam. This is much easier to dodge by stepping sideways. This attack is signified by him holding the spear above his head, with the tip on the right side of his body. The safest way to deal with these lightning Perilous attacks is to use the Lightning discharge effect. Once you see the red Perilous symbol, wait around a second and then jump into the air. When the attack hits you and before you land back on the ground, hit R1 to send the lightning back towards Isshin, stunning him. Here you can get two hits in. I didn’t actually realise this was a mechanic in the game until I had beaten him. Therefore, you will probably have an easier time doing this instead of dodging the attacks.

The only other new attack is another charged one. If wind gathers in his sword, he will do two slashes that track your position. You can easily dodge this by running around him and going in for a hit or two after the second one is finished, similar to the charged attack in phase two. Other than that, you want to use the same strategy as phase three. Bait him into doing thrusts and dodges. Punish them with hits and the Miriki Counter and attack when he is recovering or stunned by the lightning. This phase is incredibly hectic and Isshin becomes extremely erratic. They key is to keep your cool and learn his attacks. You can also use Firecrackers in this phase to stun him out of big attacks and give you more opportunities to deal damage.

Once you have finished him off, you will have finally beaten Isshin. Congratulations!

You can check out all of our Sekiro content here including a walkthrough for every boss and every area of the game.