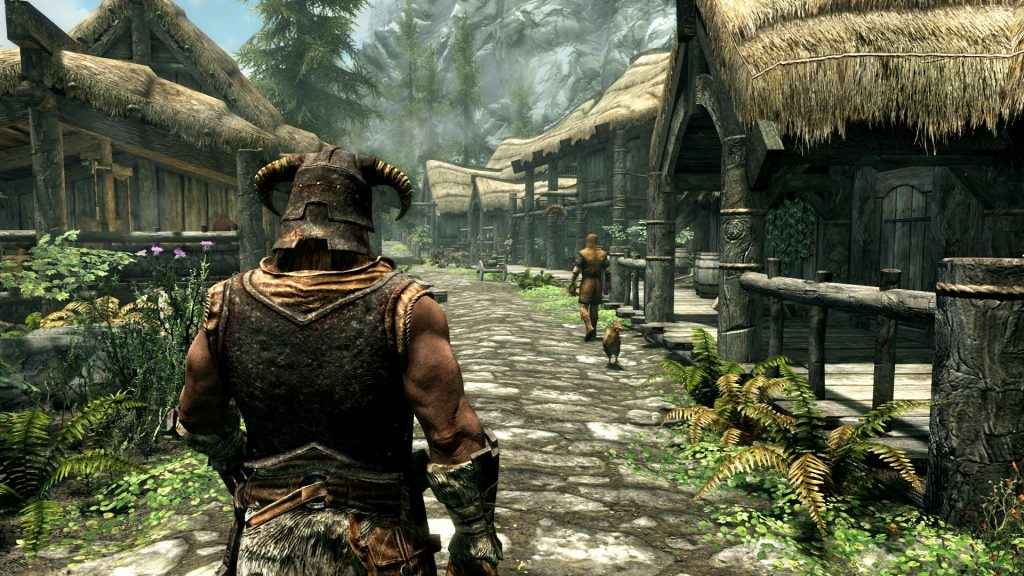 The promise of virtual reality has always been true immersion: to commit yourself and feel wholly within a video game world, no matter how large or complex. It’s only fitting that The Elder Scrolls V: Skyrim, the modern archetype for “large and complex,” goes the farthest toward fulfilling that promise. In the space between promise and fulfilled, however, the growing pains of VR still persist. If you’re willing to truly commit to this new style of play and a dizzying learning curve, Skyrim VR could be your killer app. Elsewhere, the seams of VR are visible in the biggest VR game yet.

For starters, the content here is staggering. 2011’s Skyrim and its three expansions–Dawnguard, Hearthfire, and Dragonborn–comprise hundreds of hours of adventuring. Revisiting the game was a reminder of just how coherent and well-realized Skyrim’s world is. I got a tactile pleasure from tucking inside mossy enclosures along the road, lifting and moving objects about town and physically looking between people in a conversation. Skyrim VR is at its very best during moments like this. You momentarily lose yourself to the presence of the game world and feel yourself inhabiting it.

Combat holds a similar power. Having your shield and sword arms synced up with PlayStation Move turns melee and magic showdowns into something instinctive–for brief flashes, a deep-rooted survival blood starts pumping. You’re often battling controls to do it; more on that in a bit. But realistically holding a shield in front of you while taking swipes at enemies, moving your arms in the subtle sort of ways that would protect your life or deal severe harm to foes. It truly transcends the well-worn feeling of slightly tilting the right analog stick to adjust your aim, or strafing with the left stick in janky, unrealistic ways to dodge incoming slashes.

That realism extends to mid-combat movement, but arguably in a negative way. By default, movement is performed by pointing the left Move wand and snapping to the position marked by an arc of sorts. I found this movement to be limiting and needlessly safe (though a total VR newbie might appreciate the easy entry with minimal chance of motion sickness). So I switched to “Direct Movement” pretty quickly, with allows total free movement by holding the left Move wand’s center button while turning with X and Circle on the right wand. In practice, it ends feel very much like old-school tank controls, and your options for strafing are highly limited. You can sort of do it by pointing the left wand straight up then tilting it side to side, but Skyrim veterans will quickly notice how rooted and stand-still Skyrim VR’s combat feels. There’s an unintended realism here–who among us will be rapidly shuffling left to right, swinging weapons while wearing 100 pounds of armor?–but it feels a bit stilted when so many of Skyrim’s encounters are built with easy movement in mind.

These physical elements of playing Skyrim VR can make it a tiring experience. The combination of swinging and surviving while standing can cause general fatigue far before the usual multi-hour Skyrim play session develops. Even sitting while playing can be fatiguing, as the game world surrounds you with sights and sounds that represent a dizzying number of things you could run off and do.

Thankfully, those sights are treats. Skyrim VR is one of the better-looking PS VR titles, with environmental density and character detail particular standouts. At times, its age shows in blurry, underwhelming textures, but the feeling of presence is maintained despite those brief intrusions. Besides, there’s VR magic here, nitpicking be damned. Skyrim’s game world, commoditized by millions of hours and thousands of videos, guides, and memes over the years, feels newly scary and uncertain as it surrounds you and towers over you. The journey from Riverwood to Whiterun isn’t a three-minute janky hop-skip over mountains as I skip the roads; it’s an endeavor that feels meaty as I take uncertain steps in this world.

The rewards to be reaped in the long-term are immense, but the controls put up a fight along the way. Of course, it’s possible to play Skyrim VR with a DualShock 4. Indeed, this might be the better way to introduce a casual gamer or VR rookie to the experience. The first few hours of learning controls and buttons will be a slog if you’re not already very familiar with the PS Move wands. Every button is used, which means far more button-pressing than most VR games bother with. I found myself fumbling (with my immersion broken) as I tried to remember what Left-wand-Square does, deduce how I accidentally started sneaking, and try again when scrolling through my inventory put the wrong thing in my hand. With time, you come to master these idiosyncrasies, but Skyrim VR demands way more time than most. Unlike most PS VR launch titles, it is exceptionally difficult to casually introduce and makes a somewhat poor first impression. ‘It’s cool,’ said the people I showed it to, sounding a bit dejected, ‘but I really can’t see myself playing the game this way.’

At the end of the day, I stand in the same camp. Skyrim VR is highly polished, rich with content, and the first VR game to approach the promise of inhabiting a massive, living world. But in the uncharted territory it claims, we are beset by a full-fledged control scheme applied to controllers that weren’t meant for it. On their own, the game’s controls are sporadically immersion-breaking yet learnable. But when they collide with game systems built atop more freedom and speed, like combat and inventory management, they turn an already demanding game into a journey that’s difficult for the wrong reasons.

At the same time, Skyrim VR is rife with incredible moments. There’s nothing else on the market like nocking an arrow and letting loose at the dragon high above you, or like standing amidst conversing people and feeling totally involved. Skyrim VR made me feel small and injected excitement into a world I thought had little left to give. But it’s the truly diligent adventurers (or the rare newcomer who hasn’t experienced any other way) who will hang around to take what this new, uncertain world is offering.