In what we hope is a massive mistake on the online store’s part, as of right now, you’re currently able to purchase early multiplayer access to Electronic Arts’ upcoming Star Wars Battlefront 2 for the eye-watering sum of $399.99.

Found on Microsoft’s official store right here, the product page – which shows prices for the U.S., U.K., and Europe amongst others –  is listed as ‘Star Wars Battlefront 2 Multiplayer Beta- Early Access’ and contains a description that says:

‘’Get a glimpse of the STAR WARS Battlefront II multiplayer universe, unmatched in variety and breadth where up to 40 players fight as iconic heroes, authentic-to-era troopers and in a massive array of vehicles on land and in the air – as battle rages through the galaxy.’’


‘’Team up with friends, with four unique trooper classes, and STAR WARS heroes and villains, each with unique strengths, weapons and abilities to unleash on the battlefront. Customize and upgrade your character, in immersive STAR WARS battlegrounds where you can master your own STAR WARS hero’s journey.’’ 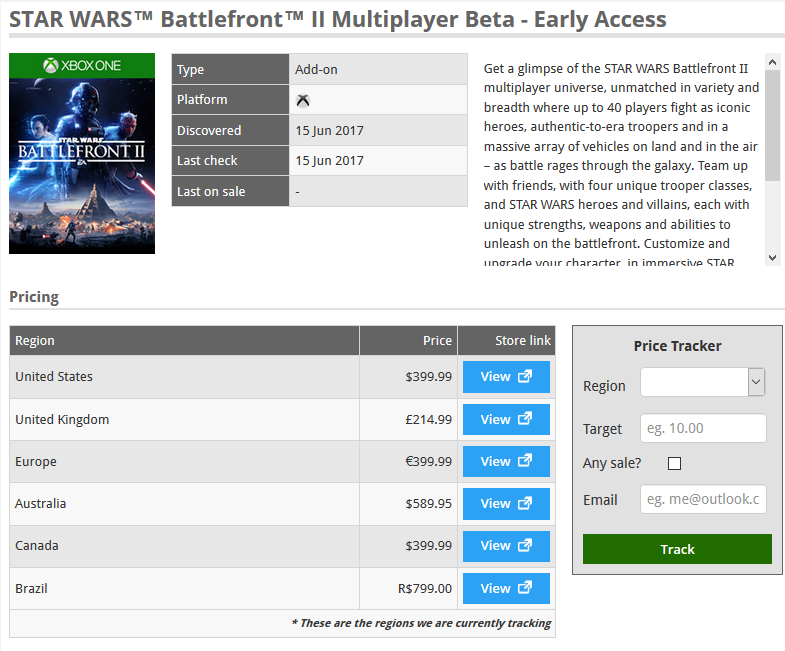 Not only that, but there’s a separate page containing the same price up live on Microsoft’s U.K. store, too. The price of £214.99 includes VAT, though – phew!

Near-definitely a mistake on the administration side of things, we’ll update this article once we know more. We’ve checked the Star Wars Battlefront 2 PS4 beta access and there doesn’t appear to be any such demands for cash.